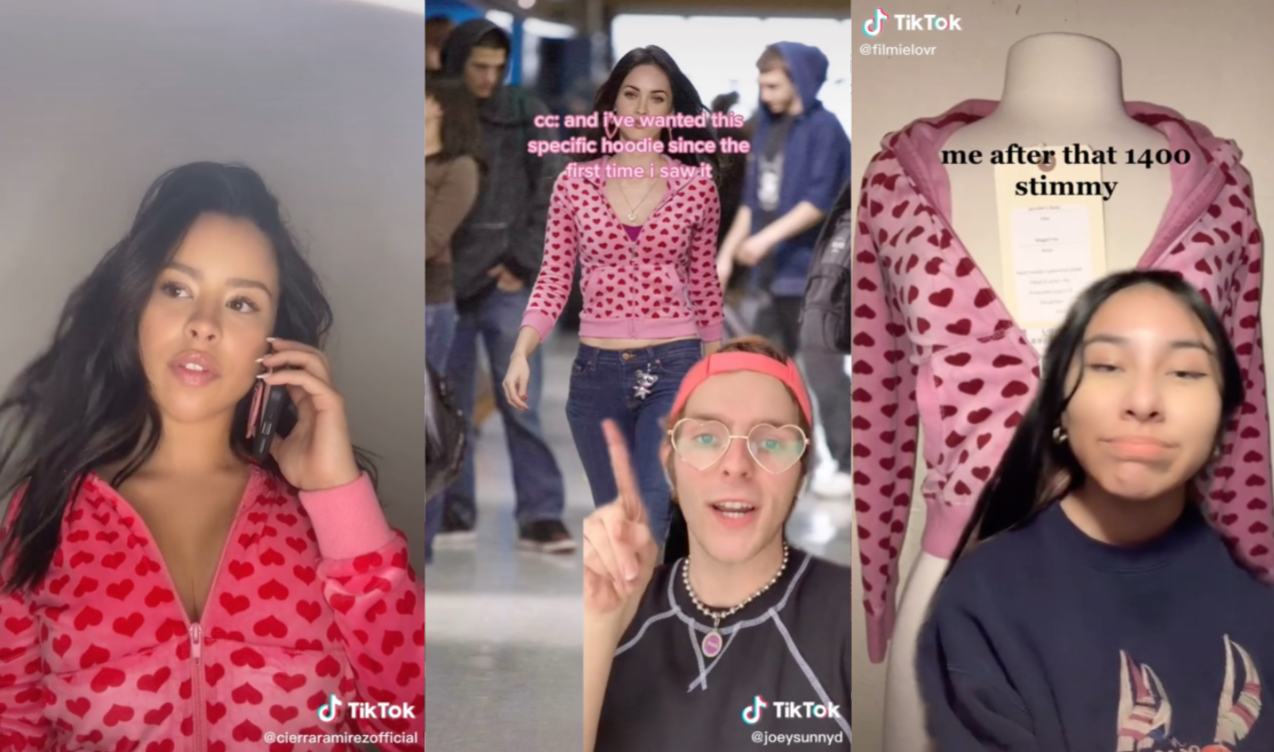 Gen Z is scouring the internet for the pink velour hoodie that Megan Fox wore in 2009 cult classic Jennifer’s Body, teen punk band The Linda Lindas signed a record deal after taking over everyone’s social feeds last week, TikTokers can’t get enough of this creator who makes fun of life hacks on the app, and diehard Friends fans are tuning into the special reunion on HBO Max—plus other news that took over social media this week! 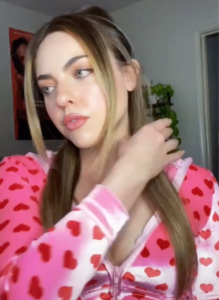 Gen Z is Obsessed with This Heart-Filled, Velour Hoodie from Jennifer’s Body
You already know the 2000s are a Gen Z obsession—and the latest Y2K-era clothing taking over TikTok is a velour hoodie from 2009 horror-comedy flick Jennifer’s Body. (In case you need a refresher, the movie is about a teen girl, played by Megan Fox, who is possessed by a flesh-eating demon and starts attacking the boys at her high school—and the fashion is pure aughts perfection.) The movie initially bombed at box office but has gained a cult following in recent years, and seen a renaissance during the #MeToo era. During one scene, Fox is seen strutting down the hallway donning a heart-print pink velour hoodie —and despite the film being twelve years old, this fashion moment is capturing Gen Z’s attention in 2021. The hoodie was initially part of a Gap Valentine’s Day collection from 2008, and vintage editions of it are currently “impossible to find,” but replicas and copycats have “proliferated” all over the internet. TikTokers have also been DIY-ing it, in some cases “haphazardly with red Sharpie and heart-shaped stencils.” Interest in the hoodie began to “skyrocket” online earlier this year with some Redditors and Twitter users scouring the web to find the original Gap version. The original hoodie worn in the movie previously sold for $250, but an expert from an auction site estimates that it would now sell for between $800-$1,200, and up to $2,000. Some shoppers have reported buying the original versions of the Gap hoodie on resale sites like Poshmark and Depop, where it’s been listed for as high as $300. Online shops have also started releasing their own versions of the hoodie in recent months: Dolls Kill, who received “what felt like a million Instagram DM requests” for the item, released their own version of the hoodie (with matching pants) in January and sold out within a day. They restocked in April,  and sold out in a few hours—and are planning another restock for later this summer. Meanwhile, ‘00s-inspired fashion brand Fine Girl also debuted their version of the hoodie in January. On TikTok, the hashtag #JennifersBody has 201.2 million views, while #lovecore has 14.9 million views. 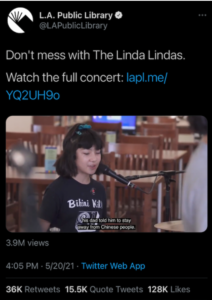 Last week, a half-Asian, half-Latinx teen girl punk band captured the internet’s hearts after performing their song “Racist, Sexist Boy” at the Los Angeles Public Library as part of an AAPI Heritage Month event. The band, the Linda Lindas, stars Bela Salazar, 16; Eloise Wang, 13; Lucia de la Garza, 14, and Mila de la Garza, 10—a tour de force of young talent. After the @LAPublicLibrary account tweeted the video of their concert, it received 3.9 million views as well as 128.4K likes and 36K retweets, and was reshared across many other social platforms. “Riot grrrl” also trended on Twitter once the video started to go viral. The library later shared that the video was their number one video across all their social accounts including YouTube and Instagram. Before singing their song, 10-year-old Mila introduces the inspiration for the song: “A boy came up to me in my class and said that his dad told him to stay away from Chinese people. After I told him that I was Chinese, he backed away from me.” Following the viral concert, the internet lauded the young teens’ for their performance and they even got praise from former Rage Against the Machine member Tom Morello, who tweeted “Song of the day!” Then, over the weekend, it was announced that The Linda Lindas signed a record deal with Epitaph Records. Prior to their viral fame, they opened for bands like Bikini Kill, have shared a stage with the Dils, Best Coast, and Alice Bag—and have already worked with Netflix: They wrote the song “Claudia Kishi” for the The Claudia Kishi Club documentary, sang two covers for Big Mouth, and performed in Amy Poehler’s movie Moxie. 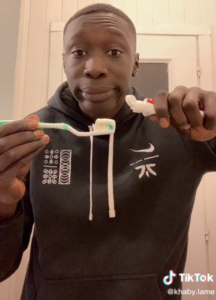 This Creator is Taking Over TikTok For Calling Out “Bad Life Hacks”
The internet and TikTok is full of “over-the-top” life hack videos—and one creator is revealing how bad many of them actually are. Italian TikToker’s Khabane Lame, whose @khaby.lame account has 61.7 million followers,  posts videos (which he captions in both Italian and English) that highlight “how impractical and useless most life hacks can be.” The 21-year-old typically showcases the original “life hack” video, which he combines with his own simple “version” of hack, and follows up with a shrug, or deadpan and SMH reactions. For example, one of his most recent videos calls out a “pizza hack” where the original creator uses the “mini table” in the box as a way to cut the pizza (receiving more than 180.6 million views), while another makes fun of a “toothbrush hack” that involves cutting off the head of a toothbrush, drilling holes in it, and attaching a syringe as a way to make the toothpaste automatically come out of it (racking up 62.8 million views). Lame’s videos have been blowing up, and he has earned over 15 million new subscribers in the last two weeks according to Social Tracker, giving him a follow count that surpasses popular TikTok creators like Jason Derulo, Loren Gray, and Dixie D’Amelio, and could put him on the level of stars like Charli D’Amelio and Addison Rae. We recently told you about BIPOC influencers to follow, and Lame is certainly one to keep an eye out for—and he’s already gotten some brand partnerships. Earlier this week, Barilla teamed up with the rising influencer for their parody version of “Funkytown” to coincide with the #EatABowlOfRigatoniPastaOnMay242021 hashtag, which has been trending on the app this week. The branded video currently has 19.5 million views, while the hashtag has 87.2 million views. 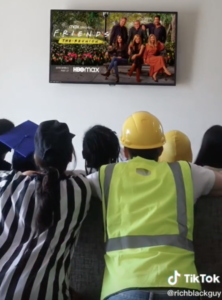 Friends: The Reunion Is Here & Fans Are Beyond Ready For It
We told you about how excited people were about the Friends reunion when it was first announced more than a year ago—so you can imagine how much hype has built up in the time since. After a few filming delays due to COVID, the Event finally premiered on HBO Max this Thursday and fans are loving it, causing Friends (a show that has been off the air for more than a decade) to trend everywhere once again. The sponsored hashtag #FriendsReunion is trending on both Twitter and TikTok, where it currently has 3.1 billion views. The nearly two hour special reunion, hosted by The Late Late Show’s James Corden, brings together the original cast for the first time since the series finale—and features everything from trivia with the original cast, table reads of the most memorable episodes, newly revealed behind-the-set secrets, and appearances from various guests like Malala Yousafzai, Reese Witherspoon, Justin Bieber, Mindy Kaling, Kit Harington, Cara Delevingne, BTS, and Lady Gaga, who performs a remixed duet of “Smelly Cat” with Phoebe (a.k.a Lisa Kudrow.) Brands have also taken advantage of the excitement around the reunion: Ulta Beauty and Revolution Makeup have launched Friends-themed makeup sets, Red Lobster cooked up dishes inspired by the show, while LEGO debuted new sets modeled after the iconic NYC apartments. Booking.com also gave guests the opportunity to stay in the replicated version of Rachel and Monica’s apartment earlier this year. Even though the show premiered back in 1994 and aired through the early 2000s, it has transcended generations and has managed to stay one of Gen Z and Millennials’ favorite shows. Ahead of the reunion, Gen Z has also been discovering fashion from the show, including Jennifer Aniston’s iconic ‘90s outfits, which many users have replicated on TikTok. Social accounts like @everyfriendsoutfit on Instagram, which has 50.1K followers, which features clothing from the series, have garnered new followers in the last year. According to Google data compiled by Money.co.uk last year, “Rachel Green” was the TV character with “the most-searched style,” Pinterest reports that searches for “Rachel Green aesthetic” are eight times higher over the last month than during the same time period in 2017, while searches for “Rachel Green outfits” have increased by 58%. During the pandemic, reunions of popular ‘90s and ‘00s films and TV shows have been popular, thanks in part to Josh Gad’s YouTube show “Reunited Apart.” Late last year, HBO Max aired the reunion of another ‘90s popular sitcom The Fresh Prince of Bel-Air. Meanwhile, Millennials have been rediscovering and falling in love with The Nanny all over again after it was added to HBO Max last month—and while a short, virtual reunion was organized by Fran Drescher last year, some are already asking for an official reunion of the show to air the streaming service. 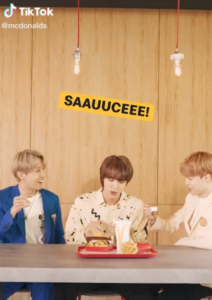 Following the successful Travis Scott meal, McDonald’s is back with their menu collab with BTS—and it features two special Korean-inspired dipping sauces and a limited edition merch drop.

Some users on TikTok are using the hashtag #Americancore and sharing videos of themselves at Walmart to show off the “American aesthetic” to flip the script on people who exoticize Asian culture.

A 17-year-old shared details about his birthday gathering on TikTok—and the “kickback” went viral so fast that thousands of teens showed up to his party, and attracted the attention of popular influencers like Noah Beck and FaZe Clan members.

A few users on Twitter are petitioning for Auntie Anne’s to build a drive-thru for their popular pretzels.

The famous “Charlie Bit My Finger” video is disappearing from YouTube after it was sold as an NFT for $760K.

North West called her mom Kim Kardashian out for supposedly being a “fake” Olivia Rodrigo fan.

Lindsay Lohan is making an acting comeback and starring in a Netflix Christmas romcom later this year.

Gen Z-favorite actor Timothée Chalamet will star in the new Willy Wonka movie that will focus on the fictional chocolatier’s origin story.

Marvel Studios just released the trailer (which garnered 77 million views) for their upcoming Eternals movie starring Gemma Chan, Angelina Jolie, Salma Hayek, and Kumail Nanjiani—and it’s already being called one of the “most diverse” casts of superheroes ever.