Jif made limited edition peanut jars to settle an ongoing debate, Spotify is notifying users that they’re top fans, everyone is excited for the Friends reunion, and Dior is getting backlash on their new “feminist” collection—plus more stories and youth news you shouldn’t miss this week… 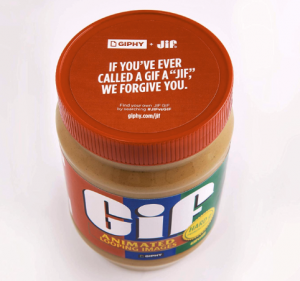 Jif Made Exclusive Peanut Butter Jars to Settle THAT Debate

Is GIF pronounced with a hard “G” or not? The peanut butter brand partnered with Giphy to settle the debate that has divided the internet for years. Ahead of National Peanut Butter Lover’s Day on March 1, they released limited edition special-labeled jars, declaring that “Gif” with the hard “G” is an animated lopping image, while “Jif” is just “creamy peanut butter.” The jars sold out in less than five minutes. Then sold out again almost instantly after a limited selection of 500 jars were restocked. Jif is following a long line of other brands using weird marketing to reach young consumers—and if there’s anything that’s been proven, it’s that limited edition food products sell out quickly. 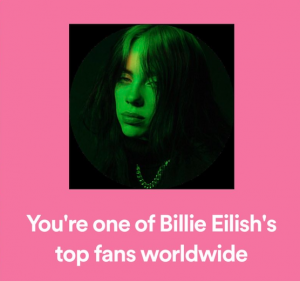 Spotify users were caught off guard this week when their music listening was interrupted with the messages like: “You are one of [this music artist’s] top fans worldwide” and “You’re one of their top 1% fans. Hit Play on their radio and we’ll provide an endless stream of their music.” Other alerts told users they were in the top two or six percent of fans. The alerts were all over social media, but many were also confused. According to the New York Times, Spotify declined to speak about how they determined who’s a top fan, but said the campaign was simply a “test.” Analysts believe it’s just another way for the music streaming app to collect user’s data. Whatever the reason, Spotify knows how to keep fans interested. 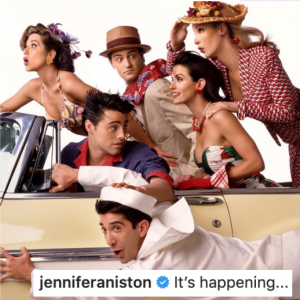 The Friends Reunion is Finally Happening & Everyone Is Really Excited

This week, the cast of Friends set Instagram on fire when they posted simultaneous throwback images with the message “it’s happening…” After many years of speculation, the Friends reunion is finally happening and will be released on its new streaming platform HBOMax in May—to celebrate the show moving there from Netflix. And of course, everyone is really excited. Celebs couldn’t hold back their feelings, sharing their thoughts all over social media. Even though the show premiered back in 1994 and aired through the early 2000s, it’s managed to transcend generations and stay one of Gen Z and Millennials’ favorite shows. The cast itself is beloved by many—when Jennifer Aniston joined Instagram last year, she garnered 6 million followers in one day. The show has become so popular that some Millennials have turned to desperate measures to watch the series after it leaves Netflix—including scourging up old DVD players and downloading European VPNs. 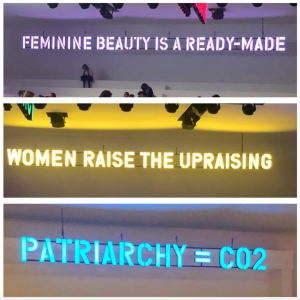 During Paris Fashion Week, neon signs with the words “CONSENT,” “PATRIARCHY = REPRESSION,” and “FEMININE BEAUTY IS A READY-MADE” hung from the ceiling for Dior’s fall runway show. Though the signs were meant to make a feminist statement, it caused much division on the internet: Many praised it for its timeliness, and aligning with the #MeToo movement, while others criticized the showcase, asking who the display is actually for. Twitter user @arabellesicardi wrote: “my eyeballs boutta roll out my head @ this dior show…choice.” Major fashion brands are being called out for hypocrisy and “woke-washing,” and Dior is the latest to face the accusation. 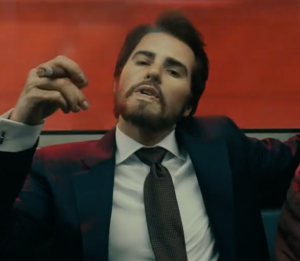 Lil Nas X crashed a stranger’s wedding at Disney World and danced to his hit single with the bride.

Lady Gaga dropped a new single and music video for “Stupid Love”—her first in three years—and fans are loving it.

Jordan Peele is promoting his new film by daring Twitter users to conjure the “Candyman” on Twitter.

The Lizzie McGuire reboot allegedly is not “family-friendly” enough for Disney+.

Schitt’s Creek fans are getting license plates with one of the show’s most quoted lines.

Panera Bread is launching an unlimited coffee subscription for $8.99 a month.