The hype around NFTs is everywhere and making its way into marketing efforts. But do young consumers even know what they are?

If you’re online a lot, you know that the internet obsession of 2021 is NFTs. We previously explained to you WTF NFTs are, but here’s a quick refresher: First, they stand for “non-fungible tokens”—and they’re part of the “Ethereum blockchain.” So, they’re similar to Bitcoin or Dogechain, but NFTs are a unique type of cryptocurrency in that by having one, it’s telling someone else that you “own something” virtually, that can then be sold or traded. Basically, they’re like a certificate of ownership—and so far, they’ve been applied to digital assets like artwork, memes, GIFs, and even tweets and words.

The hype around NFTs has been growing all year, with massive sales—like $17 million for Sotheby’s sale of an NFT collection by digital artist Pak, and nearly $600K for the  famous Nyan Cat GIF—making headlines. Celebrities, influencers, and creators have been jumping on the NFT movement to sell not digital art, images, and their own social media posts. It seems like (almost) everything (digital) is an NFT. But brands have started jumping into the NFT craze, too. In March, Taco Bell launched a collection of crypto art and GIFs for $1 each, and they sold out within half an hour of dropping. Now, Stella Artois is auctioning off GIFs as NFTs as a way to raise money and support their bartenders in the U.K, while General Mills is promoting the return of chocolate Dunkaroos by  auctioning ten original digital artworks to raise money for charity. Charmin, Pringles, and Procter & Gamble have made similar NFT efforts.

Some experts believe that NFTs do pose a real marketing value that could possibly outlive the “current mania.”But despite their rise in popularity, do young consumers actually care about them—or even know what they are? To find out how many young consumers understand NFTs, and how they feel about brands using them in marketing, we used our on-demand survey platform PULSE today to ask them. Since NFTs are a somewhat confusing concept, and a very new phenomenon, we started with the basics: 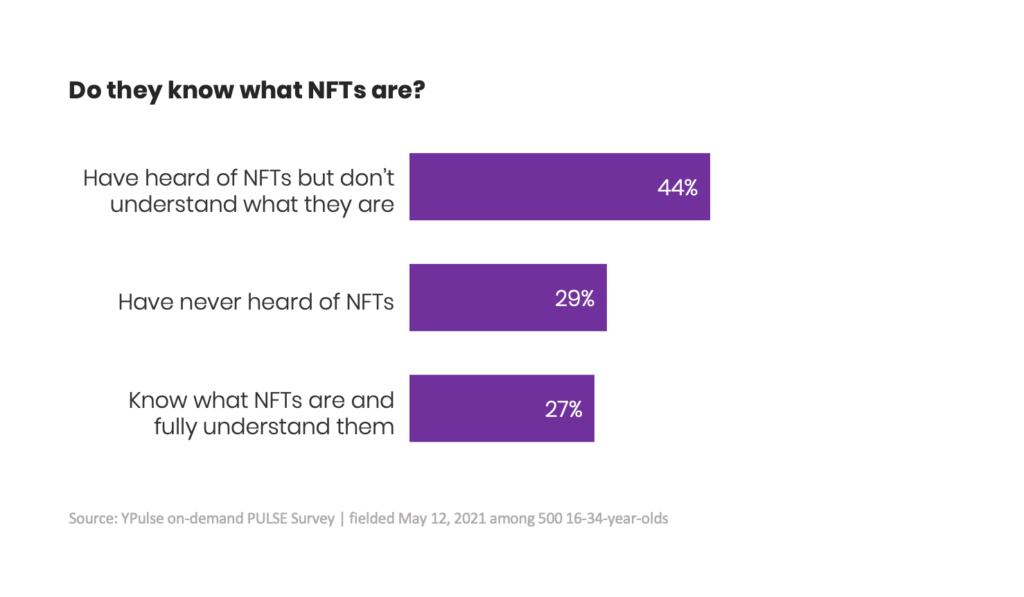 We also wanted to understand how many young consumers are actually interested in owning and trading NFTs, and how they feel about brands tapping the trend for marketing campaigns. For respondents who told us they didn’t understand or know about NFTs, our PULSE provided the explanation: “NFT stands for “non-fungible token” and they transform digital works of art and other digital collectibles (like GIFs and memes) into one-of-a-kind, verifiable assets that can be sold and traded on the blockchain. For example, the Nyan Cat GIF/meme was turned into an NFT that sold for $590K.” We then asked each group of respondents—those who said they understood NFTs, those who said they had heard of NFTs but didn’t understand them, and those who had never heard of NFTs—follow up questions about their views on the digital assets: 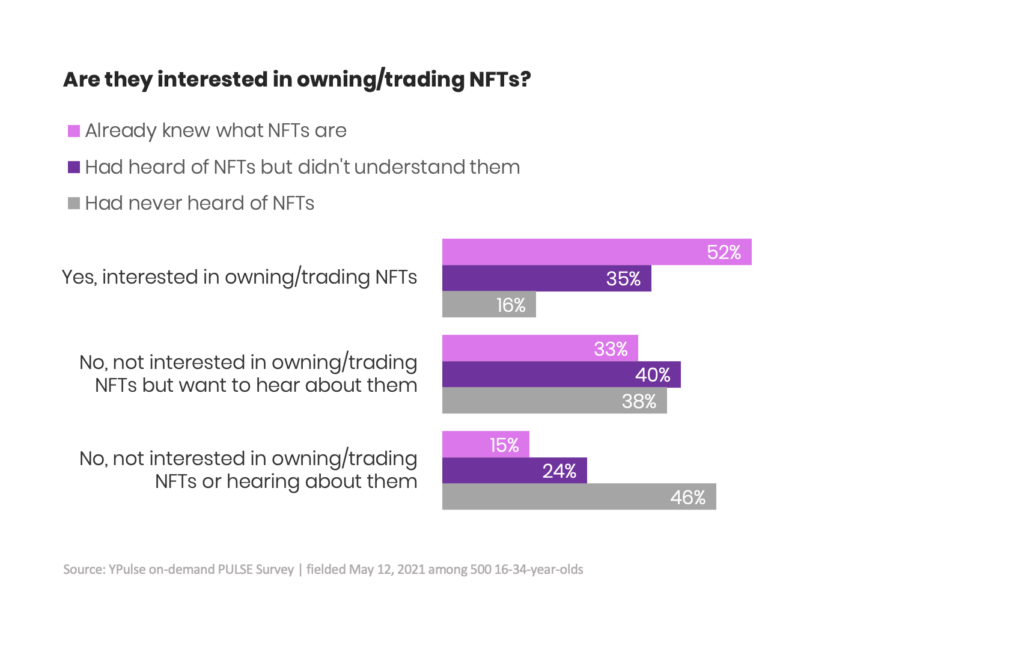 Of course, with so many brands jumping on the NFT bandwagon, we then asked all groups their feelings on NFTs used as marketing: 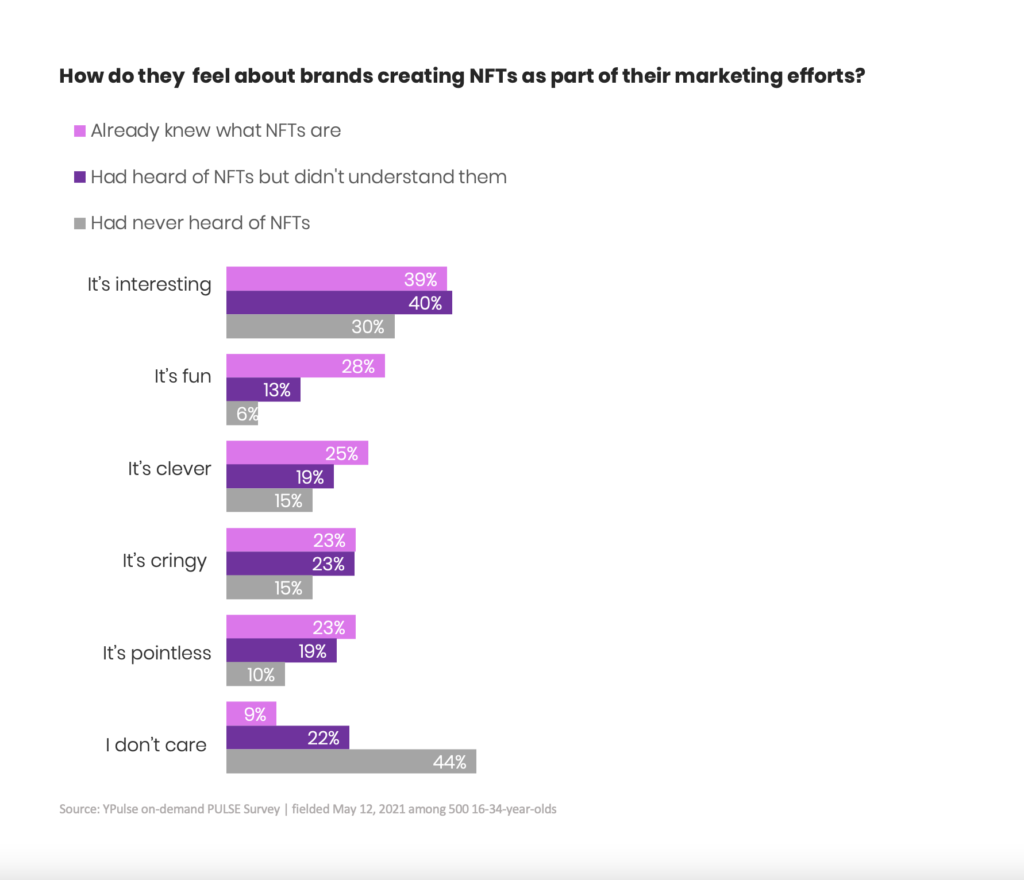 Young consumers who already know about NFTs are most likely to have positive views of brands using them in marketing: 39% think it’s interesting, 28% say it’s fun, and 25% say it’s clever. Of course, 23% say it’s cringy, 23% say it’s pointless, and only 9% don’t care, but positive feelings ranked higher among this group. Among respondents who heard of NFTs but didn’t understand them, results were more mixed: while 40% say brands using NFTs in marketing efforts is interesting, “cringy” was the next highest response, followed by “they don’t care.”

However, brands should also know that among both those who know and understand NFTs and those who were aware of them, but didn’t quite understand them, there were some more negative reactions in comments, with respondents referring to NFT in marketing as “destructive,” “bad for the environment,” “extremely unsustainable.” and “another way to exploit money.” Since NFTs started coming on the scene, many users on the internet have expressed their worry about how they aren’t environmentally friendly because of the amount of the energy they use to be created, and despite some people thinking that it can benefit the music industry, some smaller and indie performers are pushing back against them.

There’s no question that NFTs are a hot button topic, and clearly they’re not the tactic to turn to for those brands hoping to reach a larger group of young consumers—or those afraid to stir up controversy. But niche marketing has its place, and those young consumers who are aware of NFTs are also mostly open to brands’ involvement in the space.