Eminem (& Millennials) are hitting back at Gen Z after they tried cancelling the rapper, Oprah is getting the meme treatment following her interview with Meghan & Harry, Burger King is catching heat for a confusing tweet, andNFTs are taking over the internet—plus more youth-focused news taking over the web this week! 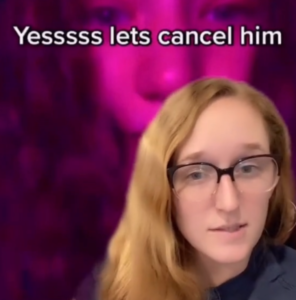 Gen Z Tried To Cancel Eminem & Millennials Fought Back With Him
First, Gen Z and Millennials were sparring over skinny jeans and side parts—and now they’re fighting over…Slim Shady. Last month, a user on TikTok (who has since been removed from the app) went viral after releasing a video criticizing Eminem’s song “Love the Way You Lie” featuring Rihanna calling out lyrics that she claimed perpetuated abuse and violence against women. According to Esquire.com, the hashtag #canceleminem immediately garnered millions of views (but at the time of writing this article could not be found) with Gen Z users similarly criticizing the rapper for her past songs. But the conversation was soon taken over by Millennials coming to his defense, claiming that he has “always been controversial,” and that the initial song is bringing awareness to domestic abuse rather than glorifying it. (Meanwhile, the hashtag #canceleminem2021 has garnered 9.1 million views.) Then, on Friday, Eminem himself responded with a new animated lyric video (which has received more than five million views on YouTube) of his 2020 song “Tone Deaf” with an emphasis on the verse “I won’t stop even when my hair turns grey (I’m tone-deaf) / ‘Cause they won’t stop until they cancel me.” Gen Z-popular musician Lil Nas X even stepped in to try and diffuse the situation with some comic relief, sharing a video of himself doing a freestyle rap. While the #canceleminem movement continues to highlight the ongoing “feud” between Gen Z and Millennials, it also emphasizes how teens are not afraid of calling out celebrities and other public figures for past problematic behavior. 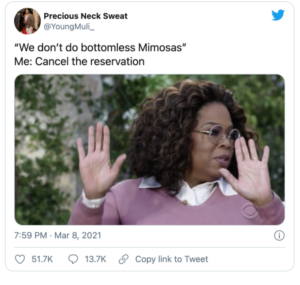 Last Sunday night, Meghan Markle and Prince Harry sat down with Oprah Winfrey for their first major interview since leaving the Royal family last year. According to CBS, the broadcast brought in more than 17 million viewers. In it, the former Duke and Duchess of Sussex exposed new information about the reasons that pushed them to step away from the monarchy, including Markle’s suicidal thoughts and racist conversations surrounding their unborn son Archie. Oprah, of course, was shocked at the revelations—and clearly showed it. The following day, the internet was flooded with users rallying support for the couple, and criticism about racism in “the institution.” But the one thing that really took over? Social media exploded with memes from various segments of the interview including Oprah repeatedly asking “What?” or throwing her hands in the air out of disbelief. The interview is enjoying a second round of success as reaction GIFs from the event flood feeds. But it’s not all fun and games: some have criticized the memes for being another example of digital blackface. 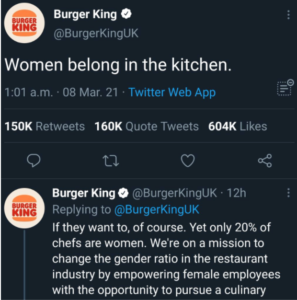 Tuesday was International Women’s Day, and many brands launched campaigns in support of women around the world. However, Burger King UK took a different approach, and people weren’t too happy about it. The fast food brand tweeted “Women belong in the kitchen.” from their @BurgerKingUK account, and the message was almost instantly panned by users who came across it. The chain explained they weren’t trying to “perpetuate a persistent and cliché gender stereotype” with their tweet, it was actually the start of a longer thread that highlighted the underrepresentation of professional female chefs in the U.K.’s restaurant industry and to introduce their new scholarship program addressing those disparities. But while it was meant to be “provocative” to grab people’s attention for, they didn’t plan for that first tweet to receive such harsh criticism. By the night it was sent out, the brand received so much backlash that they were forced to delete the tweet (which had already been seen by thousands and millions of users) and issue a “formal apology.” A new tweet, which received 29.9K likes and more than 1K retweets, read: “We hear you. We got our initial tweet wrong and we’re sorry. Our aim was to draw attention to the fact that only 20% of professional chefs in UK kitchens are women and to help change that by awarding culinary scholarships. We will do better next time.” If there’s anything that brands can take away from this is that it’s important to be transparent and clear about the social good messaging you want to get across to young consumers. 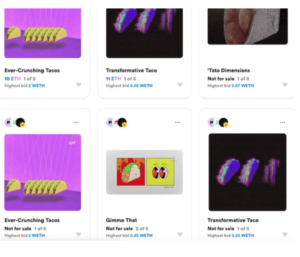 WTF Are NFTs—and Why Are They Everywhere?
Haven’t heard about what NFTs are yet, or you’ve seen the term everywhere and aren’t entirely sure what they are? Here’s an explainer! It all started a few weeks ago when Grimes sold $6 million worth of digital artworks in an auction on online marketplace Nifty Gateway. Her highest selling piece was a one-of-a-kind video “Death of the Old” that involved flying cherubs, a cross, a sword, and glowing light set to one of her songs that sold for nearly $389K. In the same week, it was announced that rock band Kings of Leon would be the first band to release an album as an NFT. And other artists like Post Malone have since joined the bandwagon to auction off merch and a “private beer pong game.” Well, what are they? According to Esquire.com and The Verge, NFTs stand for “non-fungible tokens,” and they’re part of the “Ethereum blockchain.” So, they’re similar to Bitcoin, but NFTs are a unique on its own and by having one, it’s telling someone else that you “own something” virtually—like a digital art piece—and you can trade it in. It’s like (very, very. Expensive) a digital arcade ticket that can be traded for a digital prize. But if you do, you’ll get an entirely different piece in return. Basically, NFTs can be anything digital, like drawings, music, or even “your brain downloaded and turned into an AI.” This week, artist Beeple also sold an NTF artwork for $69 million. (Yes, $69 MILLION.) Social media and especially the meme industries starting to get into the NFT game: Earlier this week, the creator of the original “Bad Luck Brian” meme sold the digital ownership of it as an NFT on another online marketplace Foundation, while the Nyan The Nyan Cat meme sold for almost $600K a few weeks earlier. Twitter CEO Jack Dorsey auctioned off ownership of the first-ever tweet to benefit charity. Meanwhile, brands and influencers are getting into NFTs too: Taco Bell launched a collection of crypto art and GIFs for $1 each, and they sold out within half an hour. Now, they’re being resold for thousands of dollars. Meanwhile, YouTuber Logan Paul recently sold $5 million worth of NFTs, while Elijah Daniel launched a set of “parody NFTs” with The Clout Market, which he describes as “like the stock market, but for investing in humans.” The “humans” that he currently has available for “investing” are eight satirical Pokémon-esque non-fungible tokens based on popular influencers and celebs like “Jarmes Charlies” (1,000 cards available) or “Elon Muskular” (five cards). However, despite their recent virality on the web, not everyone is happy about them. Many have expressed their worry about how NFTs aren’t environmentally friendly because of the amount of the energy they use to be created, and despite some people thinking that it can benefit the music industry, some smaller and indie performers are pushing back against them. Some art deals and auction houses are also showing disdain toward the concept. Regardless of what side of the discourse you fall on or whether you think it’s just a passing fad, NFTs seem to be the cryptocurrency of the moment. 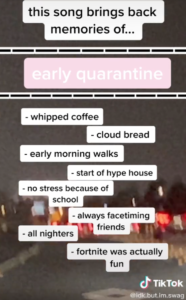 A British woman on TikTok tried American Ranch dressing for the first time and was “enlightened” by the taste.

Charlie D’Amelio says she’s no longer as passionate about making videos on TikTok after recent “online negativity” and backlash.

Social media cannot stop turning this behind-the-scenes photo of Lady Gaga and Adam Driver on the set of Ridley Scott’s new Gucci movie into a meme.

The internet is obsessed with young Minari actor Alan Kim after he cried during his “touching” acceptance speech during the Critic’s Choice Awards.

The Space Jam sequel is already getting embroiled with controversies and it’s not even out yet.