A TikToker is going viral for parodying influencers, people are calling for the end of gender reveal parties after this disaster, TikTok users can’t get enough of “WAP,” and the new Dune trailer has 13 million views—plus more stories and youth news to wrap up your week… 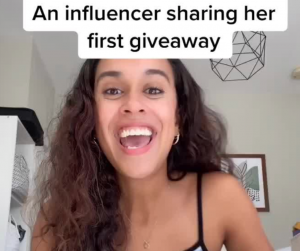 This Comedian Parodying Influencers Is Kind of An Influencer

This week we told you about four TikTok influencers that you should know about, but it turns out you should also be paying attention to this TikToker parodying influencers—and getting hundreds of thousands of views a post. Erika Priscilla (@erikaxpriscilla) who has 211.3K followers on TikTok and 18.5K on Instagram, parodies lifestyle influencers by exaggerating some of their most typical content—like making basic meals, opening mail, and pulling “spontaneous” pranks on their partners. Her content incorporates a lot of signature influencer phrases, like, “Hey, guys!!!” and “I’m just hopping on really quickly” but her over-the-top (bordering manic) delivery turns these tropes into comedy gold. BuzzFeed reports that Priscilla has gotten so popular that she’s getting her own brand deals—which actually makes her kind of an influencer herself. She tells they site, “Some of [influencers’] dialogue has become so rehearsed and almost robotic in a sense. I know I am not the only person who has observed these similarities before.” And in a TikTok addressing her own brand deal, she clarifies: “I’m not making fun of what influencers do for a living at all because, as you can see, I posted a Poshmark ad—go me…I’m making fun of how they do things.” 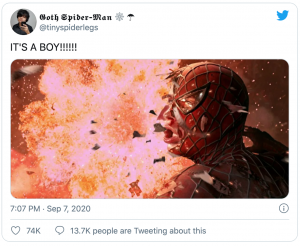 Over Labor Day weekend, an “elaborate plan” behind a gender reveal party went horribly and “disastrously” wrong when a “smoke-generating pyrotechnic device” sparked a wildfire that spread across thousands of acres in Los Angeles. This isn’t the first time a gender reveal party has led to devastating results either. However, the news of the Los Angeles incident, in the midst of the worst wildfire season that California has ever seen, has led to national discussions and debates on social media about gender reveal parties, and how they need to be ended. And in light of the events, users on Twitter have been using the #AtTheGenderRevealParty to create memes mocking gender reveal parties by “crafting absurd scenarios” or “contextualizing” them with well-known historical catastrophes like the Hindenburg disaster. Even the credited creator of gender reveals, blogger Jenna Karvunidis, shared a post on Facebook (that received 3.1K reactions) urging others to stop throwing these types of parties. Karvunidis wrote that even though she’s the “inventor” of the concept, she doesn’t think people should “burn down their communities,” and appeared on The Daily Show to make her case. Beyond just the physical danger of over-the-top gender reveal parties, some argue that they should have been “canceled long before the California fires” due to the harm they cause for transgender and non-binary people. 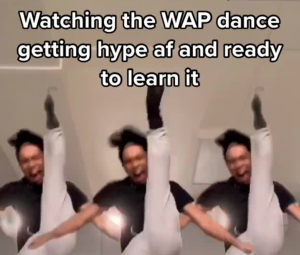 When Cardi B and Megan Thee Stallion’s “WAP” debuted last month, the song (and accompanying music video) became an instant hit and “cultural phenomenon” topping the Billboard charts within weeks—but it’s also caused a lot of polarizing reactions and a discussion about female sexuality. In recent weeks, the song has made its way to TikTok, and of course, already has its own viral dance challenge. Not long after the song dropped, YouTube choreographer Biran Esperon (@besperon) posted a “fast-paced and joyful routine” to go along with it on TikTok—and a trend was born. The original video has 59.6 million views, and the song itself has 2.9 million videos on the app of other users reenacting the challenge. Cardi herself even posted the video on her Instagram and did the dance challenge on her Live. Since then, other trends have been inspired by the track, pushing the hashtag #WAP to 5.5 billion views. Users have been creating mashups of the opening lyrics to Megan Thee Stallion’s first verse to songs like Hozier’s “Take Me to Church,” Frozen’s “Let It Go,” and even the main score from Phantom of the Opera. The trend became so big that it even made its way to the musical’s creator Andrew Lloyd Webber, who shared a video (that received 2.3 million views) of himself dancing to the popular track, while playing the piano to his famous track. Megan Thee Stallion isn’t new to TikTok fame: Her song “Hot Girl Summer” was previously a song of the summer, while “Savage” has also been part of a popular viral dance. 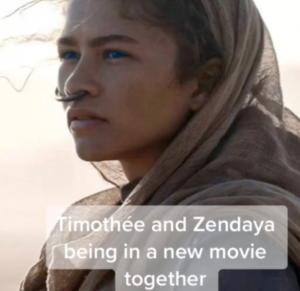 Everyone Is Already Anticipating Dune

When the Dune novel by Frank Herbert came out in the ‘60s—followed by the David Lynch film in 1984—it spawned a cult following of sci-fi lovers. The story follows various nomadic tribes battling for control on the fictional planet of Arrakis. Now, in 2020, the title is getting a fresh remake starring Timothée Chamalet, Zendaya, Jason Momoa, Oscar Isaac, and other big names. This week, the long-awaited trailer for the film dropped, and already has more than 13 million views and is among YouTube’s top trending videos. Users on social media from Twitter to TikTok (the hashtag #dune has 26.3 million views) are already excited for it. Why the newfound attention to an old classic? Much of the anticipation stems from the hype around Chalamet and Zendaya, both of whom are young actors popular among Gen Z. Clearly, if a movie studio wants to get young consumers to hype their film, they need to cast some Gen Z-favorite actors. 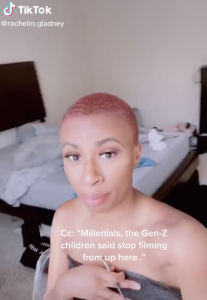 #MillennialsofTikTok is trending on the app and already has 1.7 billion views, telling the generation, “Welcome, you can hang out here too.”

A #FilterDrop campaign on Instagram is urging users to embrace their “normal skin.”

This TikTok user found a “clever hack” to get free food from restaurants.

An influencer is getting called out for copying an Ashanti song and claiming it as her own.

Keeping Up with the Kardashians is finally coming to an end after 20 seasons–and Twitter has a lot of thoughts.