#AdultSwim, #HoldMyMilk, and 4 Other Hashtags That Trended On TikTok This Month

Last month, we told you about the hashtags that took over TikTok. So far in June, we’ve already told you how #dreamcore has become the new aesthetic that Gen Z is obsessed with (move over, cottagecore) and how #oreosushi is the food trend of the moment. But those aren’t the only trends that racked up millions, or billions, of views on the app this month. From celebrating Pride Month to participating in animated challenges, here are some of the most popular TikTok hashtags brands should know about this month: 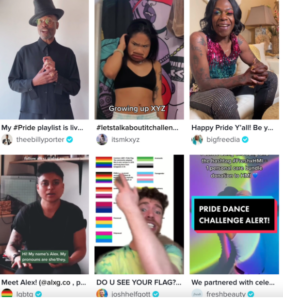 #ForYourPride (3.1B Views)
June was Pride Month, and many young users on TikTok celebrated and expressed themselves using the hashtag #ForYourPride hashtag, which was part of the platform’s campaign—and currently has 3.1 billion views. As part of it, the platform unveiled their LGBTQ+ TikTok Trailblazers, some of which made our LGBTQ+ influencer roundup, who shared several videos throughout the month using the hashtag. Other Pride-related hashtags were trending on the app this month as well, including #prideanthems, which currently has millions of views, where users shared iconic songs that have been an essential part of queer history, or are their personal favorites. We told you how Gen Z is more likely to identify as LGBTQ+, and their eagerness to participate in hashtag campaigns that allow them to celebrate themselves authentically with their peers is an effective way to reach them.

Adult animated shows have been particularly popular during the pandemic, and earlier this month, a nostalgic trend took off on TikTok as users paid homage to Adult Swim—and the network’s popular “bumps” from the 2000s, which served as transition clips between commercial breaks and their programming blocks. Many of these featured short films, “textual sequences,” or time-lapses—and usually ended with the Adult Swim logo. They also tend to have a cheeky tone, and were known for their conversational style that would sometimes break the fourth wall to speak directly to viewers. Recently, TikTokers have been using the hashtag  #adultswim (4 billion views) and #as (2.6 billion views) to create their own homage commercial “bumps” and parodies. The trend initially started at the end of May when user and musician Vano 3000 (whose @supervano account has 254.3K followers) created a track that samples BADBADNOTGOOD’s song “Times Moves Slow”—and added it to the background of a video, which received 860.3K views, of a person dressed up in a Spider-Man costume in a subway station in NYC, followed by the Adult Swim logo. Since then, others started making their own “bumps” using Vano 3000’s tune, which currently has 652.6K videos. The videos, which have ranged from simple to elaborate, usually reveal the “[as]” or “[adult swim] logo somewhere in the video, either by moving their head, exposing somebody’s back as they lay down on a towel, or flipping a mirror. As the trend rapidly caught on, Adult Swim even got in on it themselves by sharing their own video on their own TikTok channel using the same beat, accruing 27.4 million views. The trend shows the endless depths of Gen Z and Millennials’ nostalgia, and the opportunities that many brands likely have to resurface old media. 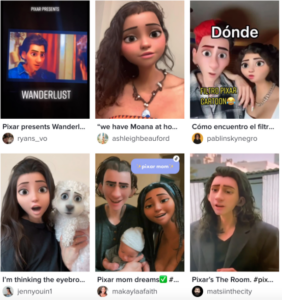 Speaking of animation, Snapchat unveiled a new AR Lens at the beginning of the month that caused a trend to take over TikTok and other social platforms. With the filter, users began turning themselves into Pixar-like characters. While Pixar movies are known for their G-rated, family-friendly content, users have been participating in a challenge that not only Pixarizes everything around them, but R-rated movies as well. One of the most-viewed videos on TikTok, which has 2.7 million views, is from user @ryans_vo who uses the filter on actor Paul Rudd from a scene in Wanderlust where he rattles off crude phrases to himself in the mirror. Other movies that users have Pixarized on TikTok include American Psycho, The Shining, The Room, and No Country For Old Men. Meanwhile, the challenge also made its way to Twitter, where user @RobertPalacios2 shared a thread, which has 383.8K views, using the filter on the movies like Heat, The Departed, The Wolf of Wall Street, and The Fast and the Furious. So far, the hashtag #PixarFilterChallenge has 14.8 million views on TikTok. This isn’t the first time Snapchat went viral for one of their filters: Last fall, they debuted an anime Lens, which also led to its popularity on TikTok, and the hashtag #animefilter currently has 280.4M views. The success of #PixarFilterChallenge is proof that popular content is not living on a single social platform—a Snapchat filter can go viral on TikTok, and TikTok content can rack up views on Instagram. For young consumers with accounts on multiple apps, cross-platform sharing is a norm. 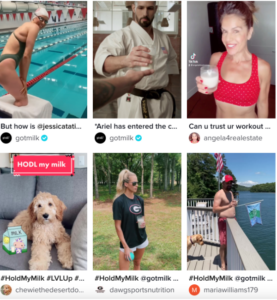 (12B Views)
Sure, Got Milk? Is mostly known for their milk mustache-laden star-studded ads from the ‘90s, but the team behind the advertising campaign has been jumping on TikTok recently to keep dairy relevant, and engage with young consumers. At the beginning of the month, they launched the #HoldMyMilk hashtag, which currently has 12 billion views, and involves users asking someone to “hold their milk” (a twist on the popular phrase “hold my beer”) as they perform an impressive stunt, like doing a backflip or a bike trick. After successfully finishing the stunt or trick, they come back to their glass or bottle of milk and take a drink—heavily implying that the milk is what helped boost their abilities. This isn’t the first time Got Milk? has caused a milk-related challenge to go viral. Last fall, they launched the #GotMilkChallenge, which accumulated 4.6 billion views, and featured users once again performing various tasks and stunts all while balancing a glass of milk on their head—with some having messy results. 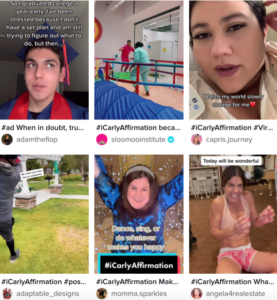 Meanwhile, #HoldMyMilk wasn’t the only sponsored hashtag that trended on TikTok this month. We told you at the beginning of the month how young people were excited for the iCarly revival on Paramount+—and a sponsored hashtag that took off shortly on TikTok after the premiere of the first three episodes continues to highlight their excitement. With the hashtag #iCarlyAffirmation, which currently has 8.2 billion views, users are sharing videos of themselves using the theme song from the show—and sharing themselves in situations where they use uplifting affirmations and wisdom from iCarly to get them through the day. Utilizing sponsored hashtags to promote new TV shows and movies have proven to be a hit: Last month, the hashtag #FriendsReunion, which has 12.8 billion views on TikTok, went viral on the app and Twitter as fans of the show shared their enthusiasm for the reunion special on HBO Max. Meanwhile, as a way to promote movie musical In The Heights, Warner Bros. and HBO Max (once again) launched the hashtag #InTheHeightsChallenge (10.3 billion views) to encourage users to share all the ways they would spend $96K if given the opportunity, which is a reference to the movie where the characters sing about being in the exact same scenario. 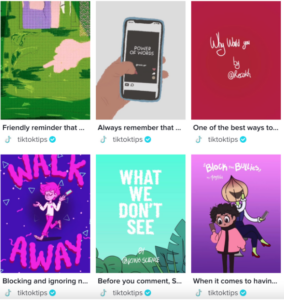 (756.6M views)
At the beginning of the month, TikTok launched a campaign “to encourage positivity and inclusion” on the platform to combat online bullying and harassment. As part of it, they teamed up with six of the platform’s most popular animators—@king.science, @milkymichii, @recokh, @kellyemmrich, @amyrightmeow, and @rosie.gif—to make videos for the campaign, which was shared on the @tiktoktips account, which has 3.6 million followers, and tagged using #CreateKindness, which currently has 756.6 million views. Many of the videos highlight the pressures that creators and influencers face on the platform. Following the debut of the videos, other users shared their own content using the hashtag to share the ways they’re preventing anti-bullying online and in their respective communities.