Why Millions are Tuning into #BamaRush on TikTok, on The Viral List

Sorority rush week is also taking over TikTok, Rihanna fans are reviewing Fenty Beauty’s sold out perfume, Batman’s iconic sidekick Robin has officially come out as bisexual in the comics, and Gen Z musicians are dominating this week’s Billboard 200 chart—plus other news taking over young people’s feeds this week! 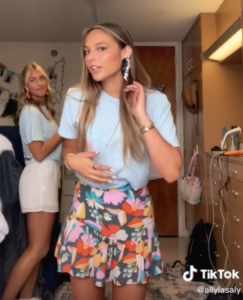 Sorority Rush Week at the University of Alabama is Trending on TikTok—& Users Can’t Stop Parodying the Content
In case anyone needed a reminder that it’s officially back-to-school season, TikTok has graced everyone’s For You Page this week with clips from women going through sorority recruitment at the University of Alabama, sharing their #OOTDs every single day. The canon for the video is simple: Pledges (or potential new members/PNMs as they’re officially called) walk up to the camera and name off each item of their outfit, where it’s from, and the cycle repeats with the next girl waiting in line inside the incredibly crowded dorm room. And while many people originally felt as if they were being served the wrong side of TikTok after seeing the cringeworthy clips, now everyone can’t get enough of the trend—some have overtaken the #Bamarush and #Alabamarush tags (which have 55.3 million and 19 million views each) with videos parodying the content. Some of the most viewed  parodies are from @i_delz wearing a frilly pink skirt straight from the 2000s (not the fashionable kind, however), a long sleeve fraternity shirt, and hair claw clips as earrings, and @conordevoe recreating sorority members’ version of the trend—the videos garnered 2.8M and 713.2K views, respectively. With peoples’ TikTok algorithms consistently serving video after video of PNMs’ outfit checks, some users have become so invested that they can’t wait to see what house the women run “home” to on bid day (and who gets cut). Kendra Scott even got in on the TikTok trend in a “Choose Your #BamaRush Jewelry Look” video with the caption, “Necklace is from Kendra Scott (garnering 55K likes in just one day).” If there’s anything that Alabama Rush TikTok has revealed, it’s Shein’s and Zara’s influence over young people. One Twitter user sums it up perfectly: “I also have to say that Alabama RushTok has made me realize that there are just…..SO many fast fashion brands out there that I have literally never even heard of.” And while recruitment content tends to go viral around this time of year, New York Times reporter Taylor Lorenz explains in a tweet how this is the first rush season since TikTok became popular: “Rush content always goes SO viral at this time of year (takes over IG and YT). Last year we didn’t have a rush season b/c of COVID, so this is the first post-TikTok boom rush season, I feel like that’s why it’s all over the fyp!” The University of Alabama is known for having one of the largest rush turnouts, with more than 2,500 PNMs going through the process this year, and TikTok has officially given sorority recruitment a next gen makeover—for better or worse. 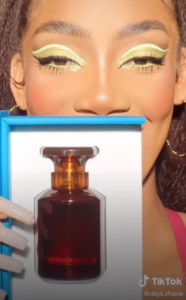 Fenty Beauty’s Perfume Sold Out Online Hours After Dropping
On Wednesday, Fenty Beauty dropped its highly anticipated, first-ever Fenty Eau de Parfum, which is described as a scent infusing magnolia and musk “with tangerine blueberry, and hints of Bulgarian rose absolute, geranium, and patchouli.” And of course, Fenty Beauty founder Rihanna—who hit billionaire status last week—celebrated the news by having caviar in bed in a post she shared via Instagram garnering over five million likes. Fans who got early access to the product also celebrated the perfume’s release on TikTok: The hashtag #fentyparfum currently has 2.9 million views and counting, and features users sharing their first impressions and reviews of the scent. In a video, @Makeupbykalyssa says, “If you want to smell like a rich b*tch, then get this,” while @Deja.zhane notes, “It’s not a very overpowering scent, it’s very soft and you can layer it with other fragrances.” We told you how Rihanna is one of the top musicians that Gen Z and Millennials feel represent their generation, and her loyal fans have seemingly followed and supported her journey into becoming a business woman (though many are still begging for a new album). Fenty Beauty is one of the brands young consumers have ranked as one of the top brands they feel authentically reflects diversity, while Gen Z and Millennial women previously listed it as a top indie brand they’re excited to try. So, of course, there was no doubt that young consumers were going to flock to get their hands (and noses) on her new perfume. Even with the saturated celebrity perfume market, other pop stars like Ariana Grande (whose Cloud perfume also went viral on TikTok) and Hayley Kiyoko have been giving their scents a much-needed “Gen Z update”—and the early success of RiRi’s Fenty Eau de Parfum with fans on TikTok is a sure sign that Fenty Beauty is making all the right moves to reach next gen fragrance junkies and perfume consumers. 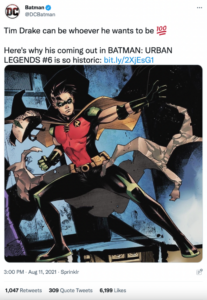 Batman’s Iconic Sidekick, Robin, Has Officially Come Out As Bisexual After Years of Speculation from Fans
After years of speculation surrounding Robin’s sexuality and requests from fans asking DC Comics to portray the character as queer or bisexual, Batman’s sidekick Robin has officially come out as bisexual. The monthly anthology series, Batman: Urban Legends, which came out this March has been building up to reveal Robin’s sexual identity, and officially culminated in the three-part story, Batman: Urban Legends #6, which was published this week. In the final scene of part three, Sum of Our Parts, Tim Drake (who takes on the mantle of Robin in Batman: Urban Legends) is standing in a doorway next to his friend Bernard who says, “Tim Drake…Do you want to go on a date with me?” Drake responds, “Yeah… Yeah I think I want that,” as the comic ends. While it’s unclear exactly where the relationship will lead (fans will have to wait until December to read Batman: Urban Legends #10 where Drake’s storyline is picked up), the acknowledgement of Robin’s bisexuality in a DC Comics series shows how the genre is listening to its diverse readers who have looked up to Robin for years. DC Comics confirmed Robin’s identity in a blog post saying, “As of August 10th, 2021, your headcanon is real: Tim Drake dates boys,” and on the DC Batman Twitter account saying, “Tim Drake can be whoever he wants to be.” The Twitter post has garnered more than 1,000 retweets, over 6,000 likes, and more than 309 quote tweets from fans noting how they’ve been waiting several years for Robin’s coming out moment. One user tweeted: “Anybody surprised by this hasn’t been paying attention. A lot of us have been calling this for decades, the only surprise is how long it’s taken.” DC Comics’s blog post provides an in-depth explanation of the background of Robin’s coming out: “All the way back in 1940, Robin was created with the intention of being a reader surrogate—a character who readers could project themselves onto, fighting crime across rooftops under the enigmatic Batman’s wing. There have been female Robins, Black Robins, rich Robins, poor Robins. Why would a queer reader, especially one overtly ostracized by comics culture itself for so many decades, feel any less worthy of that same surrogate relationship?” While Marvel Studios’ Loki was also subtly revealed to be bisexual in the new Disney+ series, Robin’s story is seen as more groundbreaking since comic books are where superheroes’ identities are first developed early on. YPulse’s research found that Gen Z is more likely to identify as LGBTQ+, and the news is not only a win for diversity and inclusivity, it’s finally acknowledging the impact of Robin’s identity on several readers and giving them the superhero they’ve always wanted. 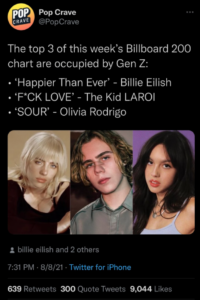 Gen Z Musicians are Dominating Billboard Charts This Week
It appears that teens have taken over this week’s Billboard 200 chart: One week after its release, Billie Eilish’s Happier Than Ever album rose to the very top of the chart followed by The Kid LAROI’s F*ck Love (which has been on the chart for 54 weeks), and rounding out the top three is Olivia Rodrigo with SOUR, whose debut album has been on the chart for eleven weeks. We told you how fans were patiently waiting for the release of Eilish’s second studio album after she dropped new singles and music videos throughout the year, and how Rodrigo’s fans were already anticipating her debut album ever since she took the world by storm with “drivers license.” Meanwhile, 17-year-old Australian singer-songwriter and rapper The Kid LAROI gained international fame for his song “Let Her Go” in late 2019, and went viral on TikTok last March after he shared an unreleased track on the app named after and dedicated to TikTok star Addison Rae, who shared the song on her own profile, receiving millions of views. He’s also known for collaborating with the late Juice WRLD, fellow Gen Z-favorite artist Justin Bieber, and Miley Cyrus. A lot of early hype and buzz online from eager young fans has translated to successful album sales and streams for these teen artists indicating that the future of music (and the world) is Gen Z. 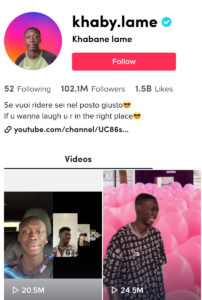 Khaby Lame is the second TikToker to surpass 100 million followers as of this week, and is on track to overtake Charli D’Amelio as the most-followed account.

#frozencucumberhack has 10.1 million views on TikTok—and skincare enthusiasts are obsessed with how well the viral trend works to reduce puffiness and redness.

A video from TikToker @sabinahbaby documenting diners inside a Japanese sushi house from the sushi conveyor belt’s POV has been viewed 34 million times—catching the attention of McDonald’s Canada and Fenty Beauty.

Benny Drama’s parody video as “Kooper the Gen Z Intern” for the White House amassed more than 2.7 million TiKTok views and 850,000 Instagram views in one day—an extension of the White House’s push to boost vaccine rate for young people.

TikTokers are obsessed with Abercrombie’s’ 90s-style jeans, garnering 8.8 million views on the app.

Grilled sunflower heads are the latest (and weirdest) food trend taking over TikTok.

A new meme on Twitter is showing how the Delta variant is ruining everyone’s fall plans.

Designer Bailey Prado is calling out Shein for copying several of her designs.

Sir Kensington’s announced its creating a Honey Mustard Fry Sauce with Chrissy Teigen, despite the star recently losing deals with other brands after being accused of cyberbullying earlier this summer.