#BlackBusinessMonth, #SwiftTok, #ChoppingDance, and 4 Other Hashtags That Trended This Month

You’ve probably already seen the #MilkCrateChallenge all over the internet by now. But we promise that people falling off milk crates weren’t the only thing that was on social media this month. Don’t forget about #BamaRash, where TikTokers parodied Sorority Rush life, and #DisabilityAwareness which took over the platform as athletes and brands prepared for the Tokyo Paralympics. A few sponsored and brand-related hashtags brought in million of views too: Rihanna fans used the #fentyparfum hashtag to review the now-sold-out perfume, while the hashtag for Netflix’s He’s All That, a gender swapped remake of the ‘90s romcom starring Addison Rae, which we told you teens were really excited for, took over the app last week ahead of its premiere.

But even more hashtags were trending on the app this month. From #BlackBusinessMonth to #SwiftTok, here are seven that took over young people’s social feeds in August: 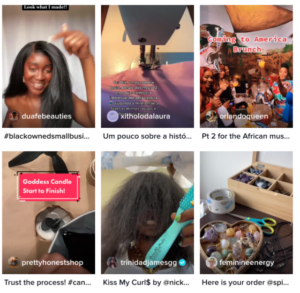 (186.3M Views)
August is Black Business Month, which was first created in 2004 as a way to celebrate and support Black-owned businesses nationwide. But a year after the Black Lives Matter protests, brands have taken the month more seriously and launched initiatives on top of the pledges they’ve already committed to. Companies like New Balance, GroupOn, GoFundMe, Pepsi, and more all launched initiatives this month, while others upped their donations to social justice organizations. Young people also honored the month by celebrating on TikTok. The hashtag #BlackBusinessMonth currently has 186.3 million views and counting, and features users sharing their favorite major and small Black-owned businesses from shops on Etsy to clothing and beauty brands to restaurants—and even Black entrepreneurs showcasing their own businesses on the app. While celebrating themed-marketing holidays is an effective way to show that you care about movements like Black Lives Matter, remembering to continue showing support for those causes beyond just the designated month is an important step to maintaining relationships with young consumers. 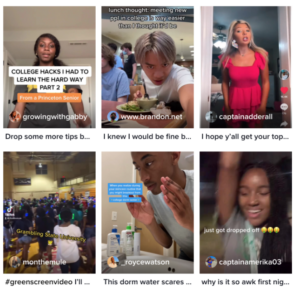 Back to school season is in full swing. We told you how students and parents feel about the back to school season this year. And while some college students are still feeling a little bit of anxiety about returning to in-person learning amid the emergence of the Delta variant, some were looking forward to the return of reuniting with friends and classmates on campus after not seeing them in-person for a whole year. You already know about #BamaRush and how users were both poking fun, yet sharing the excitement for the start of Sorority recruitment season. But another college-related hashtag that trended on the app this month is #collegelife, which currently has 4.9 billion views. Videos feature freshmen documenting their move-in days and first days of school, upperclassmen  giving tips to incoming freshmen about “rookie mistakes” and dating, back to school outfits, and day in a life segments. Despite another uncertain back to school period for a lot of students, many college students are still continuing to find ways to stay connected with fellow college students digitally, and sharing their experiences online is a way for them to be able to do so. 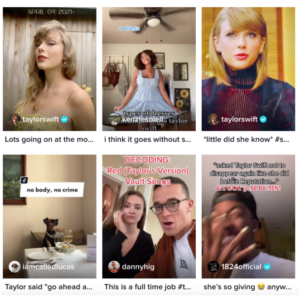 (1.4B Views)
As Taylor Swift once sang, “August slipped away into a moment in time”—but not before she made her debut on TikTok. Last week, Gen Z and Millennials’ favorite artist finally joined the app in a video, which features her cycling through outfits matching her most recent album releases, and has received a whopping 13.7 million views. We told you how fans were so in love with the yellow floral Reformation dress she wore in it that it led to the same design selling out on the clothing brand’s site. But aside from causing the outfit to go out of stock, the video also inspired the hashtag #SwiftTok, which currently has 1.4 billion views (and counting). Clips feature fans showing off their own Swift-inspired outfits or showing their excitement for her upcoming Red album re-release. In the last year, Swift has gone viral for, well, a lot of things, from her surprise album drops of folklore and evermore to the re-recordings of her older albums. YPulse’s previous fandom trend research explored how fandoms like Potterheads and Swifities have a major influence in young people’s lives, and our recent Clicking in Community trend report found that a majority of Gen Z and Millennials say they feel connected to a community, with many of them finding a sense of community on social media platforms. Swift joining the app is just another way for her to connect with Swifities, and with TikTok’s ever growing subcultures, #SwiftTok is certainly one to pay attention to as her devoted fans continue to infiltrate the app to keep tabs on what Swift might post next. 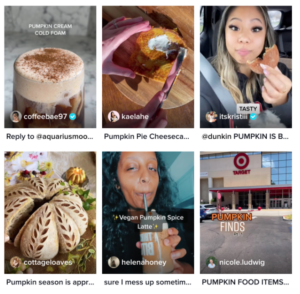 (4.8B Views)
At the end of last September, we told you users on TikTok were really excited about the beginning of fall, and it seems like they’re getting a head start this year—a full month in advance. In the last few weeks, the hashtag #PumpkinSeason has been circulating on many users’ “For You” page, racking up over four billion views so far—two billion more views than last year. Many of the videos feature users sharing their favorite pumpkin spice lattes (a Millennial favorite, of course), autumn decor, their excitement for Halloween, and yes, literally posing with pumpkins. YPulse’s PULSE on-demand survey found that last year 23% of 13-39-year-olds planned on attending or hosting fall or holiday events, while our 2020 Halloween report found that 89% of 13-39-year-olds planned on celebrating the holiday. Last August, brands began selling candy and Thanksgiving-themed dinners ahead of the holiday season to help stir customers’ excitement—and this year Hershey’s and Ferrero have already started getting in on selling sweet treats early. As the pandemic rages on, brands should pay attention to the seasonal hashtags bringing joy into young consumers’ lives during an ongoing difficult period, and know they may want to start the joy of the holidays earlier than ever. 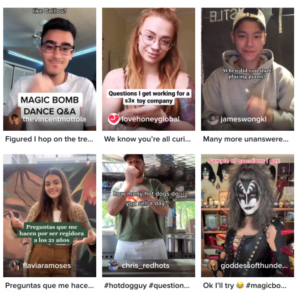 YPulse’s Borderless Culture trend research found that young people are interested in listening to music from other countries, and enigmatic Vietnamese artist Hoàng Read’s “The Magic Bomb (Extended Mix)” is a song that has taken over the app as users participate in the #ChoppingDance challenge (or what some have referred to it as the Magic Bomb dance). The dance movie is simple enough, and features users dancing along to the song by frantically banging their fists together to the rhythm of the song. While dance videos began appearing on many Vietnamese users’ accounts earlier in the year, the beat started catching on in other parts of the world at the very end of July when TikTokers started using it to make Q&A videos. As part of the #ChoppingDance challenge, which has 171.5 million views, users answer “questions they get asked all the time,” while bumping their fists together at the end of each question. Users have used it to answer questions related to their race and cultures, religion, sexual orientation, living situations, and even what industries they work in. User @kylecapener participated in the challenge to answer questions he gets about being a Millennial who still lives with his parents to save money, while @lovehoneyglobal answered questions about what it’s like working for a sex toy company. Some healthcare professionals also began using it as a way to dispel myths and answer questions about common health concerns. The trend seems to be reframing celebrity Q&A as well as celebs make their own #ChoppingDance videos. Olympic athletes like Laviai Nelson and Monica Aksamit did the challenge during the Tokyo Games to answer questions they often get in their respective sports. JoJo Siwa answered questions regarding her relationship and why she doesn’t wear a bow anymore, while singer-songwriter Meghan Trainor participated in it to answer questions about her music and love life. Meanwhile, Drew Barrymore made her TikTok debut this week participating in the challenge while recreating the character of Josie Geller from her ‘90s romcom Never Been Kissed. 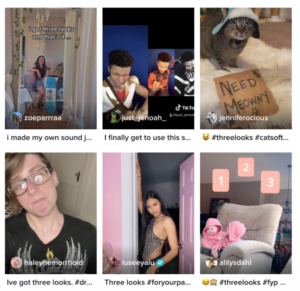 (69M Views)
The #ChoppingDance challenge wasn’t the only challenge to take over this month: A hashtag challenge featuring users showing their “three looks” a.k.a. the three very different modes they channel throughout the day. The audio used for the challenge includes retired YouTuber Jenna Marbles’ song “Three Looks” combined with three songs from Bo Burnham’s Netflix comedy special Inside. (While a previous challenge from earlier in the year featured only Marbles’ track, the more updated version added the new songs from Inside following its premiere this summer). The hashtag #ThreeLooks currently has 69 million views, and users introduce their clips with Marbles singing “I’ve got three looks and that’s it” at the beginning before cutting to Burham’s “Welcome to the Internet” to represent hyper behavior, “Look Who’s Inside Again” to display either a tired or more calm demeanor, and “Bezos I” to highlight their confident and hard working manner. While some young people have used the challenge to shine a light on serious conditions like ADHD, anxiety, depression, and other mood disorders, some have taken a different approach by showing the various moods their children and pets display in the course of a full day. Since the beginning of the year, fun challenges like the #BussItChallenge and #SilhouetteChallenge has become a hit as a way for young users to express themselves, and allow them to show different sides of themselves creatively. 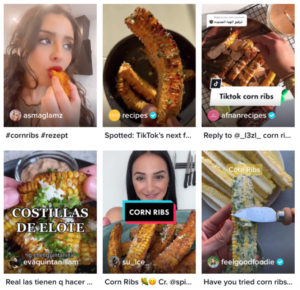 (12.3M Views)
Of course, we couldn’t end this month’s hashtag list without mentioning one of TikTok’s endless food trends. Gen Z and Millennials listed vegan and vegetarian diets as a top health and wellness trend they’re into, and it looks like TikTokers have given BBQ ribs a veggie twist—with #CornRibs. The hashtag currently has over 12 million views, and attention for the dish circulated online for the last month, with TikTokers slicing cobs of corn into vertical sections, adding their favorite seasoned sauce or spread, and cooking or grilling it like they would pork or beef ribs. Once they get heated up, the corn slices supposedly curl up just like its meat-based counterparts. While a few local restaurants like New York-based Momofuku Ssam Bar say they have been serving it for years (executive chef Max Ng reportedly invented it for their establishment), even more began adding the dish to their menu due to its recent rise in popularity. But it isn’t the only veggie or fruit-based food trend that’s been trending on the app: #snickles (a.k.a a Snicker inside a pickle) and #WatermelonPizza divided the internet this month—so much that after Domino’s tried the latter trend, some users weren’t exactly too thrilled about it. Meanwhile, after a YouTuber went viral for talking about grilled sunflower heads last year, it saw a resurgence on TikTok in the last several weeks as young people look for summer dishes to munch on before the season ends. There seems to be an endless appetite for creative takes on recipes on the app—a huge opportunity for brands.

North America
The Top Retail Apps That Gen Z & Millennials Are Using
What brand's / store's app do young consumers use? We asked, and these are ...
North America
Pretty Much Everyone Is Playing Wordle on The Viral List
Wordle (no, it’s not an app) is the new Words With Friends, the Golden Globes Awards ...
North America
Virtual Concerts Aren’t The Only Way Musicians Are Reaching Young Fans
In a time where concerts have become a rarity, some of young people’s favorite music ...