How Activism on TikTok is Leading to Real Change

We’ve told you about the many ways Gen Z and Millennials have changed activism, and how they’re naturally bringing it online. Our Not Waiting on the World to Change trend research found that 57% of 13-39-year-olds believe that they have the power to change things in the real world if they make enough noise online, while 42% of 13-39-year-olds have used a hashtag on social media to support a social movement. While these generations were once accused of “slacktivism” for their social media-fuelled social good efforts, they have been witness to those efforts and online movements resulting in real change in the real world.

Now, that social media activism is being fostered on the app that has quickly become one of Gen Z and Millennials’ favorites: TikTok. One researcher told the New York Times that they were struck by how “front-and-center youth identities are on TikTok” compared to other social media platforms, and it seems that the app is naturally lending itself to young consumers’ rallying around social issues—and calling out inequalities. Following last summer’s Black Lives Matter protests, young users called out the app for censoring Black creators,  amplifying the movement by taking TikTok to task on their own platform. Issues like the #StopAsianHate movement, climate change, and LGBTQ+ rights have taken the forefront on the app, and examples of young users organizing on the app to create real world change have been growing. During last year’s presidential election, TikTokers played a massive role in organizing a “mass false-registration drive” ahead of Donald Trump’s rally in Tulsa, Oklahoma, which resulted in many of the seats being empty. That massive political trolling effort made headlines, and called attention to the power TikTok could play in politics and social justice, but it’s far from the only example of activism playing out on the app. Here are four other pivotal activism moments from the last year that have resulted in accountability and  real world changes: 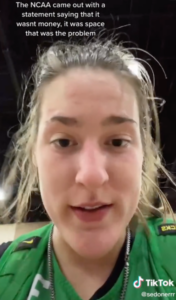 Exposing the NCAA Inequalities
Over the summer, the NCAA passed a policy that allowed young athletes to be paid for their NIL (name, image, likness) after years of protests from young athletes. But even before the “long overdue” changes, young athletes have been calling out the association for other forms of inequality. And in late March, TikTok became the forum for major criticism of the organization when Stanford sports performance coach Ali Kershner shared a post on Instagram, receiving over 100K likes, that showed the differences between the men’s and women’s tournament bubbles during the March Madness basketball tournaments. Meanwhile, Oregon Ducks forward Sedona Prince followed up with a video on their @sedonerrr account on TikTok that received over 12 million views, of the “embarrassing disparity” between the weight rooms for the tournaments, which featured a “Costco-sized Schwarzenegger-tastic hall of squat racks” for the men, while the women got much smaller equipment, like a “sad tower of dumbbells that looked borrowed from the basement of a discount motel.” Prince also used the video to call out the association’s claims that it was the space and not the money that prevented them from giving the women’s team equal resources,showing all of the “extra space” next to the tower of dumbbells. They used the hashtags #ncaa, #inequality, and #fightforchange to tag the video, and many of the comments were filled with fans’ support and praise for speaking up. The posts got so much attention that the NCAA quickly apologized, and by the following weekend, had “scrambled” to upgrade the women’s tournament gym—complete with updated lighting. Prince followed up with a video on TikTok a few days later showing off the new weight room and thanking the NCAA for listening to them, and a video on Twitter with the caption “Social media is powerful. Thank you for all of y’all’s support.” 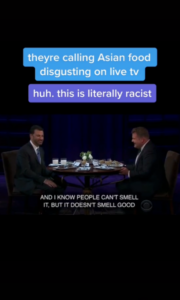 Calling Out James Corden’s “Spill Your Guts” Segment
The Late Late Show host and rat costume enthusiast James Corden has for some time included a“Spill Your Guts” segment on his show that forces celebrity guests to choose between answering a tough question or eating something “unusual” from a different country—but thanks to TikTok, the show (and Corden) has been taken to task for the bit’s insensitivity and racism. However, earlier this year, TikTok user Kim Saira made a video that has received 2.9 million views with the caption “um this tv segment is racist af,” calling Corden out for featuring embryonic duck eggs, chicken feet, and other cuisine that are “regularly eaten by Asian people.” She added that the “Carpool Karaoke” creator should also apologize and donate to organizations helping Asian businesses. After the video, Saira created a petition on Change.org to remove the segment from the late night talk show, and gathered 47,766 signatures. Because of the petition, which eventually reached Corden, he adjusted his segment to update the foods that are used. During an interview with Howard Stern, he said: “The next time we do that bit we absolutely won’t involve or use any of those foods. Our show is a show about joy and light and love—we don’t want to make a show to upset anybody.” While Saira called Corden’s statement a “non-apology,” she continues to use her platform to call out examples of racial injustice against the AAPI community. We told you that the #StopAsianHate movement has taken off in the last year amid reports that anti-Asian attacks were on the rise, and young activists have been increasingly finding ways to support the AAPI community. 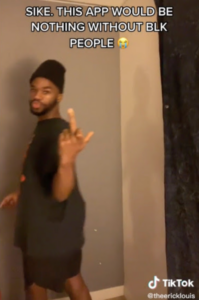 Black TikTok Creators Going on Strike to Protest Cultural Appropriation
Black creators on TikTok have been using TikTok to protest racial inequalities, from fighting back against censorship on the app itself through the #ImBlackMovement to speaking up during the Black Lives Matter protests last summer. And in April, a segment on NBC’s The Tonight Show Starring Jimmy Fallon where the late night talk show host invited TikTok star Addison Rae to highlight some of the platform’s most popular dances received backlash after viewers noticed that the dances, which were mostly created by Black dancers on TikTok, weren’t credited. After criticism swept through social media, the Tonight Show clip was edited to include the handle names of each of the choreographers, and Fallon invited the dancers on the show to be interviewed. But the scenario set off a chain of events on the app. A few months later, Black creators on TikTok went on strike, and refused to choreograph any new dances or trend to Megan Thee Stallion’s new song “Thot Shit,” as a way to keep TikTokers from capitalizing on more choreography originating from the Black community. TikTok user @Capkenknuckles responded to the strike in her video explaining: “We’re not making a dance for ‘Thot Shit.’ Sorry. We’re just gonna let them keep flailing,” talking about non-Black creators making up their own dances to the song. Meanwhile, other Black TikTok creators like @theericklouis and Jazmine Moore posted videos mimicking TikTok users who (poorly) attempted to create their own dance trend for “Thot Shit,” and Moore notes: “We contribute to the app so much that now people are slowly realizing that not every popular [influencer] is creating these things…it really does show that even when Meghan was giving instructions, they really didn’t know what to do without our help.” YPulse’s Not Waiting on the World to Change trend data found that 42% of 13-39-year-olds want brands to get involved with the Black Lives Matter cause, and  since the boycott, brands have found ways to give Black dancers their long overdue and rightful credits: Over the summer, Logitech teamed up with choreographer JaQuel Knight to honor several Black creators on TikTok by helping them start the process of getting their dances copyrighted. Keara Wilson (“Savage” dance), Young Deji (“The Woah” dance), Fullout Courtland (choreographers behind the “Say So” dance Doja Cat performed at the 2020 Billboard Music Awards), the Nae Nae Twins (“Savage Remix” dance creators), Chloe Arnold (choreographer behind “Salute A Legend” for Syncopated Ladies), and Mya Johnson and Chris Cotter (“Up” dance) were among the creators currently working with Knight and Logitech. 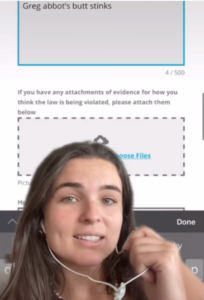 Flooding The Texas Anti-Abortion Site With Fake Reports & “Shrek Porn”
After a law in Texas restricting abortions went into effect at the end of last month, the state’s largest anti-abortion group, Texas Right to Life, created a site where “pro-life whistleblowers” can anonymously submit reports of those who are “ilegally” obtaining or facilitating abortions. However, TikTokers who were against the state’s new law caught wind of the site and began flooding it with “bogus” tips. A developer on TikTok who goes by the alias Sean Black told the New York Times that he developed a script that automatically generated fake reports to the site, and while it initially tried to block him, he released a shortcut for users with an iPhone or iPad to auto-create fake reports using randomly generated zip codes from Texas. According to Black, more than 7,200 people clicked on his script, while Linktree reported that more than 8,450 people clicked on the shortcut. Meanwhile, other TikTokers like @0liviajulianna and @victoriahammett encouraged their thousands of followers to spam the site. Some users used the anonymous submission form to attach “Shrek porn” to troll the group. In the same week, the site seemingly appeared to “periodically buckle” and drop under the load of reports.. YPulse’s causes/charity and activism report found that 33% of 13-39-year-olds say abortion / birth control is a social cause / issue they are passionate about—and TikTok activists swiftly acting to overwhelm the site proves that passion—and shows that TikTok is a platform where young people can organize to act en masse around a cause.

YPulse Business users can access the full Not Waiting on the World to Change trend report and data here.

North America
How Inflation is Impacting Back To School Shopping for Young Consumers
Back to school season is here, but inflation will definitely be impacting Gen Z and...
North America
Gen Z & Millennials Aren’t Turning to Experts for Wellness Information
Wellness professionals aren’t at the top of their list for wellness information any...
North America
Young People Are Seriously Done With Facebook on The Viral List
TL;DR Facebook is in hot water with already waning young users for supplyi...