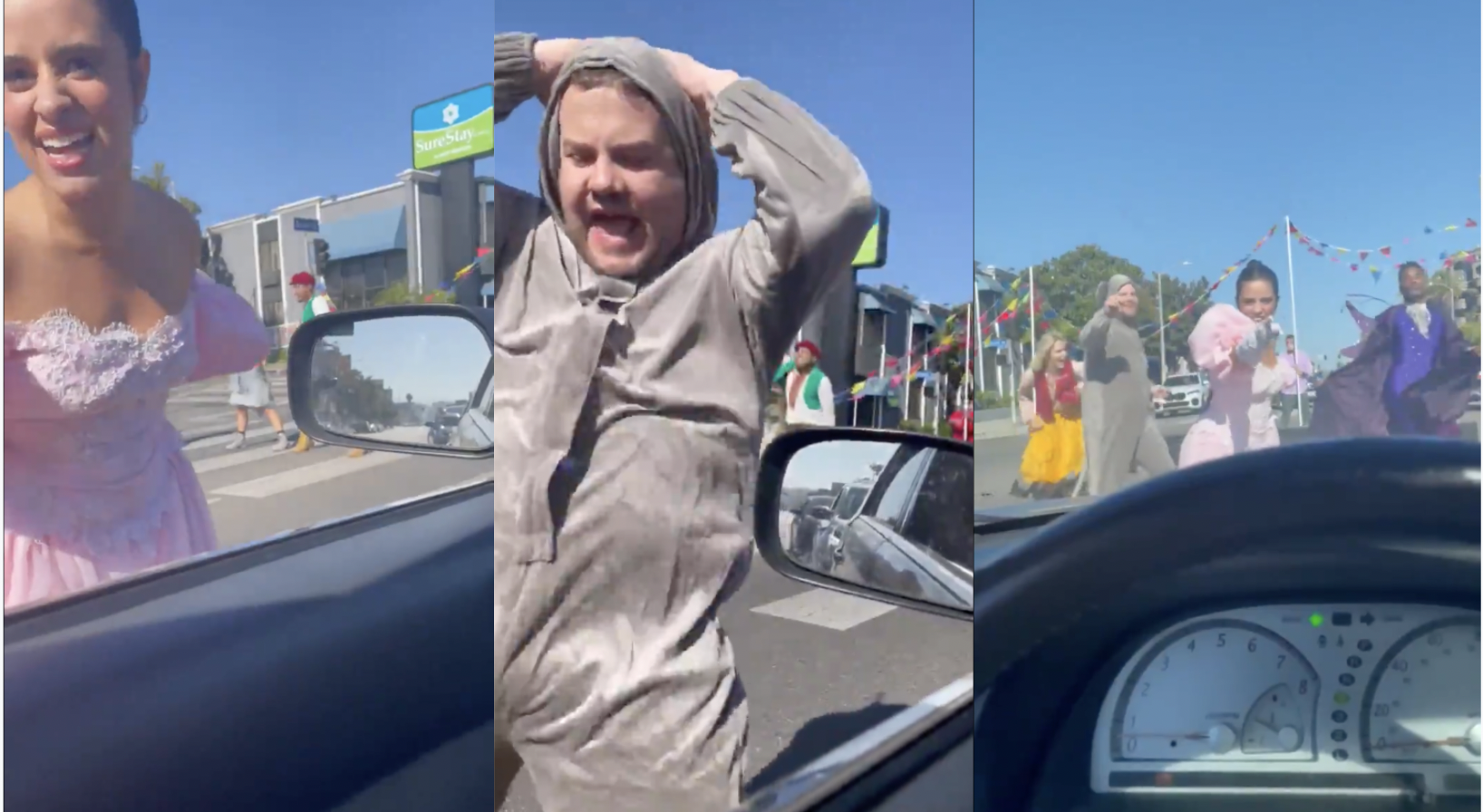 The Cinderella cast plagued L.A. drivers with a random (not to mention strange) flash mob, Kanye West’s “Donda” album is going viral for several reasons, social media can’t stop roasting He’s All That on Netflix, “Did it Hurt” memes are flooding the internet —plus more youth-focused news taking over social media this week! 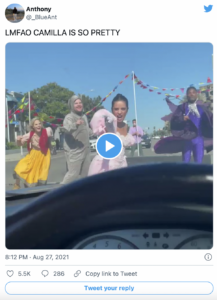 The Cast of Cinderella Plagued L.A. Drivers With One of The Strangest (And Rather Unsettling) Flash Mobs Ever

To promote Sony’s upcoming Cinderella film featuring Camilla Cabello, Billy Porter, James Corden, and Idina Menzel, the cast participated in a (cringey) flash mob (now known as a segment on The Late Late Show called “Crosswalk The Musical”), dancing to J. Lo’s “Let’s Get Loud.” The L.A. drivers who witnessed the event were quick to show their confusion on social media: Twitter user @_BlueAnt was one of the first to post a clip from the flash mob—giving the internet a scary image of a hip thrusting James Corden in a rat costume. The vid has more than 18.8M views and 2,500 quote tweets from Twitter users flaming the flash mob stunt and ripping on James Corden’s rat costume (not to mention the hip thrusts that no one asked for). One retweet from @BigRadMachine reads, “LA should go back into lockdown for this alone,” and @PaladinAmber posted, “Imagine having to explain to your boss that you’re going to be late to work because James Corden dressed in a rat suit was thrusting at cars in the middle of traffic???” Camilla Cabello and Idina Menzel have responded to the flash mob incident with Cabello noting, “It was really fun!” and Idina Menzel sharing a less positive reaction: “It was really hot. I burned myself getting up on the car. The metal [of the car] was very hot.” Cinderella airs on Amazon Prime today (September 3), and while it’s doubtful  the cast’s unwanted flash mob will impact viewing (positively or negatively) it certainly got the internet talking about the film. 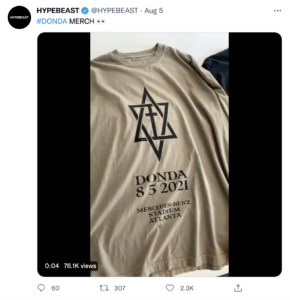 The rapper’s highly anticipated “Donda”album was officially released on music streaming services Sunday morning, and within 32 hours a Spotify representative confirmed that it “broke the record for the most-streamed album in a day so far in 2021,” topping Olivia Rodrigo’s “Sour” which formerly held the record after taking the internet by storm in May. Currently, nine songs from the album hold top 30 spots on Spotify’s Top 200 Chart, with six more holding spots in the top 50. Several artists including Ariana Grande, The Weeknd, and Jay-Z collaborated with West on the 27-track album, and West’s third and final Apple Music livestream listening session held ahead of the album’s release broke streaming records (once again), totaling 5.9M viewers during the event in the rapper’s Chicago hometown on August 26. And to make West’s “Donda” drop even juicier, the album merch—featuring neutral-colored long sleeve t-shirts stamped with a bolded, stretched-out Star of David with a thin cross in the middle—has been accused of ripping off Infinity G8ds’ logo. West had reportedly been in communication with Infinity G8ds earlier this summer, to discuss how the artist  “was interested in [Infinity G8ds’] creative process behind the design and the materials [they] used,” but after dropping the “Donda” merch it was clear that the merch design bore a “striking resemblance” to the apparel brand’s design, garnering a response from Randy Dawkins (creative director for Infinity G8ds): “This situation was definitely unfortunate, but we have to speak up about it to defend our brand because that could definitely [hinder] us in terms of him putting that out.” While West’s “Donda” has taken over the internet this week for several reasons, the album’s Spotify streaming record signals fans’ excitement for the new album after debuting one year later than expected. 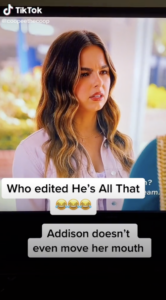 Teen movies have been making a comeback in the Netflix era with original films like The Kissing Booth and To All the Boys I’ve Loved Before franchises. And while fans were pumped for Netflix’s modern take on the 1999 film She’s All That, they also couldn’t help but flame influencer Addison Rae Easterling’s acting performance and call out the film’s continuity errors. #HesAllThat has garnered 774M views on TikTok, filled with strong reactions from users. Popular videos include: one user dubbing it “the worst movie released in 2021” (6.2M views); another calling out the poor editing in the film (4M views); and @theonlycb3 (a TikToker known for recreating scenes in teen movies) mocking some of the film’s iconic moments (16.3M views). Others can’t stop talking about the major branding and product placements that appear in the movie. Eos skincare, Old Navy, Pizza Hut, CORE Hydration Water, KFC, Smartfood Popcorn, and even an ADT home security alarm make some not-so subtle appearances, making viewers wonder who (or what) the film was really created for—Gen Z or brands? Despite not having a cameo from Freddie Prinze Jr., appearances from OG stars (hi Rachael Leigh Cook and Matthew Lillard), the new cover of “Kiss Me,” and the film’s take on influencer culture has made He’s All That a must-watch for Gen Z and Millennials—whether they love it or hate it. He’s All That currently holds the No. 1 spot on Netflix’s Top 10 Trending Movie List, has 4.4 out of 10 stars on IMDB, and 31% on Rotten Tomatoes. Despite some not-so rave reviews from young people, it’s a “Hallmark film for Gen Z” in all of its cheesy, nostalgic, and low-quality editing glory.

“Did It Hurt” Memes Are Taking Over The Internet

Memes playing off the phrase “Did it hurt” are circulating social media, nodding at the age-old pickup line, “Did it hurt?…When you fell from heaven?”—and it’s perhaps one of the most participated-in meme trends since Bernie and his mittens. Twitter users are putting their own funny spin on the trend, like @roxiqt’s not-so subtle Mr. Brightside riff: “Did it hurt, When you were falling asleep and she was calling a cab and he was having a smoke and she was taking a drag?”; user @sherrysworld took a darker approach, “did it hurt? When you started working and realizing that you’ll have to spend the next 40+ years of your life doing this?”; and @Dobrenkz still isn’t over last week’s viral trend: “Did it hurt? When you fell from the milk crates”. Brands are also participating in the trend (and going viral for it): Instagram shared, “Did it hurt? When an egg got more likes than you? (amassing 2.4K likes)”; Xbox posted, “Did it hurt? When you got handed the player 2 controller” (garnering 24.2K likes); and Crocs taking aim at former haters with, “Did it hurt? When you said you’d never wear crocs but now you own multiple pairs?” (2.3K likes). Memes are a staple of internet culture for young people, and when successfully executed, meme-able moments are one way brands can connect with the trends young consumers are spearheading—if they act fast enough. 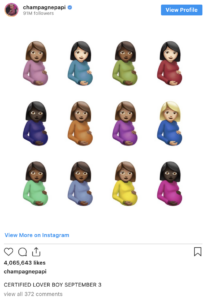 Lil Nas X made a parody album cover of Drake’s “Certified Lover Boy,” then released the ethereal artwork for his “Montero” album, and announced he was “expecting” with “over-the-top announcement photos” to further tease the album dropping September 17.

ABBA made their TikTok debut with a piano version of “Dancing Queen” (amassing 6.5M views), and fans couldn’t be more excited for the band to be getting in on the trends their songs have started on the app.

Singer-songwriter Jabari Banks has been cast as the new Will for The Fresh Prince of Bel-Air reboot.

Sam Smith’s “Like I Can” is resurfacing on TikTok, with more than 1.6M videos using the artists’ 2014 track.

TikToker @corporayshid is going viral for sharing the all-too-familiar realities of WFH—one of his most popular clips was posted this week, amassing 823.4K views.

A Peter Thomas Roth eye cream is blowing up on TikTok after one user shared how the product instantly smooths under-eye bags—the clip from @trinidad1967 has more than 22M views and has garnered positive reactions from dermatologists and skincare experts.

TikTokers are listing their romantic dating history as if they were used cars in what’s dubbed as the “car trend”—and their clips are garnering thousands of views.

Millennials are sharing their “old people tendencies” on Twitter.

An 11-year-old drummer known for sharing rock band covers on YouTube performed on stage with the Foo Fighters.