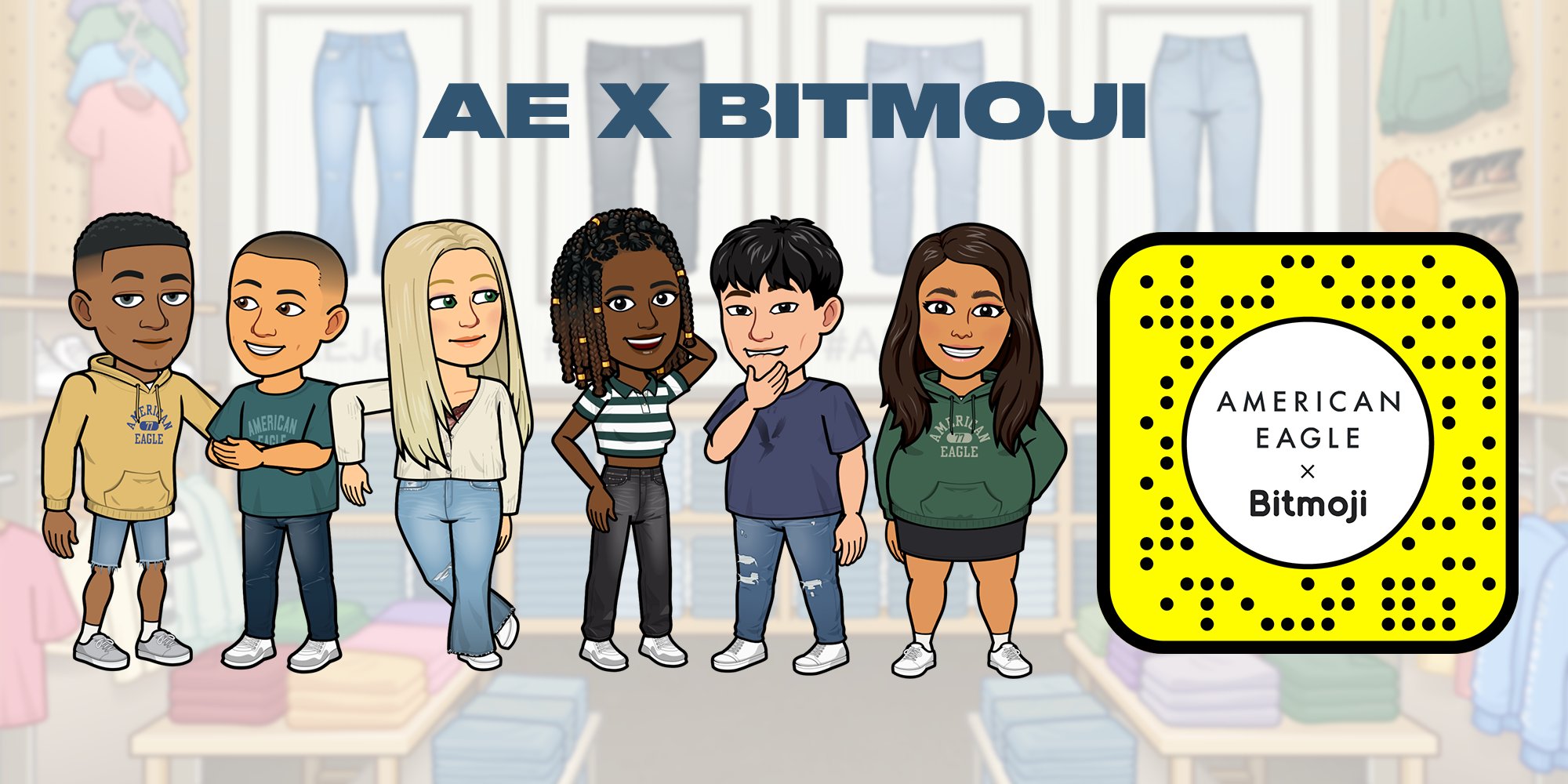 Are you still forgetting Snapchat’s ability to reach Gen Z and Millennials? Here are six more brands getting on the app to reach young consumers…

We told you how brands shouldn’t be sleeping on Snapchat as it saw massive growth last year—and the company is only continuing to grow. Last month, Snap reported that they added 13 million daily users during the second quarter—a 23% increase from the year before. Meaning that 293 million people use Snapchat every day globally—up from 173 million during this time period four years ago. Their revenue also soared 116% to $982 million—making it “a faster growing business than Twitter or Facebook.” According to the company, user growth from the second quarter came from outside its core markets of North America and Europe, where advertisers typically pay more to reach users, and Snap CEO Evan Spiegel believes Snapchat’s user base will continue to grow even faster post-pandemic since the app is “designed to be used out and about with friends.”

YPulse’s most recent social media monitor survey shows 57% of Gen Z and 39% of Millennials are currently using Snapchat, and they’ve certainly invested into more features that are appealing to young users: They’ve continued to heavily lean into augmented reality with the debut of their new Spectacles glasses, AR displays, fun filters, and most recently, AR shopping. YPulse’s Retail’s New Reality trend research shows how brands adopted AR experiences during COVID to engage with online shoppers in new ways—and last month, on top of their acquisition of Fit Analytics and Screenshop, Snap acquired Vertebrae, a company that helps brands turn their products into 3D goods. Once available, brands will be able to upload AR versions of their goods via a self-service system on the platform, allowing users to shop and discover just about anything straight from the app. The purchase signals how Snapchat wants to make waves in the online shopping space by bringing even more AR displays of products to users’ phones.

Brands like Ralph Lauren, Dior, Headspace, and A+E Networks all jumped on the platform to reach young users. Now, more than halfway through the year, even more brands have jumped on the app to come up with interesting and innovative ways to target young users. From taking full of advantage of Snapchat’s Mini feature to creating Bitmoji collections to debuting more AR filters, here are six ways brands are tapping the app to reach young users:

HBO Max previously reported that 43% of their subscribers are under the age of 25, while YPulse’s most recent media consumption report shows that 22% of 13-39-year-olds watch HBO Max or HBO weekly. Now, they are the first major streaming platform to offer sample episodes via Snapchat’s Mini feature. The streaming service released free episodes inside the social app to appeal to young audiences: Using Snapchat’s HBO Max Mini feature, they launched a total of 14 free episodes (mostly pilots) from Gossip Girl, Euphoria, Game of Thrones, The Flight Attendant, and Genera+ion in a play for more young subscribers. Snapchatters are able to invite their friends to join and watch the shows simultaneously, and users who are 18+ will be prompted with a link to subscribe to the streaming service after an episode is viewed. YPulse’s latest media consumption data also shows that 63% of Gen Z and 62% of Millennials are using their smartphone to watch video content weekly or more often, and since Snapchat is one of the top platforms Gen Z is using to watch content, HBO Max’s free content ploy could be a smart move to garner those new subscribers. 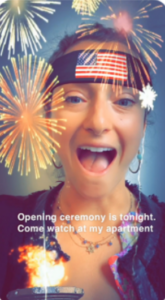 NBC Olympics’ Shows
The Tokyo Olympics had lower ratings on traditional TV, but it was a smash on social media. One of those ways? Through Snapchat, of course. Last month, NBC Olympics announced that they would be producing five daily shows from Tokyo for Snapchatters in the U.S. (The two companies previously partnered for the 2016 Summer Olympics in Rio de Janeiro as well as the 2018 Winter Olympics in South Korea). Snap previously reported that 90% of its viewers for content from the Games in PyeongChang were under the age of 35—and they planned to have “more than triple” the number of episodes of the 2018 Games. The shows included “NBC Olympics ICYMI,” a daily show focused on the best moments from the Games as well as culture, memes, storylines, and trends, hosted by Jacques Slade; “NBC Olympics IRL,” which was a roundup of the best Olympics-related social clips; “Cashing Gold,” which focused on getting to know the athletes of Team USA; “NBC Olympics Highlights,” which highlighted action from the Games in real-time through broadcast footage and editorialized captions; and “NBC Olympics Spotlight,” which took a deeper look in near-real-time at the biggest events happening that day. Meanwhile, the @Olympics account on Snapchat featured “Train Like an Olympian,” an AR lens that used body tracking technology to prompt users to stay fit by completing three exercises before time runs out, and rewarding those who succeed with virtual fireworks as well as an AR lens that allowed users to don USA-themed sunglasses, red, white, and blue face paint, and a gold medal. Sports content has certainly thrived on the app: The platform notes that there are 90 million sports fans in North America on Snapchat alone, with 87 million watching sports content each month. According to the company: “It will be a sports year to remember, and it will be captured, shared, celebrated, and consumed on Snapchat.” 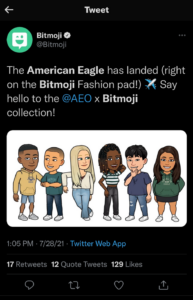 American Eagle’s Bitmoji Digital Clothing Collection
We told you about how parents and students feel about back-to-school shopping this year, and as a way to appeal to those teen shoppers, American Eagle used influencers and AR on Snapchat to reach them. The teen clothing brand is “celebrating the reunion of friends” for its “Future Together. Jeans are Forever” back-to-school campaign. American Eagle tapped Jenna Ortega, Addison Rae, Caleb McLaughlin, and Outer Banks stars Chase Stokes and Madison Bailey for the 30-second spot. Meanwhile, the brand also followed in Ralph Lauren’s footsteps and targeted teen shoppers with an AR try-on experience via Snapchat along with a Bitmoji digital clothing line. With this year’s back-to-school season being more emotional than ever as more teens return to in-person conditions, American Eagle is increasing its commitment to young shoppers with new digital experiences that (quite literally) speak their language.

We told you about the many ways online shopping is becoming more engaging for young consumers, and as mentioned, Snap is leaning into AR shopping with their latest acquisition of Vertebrate. But with Gen Z and Millennials’ interest in secondhand shopping stronger than ever, resale marketplace Poshmark is also jumping on to the platform to reach Snapchat’s secondhand shoppers: Poshmark Mini is Snapchat’s newest social shopping feature planning to bring “the thrill of the Poshmark treasure hunt” to the app. Like many other shopping outlets, Poshmark leaned into social media during the pandemic, and says its users engaged in more than 30 billion social interactions (thanks to young people). The new social shopping experience allows users to browse more than 200 million items for sale, interact with other shoppers during real-time “Posh Parties,” and view what brands are trending. YPulse’s most recent social media monitor data shows that 87% of 13-39-year-olds believe social media can be a place to find products or services to buy, and Snapchat’s recent collaboration with Poshmark could change the game for the secondhand shopping industry.

Invstr’s StockStars Game
YPulse told you how apps are making the world of investing less intimidating and more engaging, and following the Reddit-GameStop frenzy, Snapchat made it even more exciting for young people to learn the ropes of investing. The social platform teamed up with trading education company Invstr to launch “StockStars,” a virtual portfolio game where users can play around with $1 million in fake money, invest in portfolios that mimic real-world market conditions, and compete in challenges with friends. It uses industry lingo while also providing educational resources that teach players the intricacies of the stock market. While apps like Robinhood and Reddit have made it easier for young people to learn about investing, StockStars aims to help Gen Z and Millennials build the confidence to invest in real-life portfolios by messing around with (fake) virtual currency inside one of their favorite apps. 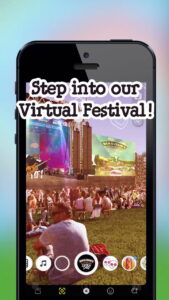 Ben & Jerry’s Peace Pop Festival
You already know that AR has become a bigger part of Gen Z and Millennials’ lives, and earlier this spring, Ben & Jerry’s launched their own AR experience with Snapchat to connect with Gen Z and bring their “euphoric taste to life.” Users were able to participate by scanning Ben & Jerry’s “Peace Pop” ice cream pints—which launched earlier this year—on Snapchat, and the lens transported them to a virtual summer festival stocked with ice cream vans and performances. The lens launched in the U.S. in May, while global markets including the U.K. and Germany were able to join in on the virtual experience later in the summer. Virtual concerts and events were everywhere last year, and with more brands like Ben & Jerry’s leaning into the trend—with the help of Snapchat—the trend is not going away anytime soon.