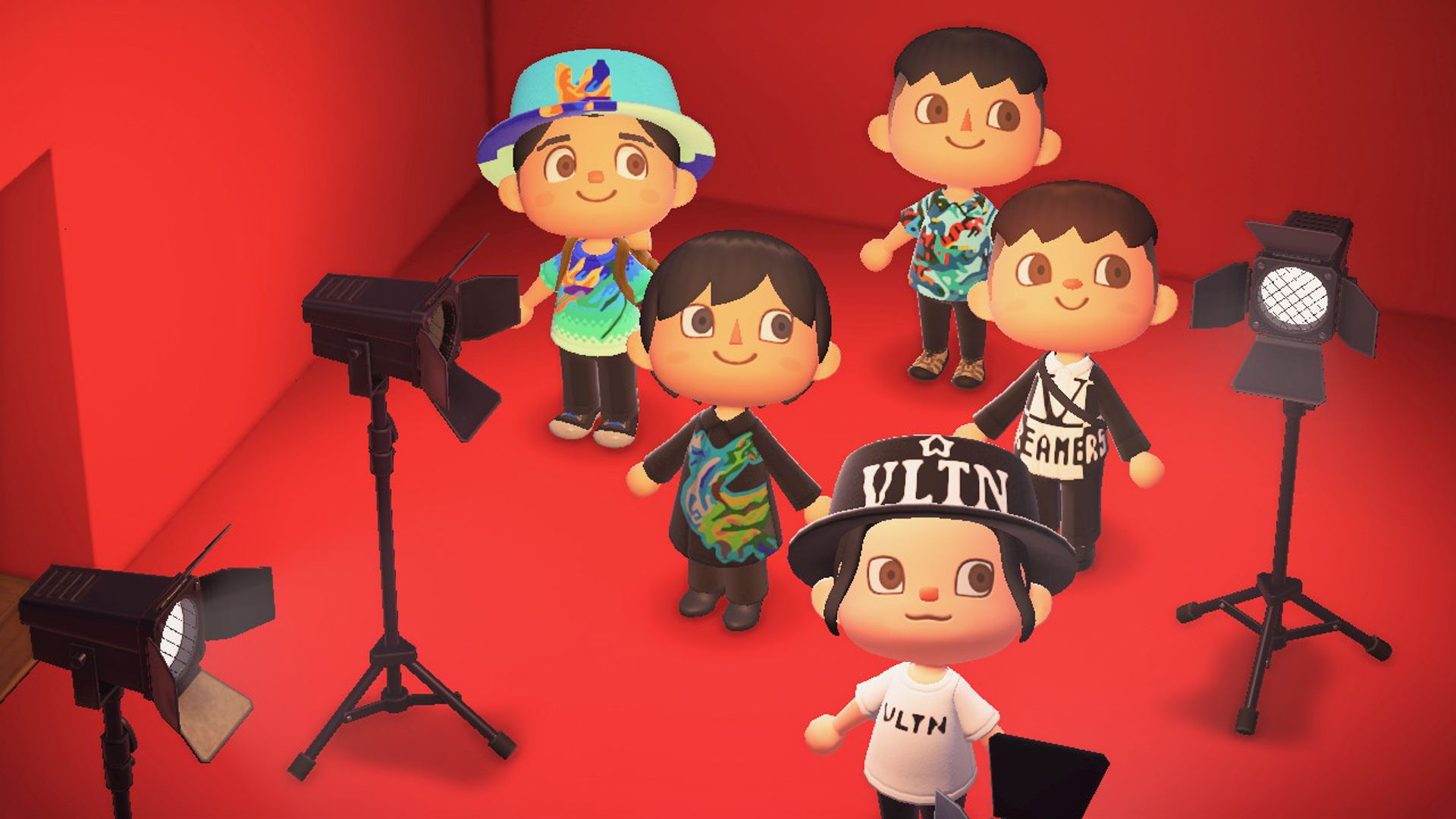 With young consumers spending more time inside video games, fashion brands are finding new ways to get their attention there, sparking a new marketing trend for the industry…

Gaming was hotter than ever last year. YPulse’s Gaming trend research found that 94% of 13-39-year-olds are playing video games in some capacity, and as games and gaming platforms like Animal Crossing, Fortnite, and Roblox surged in popularity—brands have found their way into those spaces as an increasingly important way to market to those young consumers.

For beauty and fashion brands, that has meant (for the most part) taking a new approach to design, releasing. digital clothing lines often created to exist only in the games themselves. The gaming world has quickly become the latest hotspot for Gen Z fashion, spaces where their characters are wearing the hottest styles even if the. players themselves can’t. According to Elite Daily, players have been cultivating their own “virtual fashion ecosystems” in video games as foot traffic in physical malls lower. Pre-pandemic, sportswear brands like Nike and Adidas were already getting into in-game fashion via partnerships with Fortnite. But the digital designwear trend accelerated massively during the pandemic, as brands were forced to get more creative with marketing, leading to a slew of high fashion brands infiltrating multiple gaming platforms. We’ve rounded up some of the biggest examples of high gaming fashion across five massively popular platforms to show how much digital luxury design has grown: 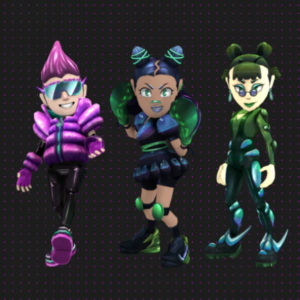 YPulse found that Roblox is among the top video games that young consumers use on a weekly basis. In the game, players have used their allowance to “buy digital clothes” with their “robux” (the game’s native tokens)—and fashion brands have taken advantage of that: Gucci leveraged their virtual forum “Campaign Sneaker Garage,” which garnered 22K members on the platform. They created the Gucci Virtual 25 sneakers, which were designed by Gucci creative director Alessandra Michele, featuring “a chunky, neon green and pink look.” Nike even hosted an Air Max Day activation on the platform to market their shoes. Meanwhile, influencers like Missmudmaam and Erythia have “sold millions of original Roblox items” of their designs. Missmudmaam said: “Fashion is a huge part of the Roblox platform as is evidenced by numerous dedicated groups, games, homestores, and fashion catalogs available to join, play, or purchase from. There are runway events happening on Roblox where, just like in the real world, models are hired to walk a catwalk; there is music, lights and spectacular effects. There’s an audience that usually has an option to purchase the items immediately.” 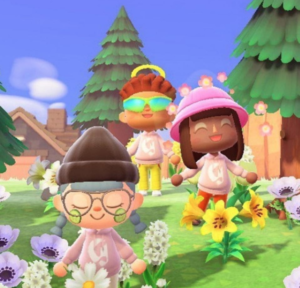 First, brands like Highsnobiety and 100 Thieves used the game as a “media channel” and created virtual clothing collections for its players in the spring. Meanwhile, Gen Z-favorite beauty brand Glossier used the game to promote its popular pink hoodie from their GlossiWEAR collection, which was digitally re-designed by Nook Street Market. The rest of the fashion industry decided to jump on the trend too. Valentino, Anna Sui, and Sandy Liang have created custom garments for the game, while “dozens” of Instagram accounts have since emerged to showcase “runway-inspired designs” from Dior, Sports Banger, and Louis Vuitton. YPulse called out this rising trend in our Brandoms report, which found 42% of young consumers have purchased something that prominently features their favorite brand’s logo. 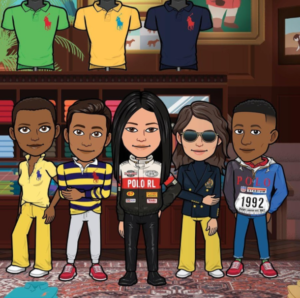 Snapchat Bitmoji
Snapchat has had a massive year of growth—and YPulse’s social media monitor report found that Snapchat Bitmoji is among Gen Z’s top used social features, with 39% of 13-18-year-olds reporting they use it. And in the last year, many fashion brands have been utilizing the feature as a way to market their new (digital) apparel and accessories. As young shoppers create retail’s new reality, Ralph Lauren and Snap teamed up for a “first-of-its kind” long-term partnership to create digital clothing pieces to be “worn” on Bitmoji, and for users to purchase online and in real life. The collection featured twelve pieces that include a rugby shirt, racing jacket, and double-breasted navy blazer. To see what the outfit looks like on their avatars, users could try them on with 3D Bitmoji Lenses. The dressed up avatar appears throughout Snapchat on the chat function, games, Snap Map, and of course, Bitmoji Stories. Snapchat also collaborated with Nike’s Jordan brand and Levi’s. Bitmoji’s most recent partnership was with Nickelodeon for a nostalgic collection of digital clothing that users can dress their avatars up in. The collection features designs from ‘80s and ‘90s hit shows like Garfield, Rugrats, SpongeBob SquarePants, and Teenage Mutant Ninja Turtles, and users can choose from nine curated outfits as well as mix and match from the offerings. At the beginning of the year, Snap reportedly tested a new clothing option that let users “choose a range of fashion items from different retailers” for their avatars. They report almost 70% of their users interact with friends with Bitmoji characters in some capacity. If Snapchat is able to “bring in more retailers,” the company would be able to “project a vision” of new clothes on behalf of the brands through these animated characters, which serves as “a vehicle for promotion and brand affiliation.” The end result will be a “win for both customers and the brand” as the latter will get the chance to show off new collections. 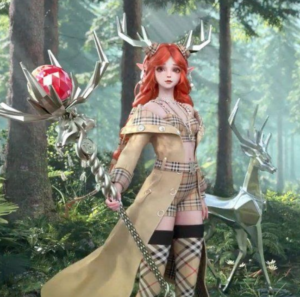 TiMi Studios and Tencent Games’ competitive multiplayer Honor of Kings is one of the biggest video games in China, and they teamed up with Burberry for new character skins for one of the game’s main characters. The two skins were designed with the “spirit of nature” in mind and will be available to buy in China. The collaboration is part of an ongoing trend of making branded skins for characters in games: Earlier this year, Final Fantasy XIII’s main character Lightning was a model for Louis Vuitton (who also designed in-game outfits for League of Legends characters), while streetwear brands like BAPE have designed skins for games like League and PUBG Mobile. 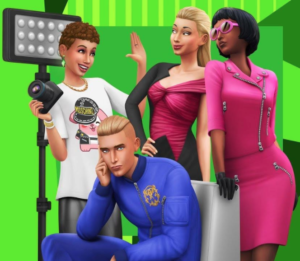 Sure, we told you how Electronic Arts’ The Sims was branching out to market themselves in new ways—including launching their own reality competition show. However, the game itself has become a popular spot for fashion brands to market themselves. Italian fashion brand Moschino teamed up with The Sims to create real clothes printed with icons and motifs from the video game, and created a digital fashion campaign for it in the game. Meanwhile, Roblox wasn’t the only gaming platform Gucci is working with: They created a digital fashion campaign for The Sims, too. Sheila Judkins, director of brand marketing at The Sims said: “We are seeing a strong increase in other brands wanting to be in our game. We do so in a way that best benefits our players through in-game content that they can use to create and play with life rather than putting advertisements into our game.” The game previously worked with MAC Cosmetics on a digital campaign for the beauty brand to market their makeup. 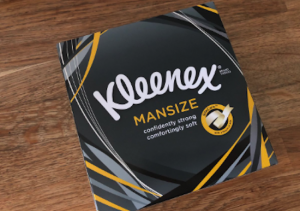