The last year has changed how Gen Z and Millennials shop, and what they buy. Here’s how six classic (a.k.a old) brands have found ways to stay relevant to young consumers during a crucial time…

Brands lucky enough to stand the test of time have learned to pivot and adapt—especially if they want to capture next generation consumers. And, quite frankly, those who don’t manage to appeal to rising young consumers are generally doomed to die out. That’s why, from McDonald’s to American Eagle Outfitters, successful classic brands aren’t afraid to change, and try new ways to attract young shoppers.

That’s arguably become more difficult than ever in the last year. The pandemic disrupted how Gen Z and Millennials shop, and because young people are spending so much of their time online, their patience is short. YPulse’s Retail’s New Reality trend report found that 82% of 13-39-year-olds who have shopped online during COVID have been shopping online more than they had in the past—and that means competition is easier to access than ever. According to a Sitecore study, Gen Z will quickly ditch brands with poor digital experiences with 80% of 18-24-year-olds saying they’re more willing to try new brands online than before the pandemic, and 57% saying they’re less loyal to brands than before the crisis. Thirty-eight percent say they allow a brand “just one second chance” to fix a mistake before switching to a rival, 74% say they’ll find another retailer if an online store is out of stock.

That being said, 2020 also presented a plethora of new opportunities for brands as young consumers became open to new products, and trying new brands—including ones that have been around for 100 years. Here’s how six long-lasting brands have pivoted, evolved, and even reinvented themselves to appeal to young shoppers in the last year (and yes, TikTok and influencers are involved)… 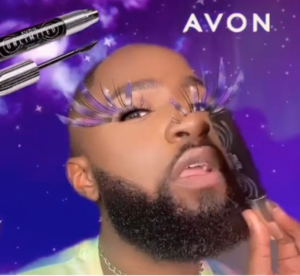 Avon
Since 1886, Avon has mostly been known for their door-to-door sales model—you know, “Avon ladies” touting brochures and selling a variety of beauty and wellness products to prospective customers in-person. But early last year, Natura & Co. acquired Avon with the mission to modernize the brand and reach a younger audience by turning their five million “Avon ladies” into influencers who promote the products on social media, mobile apps, and retail locations. (YPulse has found that 46% of young females have tried a new beauty or personal care item after learning about it from an online celebrity.) Prior to the acquisition, the company was struggling for some time and was “late to embrace” ecommerce.  Since then, Avon launched “Studio 1886,” an LA-based beauty studio which serves as their first in-person physical location ever. The 8,000 sq. feet space is “airy and modern, with pink and white interiors and tons of lounge space where reps can meet with their customers.” The plan is to use the location for live shopping events as well as half hour mobile-friendly segments where customers can connect with reps and be given interactive access to new products. Meanwhile, they’ve also been focusing on their “digital transformation journey” and went straight to the space where products are known to go viral. Last week, they unveiled their debut hashtag #LiftLockPop on TikTok, which currently has 2.7 billion views. As part of the campaign, they enlisted creators Scarlett Moffatt, Ryley Isaac, Rikki Sandhuu, Elizabeth Wosho, and Damilola Adejonwo to promote their Unlimited Instant Lift Mascara—and created an original song as well as an AR filter as part of the challenge as a way for them to try it on virtually. During the pandemic, beauty brands have been finding creative ways to reach young consumers especially as their relationship with makeup continues to change—and this move from Avon just proves how serious they are about reaching a new generation of customers. 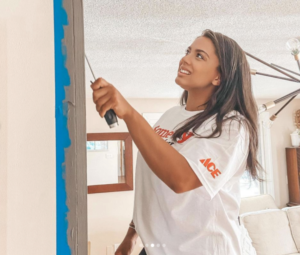 Ace Hardware isn’t usually the first brand that comes to mind when thinking about young consumers. But in the last year with young consumers spending most of their time at home, many of them have been inspired to start some projects. YPulse’s No Place Like Home trend research shows that 64% of 13-39-year-olds have become more interested in improving / fixing up their home, because of COVID-19—it was home improvement brands’ time to shine. In the last year, the nearly 100-year-old hardware retailer changed their marketing strategy by adding paid and organic influencers into the mix as a way to reach Gen Z and Millennial customers, who are usually first-time home buyers. Recently, the company worked with DIY influencers like Kelsey and Ryan Mansingh (@newbuild_newlyweds), Kristine Abram (@homewithkrissy), Melissa Tyler, and Angel Dooley (@massachusettsmama) to promote their new branded holiday. With “SomeDay,” the company wanted to inspire people “to take household projects they’ve put off and actually accomplish them.” During the “holiday,” the influencers tackled home projects like painting their hallways or painting their kid’s bedroom. While DIY influencers can sometimes be more costly than other influencers, Sway Group CEO Danielle Wiley told Digiday: “Brands need content for so many platforms today. It’s impossible for brands to keep up with that without outsourcing some to influencers. It’s the cost of doing business now to pull in an influencer to keep up with [the] volume of content expected.” YPulse’s influencers and celebrities report found that 77% of 13-39-year-olds have tried or learned something from an online celebrity. 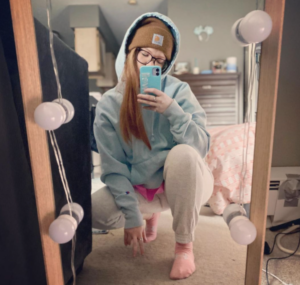 In the 132 years that Carhartt has been around, the brand has been “the unofficial uniform of many of America’s hardworking laborers.” Their core customers have typically blue-collar workers like electricians and linemen who wore their workwear garb—from their notable flannel shirts to their hefty jackets and beanies. But in the last few years, while maintaining their core demographic, they’ve also been able to attract a new generation of customers as well. Celebrities like Drake, Rihanna, Kanye West, Jamie Foxx, and Bella Hadid have all donned the brand and their notable logo in recent years creating more “brand awareness” and contributing to the “growing cultural clout” among young shoppers to help boost their business. In 2019, the company says it generated just over $1 billion in revenue. And while many clothing brands have suffered during the pandemic, Carhartt got a boost in 2020. Their online business never slowed down, and reportedly picked up following the first round of stimulus checks. They’ve also managed to build an organic social presence as well: The hashtag #Carhartt generates thousands of results on Instagram with posts full of young men and women “in urban settings wearing faded Carhartt Detroit jackets with Jordan sneakers and considered-looking jeans,” while the same hashtag has generated 305.4 million views on TikTok. Meanwhile, young resellers in the resale community have also been heavily into the brand. According to @AgedThreads, anytime they post anything Carhartt-related, buyers snatch it up “within minutes”—and the hashtag #vintagecarhatt on Instagram bringing up thousands of posts showcasing “weathered Carhartt reinforced-knee pants or work jackets.” YPulse’s Brandoms trend research explores how logomania has been prevalent in the last few years, and the Carhartt logo and brand has clearly become embraced by young consumers during this time, as they’ve looked for simplicity, comfort, and maybe a bit of timelessness. 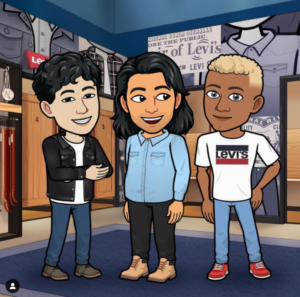 Since 1853, Levi’s has been known for their iconic denim. But even through decades of competition, the company has managed to stay a favorite among young consumers. It’s not a fluke—the brand has been proactive about evolving along with customers as well by prioritizing the next generations’ values. Our recent sustainability report explores how young consumers’ expectations for brands to combat climate change is already at a higher standard. As they continue to worry about climate change, Levi’s has taken initiative to become more serious about the issue. Last October, they partnered with Trove to launch Levi’s Secondhand, a “recommerce site” for previously worn jeans and denim jackets from the brand. Through the buyback and resale program, shoppers can not only buy pre-owned Levi’s pieces directly from the brand, but can earn gift cards toward future purchases. For any pieces that are “too worn to be resold,” the brand collaborated with Renewcell, a company that recycles fibers from worn out clothes into new ones. This week ahead of Earth Day, Levi’s also unveiled a “Buy Better, Wear Longer” sustainability campaign to “raise awareness about our shared responsibility for tackling the environmental impacts of clothing production and consumption.” Meanwhile, the company isn’t only prioritizing the issues most important to young people, but they’re hanging out in the digital platforms where they frequent as well. They were one of the first brands to find “early success” by selling products on the beta test for TikTok’s “Shop Now” feature, where they reported high engagement and increased site traffic. To drive that traffic, they partnered with various TikTok influencers who used the brand’s laser-powered 3-D customization technology to design their own denim. They also released a line of virtual clothing via Snapchat, which saw massive growth in the last year, on Bitmoji featuring jeans, trucker jackets, and Western shirts in multiple washes that shoppers can also purchase in real life. They even dabbled in the recent Gen Z versus Millennials skinny jeans feud by weighing in on their thoughts about the future of jeans—and how wide leg jeans (a.k.a “mom jeans”) are the new style. Despite some sales decline during the first quarter, Levi’s boosted their sales and profit outlook for the first half of the year, and is anticipating sales will return to 2019, pre-pandemic levels by the fourth quarter—and their shares are up nearly 25%. 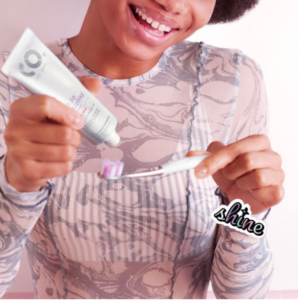 Sure, Colgate started as a simple toothpaste brand. But nearly 215 years later, they’re finding new ways to market oral care to a new generation—one that sees health as more than physical. Last year, the Colgate-Palmolive-owned brand addressed young consumers’ mental health by teaming up with Headspace to offer weekly programming in the “Hum by Colgate” app, which connects to its line of smart toothbrushes. As part of the collaboration, Headspace hosted “Mindful Moments” programming to help support healthier daily habits and urge toothbrush owners “to smile more often.” Meanwhile, they recently launched a Co. by Colgate, a new Gen Z oral care brand sold exclusively through their site and Ulta Beauty. It features seven items including a sweet mint-flavored  “Oh So Dazzling” toothpaste in a “shiny silver tube,” an electric and manual toothbrush in a pink ombré travel case, on-the-go teeth whitening pens and kit, and “Later, Stains!,” an anti-stain foaming mouth wash. Recently, oral care brands have been crafting “a new marketing persona” and referring to a new category as “oral beauty” to make tooth brushing more like self-care—and Colgate took advantage of that to stay relevant with young consumers. 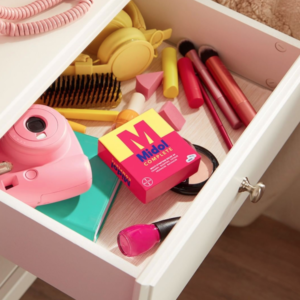 Midol
Invented in 1911, Midol was initially used as a way to relieve headaches or toothaches, but overtime, became more well-known as a way to relieve menstrual cramps. Distributed by the 157-year-old Bayer, they’ve only minimally changed their packaging through the years—but went with a complete overhaul last year. As a way to reach “a new generation of women,” the brand gave themselves a social media makeover as well as a complete revamp of their overall design shifting into more bold colors, logo, messaging, and imagery. When they debuted their new look, they leaned on their social channels with Instagram-friendly GIFs and images, a Snapchat filter, as well as paid posts on sites like Refinery29, which has a heavy Gen Z and Millennial readership. According to the company’s VP, they timed the relaunch to happen last year since women “aren’t going to stop having periods and symptoms through a pandemic.”