4 Brands Bringing Trending TikTok Content onto Their Own Platforms

Instead of competing, these four brands have found ways to integrate trending TikTok content into their own platforms…

You already know that TikTok has grown massively in the last year, especially among Gen Z. YPulse’s recent social media monitor behavioral data found that 45% of 13-39-year-olds currently use TikTok, with 64% of 13-20-year-olds saying they use it compared to 38% of 21-39-year-olds. Of course, there’s no denying that the platform has had a massive influence when it comes to music and general product discovery. YPulse’s music research shows that the app is one of the top platforms that Gen Z is discovering new songs and musicians on, and our Social Media Deep Dive report found that 28% of young TikTok users say if they are looking for products or services to purchase, TikTok is a great place for inspiration, and 28% say TikTok often features products and services they are interested in buying. The influence the app has over young consumers’ purchases and media behavior has not gone unnoticed by brands, with stories of products going viral on the app and tracks hitting the Billboard charts because of TikTok videos now common.

Of course, trying to replicate the viral power of the app has become a major trend: TikTok copycats began to emerge in the wake of its skyrocketing popularity, while existing popular social and entertainment platforms like Instagram and even Netflix developed features to compete with the app. But some brands are taking a different path, and instead of competing with the short-form video app, they’re integrating TikTok content into their own marketing strategies, platforms, and sites as a way to not only reach young users, but to increase sales or viewership. For example, YPulse told you how the TikTok subculture #BookTok is boosting sales for new and old titles, and Barnes & Noble has been setting up “BookTok” tables filled with popular titles that have gone viral on the app, and are crediting young readers for a recent sales boom. After all, if you can’t beat them, join them—and that’s just what these brands did, finding creative ways to showcase trending TikTok content on their own platforms: 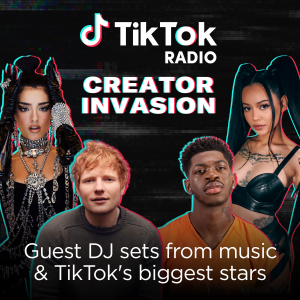 SiriusXM’s TikTok Radio
YPulse’s music report found that social media is the top place 13-39-year-olds are listening to music i, and it’s no secret that TikTok has made a massive impact on the music industry. To reach next gen music fans, SiriusXM launched a “TikTok Radio” music channel last month. Designed to sound like a “radio version of the platform’s ‘For You’ feed,” the broadcast company is making a play for younger audiences with a new TikTok Radio music channel hosted by TikTok stars. DJ Habibeats and DJ CONST go live on TikTok each week while DJing the music channel, and creator hosts including Billy (@8illy), Cat Haley (@itscathaley), HINDZ (@hindzsight), Lamar Dawson (@dirrtykingofpop), and Taylor Cassidy (@taylorcassidyj) are the voices of “The TikTok Radio Trending Ten”—a weekly roundup of songs trending on TikTok. Ed Sheeran, Lil Nas X, and Normani will also appear as stars on TikTok Radio to help promote the new channel. Earlier this summer, the company also tapped “TikTok Tastemakers,” like Bella Poarch, to show off their TikTok Hits Playlist, which generated millions of views on her profile. SiriusXM isn’t the only music platform integrating TikTok into their brands: Spotify and Apple Music have also created their own TikTok playlists, while iHeartRadio collaborated with the app for a digital radio station exclusively in Australia. 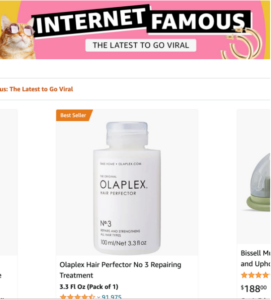 Amazon’s “Internet Famous: The Latest To Go Viral” Collection
Music isn’t the only industry that’s taking advantage of TikTok’s massive growth: We recently told you that Amazon is Gen Z and Millennials’ favorite place to shop for clothing—and the ecommerce giant has been finding ways to reach young shoppers in recent years. Amazon is no stranger to launching new collections made popular by TikTok: First, there was #FoundItOnAmazon, which has a whopping 1.9 billion views on TikTok, and inspired the company to make an apparel section featuring various styles dedicated solely to the clothing and accessories that was trending on the app. Earlier this summer, Amazon leaned even more into TikTok virality by launching the “Internet Famous: The Latest To Go Viral,” a new product collection that features a mix of portable carpet cleaners, foot peel masks, skincare products from CeraVe (a known TikTok favorite among the #SkinTok community), and dozens of other items that have garnered millions of views across the app. While Amazon doesn’t “specifically use the word TikTok on its site,” the collection pulls from the app’s aesthetic and in its list of stuff, and it features more than 200 products so far. By curating a collection of viral TikTok products, Amazon “is acknowledging the importance that TikTok has amassed in driving retail sales, especially for products that stray toward the unconventional.” According to one active product recommender on TikTok: “I think that brands are starting to realize that TikTok has quite a bit of influence as a path to purchase,” and added that Amazon finally acknowledging TikTok “might further fuel that shift.” 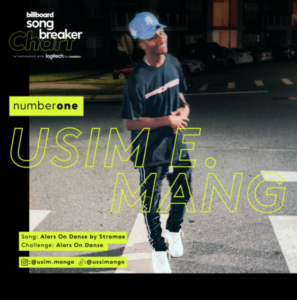 Logitech x Billboard’s Song Breaker Chart
In recent months, Logitech has been creating initiatives to help and reach Gen Z, including helping young Black and BIPOC dancers copyright their dances on the platform. Now, the company is teaming up with Billboard to launch the new Song Breaker Chart, which is “the first-ever creator-centered music chart.” The monthly chart will rank digital creators who are driving music consumption through their content creation, and will recognize their roles in helping songs debut and rise up Billboard charts through original and/or widely circulated memes, dance challenges, and more. The chart was initially inspired by Logitech’s Song Breaker Awards, which streamed on TikTok prior to the Grammy Awards last March and garnered more than half a million unique viewers. The inaugural awards honored creators for curating music playlists and pop culture moments, including artist breaker award winner 24kGoldn for his Hot 100-topping hit “Mood,” featuring iann dior; song breaker award recipient Surf Mesa for the Emilee-assisted hit “ily (i love you baby)”; and originator award recipients “Renegade” dance creator Jalaiah Harmon, “Savage” dance creator Keara Wilson, and “Say So” dance creator Haley Sharpe. Following the award ceremony’s success, the two companies worked together to develop the Song Breaker chart “to further highlight the creators’ impact on the music industry.” Lizzo and Jason Derulo were among the 20 creators on TikTok who were honored on August’s chart, for “Into the Thick of It” by The Backyardigans and “Jalebi Baby” by Tesher. Derulo’s official remix of “Jalebi Baby” “catapulted” the song higher on the Billboard Global Excl U.S. chart and Billboard Global 200 charts in late July, with a No. 50 peak on Global Excl. U.S. and No. 80 peak on Global 200. Meanwhile, Usim E. Mang topped this month’s Song Breaker Chart for the song “Alors on the Danse” by Stromae. We previously told you about the companies making songs go viral, and this new chart is just a way to recognize the creators who are helping further drive that virality on the app. 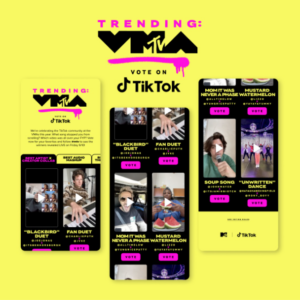 MTV’s “Trending: VMAs” Awards
While Logitech and Billboard recognized artists and creators on the app, MTV decided to recognize them with trophies. For years, the VMAs have been a way for young music fans to vote on their favorite musicians’ music videos—and Gen Z and Millennial favorites like Lil Nas X, Justin Bieber, and BTS were among the top winners. But this year, the cable network also decided to tap into the TikTok music mania: Ahead of the VMAs telecast earlier this month, MTV collaborated with TikTok to debut a new awards show to recognize artists and creators who are driving music trends and culture on the app. Just like the actual VMAS, this award ceremony was also voted on by fans and users on the platform. TikTok star and social media personality Quen Blackwell hosted the Trending: VMAs awards celebration, which was livestreamed on the MTV TikTok account to their seven million followers. The event featured performances, winning moments, and special guest presenters, including Bretman Rock, Boys World, Makayla Culpepper, Denzel Dion, and Justina Valentine. The categories and their winners were Best Breakthrough Song which was awarded to “Backyard Boy” by Claire Rosinkranz; Best Comeback Song which was awarded to “Potential Breakup Song” by Aly & AJ; Best Artist x Creator Collab which went to Mustward Watermelon by Lizzo x @yayayayummy; Best Audio Mashup which went to “Shaxicula” (“Toxic” x “Love Shack” x “Dragula”) by Britney Spears / The B-52’s / Rob Zombie x @djcummerbund; and Best Viral Dance, which was awarded to “Twerkulator” by City Girls x @layzchipz. We’ve told you how young consumers have become less interested in watching award show broadcasts in recent years, but dedicating a ceremony to the artists and songs they’re interested in—and livestreaming it on social media is a way that could reignite their interest in them.

North America
Cultural Appropriation Keeps Trending–Here’s What Brands Should Know
Cultural appropriation is an important issue to Gen Z and Millennials, and there ar...
North America
4 TikTok Influencers You Haven’t Heard of Yet, That Millions of Gen Z and Millennials Have
“I never expected this to blow up” is the new “thanks for one million subscribers” ...
Western Europe
NA vs WE: Who Are Online Celebs Influencing The Most?
How does young Europeans’ and North Americans’ affinity for online celebs compare? ...