Ratings for award shows across industries have been struggling for years—so why aren’t young consumers watching? We asked…

It’s awards show season, with every weekend seeming to bring a parade of stars on another red carpet and the Oscars coming this Sunday—but are young consumers watching? In recent years, award shows across multiple industries have undergone major bumps in the road—and struggles with viewership. This year, The Grammys’ Gen Z and Millennial viewership and ratings plunged to an all-time-low, as did the Golden Globes’. While The Oscars saw a slight uptick in viewership last year, ratings had been regularly sliding for years before, and it was still the second least watched Oscars ever, according to Forbes. The Oscars have of course been under increasing scrutiny for years for a lack of diversity in nominees and other issues, with public criticism made very public with the long running (and many, many say still relevant) #OscarsSoWhite campaign.  That’s not the only Oscars hashtag on Twitter: #NotWatchingTheOscars is also used to criticize nominations, and other aspects of the broadcast.

But there are other factors at play as well.  Young viewers’ media consumption habits are shifting to streaming and away from traditional TV, and award shows have been slow to adjust their strategy as social snippets start to get more attention than the main attraction. According to Vulture, adults under 50 are ABC Oscars’ advertisers’ most desirable demographic. So what do young consumers really think of award shows today? We just asked them, and we’re breaking it down in four stats: 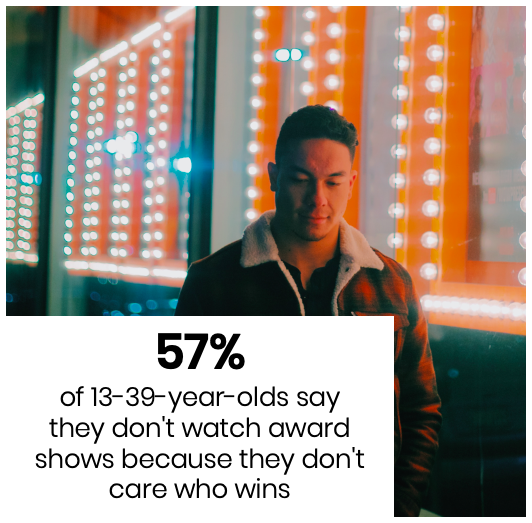 Over half say they don’t watch award shows because they don’t care who wins.

YPulse’s recent data shows that 57% of young consumers agreed that they don’t watch award shows because they don’t care who wins. In fact, according to our TV and entertainment survey, only 15% of 13-37-year-olds say they regularly watch award show—and while there are plenty of reasons that young consumers might not be tuning into award shows, this could be a key factor. Back in 2015, we wrote the article “No One Cares Who Won: How Meme-able Moments Have Taken Over Event TV,” explaining, “It’s somewhat of an exaggeration to say that no one cares who wins, of course some do, but that is clearly not why young viewers are tuning in. The real action isn’t happening on the red carpet, it’s happening on Twitter and Tumblr, where young consumers are choosing their own winners for the night based on who is silliest, who gives them the best content to play with, delivers the sassiest line or the best fail of the evening.” Clearly, this has only become more true and brings us to… 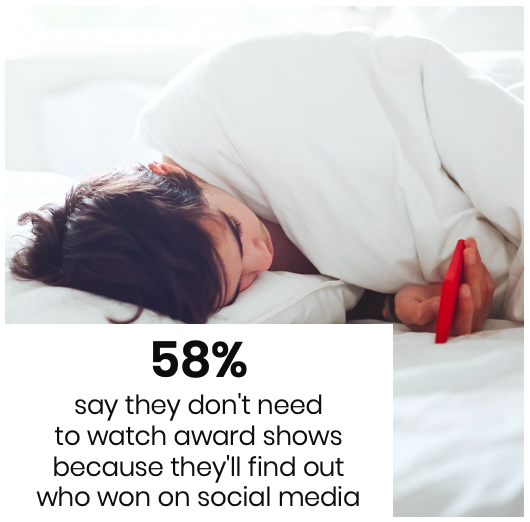 Most say they can just find out what happened on social media.

In the early years of televised ceremonies, award shows were one of the only ways that the general public could get a good glimpse of their favorite actors and actresses outside of the movie theatre. Now that we have instant access to our favorite celebrities through social media, and they’re actively posting before, during, and after the shows—contributing to the already huge online media chatter that runs parallel to the live event.  It’s no wonder that 58% of young consumers say they don’t need to watch award shows because they’ll find out who won on social media. Similarly, 50% of young consumers say “I don’t need to watch award shows because I can see my favorite celebrities on social media.” As one Reddit user put it, people don’t care about award shows for a lot of factors; “they’re boring, feel dated, viewers don’t agree with the nominees, it’s an off-putting showing of shameless capitalism, you can see the highlights on YT [YouTube] the next day or catch who wins on Twitter.” 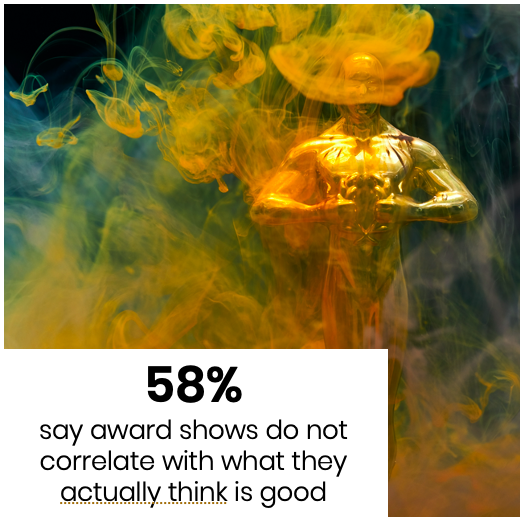 Almost three in five say award shows do not correlate with what they actually think is good.

It’s not that young consumers aren’t watching movies. In fact, young Millennials are currently the biggest moviegoing demo. According to PostTrak, a quarter of all ticket buyers in the past seven years have been 18-24-year-olds, and nearly half of all moviegoers are under the age of 25. The data goes to show that streaming hasn’t killed the box office, as many feared. But while they might be watching movies, the ones they like aren’t necessarily the ones getting awards: 58% of 13-39-year-olds say that award shows don’t correlate with what they actually think is good. Over half of young consumers watch a TV show or movie when they’re feeling unhappy, most prefer comedic content and the Oscars have historically chosen to nominate dramas, there’s a clear dissonance. While there is always debate online around who deserves a nomination and was snubbed, today’s young consumers don’t have any qualms about just skipping the broadcast if they don’t care about the films being showcased. 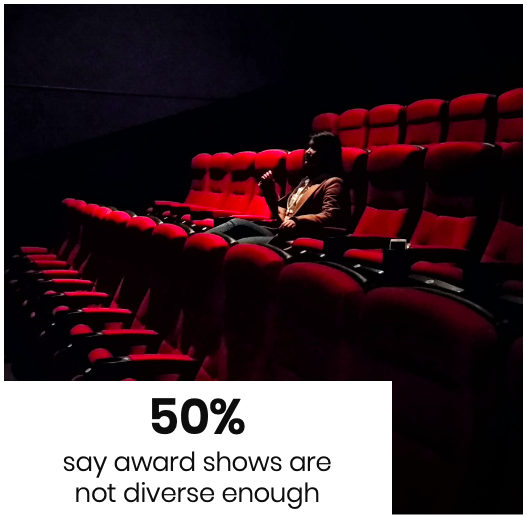 Half say award shows are not diverse enough.

As we mentioned above, award shows have been under increasing scrutiny for their lack of diversity, and young consumers have taken note, with half saying they are not diverse enough. For this year’s Oscar’s women were snubbed in the Best Director line-up at the Oscars, and the Academy itself is 68% male and 84% white. As April Reign, the creator of #OscarsSoWhite wrote in Variety this year, “#OscarsSoWhite has always encompassed all traditionally underrepresented communities, not just race and ethnicity: It’s also gender identity, sexual orientation, disability, First Nations status and age.” It’s clear that the sentiment has resonated with young consumers. After all, Gen Z is the Diversity Tipping Point generation, and young viewers are craving representation. YPulse’s TV and entertainment survey revealed that 77% of 13-37-year-olds believe that more TV shows/movies should star non-white actors/actresses.