Yes, Gen Z Is Much More Likely Than Millennials to be on TikTok 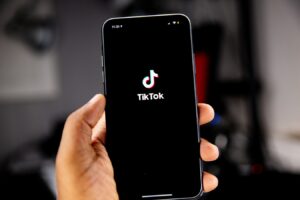 Is TikTok really a Gen Z platform? The data says yes, and we’re breaking it down…

YPulse has reported that TikTok’s growth in 2020 was astronomical—and the platform’s star hasn’t fallen yet this year. According to DataTrek Research, TikTok saw the biggest surge on Google search in the span of 90 days at the end of last April, surpassing other popular social networks like Facebook, Snapchat, and Twitter. Because of the spike, it was dubbed “the breakout social media platform of the COVID crisis.” Despite the app coming close to being banned in the U.S. last year, and facing a slew of copy-cat features, they still managed to become a favorite among young consumers.

But TikTok has especially become known as the social platform for Gen Z, and a go-to for brands trying to reach the next generation. Just how much has the app remained the domain of the youngest gen? We’re breaking it down with the data from our most recent social media monitor report.

Despite TikTok adoption among Millennials growing, current use among 20-39-year-olds doesn’t come close to use among 13-19-year-olds: 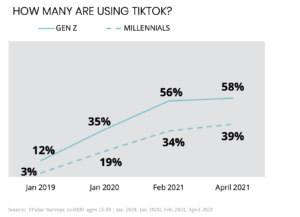 Over half of Gen Z consumers are now on TikTok, compared to 39% of Millennials. Growth among the younger generation has been faster as well, increasing 46 points between January 2019 and April 2021, compared to 36 points for Millennials in the same time span. However, growth among Gen Z appears to be slowing down, or plateauing slightly between February and April of this year. If Millennial growth continues, they could catch up to Gen Z this year. But right now, the app remains a distinctly Gen Z domain.

When we looked at the daily usage between Gen Z and Millennials, we also saw the differences between the two generations with 46% of 13-19-year-olds saying they use it daily compared to 27% of 20-38-year-olds. And when we look at use by age group, it’s clear just how much more likely younger consumers are to be on the app: 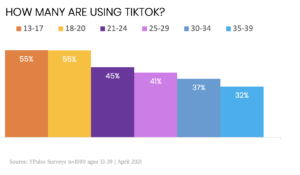 Looking at the usage data by age group from our recent social media monitor, the differences between Gen Z and Millennials become even more clear. Those 20-years-old and younger are most likely to be on the app, with over half of both 13-17-year-olds and 18-20-year-olds saying they use it. From there, usage decreases with each age group, and is lowest among 35-39-year-olds. (Though the fact that a third of them are also using the app is still significant.)

But another look at the data reveals that a specific group of Gen Z is driving the popularity of the app: 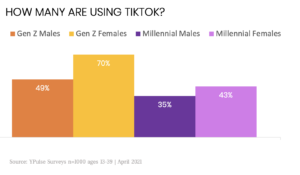 Gen Z females are the most likely to be using the app, with 70% of 13-19-year-old females using TikTok compared to 49% of  13-19-year-old males. While Millennial females are also more likely than Millennial males to be on the app, Gen Z female usage blows everyone else out of the water.  In recent years, the platform certainly has earned a track record as a place where teen girls are “achieving viral fame,” From VSCO and e-girls to influencers like Charli D’Amelio, Addison Rae, Bella Poarch, and Mooptopia. According to one media researcher, “girl culture” is prevalent on platforms like TikTok, where many girls go from having no followers to hundreds of thousands in a matter of days, in part “because TikTok turns the kind of things they’ve been doing for decades—dancing in their bedroom, joking around with their friends, fighting with their parents—into a global spectacle.”

So yes, TikTok is a Gen Z platform—and especially one for Gen Z females, with the majority of them using the app. Millennial use might catch up (after all, older consumers have a tendency to invade the apps that younger users make popular) but it’s safe to say that for brands looking to reach Gen Z TikTok is still the realm of the younger gen.

North America
3 #Cores Proving Gen Z and Millennials Are In Charge of Style
Social media is creating fashion trends, making all style feel like a #core or #aes...
North America
Taylor Swift is The Newest Celebrity Private Jet Controversy on The Viral List
TL;DR Taylor Swift has been called out for having the highest emissions of...