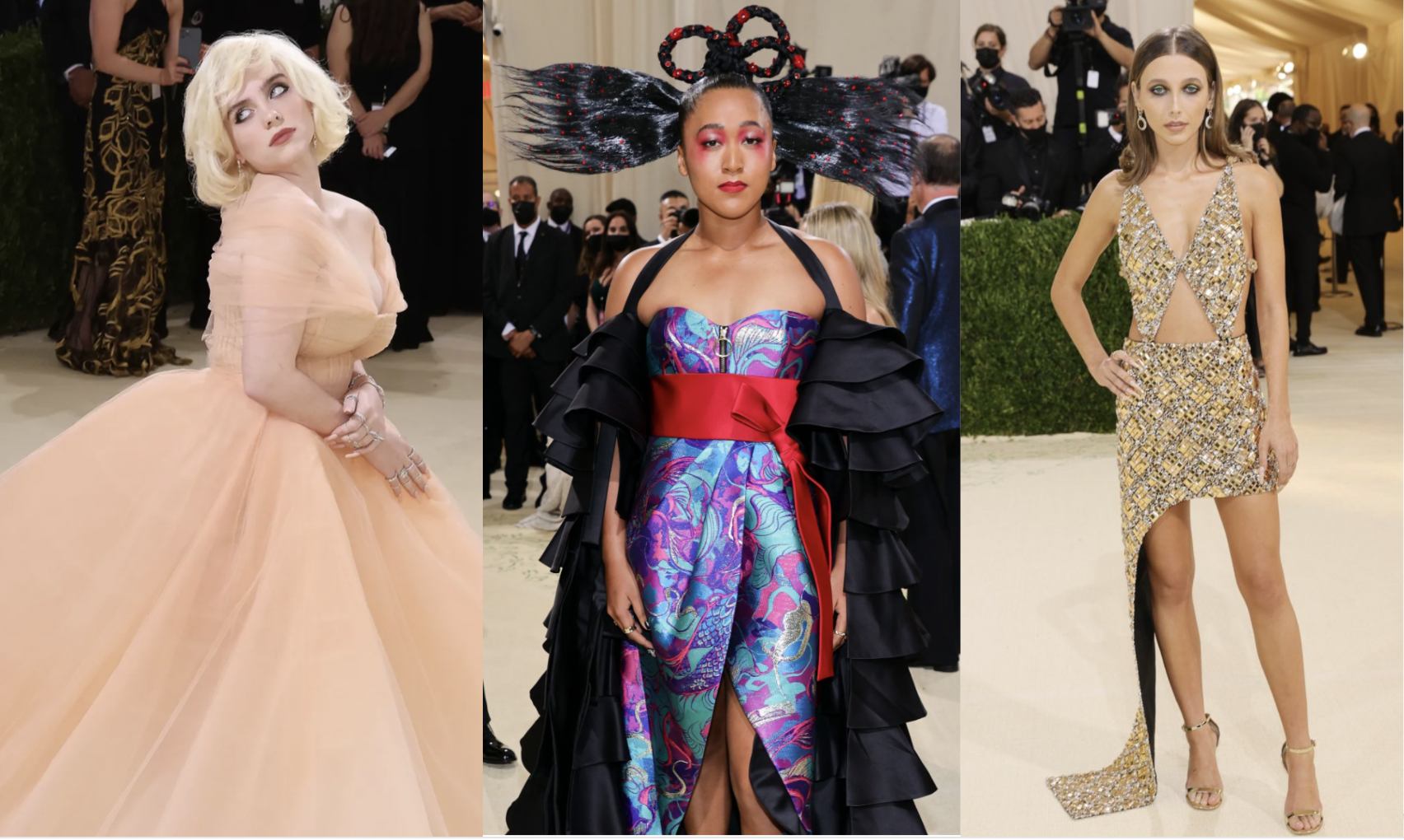 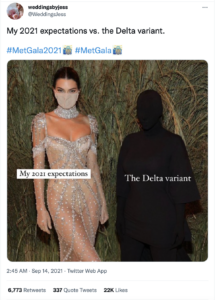 The Met Gala returned Monday night, with several young icons like Emma Chamberlain, Dixie D’Amelio, Olivia Rodrigo, Nikkie de Jager, and Addison Rae Easterling (not to mention the night’s hosts, Timothée Chalamet, Naomi Osaka, Billie Eilish, and Amanda Gorman) paving the way for a new era of Anna Wintour’s Met Gala. After being canceled in 2020 and postponed from May to September this year, many were quick to question why social media stars were invited to the event: @kamthebeautiful says in a Twitter post, “You know celebrity culture is goin down the tubes when they invite YouTubers to the Met Gala,” and a report from Page Six dubbed the event as “not cool anymore.” And despite some backlash, the 2021 Met Gala proved to be a transformative event (for the better) by inviting a more diverse group of stars and evolving the public’s definition of A-list celebrity culture. TikTok (of course) played a big part in this year’s Met Gala with young TikTokers using the platform as their own fashion discourse leading up to—and during—the event. NYU students Stella Wunder (@lungtimes) and Carol Tchiakpe (@shawtylonglegs) started sharing their Met Gala predictions to their 53.1K+ TikTok followers when the theme and date for this year’s event were first announced, and even hosted a watch party for the night for their followers to join virtually and IRL. And while the Met Gala typically boasts a “hush-hush, rule-bound structure” where only the most elite A-list stars are invited, Stella Wunder notes, “TikTok is going to change the world of media by granting access and reach to [talent] that wouldn’t normally have gotten it.” Internet commentators like Diet Prada on Instagram provided some (much appreciated) fashion discourse on how well the Met Gala stars “understood the assignment” when dressing with the theme of the Met Costume Institute Exhibit, “In America: A Lexicon of Fashion.” As noted by Costume Institute curator Andrew Bolton, the exhibit “presents a revised vocabulary of American fashion based on its expressive [rather than formal] qualities,” including concepts like “nostalgia,” “preciousness,” “optimism,” and “exuberance,” and many of the artists and designers featured are BIPOC individuals, immigrants, and queer individuals—a white dress by Nepalese American designer Prabal Gurung opened the exhibit with a red, white, and blue sash declaring, “Who Gets To Be An American?” Billie Eilish’s reimagined Marilyn Monroe look by Oscar De La Renta, Cara Delevingne’s white powersuit from Dior’s Maria Grazia Chiuri, and Representative Alexandria Ocasio-Cortez’s white gown by Brother Vellies founder and designer Aurora James splashed with “tax the rich” in red were some of the most-talked about and most-loved looks from the event. But what the internet is really talking about is Kim Kardashian’s Balenciaga gown with a matching mask/train and Kendall Jenner’s totally opposite star-studded gown—memes of the sisters’ looks are flooding social media. “America’s most fashionable dog” was also in attendance, and people can’t stop talking about the gorgeous pup that was spotted in the background of Megan Fox’s red carpet appearance. From the memes, to TikTok’s fashion discourse, to Gen Z social media stars, the 2021 Met Gala is one for the history books for forever changing how society defines celebrity culture while calling on young social stars to paint a new, more diverse and inclusive era of iconic fashion events. 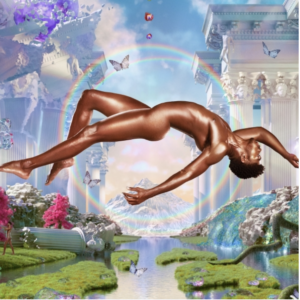 After winning video of the year at the 2021 MTV VMAs for his “Montero (Call Me by Your Name)” music video and dropping several teasers with his Met Gala fashion (not to mention the pregnancy photos teasing the album’s arrival), Lil Nas X’s “Montero” Album is officially here. And as if the pregnancy photos didn’t tease fans enough, the lead up to Lil Nas X’s album drop graced fans with a series of billboards in L.A. mimicking cheesy lawyer billboards with phrases like “Gay? You May Be Entitled to Financial Compensation,” sourcing donations to LGBTQ and human rights nonprofits via “Montero”’s baby registry, a “The Montero Show” daytime talk show that aired on YouTube one hour before the album release, and a magical music video for “THAT’S WHAT I WANT” (the video has amassed nearly 3M views in 10 hours). In classic Lil Nas X fashion “Montero,” is a “kaleidoscopic utopia” celebrating same-sex love while challenging expectations, and Megan Thee Stallion, Miley Cyrus, Doja Cat, and even Elton John are featured in the album. Lil Nas X’s presence as a cultural icon for Gen Z and Millennials continues to blow fans (and non-fans) away with his music, genderfluid fashion, and over-the-top marketing, and the “Montero” release is the cherry on top of a highly anticipated season awaiting the album. 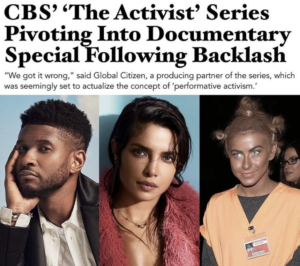 Upcoming Reality Competition Series, The Activist, Is Being Flamed By Critics and Social Media

CBS announced earlier this summer that it’s exploring a new kind of competition series with Live Nation and Global Citizen (an international education and advocacy organization) where social activism meets reality TV in a new show dubbed The Activist. The show follows six activists who team up with public figures and partake in challenges, digital campaigns, community events, and media stunts to prove that they’re the best-equipped to promote social causes like education, environment, and health. The activists’ “proven” success, however, depends on their level of social media engagement like how many mentions, retweets, comments, etc. they receive on top of the assessments from the show’s hosts. Usher, Priyanka Chopra Jonas, and Julianne Hough were recently announced as hosts on The Activist, immediately sparking backlash from journalists and industry experts for merging reality TV capitalism with serious global issues. Andy Wilson (who manages online campaigns for environmental nonprofit BleedingCool.com) is dubbing it as “the worst idea for a TV show ever.” Several journalists and media experts are also criticizing The Activist: Forbes writer Janice Gassam describes the idea as “performance activism”; Hong Kong journalist Yuen Chen notes, “As activists are jailed, maimed, and killed around the world this is grotesque”; and The Washington Post’s Michele L. Norris says, “A show that tries to exploit a wave of genuine social activism to create a culture of hazy (or lazy) online engagements is an unhelpful distraction from the real work going on and the real challenges we face.” The fact that the show’s hosts aren’t exactly known for their activism is also being called out, and Essence writer Hannah Phifer notes, “What exactly is Usher going to bring to a conversation about activism? Are the winners going to receive a cash prize of Ushbucks? And don’t get me started on Julianne “Blackface” Hough and Priyanka “Telling Activists to not ‘Yell’ About War” Chopra Jonas!” CBS, Global Citizen, and Live Nation have responded to the backlash in a joint statement explaining that The Activist is now being turned into a primetime documentary special and will remove the competition element from the show. Chopra Jones apologized on Instagram for her involvement with the show, while Global Citizen released its own statement apologizing for the show’s attempt to turn real-life activism into a competition. 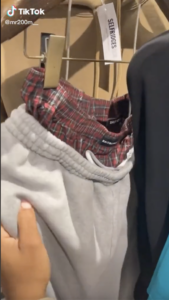 A prominent fashion designer behind a pair of $1,190 grey Balenciaga sweatpants is facing backlash from social media users—and some fashion and Black history experts—for the brand’s Trompe L’Oeil pants that mimic the look of boxers peeking out from the waistband. TikToker @mr200m posted a video of the sweatpants while shopping in-store, saying “This feels racist”—the clip has garnered 1.6M views. Boxers are woven inside the pant to give the effect of sagging pants as the sweatpants are lowered past the waist. Experts including Marquita Gammage (associate professor of Africana Studies at California State University) are calling out the pants, explaining how the design is “an exploitation of Black culture with the hopes of securing major profits,” while further explaining that the style has “been used to criminalize Blacks, especially Black males as thugs and a threat to American society.” Balenciaga’s CMO responded to the incident in an email to CNN noting, “in many of our collections, we combine different wardrobe pieces into a single garment, such as denim jeans layered over tracksuit pants, cargo shorts merged with jeans and button-up shirts layered over t-shirts…these Trompe L’Oeil trousers were an extension of that vision.” While the style became a symbol of hip-hop culture in the ‘90s and early ‘00s, several cities have passed laws banning sagging pants while disproportionately enforcing the law against young, Black men. Susan Scafidi, author of Who Owns Culture: Appropriation and Authenticity in American Law, explains to USA Today the problematic nature behind Balenciaga’s sweatpants design: “There is a history there. We have a style that when it is worn by the people that originated it becomes criminalized and punishable…we now have a style that is being celebrated that was very recently forbidden.” Stealing or appropriating designs from cultures for profit is a common problem brands continue to face—Forever 21 was recently called out for stealing a Koreatown merch design from Michael Pak. Racism and appropriation weigh on BIPOC young consumers—YPulse’s Representation in Action trend research shows that 81% of BIPOC young people agree that racism is getting worse in America. Young consumers notice when brands are not following through on diversity and inclusion efforts, and brands must weave representation into their identity and acknowledge their mistakes when they happen if they want to reach young consumers. 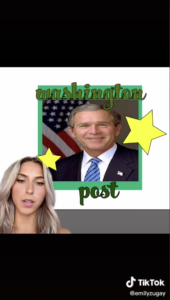 Adobe, The Washington Post, and several more brands are reacting to TikToker @emilyzugay who is going viral for (horribly) redesigning brand logos on purpose—her videos have amassed 7M views.

In more Lil Nas X news, the artist’s spin on the Prom Dress took the VMAs by storm.

Taylor Swift stunned fans with a re-recording of “Wildest Dreams”—Swift posted the announcement in a TikTok post, garnering more than 4M views in three hours.

Teenage tennis champion Emma Raducanu took to the U.S. Open’s Weibo account to share her excitement with a special message in Mandarin—racking up more than 1 million views for the clip.

K-pop band Blackpink surpassed Justin Bieber as the most subscribed artist on YouTube.

“Devious Lick” is a TikTok trend going viral where students attempt to steal school property—TikTok has banned videos, searches, and hashtags referring to the trend following several schools reporting it.

Social media users are inspired by Simone Biles and other young gymnasts’ testimonies during Larry Nassar’s trial—and a photo of Biles and Aly Raisman holding hands has been widely shared on social.

JoJo Siwa is voicing concerns on Twitter about her upcoming tour (Nickelodeon’s JoJo Siwa D.R.E.A.M. The Tour), saying that Nickelodeon treats her “only as a brand.”