OnlyFans’ content creators are sharing their frustrations about the platform’s NSFW content ban, Yik Yak is back after a four-year hiatus, Forever 21 donated $100K to Koreatown merch designer Michael Pak after reportedly copying his designs, Paralympic athletes and people who live with disabilities are sharing their experiences via #DisabilityAwareness on TikTok—plus more youth-focused news taking over social media this week! 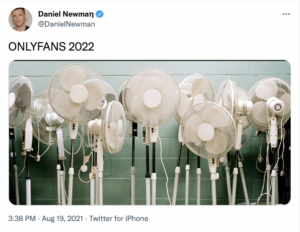 The NSFW platform is having a big media week after announcing its new efforts to shed its risqué roots as lifestyle influencers and brands continue embracing OnlyFans. Part of its plans include launching its first-ever ad-free app, OFTV, which will serve as a hub for lifestyle creators to share their content and interact with fans. But the announcement fueling frustration from content creators is OnlyFans’ surprise call to ban sexually explicit content starting this October. The platform stated the NSFW content ban is “to comply with the requests of our banking partners and payout providers,” a move that is tied to its effort in seeking a $1 billion valuation this year—something it has been struggling to achieve since investors don’t want to be associated with its adult content. Twitter users are sharing their disappointment, with many claiming the platform is leaving behind the very creators who helped it gain mass attention. One post from @iLoveNancyMiami reads, “Sex Workers, NSFW Content Creators & Camgirls really need to embrace the concept of Decentralization. Platforms like OnlyFans, Tumblr & many others monetized our work, only to then throw us off the very platforms we helped build.” Many are comparing OnlyFans’ decision to when Tumblr announced that sexually explicit content would no longer be allowed on the platform back in 2018, which is ultimately what led to the creation of OnlyFans as one of the only sites that gives sex workers a safe space to post content and receive a liveable wage. Memes are also flooding Twitter: @MattBaume posted, “I give porn-free OnlyFans one year before they’re bought for $1 by a company that sells ceiling fans,” and another from @DanielNewman who shared an image of oscillating fans with the caption “ONLYFANS 2022.” OnlyFans hasn’t released the platform’s new policy regarding what the ban on sexually explicit content entails. 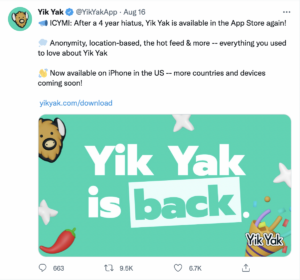 Yik Yak is Back By (Un)Popular Demand

Yik Yak was one of the biggest anonymous messaging apps when the trend of anonymous platforms was taking off back in 2013 and 2014. Founded by fraternity brothers Tyler Droll and Brooks Buffington (yes, that’s a real name), it quickly gained traction with college students due to its vicinity-based function allowing users to communicate “free of labels.” Back then, the app allowed users to see what other people in a 1.5 mile radius were saying, arranging the feed according to popularity. But bullying and threats were a plague on the platform from the start, leading to school evacuations and lockdowns in some cases. A decrease in user engagement and growing criticism regarding the app’s dangerous presence led to its shut down in 2017. But Yik Yak made its return this week after being purchased by Square Inc. in February. The platform claims to have updated its guidelines via its “community guardrails” policy, aiming to address the harmful uses of the original app. A one-strike “no bullying” policy is now in place, meaning users can get banned for engaging in harassment, bigotry, violence, sexual solicitation, and criminal activity on the app. Resources about mindfulness and mental health support are also available on Yik Yak 2.0. The app’s new creators note on Yik Yak’s webpage, “we’re bringing Yik Yak back because we believe the global community deserves a place to be authentic, a place to be equal, and a place to connect with people nearby.” Young people seem to be both thrilled and scared for the app’s return, with many remembering the app being used for cyberbullying and wreaking havoc at school. Of course, people are sharing their reactions on Twitter with one post from @AmandaMAtwell noting: “The worst news you have ever heard alert: Just saw a TikTok that yikyak is potentially relaunching. If you went to college 2012-2015, you know. We really don’t need this right now YikYak.” At its peak in 2014, the app garnered 1.8 million downloads, and as of Tuesday afternoon, YikYak reached No. 3 in the U.S. app store for free downloads, according to Sensor Tower, (compared to ranking No. 66 on Monday when the app became available). 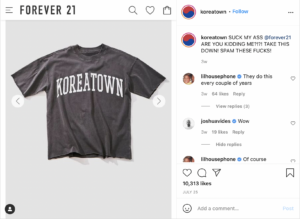 It’s a fast fashion tale as old as time: a massive retailer copies an independent designer or brand, consumers show their outrage and frustration, and life goes on without the retailer taking responsibility—until now. When LA-based designer Michael Pak discovered that Forever 21 had stolen his Koreatown design (something he started creating during the pandemic “to raise money for organizations that support disenfranchised residents”), Pak shared his frustration with @koreatown’s 114K followers in a post reading, “SUCK MY A** @forever21 ARE YOU KIDDING ME?!?! TAKE THIS DOWN! SPAM THESE F****!” And so they did. Instagrammers including Diet Prada (an Instagram fashion watchdog group with 2.8M followers) shared the post on Instagram, calling on Forever 21 to acknowledge ripping off the Koreatown brand which is ”a cult item for the AAPI community.” Shortly after, a representative of Forever 21’s communication team apologized to Pak via email and requested to set up a phone call. Pak headed into the call with two goals: requesting for Forever 21 to remove the Koreatown design from all of its brick-and-mortar and online stores, plus encouraging the brand to donate to five nonprofit organizations in Koreatown—a neighborhood Pak relocated to and aims to support by donating profits from his Koreatown merch to multiple organizations in the area. On the call, Forever 21 was “so apologetic and responsive,” according to Pak, and agreed to donate $20K to the five nonprofit organizations Pak mentioned. Forever 21 acknowledged their wrongdoing in a statement on Instagram saying “we won’t always get things right, but we will do our best to make things right,” saying they will donate $20K each to APAIT, Koreatown Immigrant Workers Alliance (KIWA), Koreatown Youth + Community Center (KYCC), The Islamic Center of Southern California, and Urban Partners Los Angeles. Pak is pleased with the outcome and notes, “I salute [Forever 21] on their part of just really trying to make everything right,” and says he will continue to make monthly Koreatown merch drops with proceeds going to local community organizations to support the area that he moved to and is inspired by. Forever 21’s response is an example of how brands can take action when missteps occur, and why it’s important for brands to support the social causes young people are spearheading if they want to authentically show up for them. 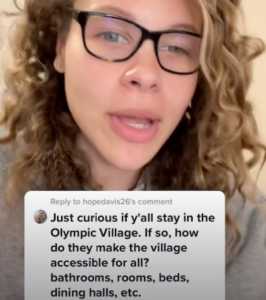 Following the popularity of 2020 Tokyo Olympians on TikTok, next week kicks off the Tokyo Paralympics (August 24-September 5), and athletes are sharing their experiences with their sport and educating users on The Paralympic Games via the organic tag #DisabilityAwareness—amassing 500M views to date. Two-time Paralympian Amanda Dennis (@dennisamanda7) is using her presence on the app to answer questions about her sport (Goalball), explain how The Paralympic Games differ from The Tokyo Games, and of course, share clips about the cardboard beds and Tokyo Olympic Village. Since posting about The Paralympic Games, Dennis’ clips have garnered between 12.9K and 125.9K views—up from the few thousand views her TikToks typically garner. More athletes including Ezra Frech (track and field), Haven Shepherd (swimming), and even Team USA have some of the most-viewed #DisabilityAwareness clips. The tag is also bringing awareness and education to the TikTok community via posts from people who live with disabilities but aren’t athletes, including 20-year-old Caitlyn Cohen who has garnered between 16K and 194.1K views on her posts about her experience living with a stutter. Brands are also showing their support alongside the International Paralympic Committee (IPC) for its decade-long “#Wethe15” campaign aimed at raising awareness for the 15% of the world’s population who live with disabilities—a total of 1.2 billion people. Twitter, Facebook, and Google are transforming their logos and social platforms to become 15% purple during the campaign, and Peloton’s activation “features 15% of all users riding at the same time with an instructor who has disabilities.” A hero film is also tied to the campaign featuring people who live with disabilities, discussing how their experiences don’t make them “‘inspirational’ or pitied—they experience the everyday things in life: breaking their phones, pushing kids in strollers, watching reality TV, and killing houseplants.” Representation of people with disabilities is improving—this week Aerie debuted its latest body positivity campaign #AerieREALVoices featuring wheelchair dance team the Rollettes as models along with TikTok stars and celebrities. Featuring people with disabilities in advertising and marketing is something Gen Z and Millennials want to see more of according to YPulse’s Representation in Action trend research which found that 68% of young consumers see it as a positive when brands include differently-abled models in an advertisement. 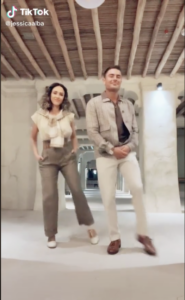 Zac Efron made his first TikTok appearance in a clip of him dancing with Jessica Alba, garnering 13.8M views and 1.9M likes in one day.

Some Gen Z workers are calling on corporate America (via LinkedIn, of course) to adopt their “Pledge to Care” policy, outlining the workplace practices they want their future employers to adopt.

Twitter users are parodying McDonald’s Famous Orders promotion by dreaming up their own hilarious taglines for fake celebrity meal orders.

TikTokers are “horrified” after discovering that The O.C. pool house was fake in a clip that garnered over 550K views from @youreanaccident.

“Munchkin” is a duck in Boston that loves drinking ice water out of Dunkin’ cups and has millions of online fans.

UNC, Chapel Hill commenced its fall 2021 semester with the age-old tradition where everyone takes a sip from the Old Well—and Twitter users are sharing their thoughts.

One of Gen Z’s favorite TV shows, Never Have I Ever is officially getting a third season on Netflix.

Ed Sheeran has announced plans for his next album dropping October 29—and Twitter fans couldn’t be more excited.

Actor Simu Liu (Shang-Chi and the Legend of the Ten Rings star) called out Disney’s CEO after he called the film “an interesting experiment for us”, referring to the film’s 45-day theatrical window that will not debut simultaneously on Disney+.

Pepsi is capitalizing on backlash Coke is facing on social media for its reformulated Coke Zero Sugar, urging consumers to break up with the brand via #MyCokeBreakUp and switch to Pepsi Zero Sugar.

Emma Chamberlain, Addison Rae, and several more young influencers are facing backlash for reportedly being invited to the Met Gala which is historically “reserved” for A-list celebs.

Disney Parks revealed plans for Genie+, a paid app to replace Lightning Lane and help guests plan their trips better—but consumers aren’t so enthusiastic and are sharing their frustrations on Twitter.