What pop culture moments do Gen Z and Millennials think their generations care about? We asked…

Gen Z and Millennials are transforming what “pop culture” means—creating a whole new set of rules for the brands that want to reach them. While reliance on a media calendar of set events has been the norm for brands, Gen Z especially is shifting attention to a less predictable set of moments driven by social media. YPulse’s recent Pop Culture Redefined trend report explores the pop culture moments young generations are paying attention to, social media’s influence on pop culture and what makes young users interested in them, the role of TV and live events and how they can attract young people’s attention, and how young people prefer for brands to play into pop culture. 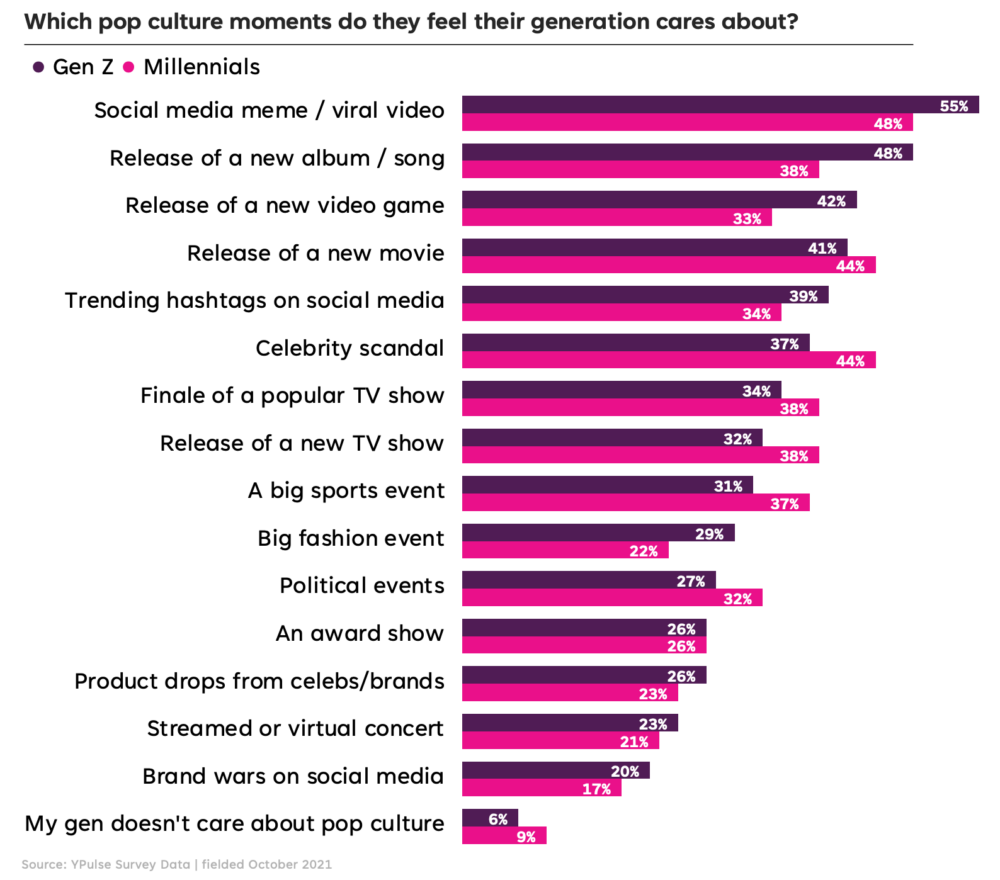 Where do we even begin when it comes to memes and viral videos? These social media events are by far the cultural moments that Gen Z and Millennials say their generations pay attention to, far more than ”traditional” media events like award shows and sports events. And while they are the top pop culture moment for both generations, Gen Z is far more likely than Millennials to say they are pop culture moments they care about.  Millennials. During the pandemic (when screen time increased among young people), memes and viral content served as entertainment, escape, and yes, even sources of solace. YPulse research found that 52% of Gen Z and 37% of Millennials have been using social media as a coping mechanism, likely stemming from increased feelings of loneliness and a craving for connection. In a survey published by the American Psychological Association, respondents reported that viewing funny/cute memes helped lower their stress levels and made them feel more confident about facing the pandemic. One key takeaway from their research is that memes about Coronavirus helped people process stressful news without getting overwhelmed by it—and from the “before and after” memes that expressed their anxiety around the pandemic to Bernie’s mittens, there was certainly an endless supply of them. Of course, viral videos (particularly on TikTok) were easy to come by. From Bella Poarch’s “M to to the B” lip syncing video to Nathan Apodaca longboarding to Fleetwood Mac’s “Dreams” and drinking a bottle of OceanSpray cranberry juice, which was such a big deal that OceanSpray and Mick Fleetwood responded, there was a lot of content for young people to talk about. But 2021 served even more memes and viral videos—everything from the red flag meme to “No Bones” day— and this content is young people’s way of staying up-to-date with what’s happening online and in the world of pop culture. While these moments are far (far, far) less predictable than traditional media events, there are many ways that brands can play into them. This is real-time engagement that often can’t be planned for, but luckily there are other pop culture moments Gen Z especially says that their generation cares about that can be put on a calendar.

Case in point: Gen Z is also more likely than Millennials to say that a release of a new album / song and video game are pop culture moments that matter to their generation. Many of their favorite artists, including Drake, Taylor Swift, Billie Eilish, and newcomers like Olivia Rodrigo, released new songs and albums in the last year that became the talk of social media during their respective release weeks. The younger generation is also more likely to say that releases of new video games are a pop culture moment that their gen cares about, yet another sign of the importance of gaming in reaching Gen Z. Releases of albums, song drops, and video game releases are all moments that marketers can plan around in advance.

Another pop culture moment that a calendar can (usually) be planned around: movie releases. The release of a new movie is a top pop culture moment for both Gen Z and Millennials. One of the most recent examples is of Spider-Man: No Way Home, whose online ticket sales just recently broke the internet. TikTok has been getting in on the hype by helping users kick off the premiere with portal effects and a creator-led rep carpet. Despite the movie theater industry being disrupted by the pandemic, many young audiences have still been finding ways to watch their most anticipated movie releases. HBO Max perhaps dropped the most ambitious move by simultaneously releasing all their 2021 titles in theater and on streaming, which included Dune. Studios got creative with their movie marketing by adding more creative and interactive elements to build buzz. Then, of course, there’s the fact that most of these anticipated movies have tapped young actors popular among Gen Z—including Tom Holland, Timothée Chalamet, and Zendaya—to star in them.

Gen Z and Millennials do care about pop culture moments, but these days these events have to have an element of virality for them to pay any real attention. But by moving fast and planning for the media moments that they do care about (music releases, video games, movies) marketers can still construct calendars around reaching these generations. 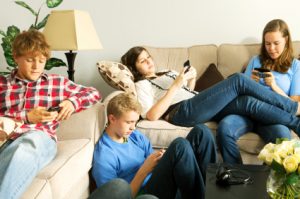