How Young Consumers Feel About the Future of Movie Theaters, in 5 Charts 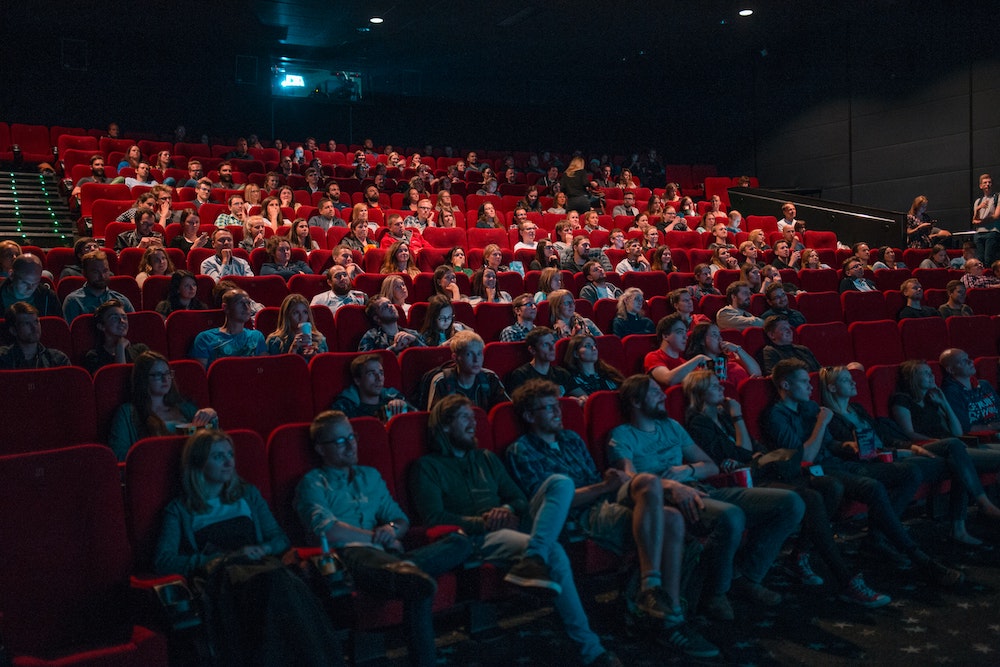 No, young consumers don’t want movie theaters to go away—but they don’t need them. YPulse’s on-demand survey gets to the bottom of how they feel about the future of movie theaters…

Last week, Warner Bros. announced they will release all of their 2021 movies in both theaters and on HBO Max. The reveal that they will put all of their titles for next year on HBO Max the same day they hit theaters, including anticipated movies like The Matrix 4 and Dune, shocked some in the industry. As The Hollywood Reporter put it, this “unprecedented move” is likely to catch theaters off guard and “upset a model that has been in place for decades.” According to a Warner Bros. executive, the “hybrid exhibition model” enables them to best support their films, creative partners, and the moviegoers in 2021 as the pandemic persists.

Though the studio claims that the move is only temporary, there is of course plenty of speculation that the future of movie theaters is at risk. Will consumers grow to expect that movies will be released at home and leave going to the movies behind? We turned to YPulse’s on-demand research platform PULSE to get real-time answers on how young consumers feel about going to the movies, their future movie-viewing plans, and what they think about paying to watch a movie at home. We found that the preference for at-home movie viewing is already strong in Gen Z and Millennials. We asked if a new movie was released both in movie theaters and on a streaming platform at the same time, which they would prefer, and streamers were the clear winner: 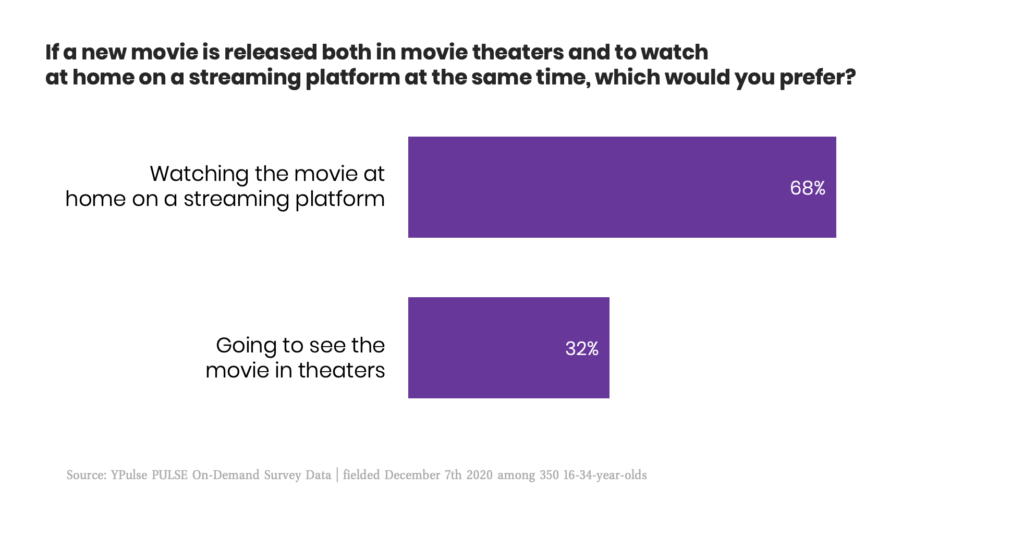 These stats might give you the idea that young consumers just don’t care to see movies in person. But that isn’t the case. When we used PULSE to ask young people if they miss going to the movies in person, the majority said that they do: 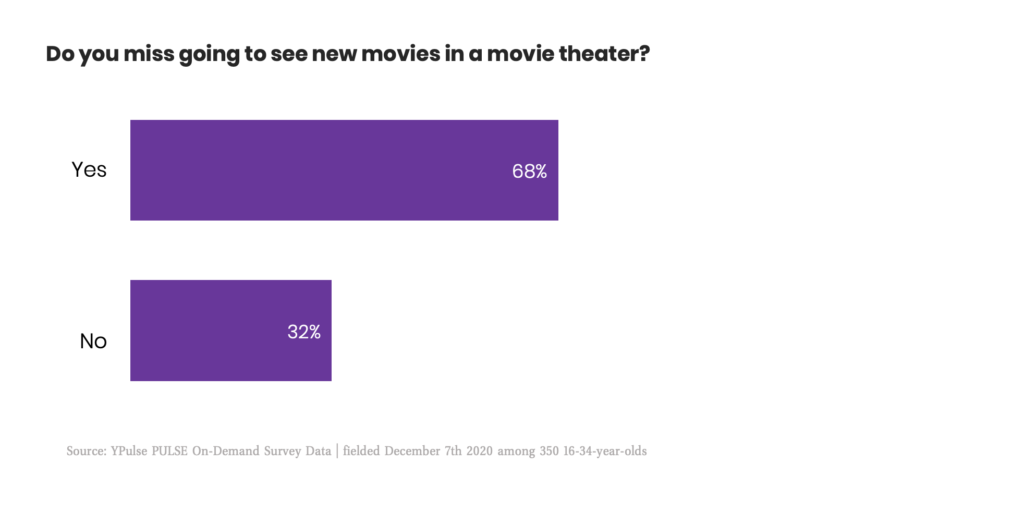 According to our PULSE survey, most young people say that they miss going to see new movies in a movie theater. Gen Z and Millennials have always craved experiences, and clearly, they like going to the movies. Despite their preference to watch new movies at home, they would likely be incredibly upset if going to movie theaters in person was no longer an option. But it’s the “option” that’s important. When we ask them about going to see movies in the future, the reality is that young consumers want the choice to do whatever they feel like in the moment: 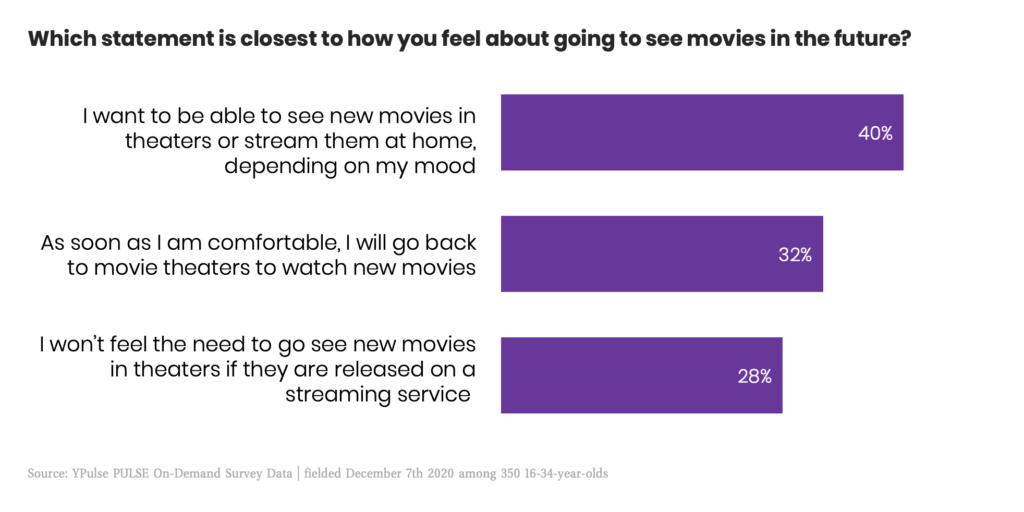 When asked in our PULSE survey to choose how they feel about going to see movies in the future, 16-34-year-olds were most likely to tell us that they want to be able to see new movies in theaters or stream them at home, depending on their mood. That’s compared to a third who say they will go back to movie theaters as soon as they are comfortable. YPulse recent entertainment report also found that only a quarter of young consumers are currently comfortable going to movie theaters, while 16% say they will be comfortable in 1-6 months, and 44% say they won’t be comfortable for 6-12 months or after a vaccine is out.

A little over a quarter of young people say they won’t feel the need to go see new movies in theaters at all if they are released on a streaming service. It’s this last group that the industry likely fears, but the majority of young people want a future with movies theaters in it—so they can go when they feel like it. It’s just that they want the option to do either, and studios who want to capture more viewers could very well cater to these desires even in a post-COVID future.

But let’s go back to Warner’s decision to release their 2021 slate on HBO Max. Now that releasing new movies on streaming services is becoming a norm of the industry (temporary or not) there are many potential platforms that studios could partner with. For streamers, this is a major opportunity to get new subscribers, especially as the space becomes more crowded and audiences more fragmented. But will young consumers jump onto a new streaming platform to see a new movie? Of course, we used PULSE to ask: 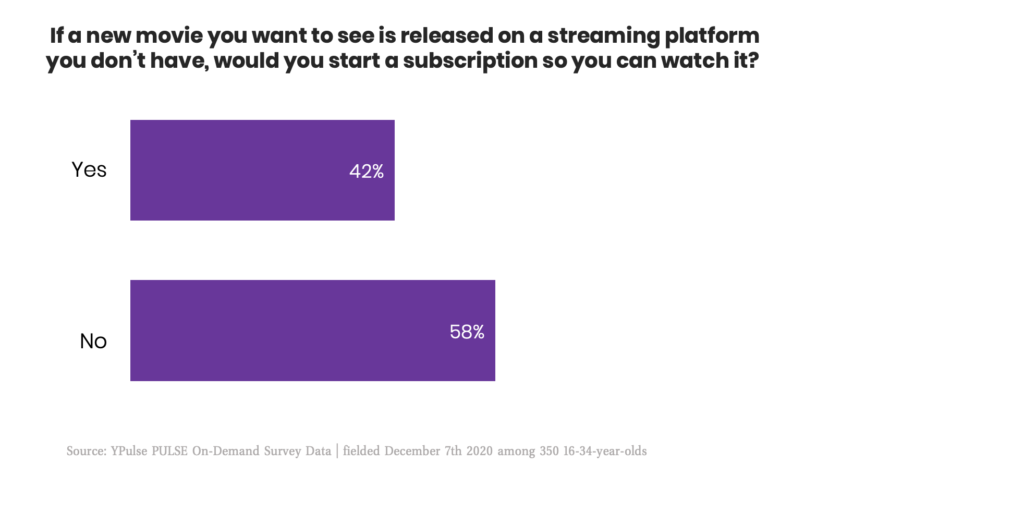 While not the majority, over two in five 16-34-year-olds told us that they will indeed start a subscription to a new streaming platform to access a new movie they want to watch. Streaming platform fatigue doesn’t seem to be in effect quite yet, especially when new platforms have something new and shiny to offer. In fact, YPulse’s entertainment report found that 61% of 13-39-year-olds disagree with the statement “I pay for too many streaming services right now.” 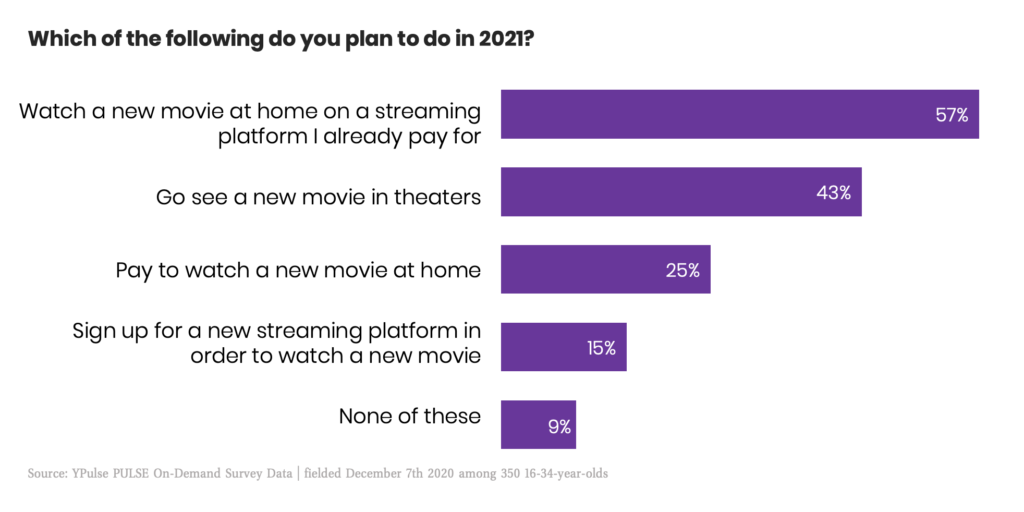 Of course, we won’t ignore the 43% who say they plan to go to see a new movie in theaters next year. Young consumers still want the option to go to the movies. They even plan to go. But they’re happy with streaming too, and that reality might change the industry for good.