3 Ways Movie Marketing Has Been Getting Creative & Immersive 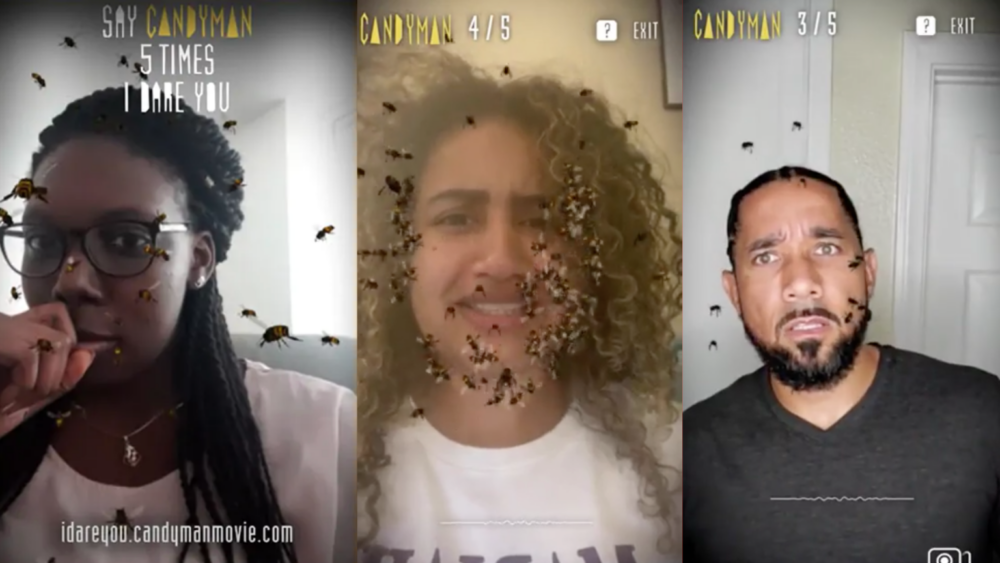 As studios try to lure young viewers into theaters, movie trailers are getting more creative and interactive elements to build buzz…

It’s no secret that when the movie industry took a hit during the pandemic last year, studios quickly pivoted to finding ways to reach young moviegoers at home, which included working with streaming services to simultaneously release their movies. We told you that even as movie theaters began to reopen, home viewing would remain a preference for many young viewers. But we also told you that the majority of young people do miss going to the movies, and as they start to get back to their “normal” pre-COVID experiences, 44% of 13-39-year-olds say they are now comfortable going to see a movie in theaters. And they’re showing up for the movies they’re excited to see, with plenty of summer/early fall theatrical releases helping studios and production companies rally. The recent premieres of Marvel blockbusters like Black Window, Shang-Chi and the Legend of the Ten Rings, and Venom: There Will Be Carnage have racked up millions of dollars and broken box office records, showing that some young movie fans are eager for the full-on theatrical experience.

To get buzz about these new releases going, and convince young audiences they can’t possibly wait to watch them at home, brands have been getting even more creative with pre-release marketing to build hype. Our social and mobile marketing preferences report found that interactive features are one of the types of advertising Gen Z and Millennials are most likely to pay attention to on social media, and movie marketing has been getting more and more interactive to target these generations. Here are three campaigns for newly released and upcoming flicks that show how pre-movie teasers are getting more immersive: 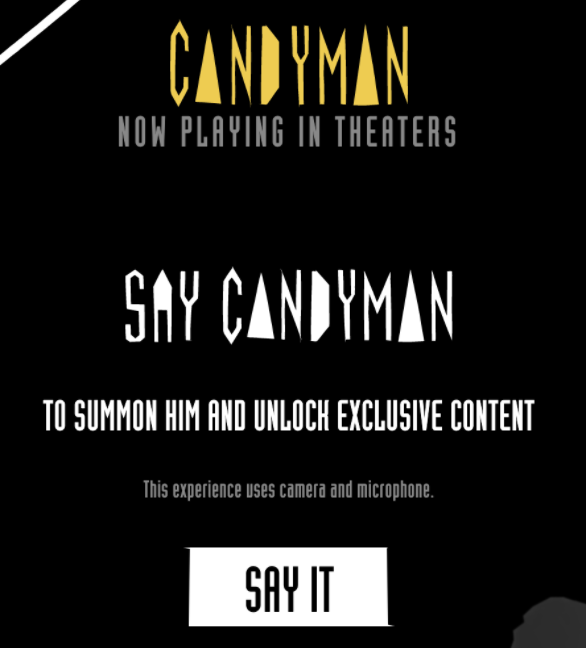 MGM’s Voice-Activated AR Teaser for Candyman
We told you horror was one of the entertainment genres that saw a spike among young consumers last year, and Candyman continues the trend of horror movies bringing in audiences. Directed by Nia DaCosta and produced by Jordan Peele, the movie centers on Anthony McCoy (played by Watchmen star Yahya Abdul-Mateen II) who moves into a loft in a gentrified neighborhood in Chicago, and learns the terrifying truth behind the legend of Candyman. Ahead of the movie’s premiere in August, MGM and Monkeypaw Productions teamed up with augmented reality company 8th Wall to create an AR teaser that let people call on the Candyman killer. The voice-activated AR tool used 8th Wall’s proprietary SDK, the camera, and microphone on a user’s mobile or desktop device to layer frightening images on a user’s phone as they repeat “Candyman” over and over—invoking the “Candyman” just like the characters in the film call upon him. Once the final scare occurred after repeated “Candyman” mentions, users were able to view the film’s trailer. YPulse told you how brands are using AR tools to engage with Gen Z and Millennials, and Candyman’s approach took the concept to a (scary) new level. Meanwhile, last year Peele “dared” his followers on Twitter to tweet #Candyman five times in one post as a way to activate an exclusive clip of the movie. Clearly, the marketing must’ve worked: During its first week in theaters, the movie took the number one spot in the domestic box office (which marked the first time a film directed by a Black woman took that top spot), and exceeded expectations by raking in $22.3 million (above the projected $15 million) during its opening weekend alone. 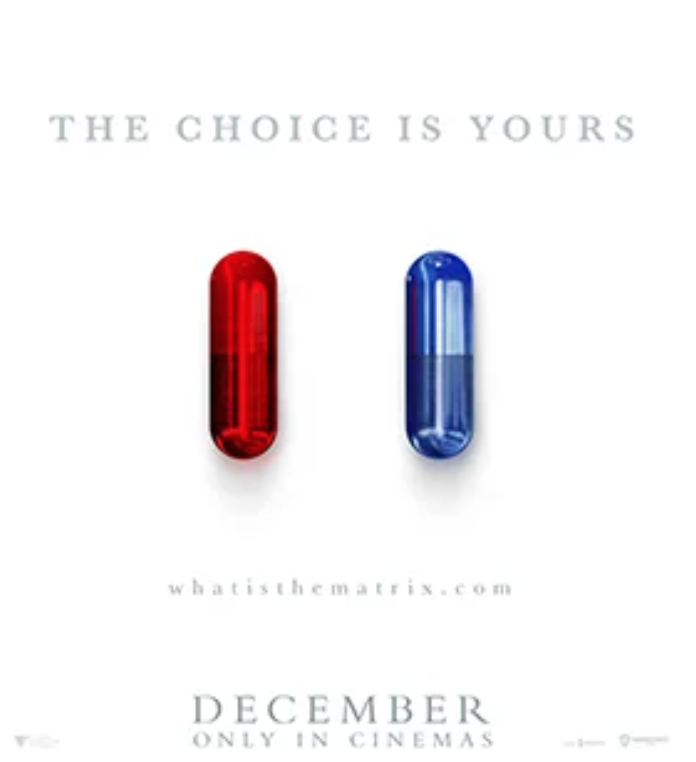 Warner Bros. Interactive Trailer for The Matrix Resurrections
It’s been 18 years since the last Matrix film came out, but The Matrix Resurrections is premiering this December to pick up where the story left off. In the fourth installment of the beloved sci-fi franchise, Neo (portrayed once again by Keanu Reeves) takes an unexpected turn in life when he finds himself back inside the Matrix. As a way to get moviegoers and diehard fans excited for the upcoming flick, Warner Bros. teased exclusive footage last month by launching an interactive site WhatIsTheMatrix.com a few days before the official first trailer dropped. When users initially went to the designated site, they were presented with the option of choosing between the infamous “red” or “blue” pill—just like in the original 1999 film. (By now, fans know that the red pill allowed Neo to be free from the Matrix, while the blue pill would let him continue enjoying his “fake life.”) Depending on which pill and whatever time during the day that they used the site determined which teaser clip a user was able to watch. The site reportedly featured 180,000 video variations that included narrations and snippets of the film and its cast—including a quick clip of Yahya Abdul-Matten II in the bathroom, a “frenetic” motorcycle chase sequence, Jonathan Groff with his mouth melting shut, and a scene of Neo reuniting with Carrie-Anne Moss as Trinity. 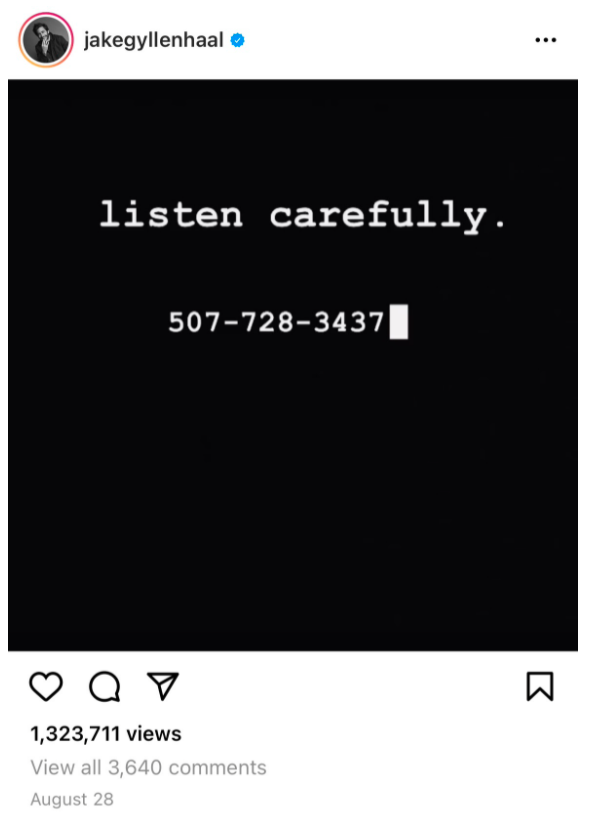 Netflix’s Cryptic Phone Number for The Guilty
The streaming service is no stranger to advertising their content in innovative ways and to promote one of their latest movies The Guilty, which focuses on a troubled 911 operator (portrayed by Jake Gyllenhaal) who finds himself in a series of harrowing events while attempting to save a distressed caller, the actor shared a cryptic post on his Instagram account at the end of August, which garnered more than a million views, asking his followers to “listen carefully,” followed by a number. While the post was initially filled with comments from confused and curious fans wondering who would greet them at the end of the line, those who were willing to dial the number heard Gyllenhaal on the other line as the 911 operator in the movie, who seemed to be talking to someone as if he were in the middle of saving them. Days after the cryptic post, Gyllenhaal confirmed he was promoting the new flick by sharing more graphics and debuted the full trailer on his Instagram. Meanwhile, residents in LA and OC have reported seeing clues “on the sky” prior to the film’s premiere that led them to access exclusive clips and footage of the movie. Following the film’s debut, it was one of the streaming platform’s most-watched movies in the U.S.

North America
TikTokers are Mixing LaCroix with Balsamic Vinegar & Calling it “Healthy Coke” on The Viral List
TL;DR: TikTokers can’t get enough of “healthy coke” which combines sparkli...
North America
Stranger Things Fans Helped Bring This 1985 Track to the Top of the Music Charts
TL;DR: A Kate Bush song from 1985 is at the top of the music charts for ...
North America
Pretty Much Everyone Is Playing Wordle on The Viral List
Wordle (no, it’s not an app) is the new Words With Friends, the Golden Globes Awards ...