These Entertainment Genres Have Been Getting More Popular with Young Consumers 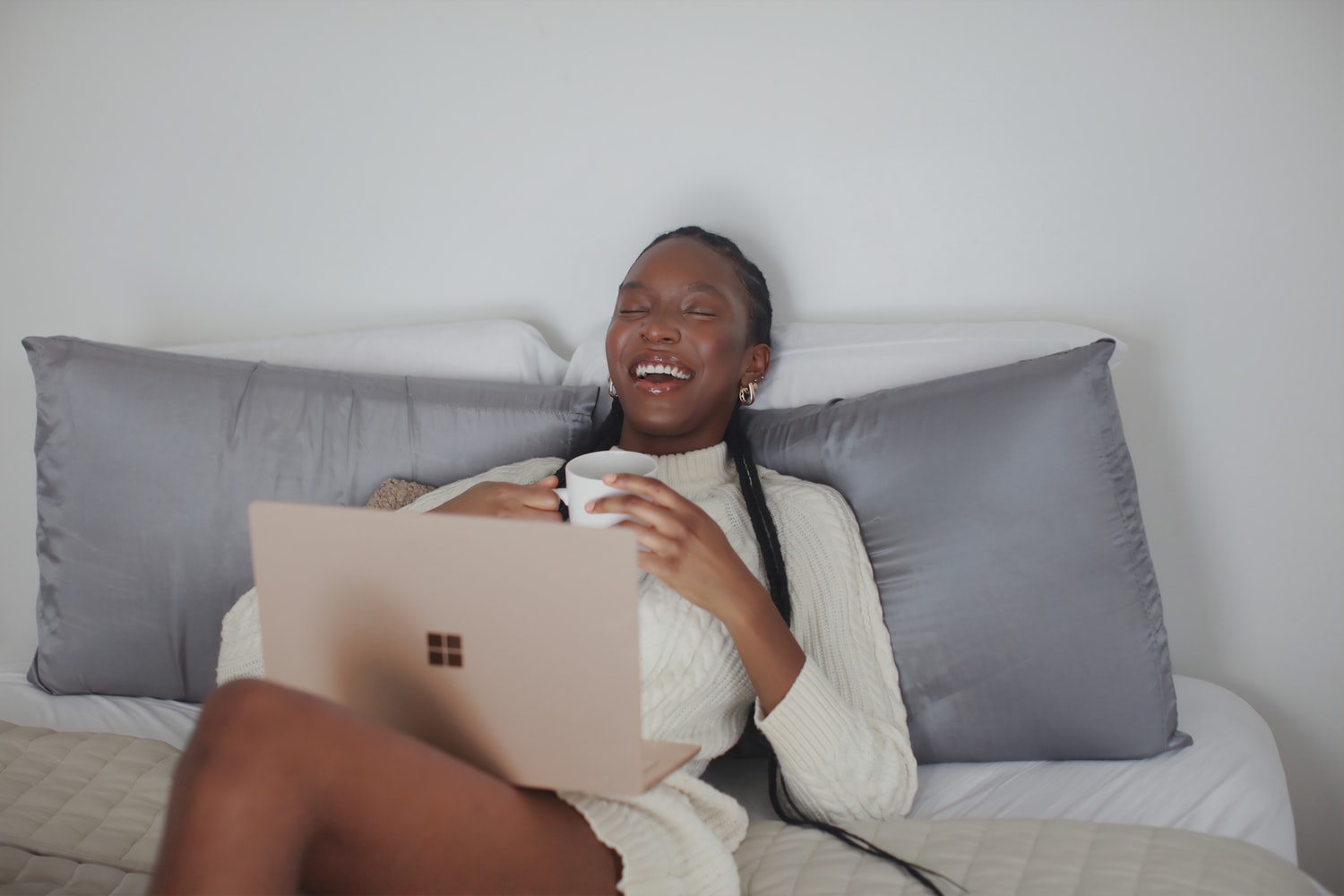 What kinds of entertainment content is getting more popular with Gen Z & Millennials? YPulse’s data shows what genres have gotten boosts among young viewers in the last few years…

The last two years have been a whirlwind for the entertainment industry, with streaming platforms proliferating, viewing fragmenting, and, of course, COVID turning everything on its head. The time that young consumers spent in quarantines in 2020 increased their demand and desire for entertainment, sparking major trends for viewers and the industry. But according to YPulse data, these years have also shown shifting content preferences among Gen Z and Millennials.

YPulse’s media consumption monitor measures young consumers’ entertainment behaviors quarterly, from what platforms they’re watching to, yes, what genres of video content they’re viewing weekly. We ask 13-39-year-olds “What type of video content are you watching weekly?” and clarify, “Video content can be movies, TV shows, series on streaming services, online videos, etc.” They can then choose from 28 entertainment types, ranging from comedy, drama, and romance to vloggers, how-tos, and unboxing. When we compare the 2019 and 2021 data in what genres respondents report watching weekly, we see that while interest in many has remained flat, and some have dropped, a few have seen viewing surges: 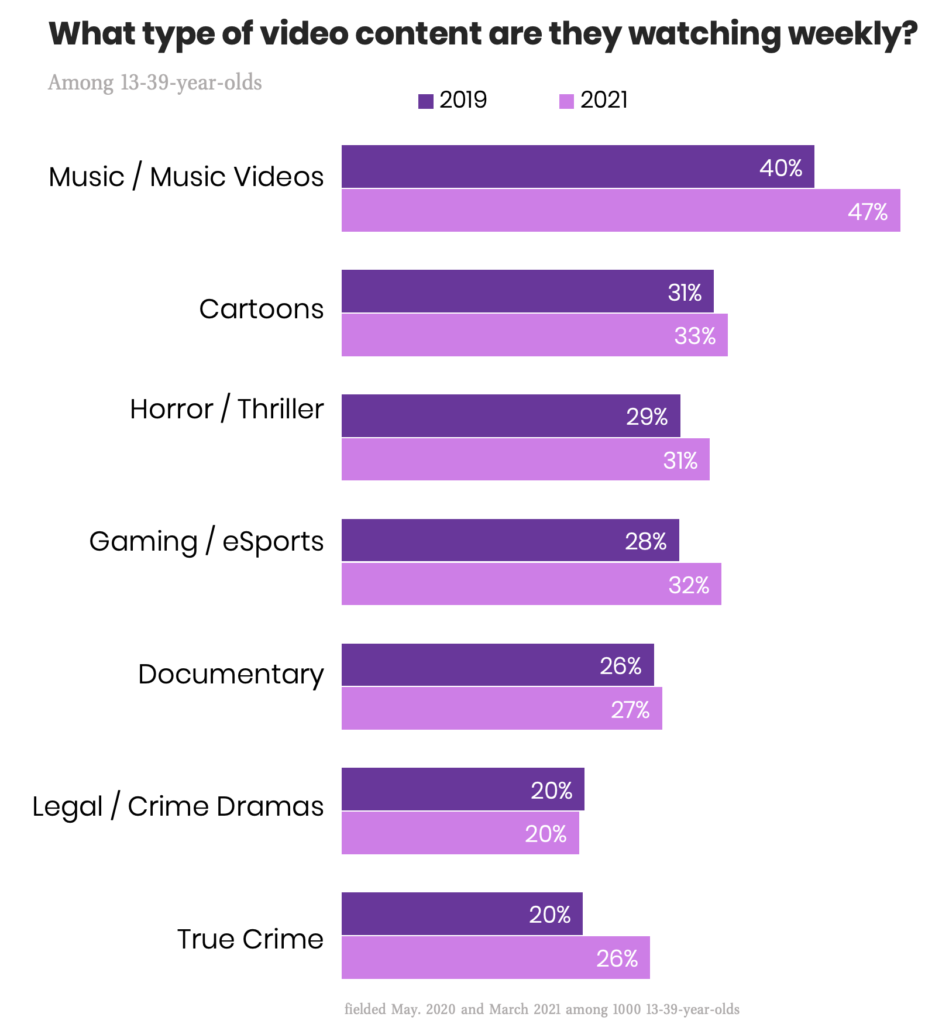 Music / Music Videos content is the type that saw the biggest increase in viewing. From 2019 to 2021, YPulse’s media consumption report found that the category increased from 40% to 47% for 13-39-year-olds. The rising popularity of Music / Music Videos content was strongest among Millennials, where it jumped significantly from 39% to 49%. In the last year, the way (and where) young people consume music has changed. Our Music report found that 44% of 13-39-year-olds agree: “COVID-19 and quarantines have changed the way I listen to music.” Last year, “Social media” and “YouTube videos” moved to the top ways young consumers discover new music artists and songs. And, of course, we can’t ignore the impact of TikTok. The platform has made videos that focus on music all the more ubiquitous, and tied music and video together in a new way. It is no coincidence that the last two years has seen the massive growth of the platform among young consumers, and the growth in the popularity of music video content in tandem.

Another genre that saw an increase is Gaming / eSports, which went from 28% to 32%. While it is a smaller increase, it should be noted that gaming as a whole became even more popular among young consumers last year: YPulse’s gaming report found that 94% of 13-39-year-olds play video games at some capacity, while 46% watch other people play video games. Video games like Animal Crossing: New Horizons and Among Us become hotspots for hangouts, while other gaming-related platforms like Roblox, Fortnite, Discord, and Twitch soared in popularity as well. But clearly it wasn’t just individual games and gaming platforms that saw surges in popularity, but gaming video content as well.

True Crime jumped from 20% in 2019 to 26% in 2021, while Horror / Thriller saw a minor spike as well. But interestingly, when we dig into the groups driving the increases in viewing popularity for the genres above, it’s young females who are fueling it, nearly across the board: 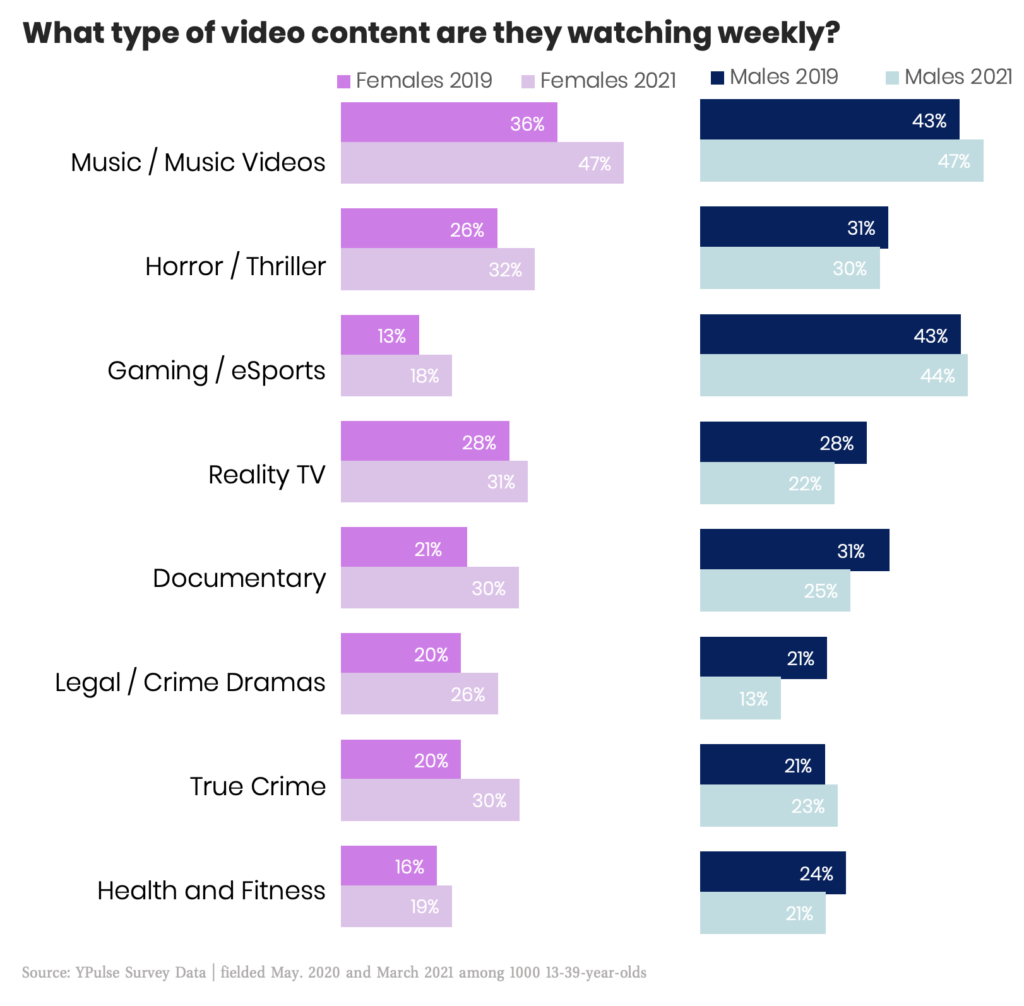 Music Content, Horror/Thriller, Gaming/Esports, Documentary, Legal/Crime Dramas and True Crime all saw increased viewing among young females between 2019 and 2021. Not only that, many of these genres so dips among young males, showing that young females are truly the one driving their popularity.

True Crime saw one of the most significant increases among females during that time frame: YPulse found that 30% of 13-39-year-old females are watching True Crime content compared to 20% in 2019. Last year, true crime docuseries (like Netflix’s Tiger King) were major cultural touchpoints, and true crime has become a go to genre for streamers from Netflix to HBO Max. Here, we see that young females are the ones responsible for its popularity.

Meanwhile, Horror / Thriller saw an increase specifically among Millennial females, jumping from 22% to 35% from 2019 to 2021. In the last year, streaming services have been heavily investing in horror content. Previously, the genre was shunned by Hollywood, but horror-focused companies like Blumhouse Productions have been creating content specifically for streaming platforms like Amazon Prime, while horror shows and movies have been doing particularly well across Netflix, Hulu, and of course, Prime Video. Niche streaming services like Shudder have reported that their subscriber numbers and daily engagement have steadily increased in the last year as well—and even surpassed one million subscribers in September.

It should not be ignored that while Gaming/eSports content viewing remained steady among young males, it saw a five point increase among young females during the last two years. While males remain the majority of gamers, young females are a growing gaming audience, and one that brands should not ignore.

Looking at the increases by gender also reveals that there are a few content types that didn’t see major increases among young consumers overall, but that young. females specifically have been watching more since 2019. Reality TV, and Health and Fitness have seen small bumps among young female viewers, and are likely to draw this demo—which is good news for platforms like Netflix, which have been investing in it significantly.