In February of this year, we outlined TikTok’s massive growth among Gen Z and Millennial users. But then a lot happened. (To put it lightly.) In the months since, we’ve not only seen a pandemic, which pushed young consumers into new behaviors and patterns, but a huge amount of drama for the up and coming video app. Throughout the tumultuous year, we’ve been keeping tabs on how Gen Z and Millennials’ social media use has been impacted by it all. With the majority of young consumers in quarantine, staying connected and entertained quickly shifted from leisure to an essential—and social platforms have been getting even more of their attention than before. Gen Z and Millennials are spending more time on social media, and the majority say their behaviors on the platforms have changed since the Coronavirus crisis.

But this hasn’t resulted in universal gains for all social platforms. There is more competition for their attention, with niche spaces and newcomers on the rise, and gaming platforms evolving into social centers during the crisis. Now, our latest social media survey has served up the most up-to-date stats on what platforms they are using now—and which have been winning and losing young users this year.

Gen Z and Millennials’ top social platforms are not the same, so we’ll be looking at changes to their social media use this year separately, starting with Gen Z. Here are the top ten platforms they tell YPulse they’re using, with usage in January compared with usage in August:

For the most part, all of Gen Z’s top platforms have seen usage gains with the group this year—even Facebook has seen reported usage among 13-19-year-olds grow from 32% to 39% in 2020. Other platforms have seen even more significant usage increases, with Snapchat use jumping 10 points and Discord 12 points. But no app has seen the amount of growth that TikTok has: over half of Gen Z teens now use the app, a 19 point increase in just eight months time. When we look closer, young females are driving the app’s popularity: 69% of Gen Z females use the app compared to 39% of Gen Z males.

And what about Millennials? The stats on the top platforms that they’re using show shifts in behavior as well, but this time not all in an upwards trajectory:

Millennials are far more likely than Gen Z to have slowed their use of some platforms during 2020: use of Facebook, Instagram, Facebook Messenger, and Twitter have seen dips. One potential culprit? Bad news burnout. We know that young consumers are getting their news from social media, and it could be that Millennials are beginning to spend less time on the platforms that, well, bum them out, and more on the platforms that serve them entertainment. Usage of YouTube has jumped seven points among 20-38-year-olds this year, Snapchat and Reddit use has remained strong, with the latter bumping up six points. But here again, TikTok has seen the biggest gains, with over a quarter of Millennials now reporting they use the app, an eight point increase since January.

It seems that nothing—pandemic or ban news—has slowed TikTok’s growth with young users. Here’s an updated look at exactly how their use has accelerated in under two years: 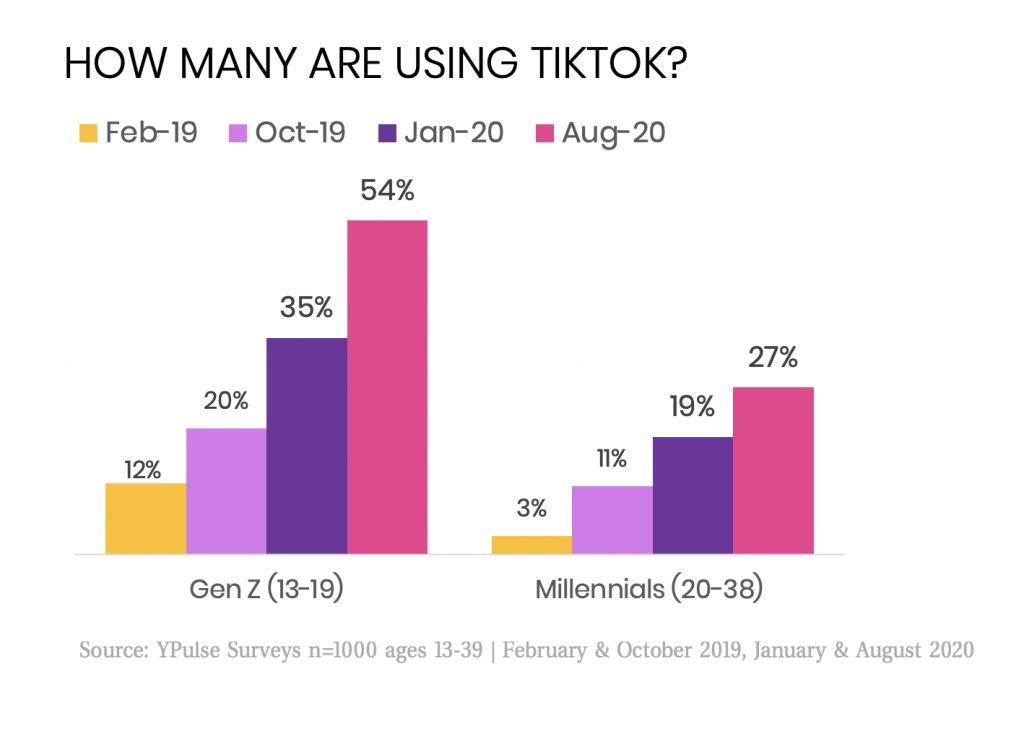 TikTok’s growth during 2020 alone has been significant. In January, 35% of Gen Z and 19% of Millennials were using the platform, a significant jump from October of 2019. In the months since, the platform has grown even more rapidly among young consumers than it did in the months before. YPulse found that TikTok is now second in the ranking of their favorite apps. The top reasons that they love TikTok are simple and straightforward: it’s fun, funny, and entertains them for hours. When we asked young people about a potential TikTok ban, users were perhaps most likely to say that without the app they would be bored, or “bored as f” in the words of one respondent. Some even said that a TikTok ban would mean they would spend less time on their phones, or that it would “change [their] daily schedule” because they use it so much.

With a TikTok ban looking less likely (President Trump has tentatively approved a deal that makes Oracle and Walmart partners in the newly created, U.S.-based TikTok Global) it’s a pretty safe bet that TikTok will be maintaining their spot as a favored app among young consumers. And if the last year is anything to go by, it could be one of their top used apps in record time.