Gen Z and Millennials are not getting their news in the same places, and the younger generation is fueling new platforms as news sources…

It has been a year of historic headlines, and 2020 is changing the way that young consumers get their news. YPulse’s latest news consumption and trust survey found evidence of some serious news burnout, as well as growing mistrust in news sources. But we also found some distinct and increasing differences in where Gen Z and Millennials get their news.

Of course, it’s not news that they’re getting their news from social platforms—social media has been the top news source for Millennials for some time. When we ask what sources these young consumers use to get news and information, Gen Z and Millennials are equally likely to say social media: 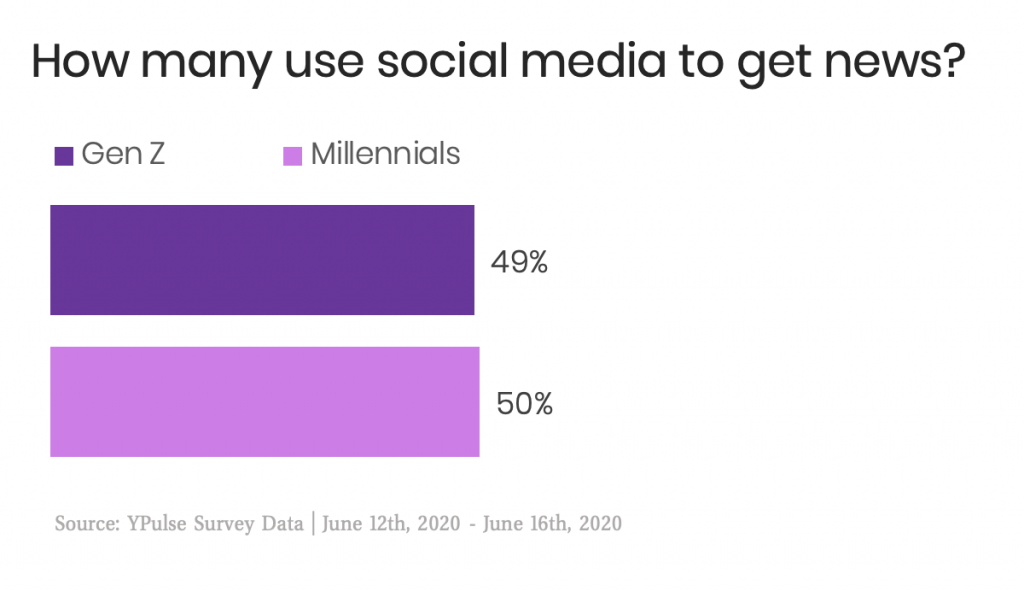 Interestingly, both generations were less likely to say that they get their news from social media this year, with Gen Z decreasing from 58% in 2019 to 49%, and Millennials dropping from from 65% in 2019 to 50%. There are likely several factors at play here: the change in their routines and increased time at home is shifting some of their news consumption to other sources, while their wariness of fake news on social platforms changes their likelihood to view them as true sources. Of course, social is still the top named source for both groups by a significant margin; but Millennials are also more likely than Gen Z to get their news in other ways, including newspapers, websites for print newspapers, and news email updates. Meanwhile, Gen Z is more likely than Millennials to say they rely on word-of-mouth for news.

But while both groups use social media far and above all other news sources among, there are still major differences in how these generations are getting their news. Gen Z and Millennials who use social media as a news source are looking to very different platforms:

Gen Z is fueling the use of new social spaces as news sources. The younger generation is far more likely than Millennials to use Instagram, YouTube, Snapchat, and, yes, TikTok, to get their news. Recently, Reuters Institute reported that Instagram is set to overtake Twitter as the top news source among young consumers with 75% of under-25-year-olds saying they use the platform for news. But we’ve been tracking Instagram as Gen Z’s top social news source for some time, and our data clearly shows that among this younger generation many other platforms already outpace Twitter as news sources. One thing that ties their top social news sources together is video—the apps that they’re using for news the most are mostly video-first platforms, and Gen Z is far more likely to say that they keep up with news via video (57%) over text (43%).

While Millennials are also more likely to say they keep up with news via video over text, the top social platform that Millennials use for news is still Facebook—and Gen Z just isn’t following their lead. Instead, they’re getting their news where they are getting their entertainment.

As we mentioned, trust could be playing a role in young consumers’ slow-down on using social media as a primary news source—and we also found that Gen Z trails behind Millennials on trusting information on social platforms:

Editor’s Note: A previous version of this article stated that Gen Z was more likely than Millennials to use social media to get their news, to consider social media their primary news source, and to trust the news they see on social platforms – it has been corrected with updated data to accurately reflect Gen Z’s news consumption.