4 Brands That Churned Up Buzz with Unexpected Ice Cream 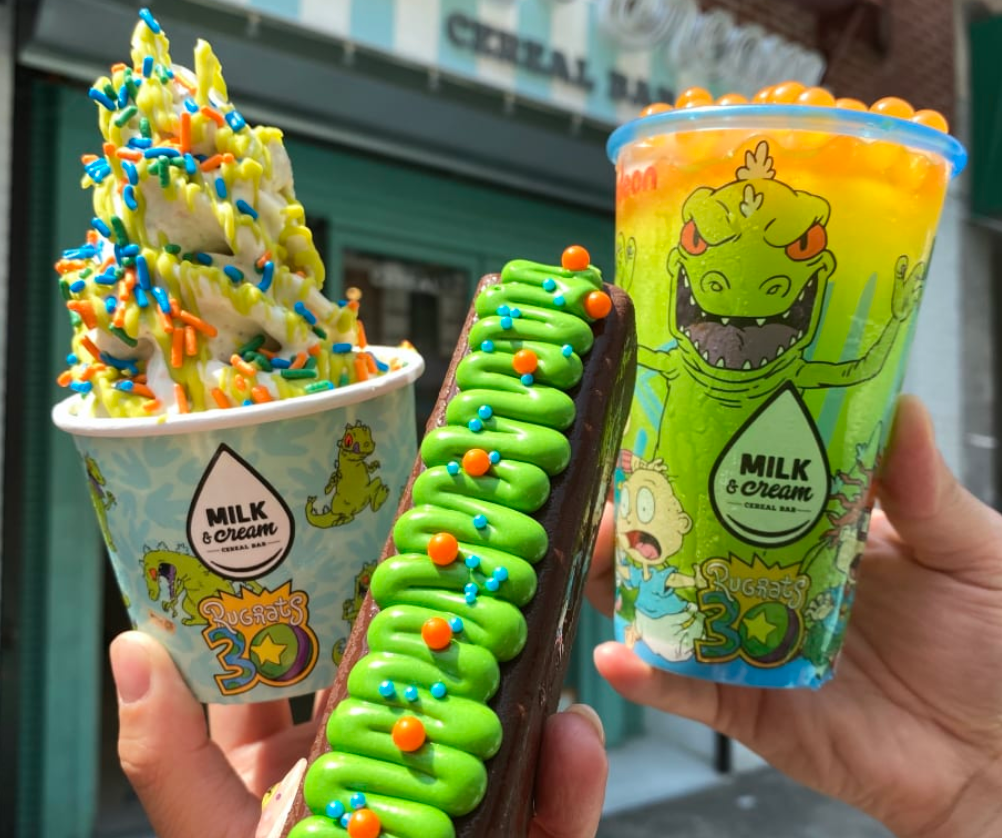 The way into a young person’s heart is through ice cream. Here are four brands reaching them through limited-edition collaborations with ice cream makers…

Gen Z and Millennials can’t get enough of unusual summertime treats. Last year, White Claw slushies were all the rage, and this year frozen honey is taking over feeds. Regular ice cream will do as well—YPulse’s Comfort in the Kitchen trend research found that 40% of 13-39-year-olds eat ice cream / ice cream treats as a snack on a typical weekday. Now it seems like the more unique the cool sweet treat, the more they want it.

A few years ago, brands were collaborating with beer brands for surprising flavors and marketing pair ups—now, ice cream is the hottest brand collab in town. Here are four brands serving up unusual ice cream that’s got young consumers talking (and crashing sites to buy it): 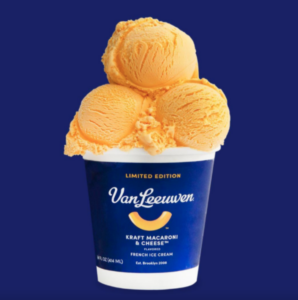 In honor of National Mac & Cheese Day this year, Kraft Heinz leaned into weird marketing, and teamed up with Brooklyn-based ice cream maker Van Leeuwen for a macaroni and cheese-flavored ice cream. Described by both companies as a “cool, creamy scoop of ice cream that brings that comforting, nostalgic feeling from a warm bowl of Kraft Macaroni & Cheese,” the limited-edition flavor dropped last month online and at Van Leeuwen locations in NYC for $12 a pint. The morning of its release, Kraft announced on Twitter that their collaboration caused their servers to be overwhelmed and their site to crash. After a few hours, the cheesy frozen treat was already sold out, though they did launch a giveaway the following day to give 100 people a chance to win the remaining stock of their pints at MacIceCream.com. Sure, while the ice cream was in high demand, it also caused divided reactions on the internet: Some claimed that the flavor is what “greets you at the gates of hell,” while others say it was “very good.” Others compared it to the cheese ice cream in the Philippines, where the flavor is popular. But one thing’s for sure: If ice cream is already a comfort food for young people, adding mac and cheese (another comfort food staple) into the mix was a definite way to get young people’s attention. 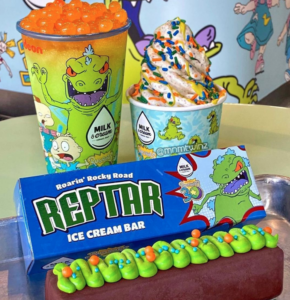 New York-based Milk & Cream Cereal Bar knows how to stir ‘90s and ‘00s nostalgia in their customers: Previously, they’ve teamed up with classic animated franchises like Teenage Mutant Ninja Turtles, SpongeBob SquarePants, and Care Bears. And their most recent collaboration specifically targeted ‘90s kids: In honor of the Rugrats 30th anniversary and the revival on Paramount+, Nickelodeon collaborated with the dessert chain for a limited-edition, custom line of “Reptar on Ice Cream” ice cream products that involves three menu items inspired by the babies’ favorite green fictional dinosaur. First up is the Reptar Swirl Sundae, a “yummy blend of green Reptar Cereal swirled into creamy vanilla ice cream and topped with neon green-colored chocolate syrup and sprinkles.” Then, there’s the Reptar Slushie, which is a combination of green apple-flavored and mango-flavored boba tea bubbles. Finally, the Roarin’ Rocky Road Reptar Ice Cream Bar has caramel ice cream combined with Kit Kat pieces and marshmallows, all covered with a thick boat of milk chocolate—and the bar turns customers’ tongues green (just like in the cartoon). 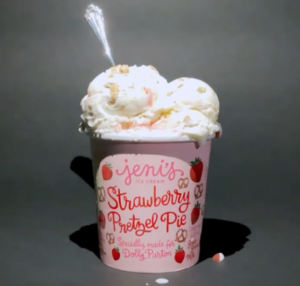 Creating menu items and flavors backed by celebrities has become a popular way for food brands to grab young customers’ attention, and our recent celebrities and influencers behavioral report found that 31% of 13-39-year-olds are interested in food collaborations between influencers and brands. Cue country singer Dolly Parton, who is always making headlines. In late March, Jeni’s Splendid Ice Cream announced that they were teaming up with Parton (who shared news about the collab on Instagram to her 4.1 million followers) to release a limited-edition Strawberry Pretzel Pie flavor with only 10K pints available nationwide. The flavor was released online and in stores, and the demand was so high that it immediately crashed the Jeni’s site when it dropped, leading to both confusion and disappointment from loyal fans. It was highly in-demand in-person too as customers shared images on social media showing lines wrapped around Jeni’s Ice Cream shop locations around the country. One user even tweeted that the ice cream flavor “is harder to get than any Air Jordan [they’ve] ever seen.” But this isn’t the first time Jeni’s collaborated with a big star: In 2019, they teamed up with Tyler the Creator for two exclusive flavors, which “flew off the shelves at the time,” and earlier this year, they released a White House Chocolate Chip flavor inspired by President Joe Biden. Last month, inflatable pool brand Minnidip also partnered with Jeni’s for a different kind of collab: A summer-themed collection consisting of pool party essentials inspired by the brand’s most popular flavors like Frosé Sorbet, Lemon & Blueberries Parfait, Brambleberry Crisp, Lemon Bar, Green Mint Chip, and Wildberry Lavender. 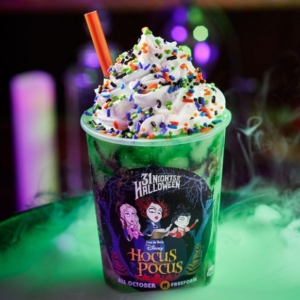 Freeform x Carvel
Ice cream isn’t just for the summer. Last fall, to promote their annual “31 Nights of Halloween” event, Freeform teamed up with Carvel to release the “Hocus Pocus Shake” in honor of the 1993 Disney cult classic film. During the month of October, customers had the opportunity to order a milkshake, which also came with a reusable limited-edition cup featuring artwork inspired by the movie, made up of Carvel’s vanilla soft serve ice cream combined with crushed Oreo cookie pieces, whipped cream, and Halloween-colored sprinkles. According to Freeform Vice President of Social Media, Digital Marketing, and Synergy Dalia Ganz: “We teamed up with Carvel to share our love of Halloween tricks and treats with consumers across the country and get them even more excited to watch their favorite Halloween movies on Freeform.” We told you how young consumers were still excited to celebrate Halloween last year despite being cooped up inside, and offering up special treats (along with the usual candy) inspired by a Halloween movie favorite, is another way to keep their sweet tooth satisfied.

YPulse Business users can access the full Comfort in the Kitchen trend report and data here.