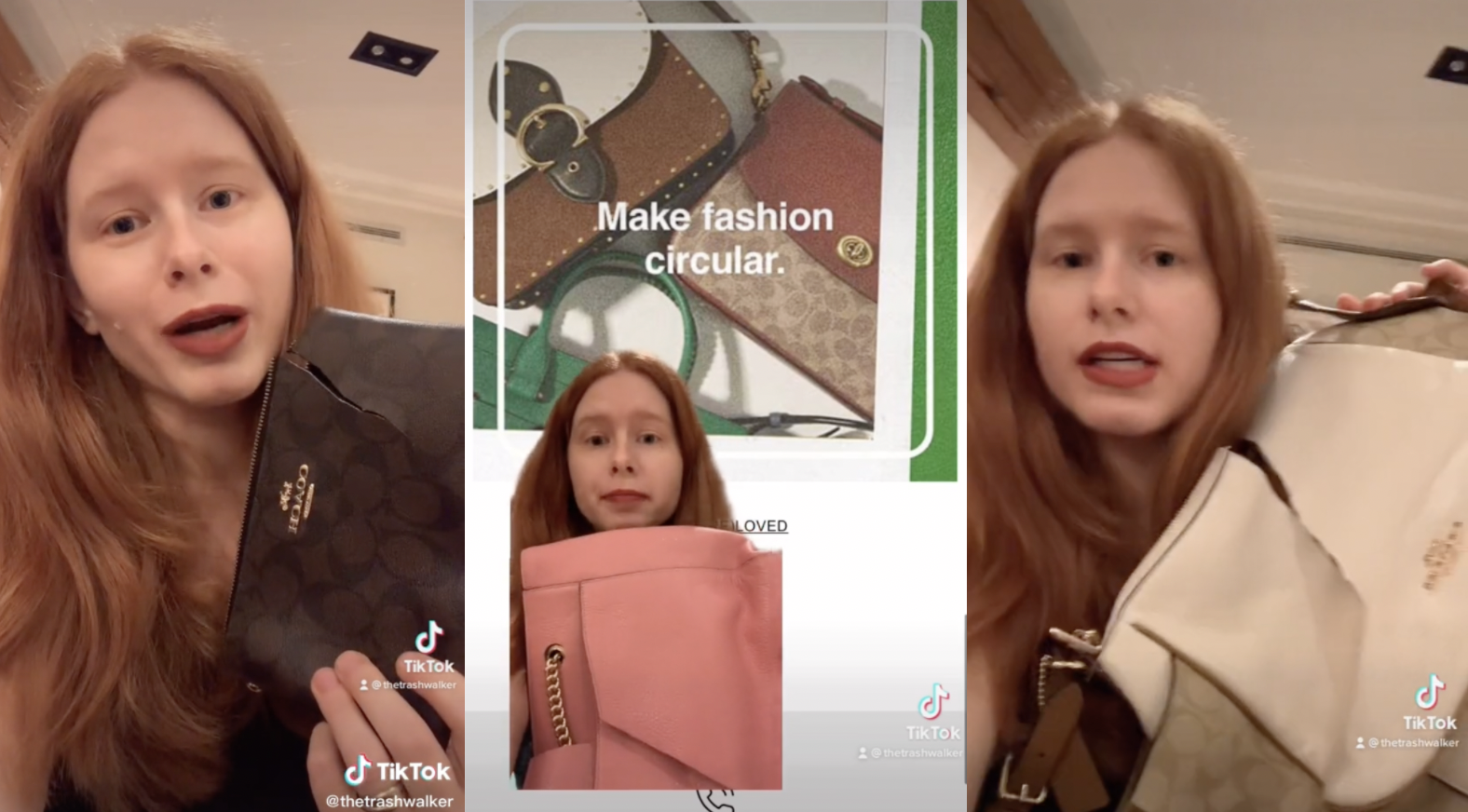 Coach is being held responsible for destroying “unsalable” merchandise, DC Comics announced the fifth issue of Superman: Son of Kal-El will follow the new Man of Steel’s relationship with a male reporter, Jesy Nelson’s “Boyz” single is sparking backlash from fans, red flag memes are taking over the internet—plus more internet buzz on this week’s Viral List! 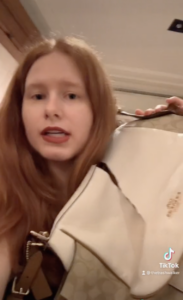 Anna Sacks, a.k.a. The Trash Walker on TikTok, is a sustainability activist who often posts about her “trash finds” while building awareness for how brands and retailers really deal with excess inventory—i.e. throwing it away. In a TikTok video (garnering more than 2.2M views), Sacks reveals her recent Coach trash finds, detailing a collection of slashed purses that are in near perfect condition. According to Sacks, the process is routine for Coach, as they delegate an employee to damage the unwanted purses before throwing them away so they can use it as a tax right-off. She calls out how the slashed purses directly contradict Coach’s sustainability claims on their website, like how they’re committed to making fashion more circular and “don’t ditch it, repair it,” referencing their “(Re)Loved” bag repair program. More than 7,000 people have commented on Sacks’ video, thanking her for holding corporate fashion brands like Coach accountable while requesting that all brands “do better” when it comes to making claims about their sustainability efforts and environmental impact. Coach responded to the claims in an Instagram post, explaining that they “have now ceased destroying in-store returns of damaged and unsalable goods.” Sacks and Coach both spoke to Forbes on the issue, and Coach explained that the merchandise Sacks was referring to had been returned and “was otherwise damaged and unable to be sold or donated” and is only a small percentage (1% to be exact) of their global products. Sacks questions that statement, however, and notes that she wants to see Coach commit to stop damaging all of its items it considers unsellable—not just returns. Sacks also spoke to BuzzFeed News, explaining that she’s proud that her TikTok inspired change, but reminds viewers that social media activism is only a start: “It can’t just be social media; it has to be social media paired with emails and calling…Politicians don’t log comments and shares. It might catch their attention, but they don’t log it the way they log the number of calls and emails.” And while Coach’s response is a start, Sacks reminds brands that spouting off sustainability claims won’t cut it if they’re truly committed to creating a better environment and climate. YPulse’s sustainability research found that 51% of Gen Z and 42% of Millennials believe brands should be incorporating eco-friendly practices into all aspects of their business, and they’re becoming more weary of “green washing” as they continue fighting for a better environment and future. 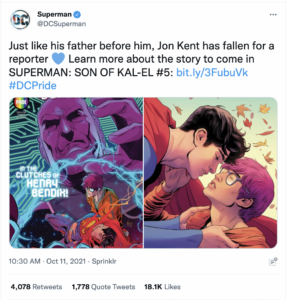 Following the confirmation of Robin’s bisexual identity revealed in Batman: Urban Legends #6, DC Comics has confirmed that Jon Kent (child of Clark Kent and Lois Lane) is also bisexual, and will explore his relationship with male journalist Jay Nakamura in the fifth issue of Superman: Son of Kal-El dropping November 9. The upcoming series follows Kent as he embarks on his role as Earth’s new Superman and the pressure of his responsibility, all while falling for Nakamura, his trusty friend who first appeared in the series’ third issue. DC Superman announced Kent’s relationship with Nakamura in a Twitter post garnering 3,811 retweets and 17.4 likes, and fans and experts are celebrating the news, explaining how it’s a historic moment for LGBTQ representation. And for all the haters who claim DC Comics is “turning superheroes into characters that they’re not,” series writer Tom Taylor explains the new Superman is still Superman, just with a deeper understanding of his (and his fans’) identity: “Superman’s symbol has always stood for hope, for truth and for justice,” Taylor said in a statement. “Today, that symbol represents something more. Today, more people can see themselves in the most powerful superhero in comics.” Taylor first teased the nature of Superman’s relationship in an August interview with Nerdist, explaining that “[Jon Kent] gets one very good friend very early on, by issue three. Someone that he can talk to, that can be a confidant like Damian Wayne. And they’re going to have a big role in this.” NPR’s Glen Weldon notes that putting queer characters like Superman and Robin at the forefront of comic series is “progress,” and represents a momentous shift in the plot as LGBTQ identities are represented in the main characters/heroes, not just the background stars. YPulse’s Gender Blur trend research shows that 22% of Gen Z and Millennials identify as LGBTQ, and exploring their diverse identity in popular comics series like Superman is a historic moment for representation in entertainment. 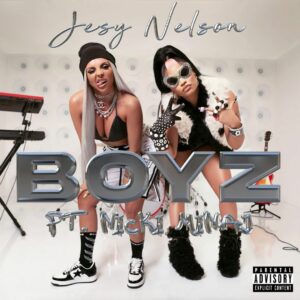 Jesy Nelson is Being Accused of “Blackfishing” and Cultural Appropriation

This week, the British singer’s new single “Boyz” —Nelson’s first release as a solo artist since leaving Little Mix last year—featuring Nicki Minaj debuted on YouTube, quickly racking up more than 1.4 million views while becoming number one on the platform’s Trending page. Influences that derive from Black hip-hop culture are present throughout the lyrics and accompanying music video, and listeners are speaking out about Nelson’s forced accent and darkened skin in the video, accusing her of cultural appropriation and “Blackfishing” (when someone changes their appearance in order to appear Black or biracial). Blackfishing has started trending on Google in response to fans’ reactions, with searches for Jesy’s background also trending. This isn’t the first time Jesy Nelson has been accused of Blackfishing, either. In a recent interview with The Guardian, Nelson responded to social media allegations in May for Blackfishing: “I would never want to offend anyone, and that was really upsetting. I wasn’t aware that’s how people felt.” Nelson also spoke to Vulture recently about the previous Blackfishing allegations explaining, “I love Black culture. I love Black music. That’s all I know; it’s what I grew up on. I’m very aware that I’m a white British woman; I’ve never said that I wasn’t.” Fans are sharing their thoughts on Twitter, saying the video is “4 minutes of blatant cultural appropriation” regarding her use of influences that stem from Black hip-hop culture like the lowriders, bikes, gold teeth, and the overall aesthetic of the entire production. @dalilah_black tweeted, “Jesy is a 30-year-old Brit WW cosplaying as a 19 year old American mixed-ish/BW from the 00s. You can’t tell me this isn’t misogynoir.” Nelson has responded, denying all accusations for Blackfishing and cultural appropriation. While headlines about celebrities being “cancelled” may seem commonplace these days, “cancel culture” holds public figures accountable for their actions—especially when they harm a culture or identity that isn’t their own. YPulse’s influencers and celebrities research found that young fans want celebrities to apologize immediately and take responsibility when allegations happen—something that has yet to surface from Nelson following her “Boyz” release.

If you’ve been on Twitter this week, you’ve likely seen a slew of red flag memes from brands, celebrities, and pretty much every person who’s active on the platform. Coupled with a “controversial” or highly debated statement like “I like pineapple on my pizza,” users have been using the red flag emojis to share their thoughts on what they believe is an automatic red flag in another person, whether it’s their personality traits, dating habits, or the type of food they eat. Similar to the “Did it Hurt?” memes that surfaced in September, red flag memes have been the focal point of humorous posts from brands including Crocs, Dunkin’, sports teams, politicians, MTV, and even Twitter. One of the most popular tweets is from @tillwaterfall, who shared the red flag emoji with “I don’t like Beyoncé” in a tweet garnering more than 30K likes. Celebrities have also gotten in on it, including artist Tai Verdes, Padma Lakshmi, Dolly Parton, and Kehlani. According to Twitter, the platform has experienced a 455% increase in the number of red flag emojis being used in the U.S. in the last week, and 1.5 million red-flag emoji tweets have been posted across the globe. Memes are a staple of internet culture for young people, and when successfully executed, meme-able moments are one way brands can connect with the trends young consumers are spearheading—if they act fast enough. 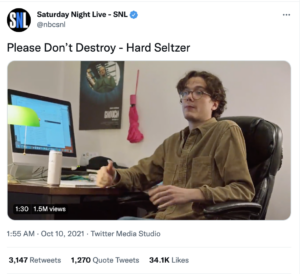 Please Don’t Destroy (a.k.a. the next The Lonely Island) made their SNL debut, and views for their digital short has amassed more than 500,000 views on Twitter and 200,000 on YouTube as fans welcome the return of digital shorts on SNL.

Over 200,000 fans tuned into Adele’s “Easy On Me” drop during a live release on YouTube, the first hit to be released from her upcoming “30” album.

Addison Rae Easterling (one of the most-followed people on TikTok) revealed that she has been suspended from TikTok due to “multiple violations” of the platform’s community guidelines.

Trans employees and allies at Netflix are holding a walkout (on October 20) to protest the streaming service’s support of Dave Chapelle’s special, The Closer, which is being called out for containing transphobic and homophobic content.

Season three of You premiered this week, and has already been renewed for season four.

JoJo Siwa made history (again) on Dancing With the Stars dressed as Prince Charming for her and professional dancer Jenna Johnson’s Disney dance this week.