What do young people think should happen to celebrities if they get cancelled? We asked…

In the last week, another celebrity cancellation story has been taking over headlines. Rapper DaBaby was dropped from multiple music fest lineups, including Lollapalooza and the Governors Ball Festival, after making homophobic comments during a performance. Those comments elicited a swift backlash from users on social media even after he put out an apology—including calls for the rapper to be cancelled.

Last year, we gave you a rundown on what brands need to know about cancel culture. Sure, YPulse’s recent celebrities and influencers behavioral research found that 73% of 13-39-year-olds follow a TV/movie celebrity, musician, online celebrity and/or athlete on social media, but that doesn’t mean they’re afraid to call out their favorite influencers and celebrities. And since we provided our brand explainer, cancellations have continued. Just a few examples: YouTuber David Dobrik lost several brand sponsors and stepped down as co-founder of his app Dispo following rape allegations against his Vlog Squad, cosmetics brand Morphe dropped James Charles following grooming allegations against him, and Chrissy Teigen left Twitter and stepped down from a guest voiceover role on Netflix’s Never Have I Ever after old tweets resurfaced exposing her cyberbullying of a then-16-year-old Courtney Stodden. After her hiatus from social media, Teigen has posted about being part of the “cancel club.”

But it’s important to note that cancel culture isn’t necessarily a “witch hunt” even if some celebrities might feel that way. Suicide Squad director James Gunn, who was fired from Marvel after old inappropriate jokes on Twitter resurfaced, told the New York Times: “People who have gotten canceled and then remain canceled—most of those people deserved that. The paparazzi are not just the people on the streets—they’re the people combing Twitter for any past sins. All of that sucks. It’s painful. But some of it is accountability. And that part of it is good. It’s just about finding that balance.”

And it’s true, cancel culture is a way for young fans to hold those with privilege and power accountable for their actions. After all, YPulse’s Not Waiting For The World to Change trend report found that 52% of 13-39-year-olds believe that cancel culture has been effective at creating social change. But with cancel culture continuing to make headlines, we decided to find out exactly what young consumers think should happen to the influencers and celebrities who get cancelled. Our latest celebrities and influencers report dug into their feelings on cancel culture, and asked: “When a celebrity gets cancelled for a controversial action, what should happen?” 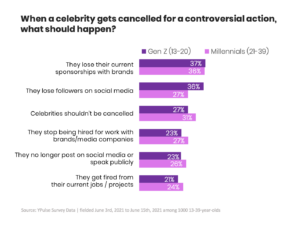 We’ll start with saying that less than a third of young people tell YPulse that they think celebrities shouldn’t be cancelled. The majority believe that there should be consequences when a public figure as done something that they don’t agree with, and the top thing that they tell us they believe should happen is that the celebrity should lose their current sponsorships with brands. Our data shows that the amount of Gen Z and Millennials who want to see celebrities lose their current sponsorships are almost the same, with 37% of 13-20-year-olds saying they should, compared to 36% of 21-39-year-olds. The implication for brands here is clear: if a celebrity you are working with or associated with is cancelled, they expect action will be taken.

Meanwhile, significantly more of Gen Z (36%) think they should lose followers on social media compared to Millennials (27%). As mentioned, Dobrik and Charles were some of this year’s most notable influencer cancellations, with the both losing several brand sponsorships after plenty of backlash. According to Social Blade, Dobrik lost 100K subscribers on YouTube following the news of his allegations, while Charles lost two million followers after he shared an apology video regarding the grooming allegations—so the proof that young fans are willing to unfollow top influencers after bad behavior is there.

Looking at our data some more, Millennials are more likely than Gen Z to say that they think cancelled celebrities should stop being hired for work with brands/media companies, no longer post on social media or speak publicly, or get fired from their current jobs/projects. Going back to the DaBaby controversy, the rapper didn’t only lose his spot in multiple music festivals, his upcoming clothing line with boohooman was also cancelled as a result of his comments. The brand announced the decision on Instagram, where they explained, “Diversity and inclusion are part of the boohoo Groups DNA and we pride ourselves on representing the diverse customers we serve across the globe. We stand by and support the LGBTQ+ community, and do not tolerate any hate speech or discrimination in any form.” And brands should know that according to YPulse data, losing work with and relationships with brands is what many young people think should happen in the wake of a cancellation.

We also asked young consumers what they think celebrities should do in response to a cancellation: 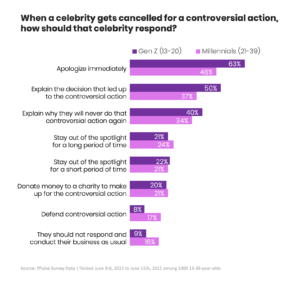 Post-cancellation is no time for hesitation: an immediate apology is the top thing that young consumers want from a celebrity who has been cancelled because of a controversial action. Over half (63%) of 13-20-year-olds say celebrities should apologize immediately compared to 48% of 21-39-year-olds. Overall, Gen Z is more likely than Millennials to expect celebrities and influencers to apologize and explain themselves, with the younger group more likely to say that celebrities should explain their decisions and explain why they will never do the controversial action again. 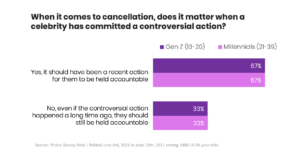 The majority of young people think that celebrities should be cancelled for things that they have done recently, as opposed to things they did a long time ago. This is significant considering there have been several instances (including Teigen and Gunn, both mentioned earlier) where celebs have been cancelled for resurfaced comments or tweets that they made or posted many years ago.

Not all cancellations are created equally, and the action and timing of the action that led to a celebrity’s cancellation both matter. But overall, young people do think that celebs should be cancelled if they’ve done something wrong, and they want brands to cut ties if it happens.