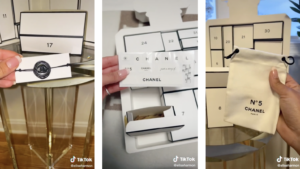 ‘Tis the season for holiday-themed marketing. We’ve seen brands play around with everything from Home Alone-themed shoes and getaways, to festive ugly sweaters, and virtual holiday markets this year. The holidays wouldn’t be complete without brands putting their own spin on the Advent calendar, and companies from Sephora to Williams Sonoma, Godiva, and LEGO have all been releasing coveted Christmas countdown calendars. This story, however, is about Chanel’s $825 Advent Calendar that is proving to be more of a bust than a boon, according to social media. On December 3, TikToker Elise Harmon (@eliseharmon) posted an unboxing video of Chanel’s No. 5 Limited Edition Advent Calendar celebrating the iconic perfume’s 100th anniversary. Harmon shares her excitement as she opens the Chanel No. 5-shaped box saying, “I’ve never seen a Chanel Advent Calendar before…10/10 for packaging.” The first item she discovers are Chanel stickers, forcing her to open another box to make up for her disappointment. The second box contained a hand cream, and after viewers expressed strong interest in seeing what other products were inside the Advent calendar (the video has more than 16M views), Harmon created a video series documenting the rest of her calendar unboxing. Much to her disappointment, Harmon discovers other doors of the calendar contain a dust bag (with nothing in it), stickers, keychains, a magnet, and a bracelet giving “Confessions of a Teenage Drama Queen bottle cap necklace vibes.” And while nicer products like a Chanel lipstick, nail polish, and hand cream were also included, TikTokers were just as shocked as Harmon to discover what was actually inside Chanel’s Advent Calendar (i.e. nothing that seems worth the hefty price tag). The series has been viewed more than 50M times, and Harmon’s most recent video about the calendar shows her lying in bed holding on tightly to the Chanel No. 5-shaped box with overlaid text reading, “When you try to get festive by buying a advent calendar but are left with shattered hopes and dreams.” A comment on one of the unboxing videos sums it up best, “the fyre festival of advent calendars.” Other comments called out Harmon for being disappointed as the calendar’s goods are featured on Chanel’s website. Harmon explains, however, that she wanted to stay true to the advent calendar process by keeping it a surprise (as one does with advent calendars), pointing out that she expected more than some stickers, keychains, and a cheap-looking bracelet from a brand that’s known for quality and luxury—not to mention the fact that most of the products are used as promotional freebies that the brand has given away months prior. Lastly, she bought it in Chanel’s store, which doesn’t list what’s inside. Chanel’s TikTok account is set to private, so people are flooding the brand’s Instagram comments saying, “are we going to ignore that Advent Calendar? We won’t.” While Chanel hasn’t directly responded to the Instagram comments, the brand has addressed the Advent Calendar controversy, defending the pricey gift as “beautifully made” and created “to promote [Chanel] products and not to trigger any controversy.” Chanel isn’t the only luxury brand experimenting with Advent calendars: Tiffany & Co. released a $150,000 (!?!?) version adorned with Jean-Michel Basquiat’s Equals Pi painting from the brand’s “About Love” campaign starring Beyoncé and Jay-Z (fortunately, it includes some items worth the hype, like 18K Gold Triple Drop Earrings). If there’s one thing we’ve learned this holiday season, it’s that luxury advent calendars certainly aren’t for everyone (or the general public—who can afford an $800+ dollar mystery box?), and maybe Chanel should also release a festive holiday sweater next year for those who want a taste of luxury, without the empty dust bag feeling. 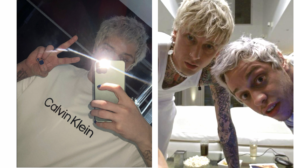 On Monday this week, Calvin Klein updated its Instagram profile picture to an image of Pete Davidson and changed its bio to, “Pete here.” Social media users were (rightfully) confused, but it soon became clear Calvin Klein had enlisted SNL’s Pete Davidson as their new Instagram account “manager”—for some of this week, that is. Davidson introduced himself on Calvin Klein’s Instagram with a mirror selfie of himself in a CK t-shirt with the caption, “I got Instagram” (Davidson doesn’t have a personal IG account). Later, Davidson went live on CK’s Instagram with Machine Gun Kelly, where the two hung out in their white CK briefs and cracked jokes. Two more posts followed Pete’s takeover, including a selfie with Machine Gun Kelly captioned, “did we nail it or did we nail it,” and then a repost of the mirror selfie with a new caption, “this shit’s confusing.” And while it seems strange that Pete Davidson of all people would be CK’s celebrity “host,” the account has seen a surge in engagement from Instagrammers: Pete’s posts have garnered more than 200K likes and 1K comments (much less than what the account typically receives). That wasn’t the end of Calvin Klein’s celebrity Instagram takeovers. On Thursday morning, Squid Game’s HoYeon Jung changed the account’s profile picture to a selfie, updated the bio to a fairy emoji, and posted a mirror selfie in a CK sports bra and briefs captioned, “@calvinklein gave me their password #hired.” Jung’s post quickly outpaced Davidson’s, racking up nearly 4M views and 17.2K comments in seven hours. Calvin Klein has a history of clever marketing—the brand’s Billie Eilish ad was a smashing success for the way it avoided hyper-sexualizing the star—and it makes sense they would want to spice up their social feed with someone as unexpected as Davidson and one of young people’s favorite characters from Squid Game. We’re taking guesses on who the next celebrity “host” will be next week, but for now, let’s take a moment to remember that it is in fact possible for brands to go viral on Instagram (not just TikTok) these days.

From Bernie and his mittens, to “Did it Hurt,” and red flags, we’ve seen a variety of memes take off on Twitter this year. Two more are joining the list, including “The Feminine Urge” and “The Thing That Killed.” According to Know Your Meme, “The Feminine Urge” ironically describes female tendencies and traits. Tweets like, “the feminine urge to finish every sentence with, ‘if that makes sense’ despite knowing it absolutely makes sense” and “the feminine urge to achieve everything in your life before 25” accurately sum up the meme meant to describe a desire (however absurd or sadly realistic it may be) women know all too well. Some of the most popular tweets about the meme have garnered more than 150K likes and hundreds of replies from users describing their own feminine urges. One Twitter user, Toni Kelani, jokingly posted, “why hasn’t anyone felt the masculine urge to send me money?,” opening up a much-needed discussion about how the meme can be “liberatory as a practice” for people of all gender identities, according to Heather Woods, a meme researcher and professor at Kansas State University. New York Times reporter Anna P. Kambhampaty notes the meme is appealing because of all the ways it can be adapted to share a personal experience, and people of all identities and backgrounds have been joining in to share their experiences like  “the nonbinary urge” and “the masculine urge.” Meanwhile, “The Thing That Killed” meme is circulating Twitter as users joke about how normal, everyday things have led to the death of famous figures. For example, one of the most popular tweets (with nearly 350K likes) from @TheHyyyype reads, “you want me to drink water. The thing that killed jack in titanic.” Another from @ElyKreimendahl says, “u want me to watch a video. The thing that killed the radio star.” Memes / viral videos are the No. 1 pop culture moment Gen Z and Millennials say they care about, according to our Pop Culture Redefined trend research, and understanding their origin is key to keeping up with viral trends.

Joe Biden’s Secret Service Agent Is A Major Heart Throb, According to TikTok

Un-officially known as “Biden’s Baddies,” TikTok can’t stop talking about the President’s attractive secret service agents, and one agent in particular is getting a lot of attention on social media. One clip from @life_with_matt captioned, “Forget about the PRESIDENT. The ‘SECRET SERVICE’ be looking fine,” has garnered almost 3M views, documenting the agent as the Bidens were spotted stepping out in Nantucket this Thanksgiving. Another clip from @magsmur is also going viral, telling @life_with_matt that she “called dibs first.” More fans are talking about the agent and posting clips of his outing in Nantucket, calling him “a Tom Cruise in Top Gun” lookalike, while one “starstruck” fan asked, “How can one be arrested by the Secret Service? Asking for a friend.” The jokes continued: “Came to see Joe Biden, stayed for the Secret Service”; “Let your Secret Service guy have a night off so he can take me out”; and “Do all secret service look like that??” According to CNN, the mystery agent has not been identified (which is probably a good thing considering it’s the Secret Service), but that’s not stopping TikTokers from talking about him. 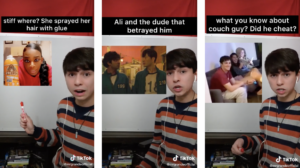 In case you needed a recap of this year’s TikTok trends, this user wrote a song (set to Pharell Williams’ “Come Get it Bae”) summing up some of 2021’s biggest TikTok moments—the clip has more than 5M views.

The Sex and the City reboot, And Just Like That, is officially here, and people can’t stop talking about Peloton’s “Big” moment in the show (warning: spoiler alerts ahead).

BTS announced “they’re taking a break” (no, not like the Ross and Rachel kind) to rest after focusing on concert preparations and the release of a new album—this will be the first time the K-pop band has spent the holidays with their families since their debut, too.

Audio from the anime show One Piece is going viral on TikTok as people joke about their relationships.

The secret recipe for Panera’s green tea drink has been exposed on TikTok, thanks to a young employee.

Jimmy Fallon dropped “It Was A… (Masked Christmas)” song with Ariana Grande and Megan Thee Stallion—the track’s official video on YouTube has more than 2M views.

A U.S. couple had a special metaverse wedding celebration for their digital avatars this week (they got married IRL in September this year), and Twitter users can’t stop talking about it. 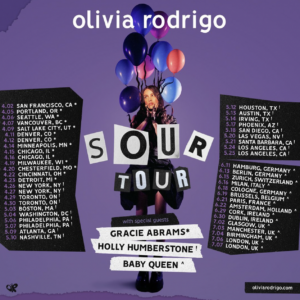 An Olivia Rodrigo tour is happening, featuring Gracie Abrams, Holly Humberstone, and Baby Queen who will all be going on tour with the “Sour” star.

A Shang-Chi and the Legend of the Ten Rings sequel is happening, following the film’s smashing debut this fall.

Sony Pictures Animation released the first teaser for its Spider-Man: Into the Spider-Verse sequel.

Drake requested the Recording Academy to withdraw his two Grammy Awards Nominations for 2022 (it’s still unclear as to why)—and they accepted.