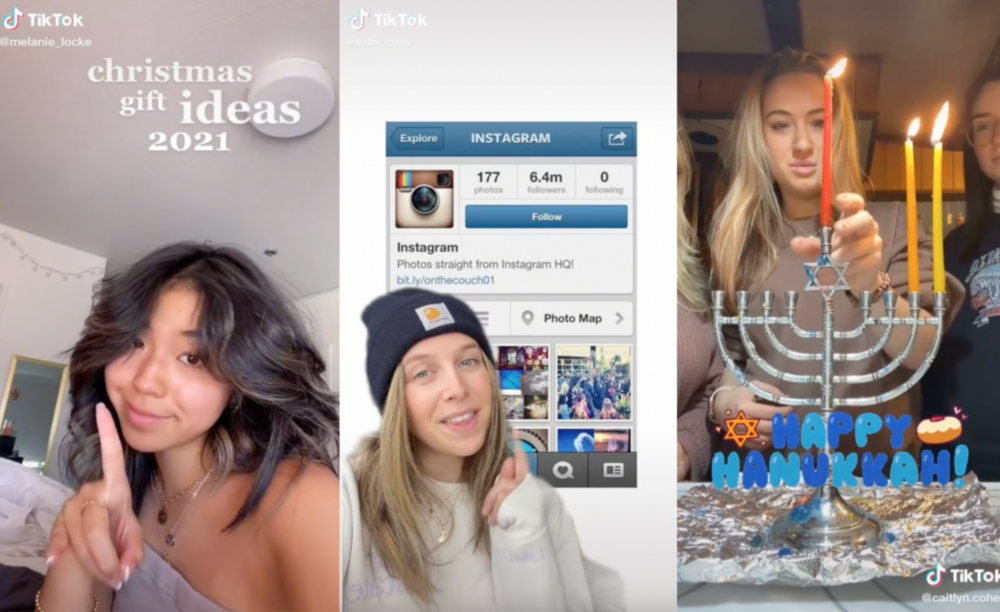 Oh, November. While the latter part of the month was (once again) taken over by Taylor Swift and her devoted Swifties thanks to #RedTaylorsVersion, there were other things that were a major part of this month. #FoodDance took over TikTok as users poured hot sauce on their dishes and, well, danced. Meanwhile, babies chose their own Hogwarts houses, and it’s all over the #SortingCeremony hashtag. Of course, we can’t forget about #Friendsgiving and #CleanLook. And Swift wasn’t the only celebrity that took over TikTok as users participated in the #HilaryDuffChallenge to poke fun (and pay homage) to the Lizzie McGuire star’s now-viral dance from the 2000s (including the star herself). But on an app where the trending content never ends, there were even more hashtags that took over the app this month. Here are six: 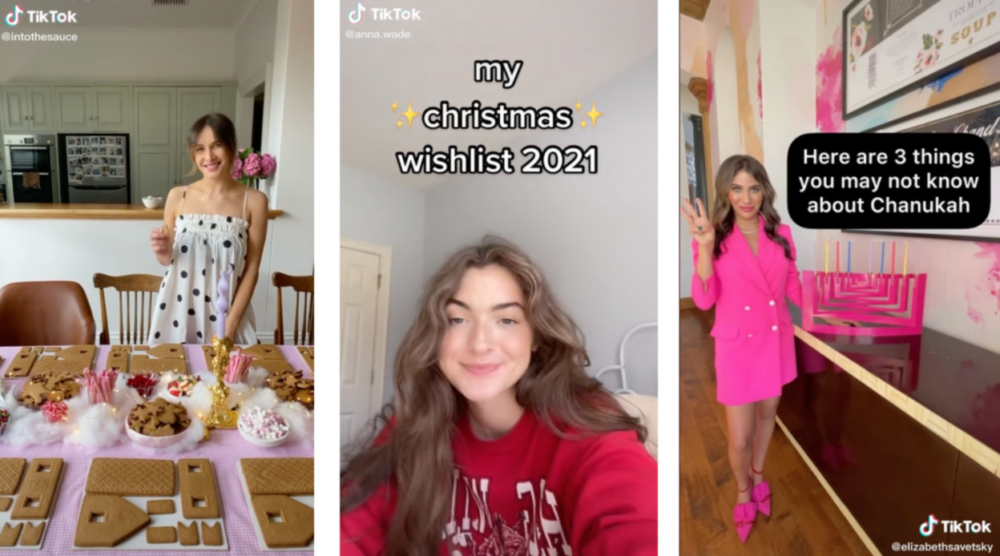 It’s beginning to look a lot like Christmas and Hanukkah on TikTok, and young users are getting in the holiday spirit by sharing how they’re spending the winter holidays. TikTokers are sharing everything from their decked out holiday scapes, to festive beauty inspo, to decor hacks, holiday party ideas, and commemorating the beginning of Hanukkah via #TikTokHolidays. Meanwhile, #ChristmasWishlist2021 counts 90.2M views, serving as the ultimate holiday gift guide for Gen Z and Millennials as TikTokers share the gifts they’re anticipating (some have even organized intricate PowerPoints) and presents they’re gifting loved ones this season. The tag provides a slew of inspiration for holiday shoppers whether they’re looking for gifts for the person who doesn’t want anything, gifts based on specific aesthetics, or ideas for the eco-minded loved ones in their life.  No surprise here, fashion and beauty products are some of the most popular items on young TikTokers’ wishlists, and Nike, Ugg, Alo Yoga, and Glossier are some of the most popular brands circulating users’ wishlists (also, short boot Uggs are in again?). #Hanukkah also trended this month with 167.8M views. Some of the most popular clips are from users sharing where to find the best Hanukkah decor (spoiler alert: it’s Target), kids’ Chanukkah wishlists, and clips educating users on the origin of the holiday. 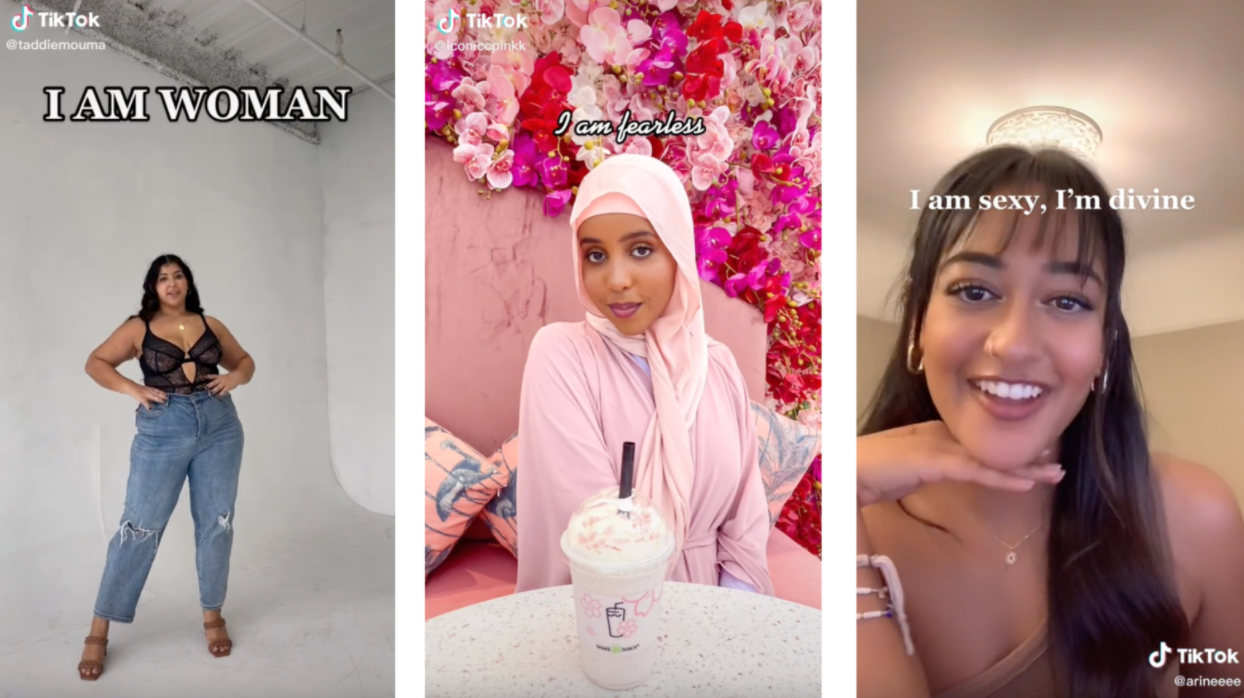 “I am woman, I am fearless, I am sexy, I am divine…”—if you’ve been on TikTok lately, you’ve likely come across this sound tied to the #IAmWoman trend TikTokers are using to share picture montages of when they’ve felt like their best selves. The “I Am Woman” song was created by @emmymelimusic and more than 410K videos have been created using the track. The trend is simple, users share one picture/video where they feel like the lyrics (woman, fearless, sexy, divine…). And while the trend follows a specific outline, users are putting their own spin on it by embracing body positivity, celebrating pics that represent their definition of when they’ve felt their best, and of course, getting their dogs in on the action, too. 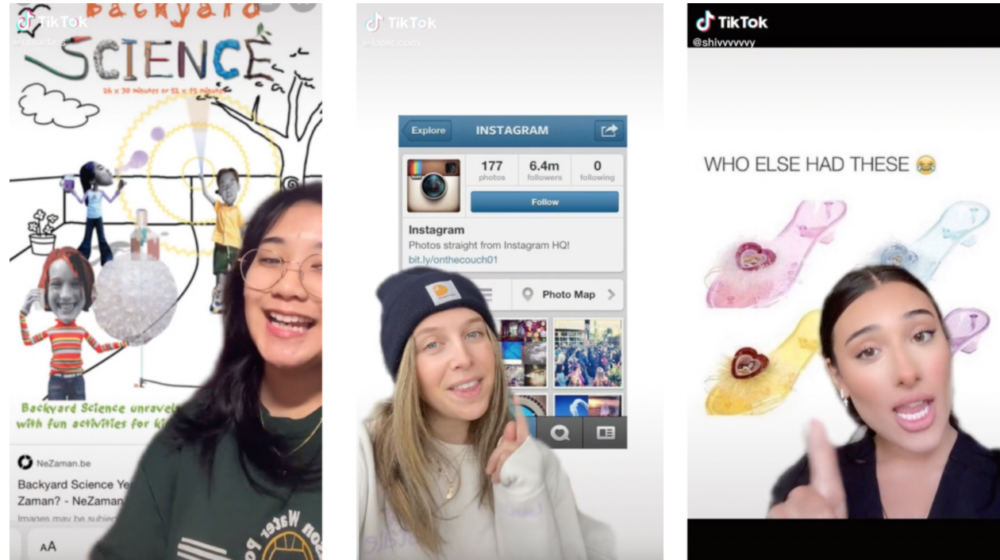 YPulse has told you all about Gen Z and Millennials’ nostalgia for their childhood, and even for decades they weren’t born, in and they’ve been reviving Y2K fashion, flip phones, and TV shows that were created before their time. The #BackintheDay trend is all about this nostalgia as young TikTokers reminisce on the simpler times—like the OG Instagram aesthetic and iconic toys from the ‘90s and ‘00s. Most of the clips under the tag are set to a sound originating from a British rap that actor Kayode Ewumi performed on BBC Radio back in the day (ha, get it?) that starts, “Yo, I’m like, back in the day, you and me baby, we used to have fun,” and nearly 150K videos have been made using the trending track, sharing everything from the food, toys, and PBS shows that sum up their childhood. TikTokers also used the sound in their Thanksgiving-esque clips over the weekend, reminiscing on childhood memories with cousins, hometown friends, and more. If you’ve ever wanted to explore a ‘90s and ‘00s childhood archive, #BackintheDay has you covered thanks to the surplus of content reminding TikTokers of simpler times.

YPulse’s winter holiday plans report found that the majority of 13-39-year-olds will be celebrating the winter holidays with their family or significant others/spouses, and 23% say they will be traveling to visit family / friends. On TikTok, users have been getting in the holiday spirit all month with their loved ones by using the hashtag #FamilyTime, which currently has 12.7 billion views. Videos feature TikTokers doing everything from cooking with their parents to participating in dance challenges to showing off annual holiday traditions. We previously told you that young parents were joining the app using #ParentsofTikTok, so of course, many Millennial parents are also using the #FamilyTime hashtag to to share videos of their adorable (and not-so-adorable) babies and toddlers. We also told you last spring that a surge of parents joined TikTok to dance with their kids during lockdowns, and it’s clear that family content is still massively popular on the app nearly two years later.

#Baking (12.9B views)
It’s no secret that TikTok has become overrun by food and dessert trends, and this month, the #baking hashtag—which currently has a whopping 12.9 billion views—is trending on the app (again) ahead of the holidays. In the weeks leading up to Thanksgiving, videos featuring pies and other fall-esque treats including apple and  pumpkin-themed everything dominated the hashtag, while other holiday-themed desserts like Christmas-three shaped puff pastries and blondies with red and green M&Ms have been popping up. YPulse’s winter holiday plans research found that nearly half of 13-39-year-olds say they plan on baking during the winter holidays—and it’s evident by the #baking hashtag that many of them are already getting into it early. Cooking and baking recipes dominate the app, and brands can continue to learn what food and dessert trends are into, especially during the holidays and special occasions, by following these hashtags during specific seasons.

#WhatATimeToBeAlive (400M views)
While the pandemic has negatively impacted many young people’s mental health and caused many to miss out on milestones, some TikTokers have been using a recent hashtag challenge to instead highlight the positives in their lives. The hashtag #WhatATimeToBeAlive, which currently has over 400 million views, has users sharing an accomplishment or moment in their lives that they’re grateful for while a slowed down version of “Cyber Sex” by Doja Cat (where she sings “what a time to be alive”) plays in the background. In one video, @jackierchu includes the caption “when you realize you’re 22, married after doing long distance, working at your dream company, and bought your first home,” while in another video, @vanniilleegoesto shares “when you realize that are a 22 year old ARMY that has been to 10 BTS concerts in 5 countries and will see them again in less than two weeks.” (For those not in the know, ARMY is the name of the BTS fanbase.) With 2022 just around the corner, and the pandemic nearing two years, it’s clear that young consumers are continuing to look for moments that bring them joy—and this hashtag is just a way for them to share their appreciation for the positive memories in their lives.