Blonde Hair is Cheugy Now & Looking Clean Is In, on The Viral List

Blonde hair is out and rich brunette hues are in according to Gen Z, Hilary Duff has spoken up about her meme-worthy “With Love” choreography, social media users are “yassifying” (a.k.a. FaceTuning) photos of iconic figures, Friendsgiving celebrations are happening again—plus more internet buzz on this week’s Viral List. 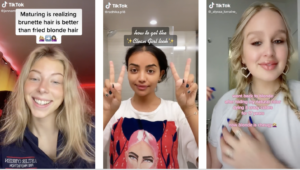 As if the middle versus side part debate wasn’t enough, Gen Z is clapping back at Millennials’ beauty / fashion trends, keeping everyone informed that blonde hair is officially “cheugy” and being an “expensive brunette” is in (sorry to every Millennial out there who has been embracing the blonde balayage). Gigi Hadid, Florence Pugh, and Hailey Bieber have inspired the “movement” after recently ditching their blonde locks for brunette hues. Creative director at Beautystreams, Michael Nolte, tells i-D magazine how shifting away from highly stylized blonde hair could be reflective of how consumers are embracing more diverse beauty ideals: “Thanks to the growing representation of diversity in the media, embracing natural hair colour and texture has become a way to affirm one’s personal background and culture.” According to Nolte, blonde hair isn’t necessarily out of style, but the idea of it being the culmination of American beauty is over. YPulse’s hypothesis is that it’s also being embraced post-pandemic, when visiting the salon for color touch ups became more of a rarity. Young consumers are also prioritizing eco-conscious beauty and body products while realizing that keeping up with expensive coloring appointments isn’t a sustainable (or healthy) hair trend they want to be involved in anymore. Still, there’s a lot of variation people are looking for in their brunette looks—like caramel highlights—signaling that pretty much every hue except cool blonde is in. One TikToker sums the movement up best as she shares her blonde to brunette hair transformation: “Maturing is realizing brunette hair is better than fried blonde hair.” In other beauty news, the “clean look” is the latest take on the “no-makeup, makeup look”—but make it glossy-er. The “clean look” is a combination of having dewy skin, light makeup to subtly enhance one’s natural features, slicked back hair, and some gold jewelry to top it all off. Young people have been popularizing the look on TikTok, with tutorials from users sharing, “how to achieve the clean look.” #CleanLook counts more than 20M views, filled with step-by-step tips for achieving the trend—from the skincare routine, to the best makeup products, and right down to the minimalist outfits channeling “clean look” energy. The “clean look” beauty trend proves that deliberate skincare routines are still a priority for young consumers, and YPulse’s beauty research shows that 65% of Gen Z and 59% of Millennials say they spend more money on skincare than makeup. 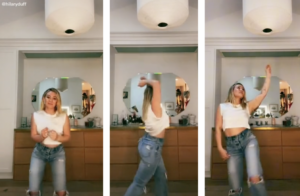 Hilary Duff Revived Her Meme-Worthy “With Love” Choreography from 2007

For years, Hilary Duff’s choreography from her “With Love” performance on The Tonight Show With Jay Leno has been the focus of a viral internet meme for its cookie-cutter, “low-energy” dance moves—a video compilation of all the times Duff has performed the dance exists on YouTube, and it’s a must-watch. TikTokers have been creating memes out of the choreography by dueting clips from Duff’s 2007 performances while putting their own spin on her dance moves. One clip from @yungdaddycack has garnered 1.4M views while another from @denzelcrispy has more than 2M views. Hilary Duff broke her silence on the “With Love” meme dance trend this week in a TikTok dueting @youngdaddycack while dancing to the original moves everyone has come to love (or hate, we’ll let you decide how you feel about Duff’s 2007 choreography). Duff’s TikTok amassed 8M views in three days, and fans are blowing up the comment section: “I HAVE BEEN WAITING FOR THIS,” @overthemoonfaraway commented while @kierabreaugh wrote, “Watching this healed my soul in some way.” #HilaryDuffChallenge has racked up 14.5M views since the trend started earlier this month, giving nostalgic TikTokers (a.k.a. Millennials) a taste of what dreams really are made of.

Yassification, also known as “yassify,” is the process of over-FaceTuning an image to make subjects look plumper, contoured, and stylized to perfection—think the Kardashians, but in cartoon form. The word stems from the phrase, “yaaass queen”—a term originating from the queer BIPOC community involved in 1980s ball culture that went mainstream in 2013 thanks to shows like Broad City (among several other pop culture moments), according to The Huffington Post. Yassification is a play on the phrase as it started as slang and morphed into something many queer people don’t say in real life, and BuzzFeed News reporter David Mack explains, “The meme’s embrace of both camp ridiculousness and vapid emptiness feels reminiscent of the ways parts of queer culture celebrate a sort-of performance of extremes, whether it be over-the-top drag, reclaimed limp wrists, or even language.” @YassifyBot on Twitter popularized the meme after creating several viral posts featuring before and after images of public figures, celebrities, and pop culture icons who have been “yassified” using FaceTune to give them a face lift, plumper lips, and contoured makeup. One of the most viral Yassify memes is an image of Toni Collete’s horrifying scene from Hereditary, morphing from a scream into a front-page model. The meme has made its way to TikTok where users are putting their own spin on “yassifying” scenes from Hereditary along with their own images. #Yassification has garnered more than 15M views on TikTok as users make their own memes playing on the phrase like, “when you accidentally type yaass instead of yes” or, “me before vs after my $7 iced oatmilk latte with lavender syrup.” According to Denver Adams, an art student in Nebraska who’s behind the @YassifyBot account, “[FaceTune] is genuinely used by people. I think there’s a conversation to be had about how unhealthy that culture is,” Adam says. “Technology like this has a creepy way of making it so uncannily realistic that it makes people uncomfortable. [Yassification] is making light of that problem.” It’s satire, according to the Yassify Bot, and Adams hopes the meme entertains people by embracing the ridiculousness of FaceTune. 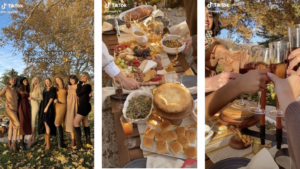 Friendsgiving Is Happening This Year

As Gen Z and Millennials (slowly) start welcoming back their pre-COVID holiday traditions, young people are sharing their #Friendsgiving celebrations on TikTok. #Friendsgiving counts 2.2B views on TikTok, and is filled with clips from young users sharing montages of their celebrations, decor and food recommendations, step-by-step recipe prep, and sharing what dishes they’re bringing to the table (some are even making games out of it like bringing a dish that starts with the first letter of their name—or this WAP-themed dinner). One of the most popular video trends is, “Tell your friends to show up at 7:00 and see what time they actually come”—spoiler alert, showing up on time just isn’t in the cards for some. YPulse’s Thanksgiving research shows that 29% of Gen Z and 37% of Millennials are celebrating Friendsgiving this year (compared to 18% of Gen Z and 26% of Millennials in 2020), signaling that young people are soaking up every minute of this time honored tradition as they gain some sense of normalcy this holiday season.

Six years after her last album, Adele’s “30” is officially here.

iHeart Radio has vowed to only play “Taylor’s Version” of songs on its radio stations from now on, following another successful re-recorded album from Taylor Swift.

A former Wendy’s employee is going viral on TikTok for a video documenting why him and several more workers are quitting—the video has garnered more than 1M views in just a few days.

A Princess Diana Facebook fan group is blowing up as Gen Z pokes fun at how older generations interact in groups on the platform.

Steve from Blue’s Clues joined TikTok, and his clips are already racking up millions of views from Gen Z and Millennial fans.

The Old Gays on TikTok are getting their own TV show after consistently going viral for videos about their lives together and their unique perspectives on pop culture.

Marvel dropped the first full-length trailer for Spider-Man: No Way Home—and fans can’t stop talking about it on Twitter.

Meanwhile, some Marvel fans aren’t so thrilled about the company’s tie-in with Boss Beauties NFTs.

Billie Eilish is returning to SNL next month as both host and musical guest.

Snoop Dogg served orders at an Arkansas Raising Cane’s to promote his new album—and local residents can’t stop talking about it on TikTok.

Hulu’s The D’Amelio Show has reportedly been renewed for a second season.

MrBeast’s upcoming Squid Game project is facing some initial backlash over how much money has been spent on the production.

In other Squid Game news, Chrissy Teigen hosted a themed-party based off the hit show, which is also facing backlash over how “tone-deaf” it is.