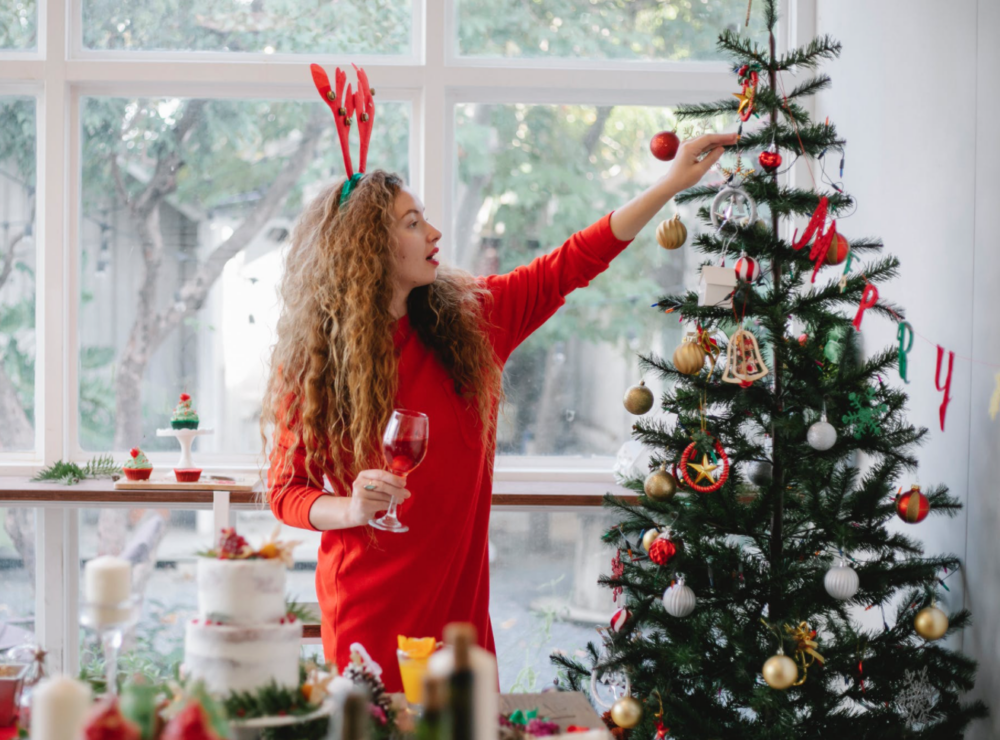 Holiday marketing and sales have been coming out earlier than ever. But these three stats show that young consumers might not mind…

For years, people have debated how early is too early to celebrate the holidays, while marketing experts have discussed the dangers of “holiday creep.” The phrase refers to the “retail phenomenon” of stores promoting Christmas and other winter holiday merchandise early. The New York Times reported that it “elbowed” its way past Halloween this year as some skipped spooky season altogether to get ready for winter celebrations instead.

Retailers, including upscale boutiques and discount shops, have been spotted transforming their stores into “winter wonderlands”: Nordstrom unveiled a Christmas tree display in most of its stores in early October, about “one to two weeks earlier than last year,” Bloomingdale’s moved its virtual holiday events to late October, rather than November as it did last year. Lowe’s also set up stores for Christmas a week earlier than usual. Major retailers like Target, Ulta Beauty, Walmart, and Amazon began rolling out their Black Friday deals as early as October, while others released their toy guides early to target Millennial parents looking for the hottest toys to get their kids this season.

Obviously, to retailers and brands the extension of the holiday season is an opportunity for more sales and promotions. At the same time, fears that early holiday marketing will annoy and repel consumers have long been a concern. However, three stats from our winter holiday plans behavioral survey show that brands shouldn’t worry too much about leaning into the “holiday creep”: 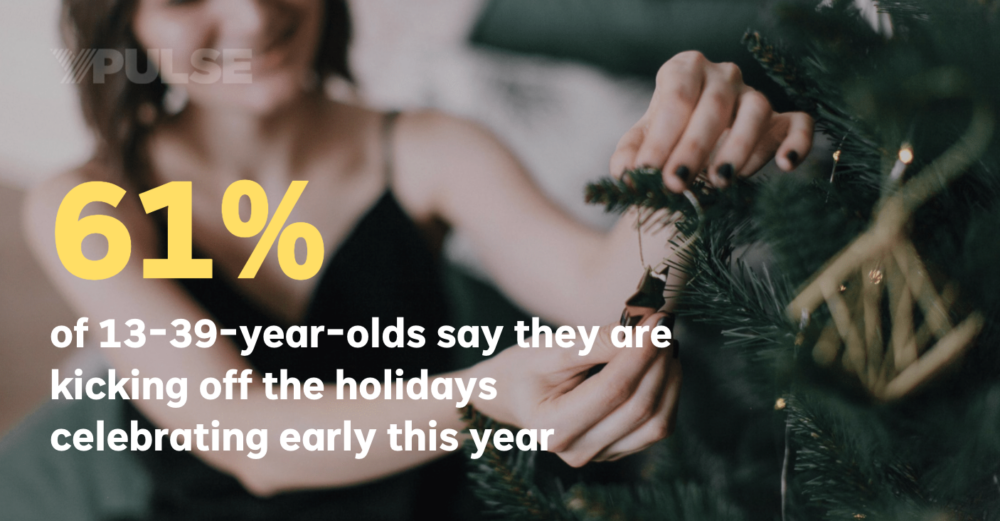 The majority of young consumers are celebrating the holidays early.
We told you last year that young consumers were celebrating the holidays early both online and IRL because of the pandemic—and that certainly seems to be the case again in 2021 as well. Sixty-one percent of 13-39-year-olds say they are going to kick off the holiday celebrating early this year, and another 61% say they want to start celebrating the holidays earlier than usual to have something positive to focus on. And that means decorating early too: The majority tell us they are going to put more effort into decorating their house / space for the holidays this year. Meanwhile, a YouGov survey found that among those who celebrate Christmas, Hanukkah, and Kwanzaa in the U.S., 72% decorate the inside of their homes, while 43% decorate the outside—and approximately 80% reported that they typically put their decor up before December 1. One psychologist says decorating earlier, especially outdoor decorating, “connects you to your community,” while another psychologist told UNILAD: “In a world full of stress and anxiety people like to associate to things that make them happy and Christmas decorations evoke those strong feelings of the childhood.” TikTokers celebrated the holidays as early as the summertime last year. But this year, there’s proof that young people are celebrating the holidays early again: On TikTok, the hashtags #tiktokholidays (86.7 million views) and #christmas2021 (987.4 million views) have been trending on the app since the beginning of November, and memes have been flooding social media early as young users, celebrities, and brands get into the holiday spirit earlier as well. On November 1, actor Devon Sawa tweeted “Good morning everyone, happy November first and merry Christmas!!,” while Target—which has already been hanging decorations at various locations—tweeted “If ur not listening to Christmas music today, ur the Grinch.” And speaking of retailers… 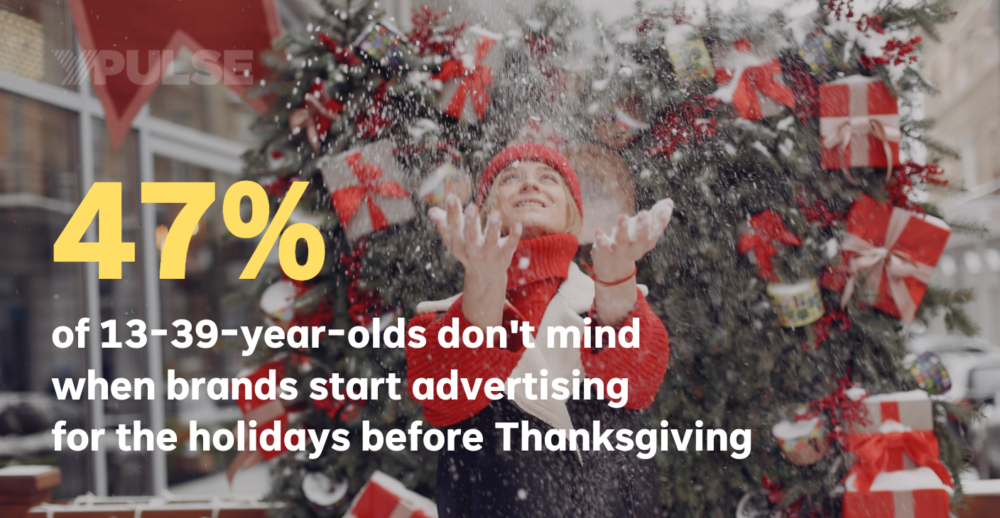 Nearly half of young consumers actually don’t mind seeing holiday ads before Thanksgiving.
As young consumers start getting into the holiday spirit early, brands have been meeting them halfway to share the excitement by releasing ads before people have even had their Thanksgiving dinner—and they don’t seem to mind it. Forty-seven percent of 13-39-year-olds disagree with the statement “I don’t like when brands start advertising for the holidays before Thanksgiving.” This year, brands all over the world got on top of launching their campaigns before Halloween. In the U.K., online retailer Very dropped a holiday ad on the first of October that featured a family decorating their house with Christmas lights and a singing rendition of “Holly Jolly Christmas,” only to be interrupted by trick-or-treaters, who appeared dismayed when they’re handed Christmas cookies instead. We also told you how companies’ holiday marketing and advertising seems to be full of more “hopeful and joyful optimism” this year—including Amazon and Gap whose campaigns emphasize love, kindness, and the importance of coming together and celebrating with loved ones during this time. Of course, the strategy to drop holiday-themed campaigns and ads earlier likely has to do with the fact that brands and retailers are also encouraging customers to shop as early as possible to avoid the dreaded shipping delays—especially since more than half of young shoppers tell us they are worried COVID-19 will make it hard to shop for the presents they want to give. As mentioned, major retailers like Target, Ulta Beauty, Walmart, and Amazon began rolling out their Black Friday deals as early as October, while others released their toy guides early to target Millennial parents looking for the hottest toys to get their kids this season. And TikTokers have been unveiling their holiday wish lists early on the app, which is quickly becoming a go-to resource for discovering the most-desired gifts this season. The hashtags #ChristmasWishList2021 and #ChristmasList2021 has 74 million and 17 million views, respectively, featuring montage clips from users sharing this year’s hottest products—and some of the top posts under the tags feature products from Converse, Jordan, Lululemon, Ugg, and Alo Yoga. 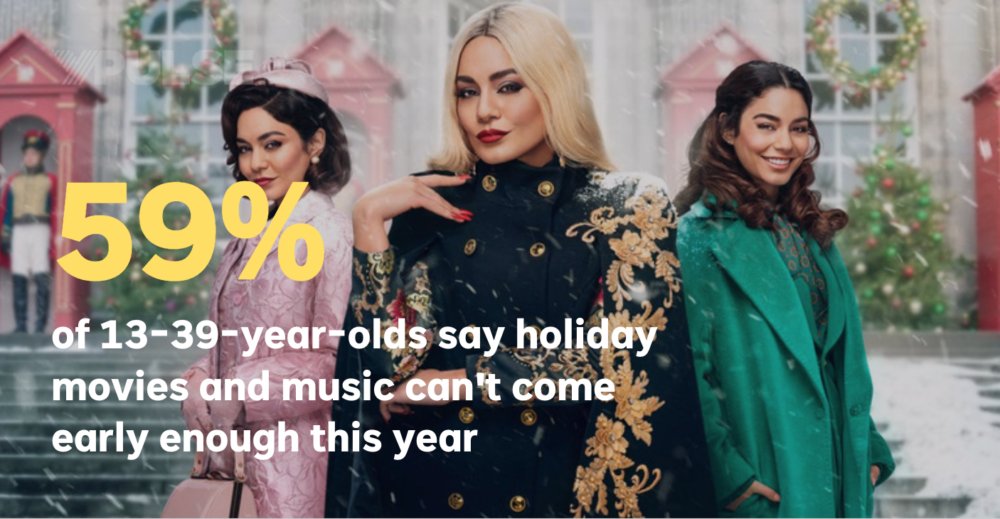 More than half of young consumers want holiday movies and music to come out early this year.
Of course, in the midst of all the early decorating and early ads, young consumers also want holiday movies and music to come earlier this year too, with 59% of 13-39-year-olds saying holiday movies and music can’t come early enough. We’ve told you that made-for-TV holiday movies are some of young consumers’ favorites—and cable networks and streaming services are certainly making more, and putting them out earlier, to answer the demand. The Hallmark Channel started airing holiday movies on their channel at the beginning of November, and Netflix unveiled their holiday movie list at the beginning of October—and young fans are clearly taking the bait. One of the first movies Netflix released to kick off the holiday season was romcom Love Hard, starring Nina Dobrev, Jimmy O. Yang, Never Have I Ever’s Darren Barnet, and Harry Shum Jr., on November 5th—and it quickly became Netflix’s most watched movie that week. The third installment of the Vanessa Hudgens-led The Princess Switch premiered last week and has also quickly risen to the top of the streaming service’s most watched movies. Fans have even been already showing their excitement for a Netflix holiday romcom starring Lindsay Lohan that’s not expected to come out until next year, so it’s safe to say that young consumers love their holiday movies early. Meanwhile, they’re just excited about holiday music. SiriusXM announced that they launched its Christmas channels at the beginning of the month. Music artists are also teasing their music early: On November 1, Mariah Carey shared a video of herself on Instagram (that garnered more than one million views) wearing a red, holiday-themed dress crushing pumpkins that read “It’s Not Time Yet” with the caption “It’s Time!!!!” clearly teasing her holiday mega-hit “All I Want For Christmas Is You.” TikTok-famous band The Band McMillian released the holiday song “Single Bells” at the end of October, and it has been sitting at the top of the iTunes chart ever since, while Ariana Grande’s “Santa Tell Me” recently re-entered Spotify’s top charts, proving that young consumers really are getting into the holiday spirit earlier than ever this year. 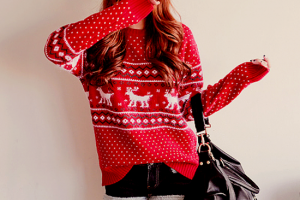