Virtual concerts aren’t going away, even as in-person events pick up—here’s how the trend is growing…

Virtual concerts took over 2020—for obvious reasons. In lieu of in-person events, celebrities and brands alike found ways to reach their young fans digitally, thanks to livestreaming tools and online platforms. Following vaccines, the concert industry initially hoped that this summer would be the season where live music would rebound. Some festivals have made in-person events possible more recently by implementing safety protocols, like wearing masks, social distancing, or presenting their vaccine cards or negative tests. And it’s clear that young people are hungry for these experiences. YPulse data shows concerts are 4th on the ranking of in-person experiences they’re excited to get back to and the number who say they’re comfortable going to in-person concerts was increasing back in June. In early August, Lollapalooza held an in-person festival after having gone virtual in 2020—and fans turned out in droves. Vaccine or a negative COVID test proof was required to enter, and roughly 100K people attended, making it one of the biggest public events since COVID started.

But despite that success, in-person events aren’t quite “back” in full swing. New concerns of surging COVID-19 cases and the Delta variant have emerged, causing newfound anxiety—and “whiplash” to the live music industry. Virus outbreaks and outdoor transmission have already been tied to some crowded music festivals like Oregon’s Pendleton Whisky Music Fest, Michigan’s Faster Horses Festival, and, yes, even Chicago’s Lollapalooza. Because of this, artists have begun cancelling tours and concerts for the remainder of the year, and music festivals in areas with high infection rates have been postponed or cancelled altogether. The news has certainly caused confusion and chaos on how the industry needs to proceed, but of course, that doesn’t mean that it’s an end all for the music world. Virtual concerts are continuing to trend, with millions attending to watch their favorite artists in metaverses and other digital spaces. Last year, we told you how virtual shows inside video games were forging new ground, and gaming platforms from Fortnite to Minecraft to Roblox have found ways to adapt to the ongoing pandemic and keep live music performances alive by tapping musicians for virtual events. YPulse’s 2020 music report found that 48% of 13-39-year-olds have livestreamed an online concert, and our upcoming Future of Experiences trend research shows 27% of Gen Z are interested in attending a concert in a video game.

While in-person events will absolutely have a comeback, that doesn’t mean that the trend of virtual concerts will be going away. COVID, as with so many things, accelerated a behavior that Gen Z and Millennials are now seeing as a norm—and will expect to be able to continue going forward. And brands, platforms, and artists, are contributing to the trend as well. Here are just four recent examples: 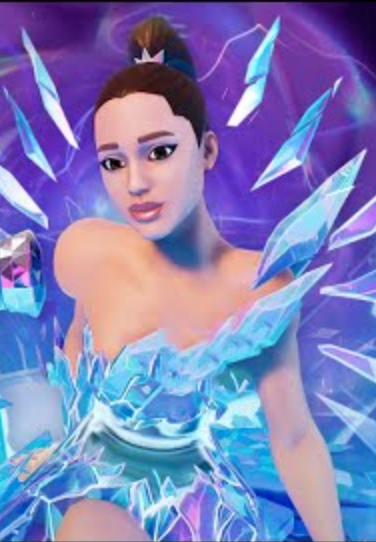 Fortnite’s Ariana Grande Rift Tour
In 2020, Travis Scott and Marshmello hosted successful metaverse concerts in Fortnite, and the platform has continued to host artists as avatars for players to watch. In fact, 12 million attended Scott’s concert, breaking records. Now the gaming platform has tapped another one of Gen Z and Millennials’ favorite pop stars kicking off a five-show event with Ariana Grande in early August. According to Epic Games, “players will be able to travel side by side with their friends on a journey to magical realities where Fortnite and Ariana collide.” While attendance metrics haven’t been released, the teaser trailer for the event alone has been viewed over 4 million times and the full event video has been viewed over 1 million. Billboard also reported that Grande’s songs saw streaming spikes after the concert. Grande (of course) got her own skin that players were able to purchase and wear to the concert as part of the game’s Icon Series that LeBron James and Tyler “Ninja” Blevins have also been a part of. And players who subscribed to the Fortnite Crew subscription scored exclusive bonuses for attending. Video game concerts transformed music marketing because of the pandemic, and with headliners like Grande, the trend likely isn’t going anywhere post-COVID. 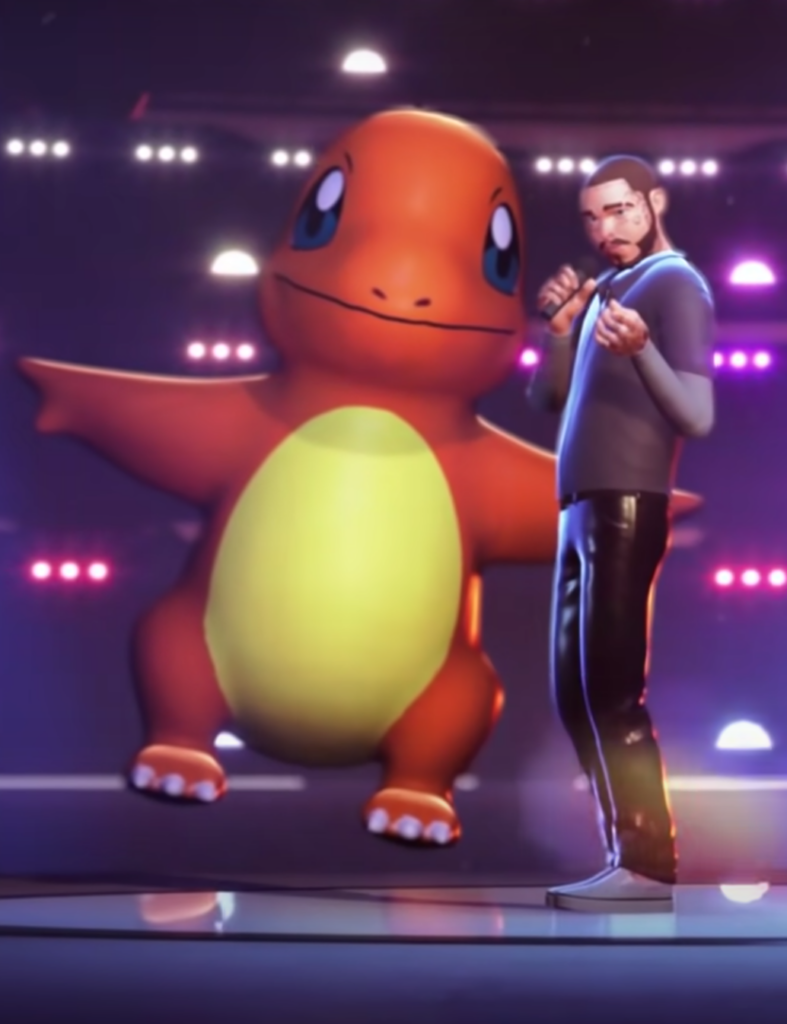 Animal Crossing, Fortnite, Roblox, and Minecraft aren’t the only popular video games hosting their own virtual concerts. In honor of their 25th anniversary, Pokémon put together special Blue and Red albums featuring songs from J Balvin, Vince Staples, Cyn & Zhu, and many others. But perhaps one of the biggest events they planned for the anniversary is a virtual concert with Post Malone as the headliner. The rapper starred in a free virtual concert on the event’s office site as well as YouTube and Twitch. The initial teaser for the show on YouTube showed him as “a very Pixar-ish, animated version” of himself. The actual concert, which currently has over three million views on YouTube, featured the cartoon version of Post Malone being transformed to various settings of the video game, and performing among popular Pokémon beloved characters like Charzard, Squirtle, and of course, Pikachu. As part of the celebration, the company also announced P25, a series of musical events with Katy Perry as the headliner—which included a performance of her new, original song “Electric” written especially for the anniversary. 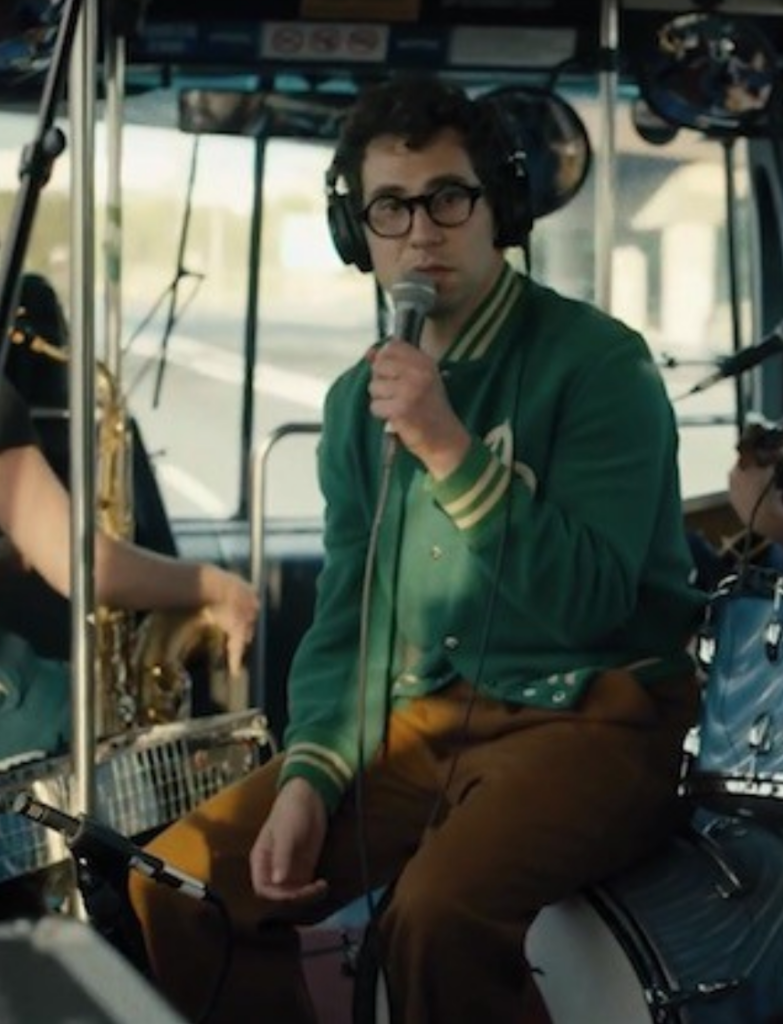 YPulse’s Music report found that 48% of 13-39-year-olds say they regularly listen to music on Spotify, while 30% say it’s their favorite platform. So, of course, one of young listeners’ favorite streaming platforms have tried to come up with ways to reach them—and revive the live-music scene to engage with concert-goers who haven’t been able to attend live music events the past year. This summer, the platform launched a new feature “designed to provide a live-show experience remotely,” and kicked off a virtual concert series. The pre-recorded shows include performances from The Black Keys, Rag’n’Bone Man, Jack Antonoff, Leon Bridges, and girl in red. The musicians and bands put their own creative spin on where they performed, with The Black Keys keeping it classic at a traditional music venue and Jack Antonoff performing with his band BLEACHERS on a bus traveling from Brooklyn to Asbury Park, New Jersey (a.k.a Bruce Springsteen’s old stomping grounds). Shows ran for 40-75 minutes and it cost $15 for Spotify users, giving fans an “intimate” music-listening experience. With YPulse’s media consumption data showing a six point increase in interest for at-home entertainment post-COVID, it’s clear that livestreamed music experiences similar to the ones Spotify hosted will have a life going forward. 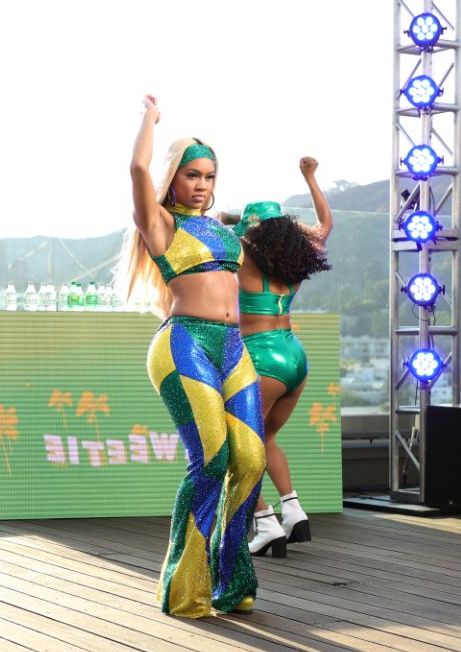 Sprite’s Live From The Label
Food and bev brands got into the live music fun too: This summer, Coca-Cola’s Sprite brand hosted “Live From The Label,” a livestreamed concert series, which is an extension of their “Thirst for Yours” platform that celebrates the brand’s 35-year connection to hip-hop culture. Special 20-ounce bottles with QR codes unlocked access to virtual concerts with replays and merch giveaways. The “Stage 1” bottle served as a “ticket” to a virtual concert featuring Latto, “Stage 2” featured Saweetie, and the final concert this month featured “What’s Poppin’” rapper Jack Harlow. Opening acts for each headliner were selected from a shortlist from the Sprite Way social platform. The concert series was promoted with a “robust” social media program, along with outdoor, retail, streaming audio and local radio elements. In the last year, food and bev brands have come up with unique ways to connect with fans beyond just their edible and drinkable products, like making merch,  and getting into the virtual concert space is just another way they’re continuing to stay relevant with a younger customer base.

YPulse Business users can access the full Music behavioral report and data here, and will have access to the Future of Experiences trend report 9/2.

North America
Gen Z & Millennials Aren’t Turning to Experts for Wellness Information
Wellness professionals aren’t at the top of their list for wellness information any...
North America
3 Kinds of Brand Experiences Young People Are Having in The Metaverse
Brand experiences in the Metaverse are continuing to evolve… TL;DR The ...
North America
Young People Are Seriously Done With Facebook on The Viral List
TL;DR Facebook is in hot water with already waning young users for supplyi...