YPulse is carefully monitoring COVID-19’s impact on young consumers and how brands can respond. We’ll be providing new data and insights for you weekly to cope with the crisis, including special reports, exclusive data on Coronavirus and the next generations, and actionable insights on what brands need to be doing now.

You can access everything here on our young consumers and COVID-19 hub.

As Hollywood gets upended by the COVID-19 crisis, musicians and comedians have turned to digital platforms to keep their fans entertained…

From the halted productions of TV shows and films to news of celebrities contracting COVID-19, the pandemic has rocked the entertainment world.

Not all of the celebrity reactions to Coronavirus have resonated. Messages from high-profile celebrities and influencers have included a lot of misses, with some criticizing privileged stars for getting tested for COVID-19 without having symptoms, or chronicling actions that flout quarantine. Some efforts, like the much-maligned, star-studded “Imagine” cover posted by Gal Gadot on Instagram, have gone viral for being out of touch and tone deaf. For some, social media-aired glimpses into the quarantine lives of celebrities are highlighting stark differences between have and have nots during a time when more and more are defining themselves as the latter—and it’s stirring up conflict. As The New York Times pointed out, staying inside a giant mansion is not the same kind of sacrifice that many less fortunate young consumers are making these days.

But not all attempts to reach out to fans have been (very public) fails—celebs and Millennial and Gen Z-favorites like Justin Bieber, Ariana Grande, and Taylor Swift have strongly advocated for their fans to practice social distancing to help mitigate the spread of the virus with messages that didn’t include their ginormous mansions. Those who are actively helping to fight COVID-19 are being applauded: Lizzo donated meals to frontline medical workers across the country, and Kylie Jenner is partnering with Coty Inc. to donate hand sanitizer to hospitals in SoCal. And young consumers aren’t rejecting celebrity en mass. Before the pandemic, we wrote about how celebrities have been using apps like Community and Cameo to directly chat with followers—and not surprisingly, both the apps have surged in popularity as more of them jump on the service to combat boredom during self-quarantine, while finding different ways to communicate with their followers. Young celebrities like Noah Centino have been using Community give out their “phone numbers” on social media, and connect with quarantined fans.

There is one thing that they absolutely want right now: entertainment. Our exclusive COVID-19 research found that over half of 13-39-year-olds are watching TV or video content more during Coronavirus quarantines, and it’s clear that everyone is looking for happy distractions. Celebrities, artists, and comedians are absolutely providing them, and potentially creating a new normal for entertainment. Celebs are taking to social media to keep their fans entertained, using livestreaming in new ways, and even reinventing what TV looks like. Here are the (non-cringey) ways celebs are reaching young consumers during a time of self-isolation and crisis: 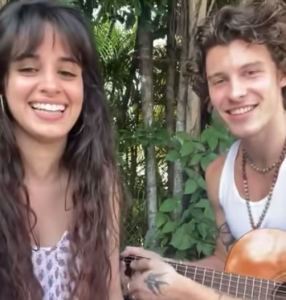 With the news of SXSW getting cancelled, and Coachella and Stagecoach being postponed as well as other musicians rescheduling tours, many big name musicians and indie artists are finding themselves without a stage to perform on. More well-known musicians like Shawn Mendes and Camilla Cabello, Coldplay, and John Legend have partnered with Global Citizen and used Instagram to host virtual concerts with the hashtag #TogetherAtHome, while more indie artists have been choosing to go on Twitch or other lesser known services like Stageit and Gimme Radio. Singers like JoJo have even taken to TikTok to remix old hit songs to encourage social distancing. Musicians like Dave Matthews and Elton John have even begun partnering with Verizon and iHeartMedia to livestream charitable concerts (with performances from Billie Eilish to ‘90s boy band Backstreet Boys) to entertain while also giving back to Coronavirus relief efforts. 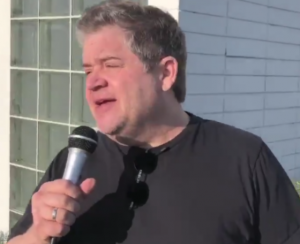 Many up-and-coming comedians rely on open mics and comedy clubs to be able to perform stand up, but with many venues across the country temporarily shuttering, many emerging talents have turned to Instagram and Zoom to host shows and sell digital tickets. Some comedy club owners have even invited emerging comedians to perform to an empty room and separately livestream their sets on Instagram. To keep things organized, comedians are using Google Docs as a space where performers can write down jokes or figure out who’s going next. Even seasoned comedians like Patton Oswalt and Maria Bamford have been utilizing Twitter and Zoom to perform stand up. 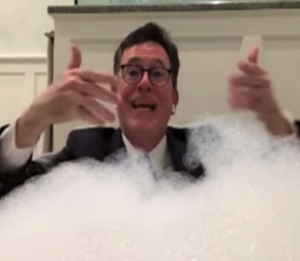 For many late night TV hosts, the show must go on even as they adjust to the “work from home” life in the midst of their studios postponing their regular in-studio shows. Stephen Colbert, Jimmy Kimmel, and Jimmy Fallon have all filmed themselves either in the bathtub or their own rooms—and in some cases: they’ve even employed the help of their children and spouses to create makeshift intro cards and operate the “camera.” Trevor Noah, who has been a big part of Viacom’s #AloneTogether campaign, has been sharing videos of himself cleaning, working out, singing on the balcony, and even launched The Daily Social Distancing Show from the comfort of his own couch. Conan O’Brien said he was going to continue airing his late night show on TBS without an audience, but instead filmed on his iPhone and while guest interviews via video chat. Even Andy Cohen of Watch What Happens Live will broadcast out of his apartment despite testing positive for COVID-19. 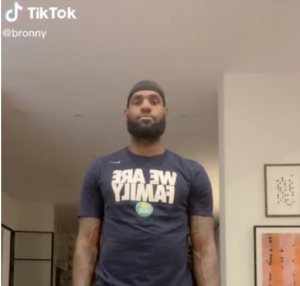 With the rest of the NBA season suspended (and other major sporting events) after some players contracted the virus, many basketball stars who are currently on hiatus have been creating TikTok content to connect with young sports fans. Los Angeles Lakers power forward LeBron James—who has 2.4 million followers—filmed him and his family (a.k.a #JamesGang) doing various dance challenges, while Philadelphia 76 player Matisse Thybulle has been making regular videos on the app—garnering 63.3K followers since on hiatus. Even baseball players like Mike Trout, who are now facing a delayed spring training, are getting on the app popular with Gen Z. We previously wrote about how #NBAMoments is a popular hashtag on there so it’s the perfect place for players to connect with fans.

Western Europe
4 Brands Tapping TikTok to Reach Young Europeans
Having a TikTok marketing strategy is a must for brands trying to reach young Europ...
North America
You Got #Krissed is One of the Top Trending Hashtags This Month
According to Gen Z, trends start on TikTok first before spreading to other platform...
Western Europe
Young Europeans Say These Are Their 15 Favorite American Brands
American culture has infiltrated young Europeans’ lives—and that includes American ...