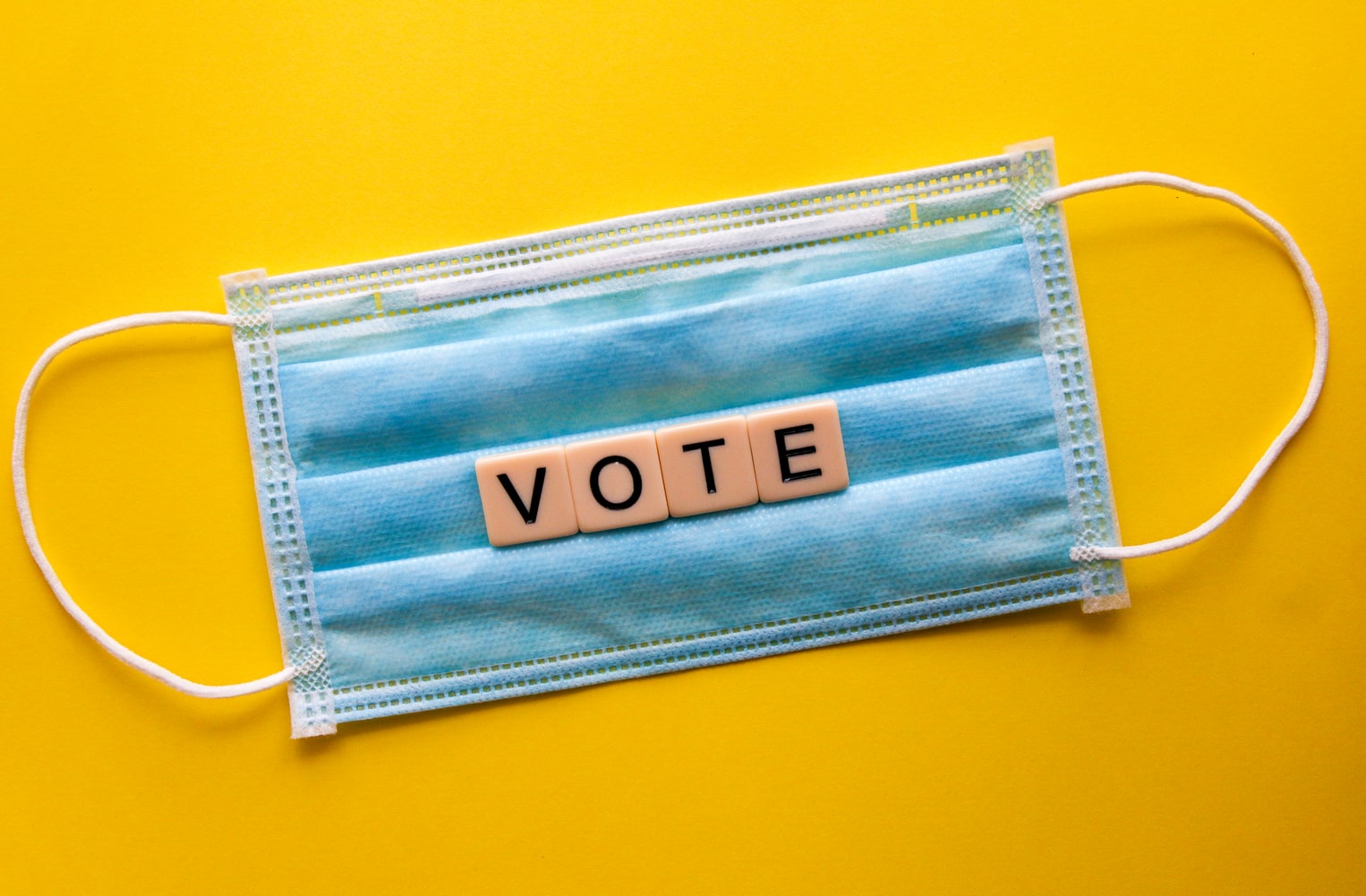 In the first presidential election for many Gen Z voters, they’re getting creative to encourage their peers to get to the polls…

The election is next week, and many Gen Zs will be voting for the first time. According to a Harvard University survey, 63% of 18-29-year-olds are “definitely” voting in this year’s election—an increase from 47% in 2016. A poll from non-partisan research center CIRCLE reported that over three million young people in the U.S. have already cast their ballots for the election, and that two million of those ballots have been cast in states where “the youth vote could very well dictate the outcome of the election.” YPulse’s Not Waiting on the World to Change report found that 71% 18-24-year-olds plan to vote in the election with a majority leaning Democratic.

YPulse also found that 75% of 13-39-year-olds like when brands encourage consumers to vote, and the social platforms that Gen Z spends their time on have been encouraging registration and voting. Snapchat registered one million voters, 65% of which were Gen Z. In the last few months, they teamed up with TurboVote to launch voting tools to make it easier for users to register or check their registration status. They also rolled out PSAs and original content to get young voters amped up for the election season. Meanwhile, TikTok jumped on “the voter registration bandwagon” by rolling out a U.S. elections guide providing voter registration and election information from sources such as BallotReady and SignVote. They announced that they will be adding more resources to the guide on Election Day including live results from reputable news publications like Associated Press. Even celebrities and mega-influencers like Kylie Jenner are encouraging Gen Z to vote. A “thrist trap” she posted on Instagram earlier this month led to a 1500% increase in voter registration on Vote.org.

But Gen Z is also taking it on themselves to rallying their peers to the polls. We told you how this generation has been transforming digital activism, and armed with a plethora of digital tools, they’ve been finding new, creative, and very Gen Z ways to raise voting awareness ahead of the election. Here are four ways Gen Z is showing support for their favorite candidates and galvanizing voters to mail in their ballots and take to the polls: 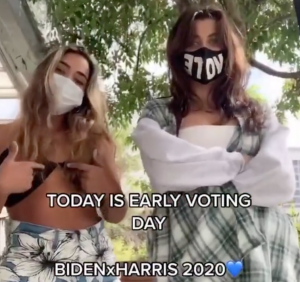 TikTok houses, or content creator collectives, aren’t a new concept. Many teens follow them to keep track of viral challenges and trends. But in a year where a groundbreaking election is set to take place, more creator collectives are popping up to send out a different type of message to their followers—to get out and vote. On TikTok, the hashtag #Biden2020 has 4.5 billion views, while #Trump2020 has 13.7 billion views. The hashtag #genzvotes has 2.3 million views. The account Tok the Vote has the goal of “making youth voting go viral” with videos featuring a mashup of Missy Elliot’s track “WTF” to Michelle Obama’s voice saying “vote.” But TikTok collectives dedicated to political parties and voting are also trending. There’s Conservative Hype House (which has 1.5 million followers) who have “turned the viewpoints of right-wing Gen Zers into a meme machine.” There’s also the Democrat Hype House with just over 192,000 followers, as well as The Republican Hype House and The Liberal Hype House. Most recently The House of US was created in part by the PAC 99 Problems. Unlike other TikTok houses, they are completely virtual and are “dedicated to driving progressive Gen Z voters to the polls,” and to mobilize voters to support Joe Biden and Kamala Harris. The house is composed of popular TikTokers @Thereal_tati, @king.science, @nataliaseth, @samvicchiollo, @itsjustaba, @vaggianna3, @maya2960 and @alexsey—all of which have thousands and millions of followers each. Meanwhile, “TikTok for Biden” is a group formed by Aidan and Brendan Radecki, and includes 350 creators and stars (who have a collective following of 150 million users), who are raising money, phone banking, and holding events to help elect Biden and Harris. Many members and supporters distinguish themselves on the platform with their logo, which reads “Gen Z for Biden.” 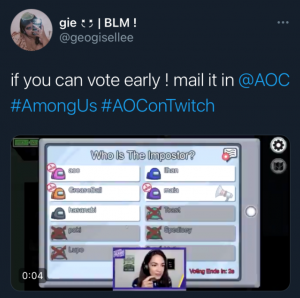 YPulse’s media consumption report found that 60% of 13-18-year-olds started playing a new mobile or video game during quarantine. Last week, Rep. Alexandra Ocasio-Cortez hosted a livestream of Among Us in an effort to reach that demographic, which ended up being the largest stream ever on Twitch. Beyond just wanting to play the massively popular video game, AOC did it in a bid to reach voters ahead of the election—and of course, reaching young voters on the platform. During the event, she was joined by Rep. Ilhan Omar as well as top gaming streamers Imane “Pokimane” Anys, Hasan “Hasanbi” Piker, and Ali “Myth” Kabbani—and 430,000 viewers tuned in. While the stream was for the most part “largely free” of political commentary, she did end the game telling young viewers: “Please again make sure you register to vote, make your plan to vote.” According to one games industry analyst, they felt like AOC’s move to get on Twitch was “a very smart way to raise voting awareness pre-election, especially amongst the notoriously hard-to-reach Gen Z.” The reach was so big that it t”raveled past the boundaries of Twitch itself,” and memes were instantly created by young users across every platform including Twitter, TikTok, and Reddit. Many users on those platforms re-shared clips from AOC’s livestream with captions encouraging their followers to vote. Among Us also isn’t the first video game she’s used to reach young gamers: Earlier this year, she was very into Animal Crossing: New Horizons and paid visits to other players. The Nintendo game, which has become a huge marketing platform for celebrities and brands, have caught the attention of other politicians as well. Joe Biden and Kamala Harris have their own island, which offers virtual merch, signs, and general information for voters to learn about their campaign. 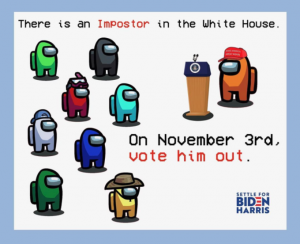 Earlier this year, presidential hopeful Mike Bloomberg went viral for his meta memes ads, which were created by the group Meme 2020—and they’re still working on using Gen Z’s second language to get out the vote. For the last several months, they’ve been working on another meme-focused campaign: “preventing the re-election of President Donald Trump.” At the end of July, they began rolling out content across “dozens of popular Instagram meme pages.” One of the memes, which was aimed at registering voters in Florida, shows a mail-in ballot application for the state on a phone screen. The top shows an incoming text from a contact named “F.B.I Agent” asking, “You know Joe Exotic isn’t on the ballot, right?” A similar meme featured a New York State mail-in ballot with the same format with a “text” from F.B.I agent reading, “This is the most productive you’ve been in four months. Keep it up.” Meanwhile, the Instagram group Settle for Biden (made up of mostly former Bernie Sanders and Elizabeth Warren supporters), known for posting memes about Biden as well as its (jokingly) lukewarm support toward the candidate, has decided to “go all in” for the candidate in order to “push young voters and progressives to the polls.” 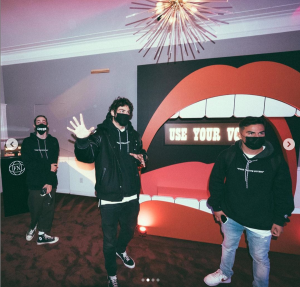 This year, To All The Boys star Noah Centineo launched lifestyle brand Favored Nations to mobilize Gen Z philanthropy—starting with Black Lives Matter. Co-founded by Centineo and his friend Josh Heller, the brand describes itself as a collective of young activists “who give a shit” about today’s social and environmental issues. So of course they’re also tackling the election. The brand has created a “voting-focused pop-up gallery” in Los Angeles in a “last-ditch effort to get Gen Z to the polls.” To visit, Centineo is taking appointments as a way for guests to safely tour the gallery. While the gallery features neon slogans that tout phrases like “use your voice” or “f*ck this i’m voting,” it was also developed as a way to educate and inspire influencers to vote and speak out on big issues. YPulse’s influencers & celebrities report found that 64% of 13-39-year-olds believe that celebrities have a responsibility to share their views and causes with their followers—which is what Centineo and Heller are pushing for, strategically placing the pop-up right across from influencer hot spot BOA Steakhouse. So far, they’ve gotten visits from Kylie Jenner (whose viral “thrist trap” led to a surge of voter registrations) and TikTok stars Larray and Stassiebaby, who have posted content about the pop-up on their social channels. In recent months, influencers have stopped being apolitical and have spoken up about voting in the election. Centineo, who didn’t vote in 2016, told the NYTimes that he “understands the apathy many young people feel toward the political system.” But after educating himself more on the political process, he is making up for it through his organization.