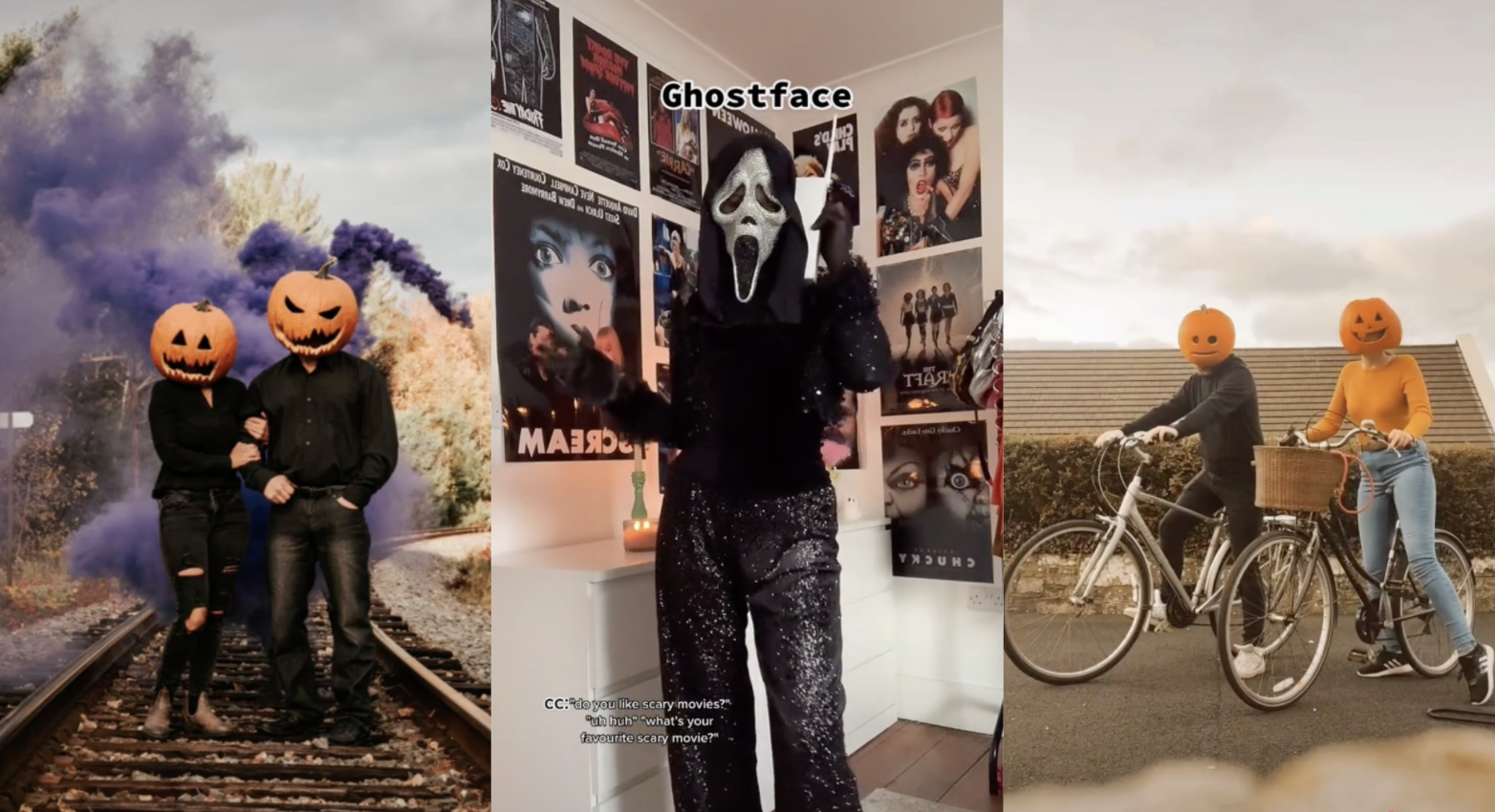 Young people are getting in the spooky spirit with pumpkin head photoshoots, a Scream-inspired Ghostface cult is circulating TikTok, a 2002 song by the Mountain Goats is finding a new audience on TikTok, Prada’s Bucket Hat Challenge is stirring all kinds of reactions—plus more internet buzz on this week’s Viral List! 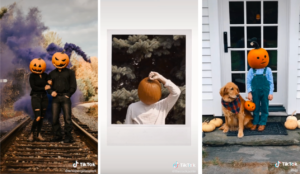 Pumpkin Head Photoshoots Are All Over TikTok

Topping last year’s #GhostPhotoshoot, young people are getting in the Halloween spirit by not just carving pumpkins, but wearing them for some spooky season photoshoots. #PumpkinPhotoshoot has amassed 16.4M views on TikTok as users share their carved creations (most are sticking with the classic smiling face) along with the edited images from their photoshoot at pumpkin patches, gas stations, grocery store parking lots, and any landscape/background serving up fall vibes. These aren’t just regular iPhone photoshoots, either. Some people are pulling out high tech setups to ensure their shots top the rest circulating the platform. And just like the ghost photoshoot, many TikTokers are using Jack Stauber’s “Oh Klahoma” song in their videos (almost 450K clips have been made to date using the track). One of the most-viewed clips (55.2M views) under the audio is from a family who recreated the trend with their three-year-old—and trust us, this one’s a must-see. The trend has turned into a challenge as users put their creative spin on the photoshoot to get the ultimate spooky (and vintage-looking) shots while others are making bets with their friends to see which pumpkin head photoshoot can get the most likes on TikTok. 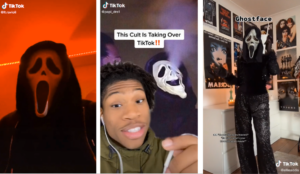 YPulse told you about what TikTok hashtags trended in October, and we’re adding one more to the list: #GhostfaceCult. This isn’t the first cult to pop up on the platform, but as sinister as it may sound, “cults” are really just super-fandoms. #Ghostface and #GhostfaceCult count 1.8B and 249M views, respectively, and TikTokers are changing their profile pics to Ghostface (the main character from Scream) images and following every account they can find with Ghostface profile pictures to join the cult-like fandom. The cult pays homage to the fictional serial killer just in time for Halloween and the new Scream film set to premiere next year. And for anyone still confused about the cult, TikToker @papi_dre1 sums up what #GhostfaceCult entails, dubbing it as “the best cult yet.” According to his clip, the cult originates from the Scream cult in Scary Movie, and the TikTok cult’s favorite question to ask other users is what their favorite scary movie is. The only evident goal behind the cult is to gain more followers, while videos under #Ghostface and #GhostfaceCult are just as random as the cult itself—users are sharing everything from Scream-inspired costumes to unsettling clips wearing a Ghostface costume. 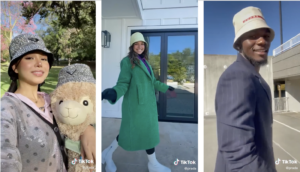 As more luxury brands make their way to TikTok, Prada’s sponsored #PradaBucketChallenge is sparking some mixed reactions on the app this week. The tag has garnered more than 3B views, and Prada enlisted Bella Poarch, Brent Rivera, Lil Huddy, and several more influencers for the challenge where they are required to show off a signature Prada hat while transitioning into a full Prada runway look from the label’s FW21 collections. And while the creators who are part of the sponsored campaign were sent their Prada ‘fits for the challenge, the luxury brand is encouraging users to “show your Prada side” by using their own Prada bucket hat and high fashion apparel to join the challenge. The campaign has been accused of coming across as tone deaf to those who aren’t one of the privileged few who own one of Prada’s elite bucket hats, giving the TikTok challenge an extremely high barrier to entry. One comment on Brent Rivera’s post reads, “Never thought I would see Brent in something else then sweat shirts and sweat pants,” and a comment on Prada’s repost from Lexi Rivera says, “If y’all sponsor me then I’ll do the challenge.” Meanwhile, comments under Prada’s original campaign video read: “Imagine being able to afford this, couldn’t be me,” and “This is how you know a brand has gone downhill,” and (perhaps the best), “I guess the devil really does wear Prada.” Around 788 videos have been made using the original audio for the campaign—signaling the niche (not to mention wealthy) group of users who can actually participate in the challenge. Although Prada’s goal may have been to make their products more “relatable” by enlisting influencers for the campaign, the nature of the challenge doesn’t quite match the carefree, authentic attitude of the app. YPulse’s luxury research shows that young consumers desire accessibility when it comes to luxury. Viral TikTok campaigns and trends from Kate Spade and Gucci have managed to become wildly successful on the app despite being luxury brands, proving that although young consumers may not be the primary drivers of the luxury market just yet, putting accessibility first is important for appealing to them on TikTok. 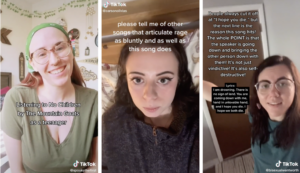 TikTokers Are Reviving “No Children” By The Mountain Goats

If reviving songs that predate their generation was a contest, Gen Z would win. They’re at it again—this time bringing back the “doomed divorce” anthem, “No Children,” by the Mountain Goats. And sure, when TikTokers gave new life to songs from ABBA,  Fleetwood Mac, or the “emo scene,” everyone learned to make sense of it, but for the Mountain Goats (a folk-indie band formed 30 years ago) their “No Children” song is “the least likely candidate for ‘viral TikTok sensation’” according to Vox reporter, Rebecca Jennings. The song started popping up on the platform at the beginning of the year, but it wasn’t until recently that one TikToker catapulted the song’s virality on the platform after posting his reaction: “this song is way too depressing. It sounds like a middle aged man crying over a girl he met in high school. Like get over it dude.” From there, “No Children” has inspired a dance trend, jokes about being the child listening to the song about the doomed divorce, and more than 15K videos have been made using the sound, with Jack Antonoff even participating. Young TikTokers’ love of the song isn’t completely random, though. Several videos tied to #TheMountainGoats (amassing 15M views) praise the song’s ability to “bluntly articulate rage.” OG Mountain Goats fans are talking about “No Children” on TikTok, too: “As a 2010-era hipster in recovery from an insufferable superiority complex, I am constantly forced to reckon with unlearning the impulse to gatekeep everything I love from everyone,” explains one TikToker who has committed to sharing a little background for the youngsters on the platform who aren’t familiar with the band. The song’s TikTok fame has elevated it to the Mountain Goats’ most-popular song on Spotify while counting 27M streams to date. The group’s official TikTok account (@mountaingoatsmusic) has reposted some young users’ clips set to “No Children,” and while head band member John Darnielle is thankful that the song has found a new audience, he notes: “I think many artists in our shoes would have said, ‘Maybe it’s time for us to start making our own TikToks.’ And I would say, ‘No, I’m not going to be the 54-year-old sidling up to the cool party with you kids. I’m not going to do the Steve Buscemi-with-the-skateboard thing.”

Dune fans and celebrities are sharing their reactions to the (highly anticipated) film on social media. Meanwhile, a Dune sequel is officially in the works.

The Immortal Snail Meme has made its way to TikTok (#ImmortalSnail amasses 180M views) as users make memes about if they would take $1B in exchange for being “hunted” by an immortal snail the rest of their life—the trend first started in 2014 and is popular on Twitter, Reddit, and now TikTok.

The Rock’s rap debut on Tech N9ne’s song “Face Off” has turned into a viral TikTok challenge—#FaceOffChallenge counts 97.7M views, and more than 340K videos from users creating memes related to the sound have been made using the sound.

Disney fans are begging the park to ban these raunchy shirts that no one asked for after a picture of a couple wearing the inappropriate merch went viral.

A rival “meme token” to dogecoin dubbed Shiba inu surged 30% in just 24 hours while more than doubling in price in the last week.

American Horror Story’s Sarah Paulson is behind a popular TikTok sound (“The killer is escaping!”), and Lizzo recreated the trend with Paulson in a clip that garnered 18M views in one day.

BJ Novak has graced social media with several images of his face printed on various products across the world, explaining how a photo of him was (accidentally) uploaded to a public domain—and social media users can’t get enough of it.

Some social media users are pretty fed up over fictional influencers they believed were real on TikTok.