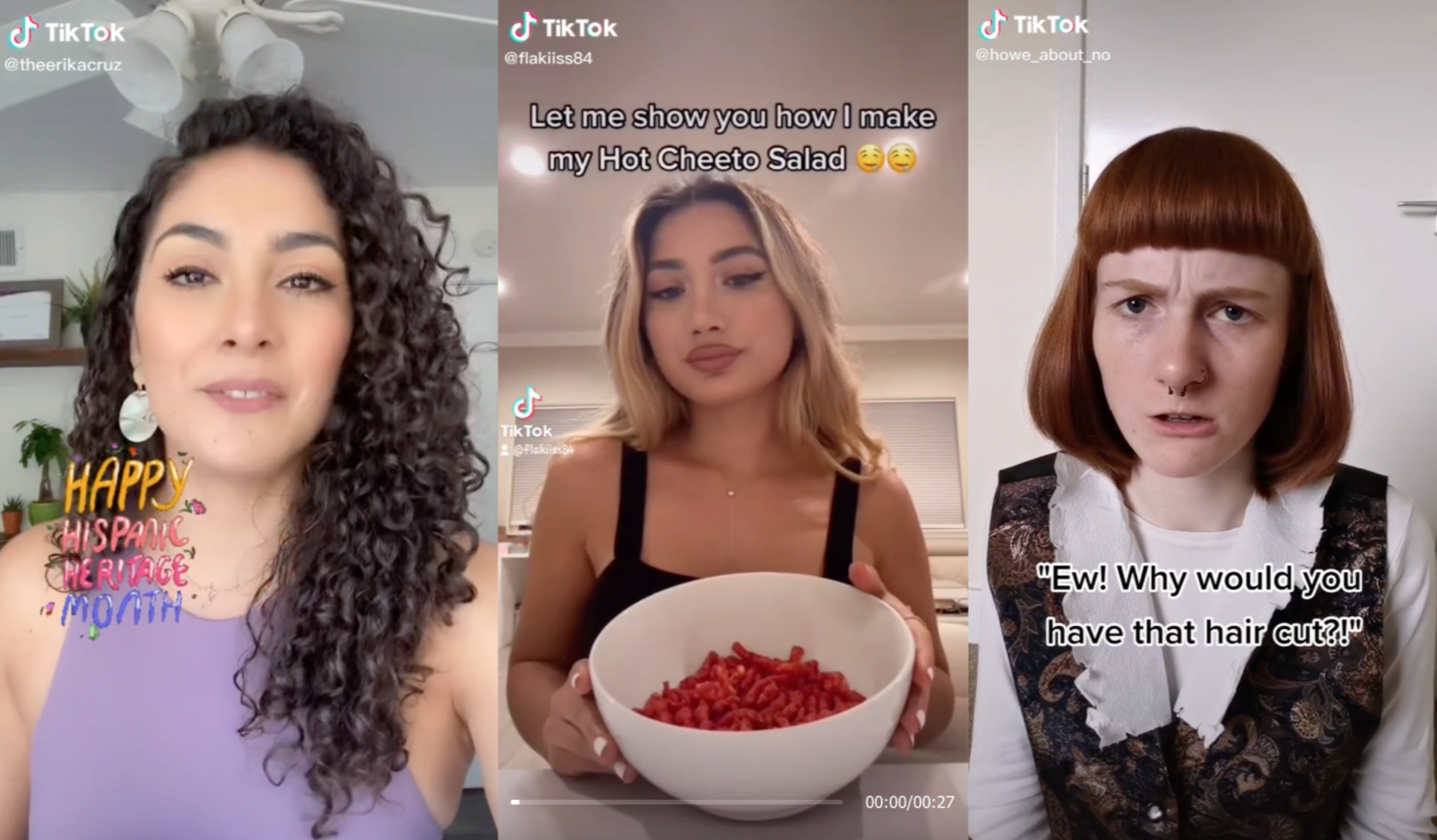 
From #Spooktember to #SummerRewind to #HelloFall, we’ve told you all about how young people are using TikTok hashtags to show their excitement about falling into autumn. But a lot of other things trended on the app this month, too, and we have the hashtags to prove it. Last week, we told you all about how #StudyTok took over the app as experts shared their study hacks just in time for back to school season, #OrigamiCamp was created to help TikTok and OnlyFans creators build community,  and who can forget Lil Nas X giving birth to his new album Montero, which came with a corresponding hashtag on TikTok that has garnered 1.7 billion views? But wait, there’s more: the devious lick trend spread through school across the U.S. and eventually forced TikTok to ban the hashtag.

Want to know more about the content and trends that are going viral thanks to TikTok? From #LatinxCreated to #SquidGame, here are six hashtags that took over young people’s social feeds in September:

September marks Latinx and Hispanic Heritage Month, and #LatinxCreated was used on TikTok to spotlight the community’s talented creators while celebrating their history. TikTok introduced its second cohort of 2021 Latinx TikTok Trailblazers via #LatinxCreated, and some of the tag’s most-viewed clips are from Latinx and Hispanic users sharing a variety of content from cooking, to comedy, to music. Trailblazers including @thealgorythm, @vanessafpena, and @saltycocina also count some of the most-viewed videos under the tag (currently amassing 348M views), sharing about their background, recipes, and more. #LatinxBusiness (123.3M views) also trended this month as Latinx and Hispanic creators used the tag to share about their small businesses and build community. TikTok also introduced the Latinx Creatives program in collaboration with Macro (a multi-platform media company that represents voices and perspectives of Black and BIPOC individuals) and will nurture 150 resident creators and musicians in a 10-week program starting in October.

#SuicidePreventionMonth (372.8M Views)
We told you how TikTok has been supporting young people’s mental health through social media awareness campaigns, and their latest #SuicidePreventionMonth initiative is in honor of Suicide Prevention Awareness Month. Many of the videos featured include users being transparent about their own stories of suicide attempts and how they overcame it, while some have a more lighthearted tone, joking about their struggles in a comedic fashion, and others simply share inspirational affirmations to help fellow followers get through the day. To coincide with the campaign, TikTok also launched new resources and tools for those struggling with suicidal ideations, which include an in-app resource list of global crisis hotlines to help users in every region, and information on how to engage safely with someone who may be in crisis. The resources can be activated when a user searches the word #suicide on the platform. Meanwhile, the tag #bekind, which has 13.2 billion views, was also launched by TikTok this month in partnership with Lady Gaga’s Born This Way Foundation to encourage users to share how they’re supporting their friends, family, or peers in the community through acts of kindness. According to the CDC, 26% of 18-24-year-olds reported having suicidal thoughts at the beginning of the year compared to 16-44-year-olds, and having social campaigns like #SuicidePreventionMonth and corresponding resources is something that could potentially raise awareness and help.

YPulse’s Borderless Culture trend report explores young consumers’ interest in content from other countries—and one of the latest to capture audiences’ attention is Netflix’s Squid Game, a Korean drama that has taken the number one spot on the streaming platform’s most-watched shows since it premiered earlier this month. The Hunger Games-esque survival drama series tells the story of a group of people who participate in a series of deadly children’s games, and the last ones standing win a cash prize of billions of dollars. According to Netflix co-CEO Ted Sarandos, the show is not only expected to be the streaming service’s top non-English show, but has a “very good chance” of being their most popular show ever. The show has become so popular that it’s caught the attention of TikTokers: The hashtag #SquidGame has 11.1 billion views, and while it features reactions, memes, clips, makeup tutorials, and fan edits of characters, it’s also full of fans re-creating (non-deadly) versions of the game featured on the series, including “red light, green light,” with audio from the show. (In the show, characters race to the finish line, but if movement is detected during a “red light,” they’re killed on the spot by the gamekeepers). Others are recreating another game that involves cutting shapes out of popular South Korean street food dalgona candy (a.k.a honeycomb toffee) using a stencil without breaking it. In recent years, TikTokers have been using hashtags to show their excitement around some of Netflix’s popular international shows—including #moneyheist, which has 1.7 billion views—and the #SquidGame hashtag is just another way they’re leveraging their global offerings.

#TikTokFashionMonth (6.9B views)
From New York Fashion Week to the Met Gala to the VMAs red carpet, fashion took over the month of September—especially after a year when most major fashion events were cancelled due to the pandemic. TikTok used this as an opportunity to celebrate all the fashion events with the tag #TikTokFashionMonth, currently at 6.8 billion views (and counting). The hashtag is filled with content of users talking about their favorite looks from the Met Gala and red carpet, their own “iconic” stylish ‘fits and accessories, and what they imagine they’d wear if they were invited to these events. We recently told you that fashionable going out clothes is one of top fashion trends that Gen Z and Millennials are interested in, and having fashion forward hashtags  gives them an outlet to express themselves through stylish ‘fits. But the popularity of #TikTokFashionMonth also underlines how fashion content has migrated from magazines to social media, and how users of the platforms are turning once-exclusive events like the Met Ball into participatory, and more democratized, entertainment.

“Berries and cream, berries and cream, I’m a little lad who loves berries and cream,” is the sound of a (strange) new TikTok trend resurfacing the catchy jingle from a 2007 Starburst commercial. #BerriesAndCream currently has 1.2B views, and is particularly popular among those with a “Little Lad-esque” haircut. Others are getting a bit more creative by mixing the “Little Lad” sound with Abba’s “Mamma Mia” and Lukas Graham’s “Mama Said.” The creatives behind the original Starburst “Bus Station” (a.k.a. “Little Lad”) commercial have responded to #BerriesAndCream’s popularity, noting that they’re not surprised the song is making a comeback with the next generation considering that a Little Lad Dance how-to video was created for the occasion: ”It’s made for TikTok. It’s the first TikTok dance—that we just happened to create for YouTube,” Gerry Graf told Adweek. The original Little Lad has also responded to the trend by joining TikTok as @thereallittlelad who is keeping the trend alive one (scary) TikTok at a time.

Lastly, it wouldn’t be a TikTok hashtag roundup without talking about a hot new food trend circulating the app. TikTokers are making #hotcheetosalad after learning about the recipe from @rxthism who first shared her variation of the snack, mixing one bag of Flamin’ Hot Cheetos with cucumbers, cilantro, hot sauce (specifically Tapatío’s), and lemon juice. Fans of the food mashup are putting their spin on the Hot Cheeto Salad and sharing their shocked reactions to how good it tastes. One of the most-viewed videos is from @snackqween—who is known for being involved in some of the biggest food trends on TikTok—garnered 86.6K views (the original video from @rxthism amassed 640K views).