BTS fans flooded social media in support of the K-pop band’s United Nations address, A TikToker’s terrible brand logo redesigns have taken over social media, “Origami Camp” is a (viral) new content creator collective consisting of NSFW creators, #StudyTok is trending as students and experts share their hard-earned advice, and more internet fun and buzz you should know about this week! 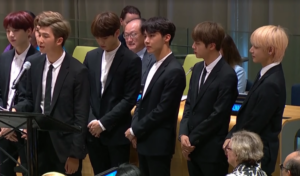 BTS Drew In Millions of Young Viewers During Their UN Address

BTS made their second appearance at the United Nations’ headquarters in New York Monday night, promoting the UN’s goals for 2030 like ending extreme poverty, preserving the planet, and achieving gender equality. The President of the Republic of Korea Moon Jae-in was this year’s special guest for the UNGA’s Sustainable Development Goals (SDG) Moment, and introduced BTS as an “exceptionally outstanding group of young men who are connecting with the youth across the world.” The seven-member K-pop band took turns talking about climate change, the COVID-19 pandemic, and the importance of coming together to overcome global issues during their seven-minute speech. Members RM and V emphasized the impact of young people’s interest in environmental issues (77% of Gen Z and Millennials say it’s up to their generation to stop climate change from getting worse according to YPulse’s sustainability research) explaining, “I hope we don’t just consider the future as grim darkness, we have people who are concerned for the world and searching for the answers.” A “BTS ARMY” of fans showed their support on social media, flooding the United Nations’ YouTube channel with the band’s signature purple heart emoji, crying emojis, thumbs-up emojis, and heart emojis. More than 980,000 viewers tuned into the United Nations’ YouTube channel for the event, and a video of the group’s speech on the United Nations’ channel has been viewed more than six million times. BTS also debuted the music video for “Permission to Dance,” which was filmed at the UN’s New York headquarters with the singers dancing their way through the General Assembly hall to the garden overlooking the East River. BTS also launched the “Love Myself” campaign with UNICEF last year aimed at protecting children and teens from violence. While BTS’ involvement at the United Nations’ General Assembly meeting was met with surprise by some (yes, we’re talking about James Corden’s comment during The Late Late Show where he not-so subtly discredited the band for only having a “fanbase of 15-year-old girls”), young people were in fact delighted to see one of their favorite celebrity icons stand up for sustainability goals and climate change.  BTS has built a massive global audience since debuting in 2013, and the band’s brand partnerships with McDonald’s, Hyundai, Samsung, and more have put the K-pop stars at the center of pop culture for the next gen. 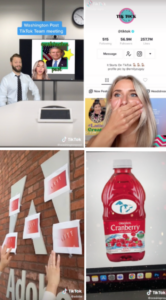 Emily Zugay (@emilyzugay on TikTok) is a 24-year-old content creator with one million TikTok followers who “graduated from college with a degree in design,” and has quickly gone viral for redesigning some of the most popular brand logos…to be horrible versions of the originals. The first logo victim was Starbucks, and quickly after Zugay shared her “star-studded” re-creation on TikTok (garnering 2.2M views), brands including Adobe, McDonald’s, Glossier, Tampax, and even TikTok begged for Zugay to try her hand at redesigning their iconic emblems. Since unveiling her new designs, Nascar, Ocean Spray, Tampax, The Washington Post, and TikTok have changed their TikTok profile photos to Zugay’s logos—Tinder even changed its name to “TIDDNER” based on Zugay’s misspelling of the brand name in her reimagined Tinder logo. The Washington Post and Adobe responded to their ugly logos by making their own TikTok videos “thanking” Zugay for her work: The Washington Post created a sketch mimicking a staff meeting where staff vote to adopt Zugay’s logo and Adobe’s clip shows the company printing out Zugay’s “ABODE” logo splashed in a red and white gradient and scattering it across their office. According to Insider, Emily Zugay is a pet portrait artist from Southeast Wisconsin and explains that she used Adobe Illustrator to create her “repulsive but believable” designs. Collectively, Zugay’s TikTok videos documenting her logo redesigns have amassed 50M views. 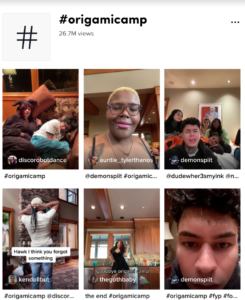 YPulse told you about content creator collectives like FaZe Clan, Fenty Beauty House, and the former Sway House and Hype House. Now, there’s a fresh content house on the block known as “Origami Camp,” consisting of several OnlyFans and TikTok creators who joined forces over the weekend to create (mostly safe for work) content together at a rented cabin in an undisclosed location in the U.S. @hawkhatesyou and @the_gothbaby brought the group together following OnlyFans’ previous decision to ban sexullay explicit content, and member Natasha Noell (@babygirlnoell) says, “The purpose of the Origami Camp was to get some creators who know each other together to collab and make TikToks, plus any other content [we] were comfortable making since all of us are sex workers.” The group is using “Origami” as a substitute for the word “orgy” to avoid censorship online, allowing them to create community based on their shared involvement in the OnlyFans community as sex workers, and #OrigamiCamp on TikTok currently has 27M views. Considering TikTok’s community guidelines, videos using the tag are in fact safe for work and show how the creators bonded over the weekend by dancing to some of the most popular trends on the app while creating their own trendy-worthy moments along the way. Twitter users quickly took note of the trend after seeing several videos about #OrigamiCamp on their FYP, and shared their positive responses like @_TiffaniRose’s comment: “My entire fyp is just the origami camp and yeah…I like it here.” Considering the stigma that content creators on OnlyFans (and sex workers in general) continue to face, Origami Camp signals a positive movement for this community of creators: “Our community deals with so much backlash from [both] regular people and platforms that will completely censor us. It was nice to finally get some recognition for the years of work we’ve put into our content,” Luna (@lunababyy69) says. YPulse’s Clicking on Community trend research found that 34% of Gen Z and Millennials say they find their sense of community from a social media platform, and Origami Camp is one (niche) example of how young people are using their shared passions to come together both IRL and online. 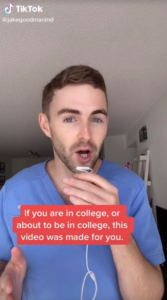 TikTok has seen a massive amount of subcultures emerge on the platform, forming communities around anything from professional jobs to water bottles and skincare. #BookTok (21.4B views) and #SkinTok (1.1B views) are some of the most popular subcultures that young people can’t get enough of, and with school officially back in session, #StudyTok (1.6B views) has emerged as students search for advice and experts share their hard-earned tips. Note taking tips and study techniques are the most popular videos under the tag (apparently there’s someone known as “Dr. Brad” who swears by his note taking method—his video has 1.7M views), along with aesthetically-pleasing desk setups and a significant amount of “secrets teachers don’t want students to know about.” YPulse’s education research found that 47% of college students and 26% of middle/HS students will be doing online learning for the fall semester, and online platforms like TikTok are helping students ease the complexities of remote learning (and school in general) as experts and former/current college students share advice. 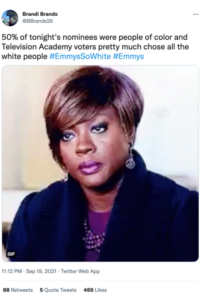 The Weeknd has been accused of plagiarising his “Call Out My Name” 2018 track from electro-house duo Suniel Fox and Henry Strange.

A community of young investors on TikTok are taking note of Nancy Pelosi’s stock trading disclosures and using them to inspire others (and themselves) on where to invest.

TikTokers (and Ryan Reynolds and Will Ferrell) are putting their spin on the Grace Kelly trend, telling traumatic stories while singing Mika’s 2007 hit.

#ZaraPerfumes is trending on TikTok, amassing 137.9K views and taking over the subculture “PerfumeTok.”

Netflix confirmed that Tiger King 2 is reportedly in the works and could be coming to the streaming service by the end of the year.

Selena Gomez, Kourtney Kardashian, and more celebrities/influencers are putting their spin on the Linda and Heather theme song trend on TikTok—2.2M videos have been made using the sound.

Adam Devine is reportedly working on a Pitch Perfect series produced by Elizabeth Banks at Peacock.