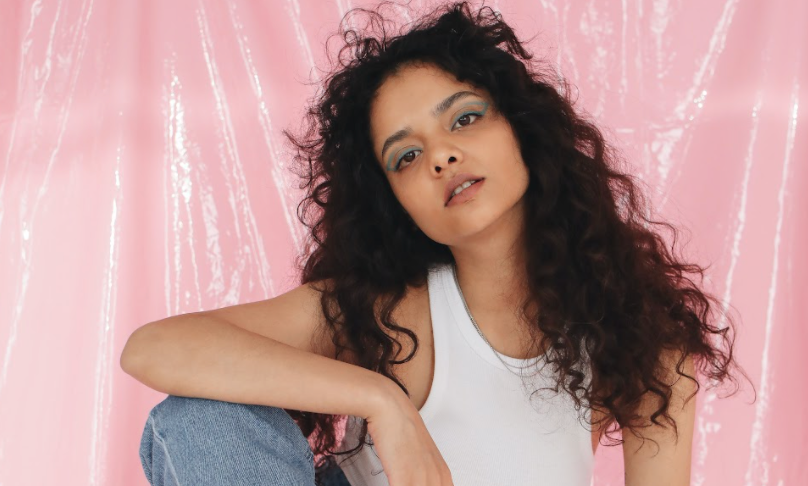 As young consumers’ fashion preferences and needs continue to shift, we’ve been sharing insights from our recent fashion preferences and style behavioral report, from who influences Gen Z and Millennials’ fashion purchases to their favorite place to buy clothing. It’s clearly an area of importance to young consumers and the brands trying to reach them, but it’s also an industry that has had to pivot significantly to deal with pandemic shifts, and now faces continued changes as they return to “normal,” but with a different set of expectations and desires.

YPulse’s recent fashion report digs deeper into the types of clothing young consumers are currently buying and the fashion trends they are most into, and what that means for brands. From the loungewear that became a quarantine uniform to Y2K fashion and gender neutral looks, our survey asked what fashion trends they’re interested in, and we found that Gen Z and Millennial females are not necessarily into the same styles: 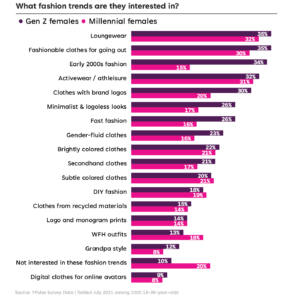 Well, there is one thing that Gen Z and Millennial females are both into, and it happens to be one of the biggest fashion trends of the pandemic: loungewear is still a top trend young females are interested in, as is athleisure. But the two generations’ styles diverge significantly from there.

Gen Z females are far more likely to say they are interested in early 2000s fashion, clothes with logos, minimalist looks, fast fashion, and gender fluid clothes. . The interest gap is especially large when it comes to early 2000s fashion, which over a third of Gen Z females say they’re interested in compared to 15% of Millennial females. When we asked the same question last year, there was only a slight difference between the two groups, but this year, Gen Z interest has spiked significantly. We told you about all the ways that Gen Z is bringing back the 2000s, including Y2K-era makeup to colorful “kiddie” jewelry, velour tracksuits, and footwear. Google recently reported that “Y2K” was among Gen Z’s top trending fashion searches, which saw a spike of over 1,250% in the last year. Related searches included those for tracksuits, skeleton zip-up hoodies, low-rise jeans, baby t-shirts, and miniskirts. Other products that saw a spike in Google searches included trucker hats, slip dresses, claw clips, mom jeans, and platform shoes. In general, the 2000s aesthetic has been taking over during the pandemic with Gen Z as they turn to things that bring them comfort during a difficult time, and as one trend forecaster told VICE: “Unable to imagine a coherent future, we revert to a nostalgic mode of utopian longing. It’s easier to see the past through rose-tinted glasses than deal with the dystopian world we seem to be living in right now.” There is also a cyclical nature to decade-specific trends: when Millennials were teens in the ‘90s, they reimagined ‘70s fashion, now Gen Z is finding inspiration in the fashions that trended 20 years ago as well. Meanwhile, Millennials lived through the fashions of the 2000s and are clearly less eager to relive them.

Gen Z females are more likely to be interested in fast fashion than Millennial females, and there’s a lot to back that up. Fast fashion retailer Shein took the top spot as Gen Z’s favorite place to shop for clothing, while other popular fast fashion brands like Forever 21, Rue 21, and H&M also made their top 10. Their interest in fast fashion is most likely due to its convenience, affordability, and the speed at which fast fashion retailers are picking up the trends that young consumers are seeing in their social feeds. But secondhand clothing is a fashion trend that ranks not too far below fast fashion, and it’s clearly being fuelled by Gen Z females. Sustainability is still an issue that is top of mind to teens, and according to a recent ThredUp and GlobalData survey, more than 33 million people bought secondhand for the first time during the pandemic, and 76% of those shoppers say they plan to increase their resale spending in the next five years (the market is currently valued at $36 billion and is expected to grow to $77 billion in five years). ThredUP’s VP of marketing notes that Gen Z’s shopping mindset is totally different than previous generations: Gen Z is 165% more likely than Boomers to consider the resale value of clothing, they’re 83% more likely to consider that apparel can have multiple owners, and they’re 33% more likely to sell clothing instead of throwing it away.

Gen Z females also are more likely to be interested in gender-fluid clothing compared to Millennial females. Our Gender Blur trend research found that a majority of 13-20-year-olds have done or are interested in buying clothing that is gender neutral, while 40% say the clothing industry is doing well at making people of all genders feel welcome—and more brands are answering their call: Within the last year, clothing, cosmetics, and jewelry brands have launched gender-fluid collections.

But it’s not just young females who have differing fashion interests. Gen Z and Millennial males’s responses to this question also revealed some big differences: 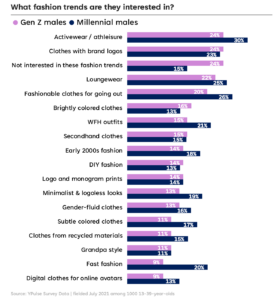 Here we see a bit of a switch: Millennial males are more likely than Gen Z males to say they’re interested in a range of trends, including activewear / athleisure, fashionable clothes for going out, work from home outfits, early 2000s fashion, minimalist and logoless looks, subtle colored clothes, clothes made from recycled materials, and fast fashion. Meanwhile, Gen Z males are more likely to say they’re not interested in any of the trends listed. Our fashion survey also found that 82% of 13-20-year-old males say they don’t care about fashion trends and just wear what they like, and they’re the least likely to agree with the statement “It is important for me to stay on top of the latest trends and fashions.”