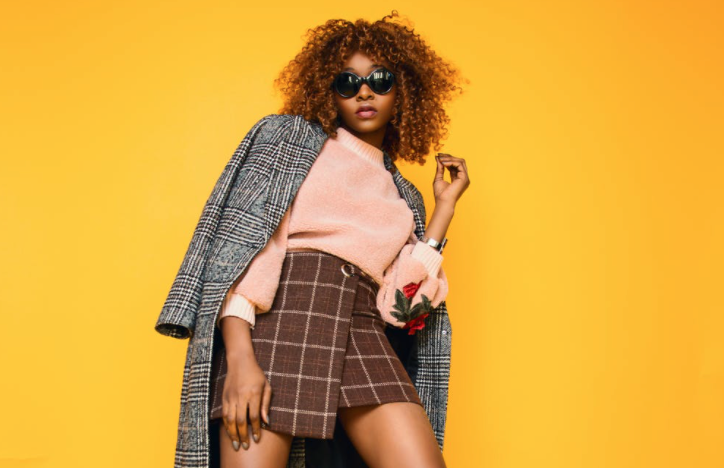 What is most likely to influence young consumers’ clothing choices when they shop? Once again, Gen Z and Millennials’ answers are not quite the same…

We’ve been tracking young consumers’ shopping habits and interests for years, and though COVID changed the kind of clothing most young consumers shop for, they’re slowly starting to their normal life in a post-quarantine world, and that applies to their fashion as well. Loungewear and at-home wear is still a priority to them, but they’re also re-focused on fashionable going out clothing. Our fashion preferences and style behavioral report shows that 71% of 13-39-year-olds agree: “I am excited to dress up again now that quarantines are over.” But as fashion shifts, where are they drawing fashion inspiration—and who or what is actually influencing their clothing purchases?

We recently told you Gen Z and Millennials’ favorite places to shop for clothing, and our fashion preferences and style behavioral survey also asked them who or what is most likely to influence the clothing items they buy: 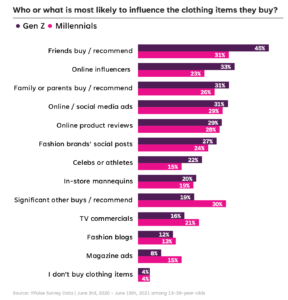 Looks like the biggest influencers are the people that Gen Z and Millennials know IRL. Overall, friends buying or recommending clothes is the number one influencer on young consumers’ clothing purchases—especially Gen Z. Nearly half of 13-20-year-olds say that their friends buying and / or recommending is what most influences them to buy clothing items compared to a third of 21-39-year-olds. Gen Z is in an age range where friends’ opinions rule over all else, so of course they are more inclined to trust their friends for recommendations or advice on clothing. Our shopping and retail behavioral research found that 58% of 13-20-year-olds say stores are a place for them and their friends to hangout, so it’s likely that teens consider talking about clothes with their friends part of that social experience as well. Apps have emerged in recent years to allow young people to digitally connect with their friends about clothing and even share feedback and recommendations. Take for instance Squadded, which has not only digitized the mall experience for young shoppers, but lets them add clothes and accessories they want onto a wishlist, and gives their friends the ability to interact with the item through “likes” or comments. Gen Z is also more likely to say their clothing choices are influenced by their family and parents compared to Millennials, but because many of them are most likely still living with their family, it makes sense that their clothing decisions are influenced by their parents, siblings (who they might be borrowing and sharing clothes with), or other relatives that they’re living under the same roof with.

Online influencers are the second biggest, well, influence over young consumers’ clothing purchases and unsurprisingly, Gen Z’s clothing choices are also significantly more likely to be influenced by online influencers compared to Millennials. That aligns with our celebrities and influencers behavioral data, which shows that 60% of 13-20-year-olds follow an online celeb compared to 42% of 21-39-year-olds. When we previously looked at what young shoppers value the most when it comes to decide what products to buy, Gen Z was more likely than Millennials to say reviews and recommendations from online celebs. And recently told you about what young consumers have done because they learned about it from an influencer, and checking out a new store / retail store and trying a new style / fashion look were among the responses, so it’s clear that influencers play a major part in influencing their fashion choices. With the amount of ‘fit pics taking over influencers’ social feeds, how can Gen Z not help but be swayed by all the clothing and accessories? Gen Z is also more likely than Millennials to say that traditional celebs or athletes wearing a clothing item influences what they buy.

Meanwhile, Millennials are more likely to say the clothing items they buy are influenced by their spouse / significant other compared to Gen Z, not surprising given their comparative age and life stage. Two other areas in which Millennials are more likely influenced than Gen Z is with magazine ads and TV commercials. Because the younger generation has grown up on social, digital, and streaming platforms, chances are they’re not seeing as many ads or commercials if they’re not buying magazines or watching cable TV as much as their older counterparts, which our recent media consumption research found Gen Z are less likely to spend money on compared to Millennials

Of course, every young person has their own individual style and interests when it comes to clothes, but there’s a lot of people in their lives, online and off, that help shape those decisions. So, as young consumers go shopping for clothes—whether they’re going back to school, going out for fun, or continuing to quarantine at home—brands should keep in mind their biggest influences when it comes to clothing purchases, and that they’re not the same for Gen Z and Millennials.