The Competition to Attract Online Creators (With Payments) Is Heating Up 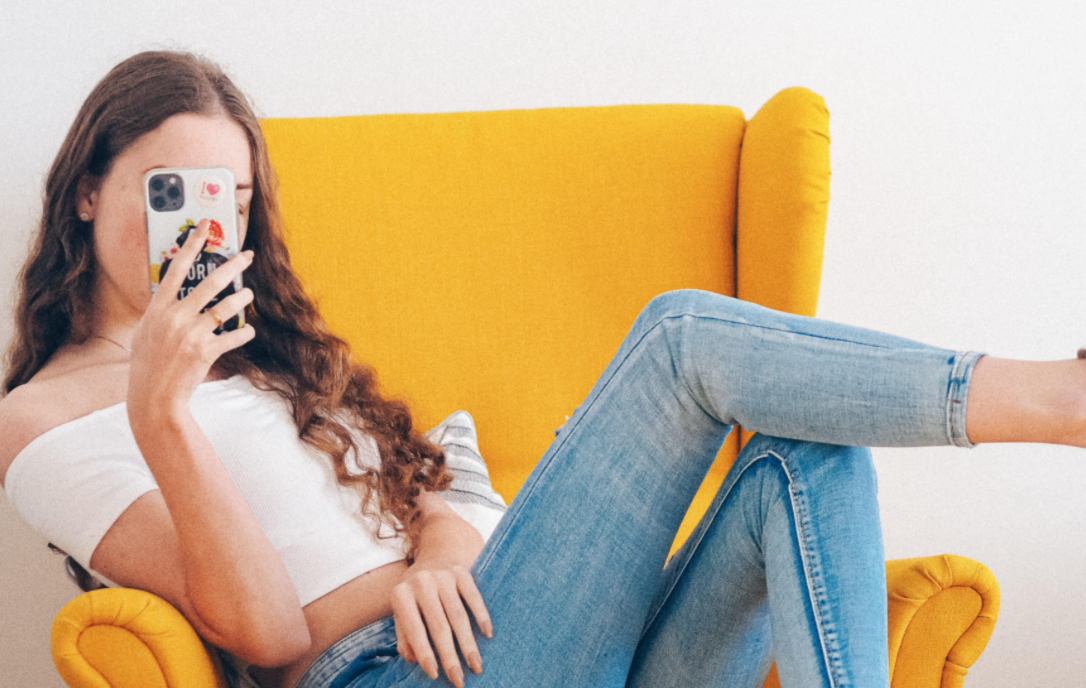 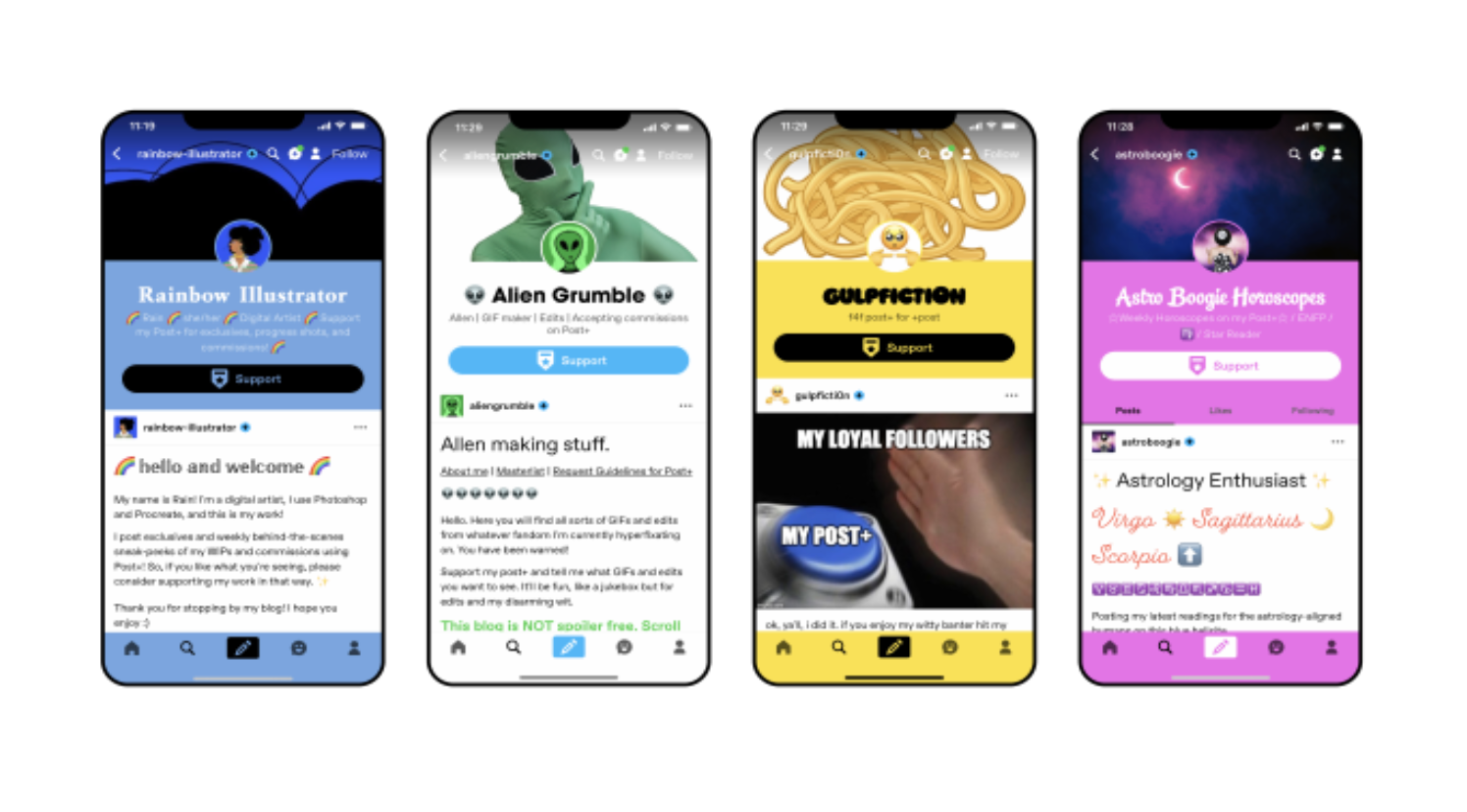 From virtual tip jars to cash bonuses, creator payments are becoming the norm as social networks compete for talent…

YPulse’s recent celebrities and influencers behavioral research found that 47% of 13-39-year-olds follow online celebrities / creators, while 22% say they would buy a product that was recommended by online celebs. While the benefits of being the home to the online creators and influencers that Gen Z and Millennials follow is clear, many social platforms have a rocky history with actually helping those creators monetize their content. With monetization a tricky prospect on mainstream social, platforms that help creators to directly charge fans for exclusive content, like Patreon and OnlyFans, have flourished. The trend of “virtual tipping” for content creators on social platforms also grew during the pandemic, as the popularity of influencers grew and young people sought out more content and went out less than ever before. Some creators are using separate tools like StreamElements, which allows streamers to manage their live broadcasts better and develop tipping plug-ins that alert them when they receive a donation. Twitch has actually been offering donation links for its streamers in recent years with third-party tools (like Bits) through their currency system.

Newer platforms have tried to jumpstart their talent pools by showering creators with money and gifts: in 2020, Triller gave creators lavish gifts, including a Rolls Royce for Charli D’Amelio, just for using the app. Clubhouse introduced a tipping feature along with subscription and ticket sales for its users. But with more platforms than ever before competing for influencers and creators to call them home, social media’s biggest players have been racing to get their most popular users paid—both by building tools for fans to tip them without the need for a third-party vendor, or by paying those creators big bucks themselves. From launching their own virtual tip jars to creating paid subscription tools to paying creators directly to use their new tools to, here’s how some of the biggest social networks are amping up payment features and programs: 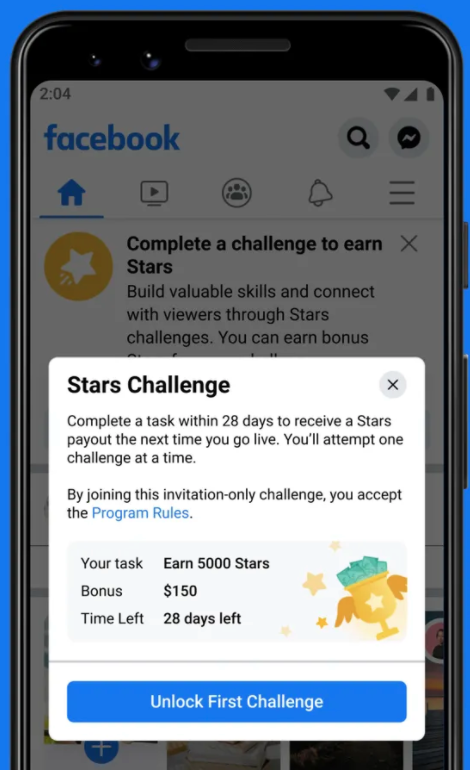 Instagram is one of the original spaces that influencers became a Thing, but while sponsored content was practically born on the app, they have had few tools for creators to directly monetize their work on the platform. But as a way to attract influencers, or keep them from defecting, the OG social network recently announced that they were planning to pay out $1 billion through 2022 to users who create content for Facebook and Instagram. As part of the initiative, the company will roll out new bonus programs between now and the end of the year that will reward and pay out creators for hitting “specific milestones.” One of the bonus programs include a Reel Summer Bonus that launched this summer and paid users in the U.S. “who create great Reels content for Instagram,” while one on Facebook gave users the opportunity to participate in a “Stars Challenge” and earn rewards for completed tasks they did during a live stream. The company is also making plans to launch dedicated spaces in both Facebook and Instagram this fall for creators to learn about the bonuses that they can work toward. According to CEO Mark Zuckerberg: “We want to build the best platforms for millions of creators to make a living, so we’re creating new programs to invest over $1 billion to reward creators for great content they create on Facebook and Instagram through 2022. Investing in creators isn’t new for us, but I’m excited to expand this work over time.” Instagram is also rumored to be joining the trend of exclusive paid creator content (a la Patreon) with a new Exclusive Stories feature. According to TechCrunch the new tool will allow creators to create content that is only available to their Members who (it’s assumed) will need to pay for access. 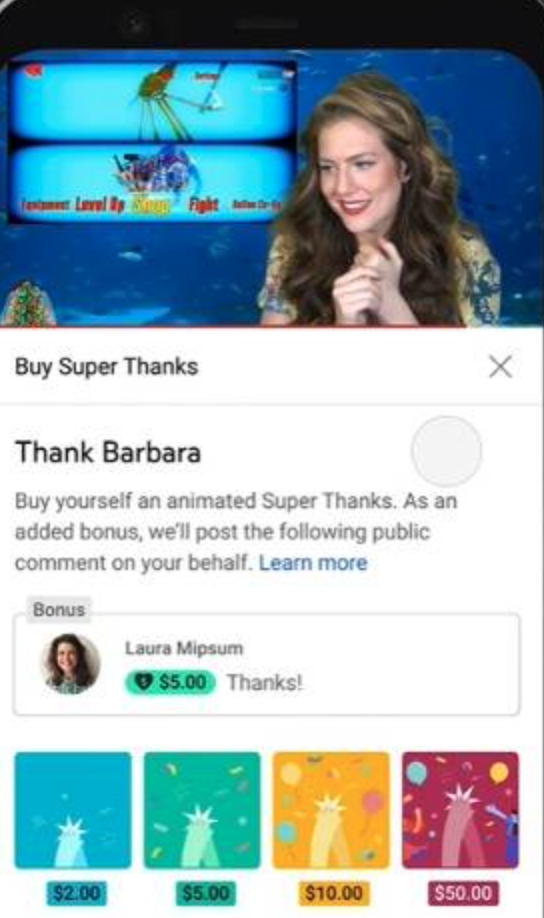 YouTube Super Thanks & Shorts Fund
YPulse’s social media monitor research found that 71% of 13-39-year-olds are using YouTube, and we also told you how entertainment platforms like Snapchat, YouTube, and Netflix are competing with TikTok’s short-form video empire, and in the spring, YouTube amped up their recruitment efforts by offering $100 million to creators in the U.S. and India who come to Shorts to make original content. The TikTok-esque feature launched in the U.S. in March. The company has been reaching out monthly to creators with the most engagement and views, and essentially anyone, as long as they’re making original content, is eligible to take part in the app’s offer. YouTube’s goal is clear: the social platform wants to achieve a sense of exclusivity and originality, and since Shorts doesn’t offer a built-in way to make money, this upfront payment could be enough to get people to migrate from TikTok. In fact, recent reports are that it’s working, with Hollywood Reporter claiming that TikTokers are seeing “insane” subscriber growth thanks to Shorts. Meanwhile, YouTube also launched a “Super Thanks” feature in July, that serves as a virtual tip jar where viewers can donate money to their favorite channels. Users will be able to access the “Super Thanks” icon under each creators’ individual videos, and by clicking on the “Super Thanks” icon, it will trigger “a celebratory explosion of animated balloons on the screen,” and give viewers and fans the option to comment their reason for donation. From there, they can contribute amounts ranging from $2 to $50—with a third of the proceeds going toward YouTube. The rollout is expected to take full effect by the end of the year. 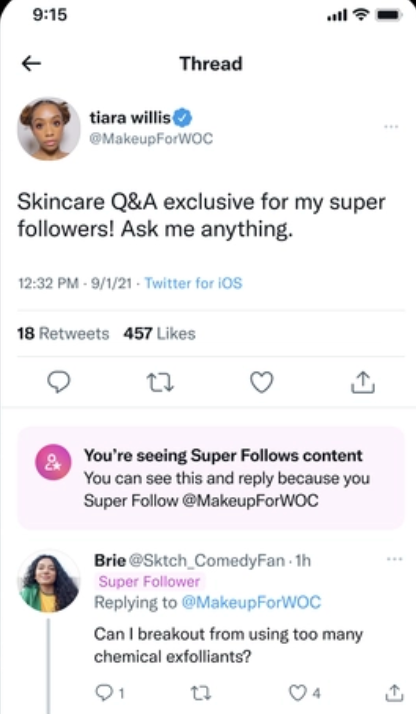 Twitter’s Super Follows
YouTube isn’t the only major social platform getting in on the virtual tip jar trend: Twitter recently announced some new features that would allow creators to get paid for some of their content. Their Ticketed Spaces are live audio rooms with pre-paid tickets that people can buy, rolled out to some iOS users. Ticketed Spaces is an additional function added to Twitter’s Spaces feature, which is similar to Clubhouse, where users can host events in live audio rooms. In order for users to be able to use the Ticketed Spaces tool, they have to be over the age of 18, and would’ve had to host at least three Spaces in the last month and have at least 1K followers. Tickets can be sold for between $1 and $999, and hosts can control how many people enter their space, limiting it to five or 100 attendees. Meanwhile, they just launched their “Super Follows” feature, which allows creators to sell subscriptions for access to special content. With this tool, influencers like makeup artists or sports commentators can offer “behind-the-scenes content,” early access, or other perks to their subscribers for fee ranging from $3-$10 each month. 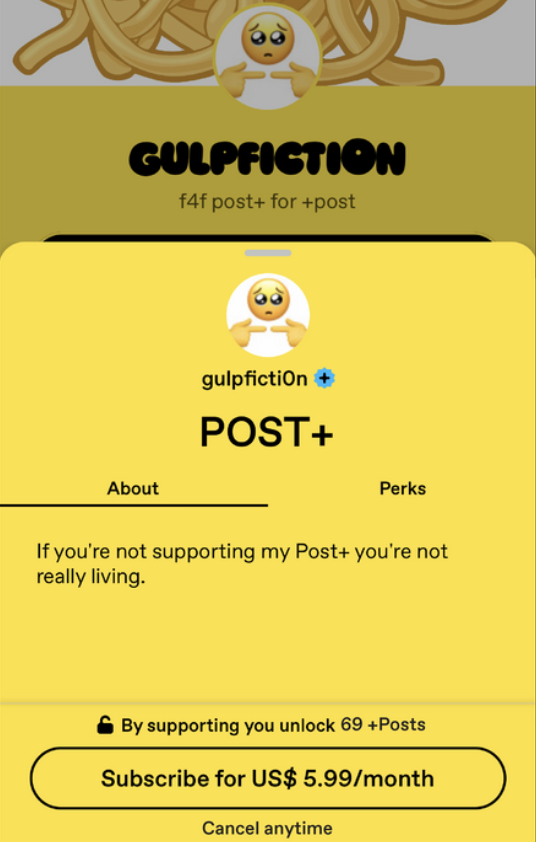 Tumblr’s Post+
TikTok isn’t the only one mimicking OnlyFans and Patreon. Tumblr is launching Post+, a new paid subscription tool they started testing at the end of July. As part of the feature, content creators can choose between three monthly prices to charge their followers—$3.99, $5.99 or $9.99—and Tumblr will take a 5% cut of subscription fees. According to the company, 48% of its users already fall within the Gen Z demographic, and with the new feature, Tumblr is hoping to “woo younger bloggers”—particularly Gen Z—and help keep them on a platform that “rose to prominence among teens and college students in the early 2010s as a place to share, memes, photos, and creative writing.” Tumblr chief product and technology officer Lance Willett says that he believes younger users value being paid to post: “When we looked at the younger generation, trying to figure out what would be the hook for them, we decided to make Post+, because it’s something that will push the boundaries and it’s following their behavior they’re already doing.” 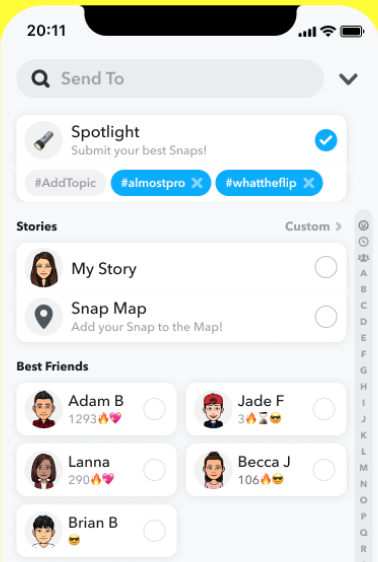 In 2020, Snapchat saw massive growth, and YPulse social media monitor data shows that 44% of 13-39-year-olds are currently using the app. This year they focused attention on bringing in more top creators and influencers to compete with TikTok and other platforms—by paying them massive amounts of money for creating popular content. The app publicized that they would be paying top influencers and creators from other platforms millions of dollars if they created viral content Spotlight. Dancing videos, prank videos, challenges, tutorials, and other content that goes viral was eligible for a big payout, and the feature reportedly reached 100 million users two months after it launched thanks to the resulting goldrush. According to Snap’s CEO Evan Spiegel, users were uploading an average of 175K videos per day back in February. Casey Cam was one of the former TikTok stars made nearly $3 million for his Spotlight content that was going viral. But while the allure of big prize money for creating viral content was certainly a headline maker, CNBC recently reported that creators are leaving the feature as the payments “dry up”—indicating that building tools for creators to be paid by fans and platforms in an ongoing long term way, rather than a raffle-like one-off prize, is the more successful monetization path for platforms. 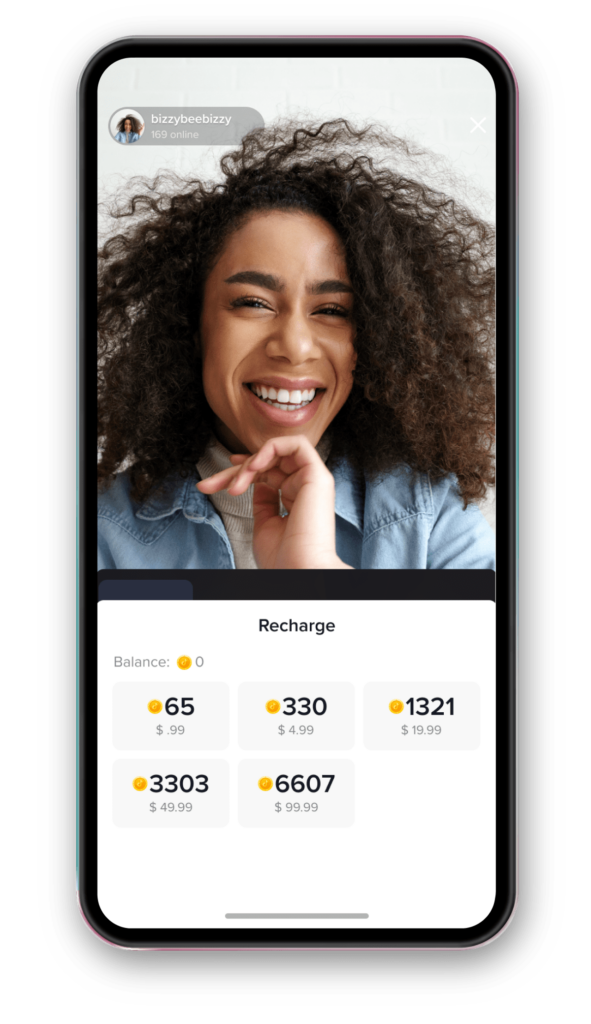 TikTok’s $200M Creator Fund & Shoutouts
TikTok also introduced a TikTok Creator Fund earlier this summer, aimed at supporting ambitious creators who have built careers on the app, including LGBTQ+ TikTok trailblazer Boman Martinez-Reid, Kentucky’s beloved father-son trio The McFarlands, beauty creator Challan, and Tabitha Brown who became the face of the vegan community with her personable cooking videos. The fund is starting with $200 million that it’s distributing over the course of this year, and will grow the amount it hands out to creators over time. Avani Gregg (beauty and makeup tutorial creator), Brittany Tomlinson (comedian with 5 million followers know for her Kombucha Girl video), and Spencer Polanco Knight (a beatbox artist with 40 million followers) are among the first nineteen creators to receive earnings from TikTok’s Creator Fund. Additional monetary opportunities from the platform include TikTok’s $50M Creative Learning Fund, TikTok LIVE streams, and the TikTok Creator Marketplace—all aimed at helping 18+ creators receive additional earnings that they can put toward “creatively connecting with an audience that’s inspired by their ideas.” And to help creators monitize their content directly, TikTok is also testing a Cameo-like feature dubbed Shoutouts, allowing users to request and pay for videos from their favorite creators. TikTokers pay upfront for their requested videos, wait up to three days for the creator to accept, and can have the final video in their DMs within one week—and creators appear to have the power to set their own rates. The feature is reportedly only available in Turkey and Dubai for now, and use TikTok’s virtual currency—which is already being used to “pay” creators via virtual gifts. Cameo took off last year as a platform where fans can pay celebrities to create personal messages, so “Shoutouts” could take off as a channel that not only strengthens young people’s connections with influencers, but supports creators’ work as well.