TikTok #SkaterGirls Are Leading the Skateboard Revival on The Viral List 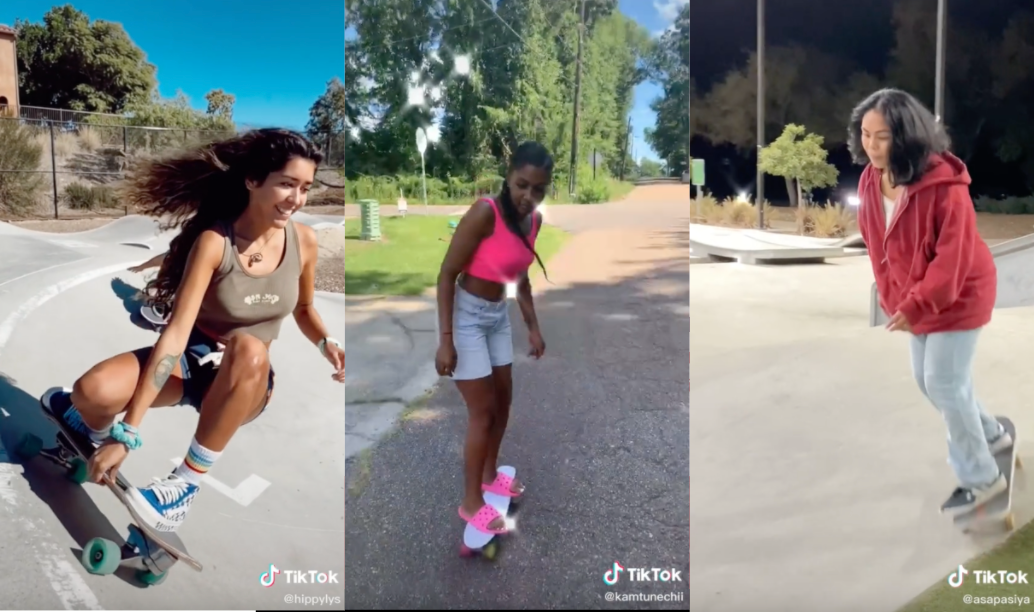 TikTok and skater girls are fueling demand for skateboards, other TikTokers are transforming themselves into ‘00s pop stars in a new Free People-sponsored challenge, young people are making “waxed and vaxed” a thing, and this female-led pop-punk band is being accused of being “industry plants” by online users—plus other youth news taking over social media this week! 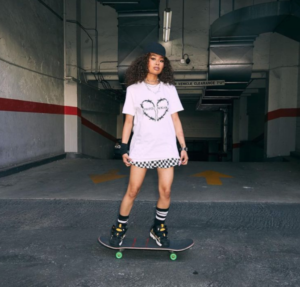 Thanks to TikTok and Skater Girls, Skateboards Have Been Selling Out

Last year, when people started suffering from cabin fever during the warmer months, they began making old trends new again. We told you about how roller skates sold out last summer, and demand was high for other wheels as well—and now skateboards are having their sell-out moment. According to Action Watch data, sales of skateboarding equipment in the U.S. increased 118% by last June compared to a year earlier. In 2018, the skateboard market was valued at $1.9 billion and before the pandemic, it was already projected to reach $2.4 billion by 2025. Jeff Kendall, the president and CMO of top skateboard manufacturer and distributor NHS Inc., told NPR that along with people’s desire to be outdoors, social platforms like YouTube, Instagram, TikTok have brought “great visibility and representation” to skateboarding. The hashtag #skateboarding has 9.7 billion views, #skatetok currently has 171 million views, and #skatergirls has 44 million views.  Of course, Nathan Apodaca was one of last year’s biggest viral stories—and not only did the video of himself longboarding to Fleetwood Mac’s “Dreams” make OceanSpray’s cranberry juice fly off the shelves, but it is the same for boards. According to skateboarder Ruby Media, who is involved in the skate community on TikTok, her family’s local skate shop in Venice, California, saw a surge in business after Apodaca’s video came out, with people mentioning “Dogface” as their inspiration. Meanwhile, girls are also driving the revival in skateboarding. Kendall cited that “there are more female skateboarders now than he’s seen in more than 25 years in the industry.” Recently, six-year-old Paige Tobin from Australia went globally viral after a video on Instagram showed her “dropping into a skate ramp while a young boy looked on in amazement”—generating  1.4 million views. Since the age of two, Paige has won the King of Concrete skateboarding competition in Melbourne and has scored a handful of sponsorship deals with S1 Helmets, Pride Socks, and Fringe Skateboards. One lecturer at USC told CNN: “Those kinds of moments are when people see that skateboarding is for any age and any background. It shows that skateboarding is globally accessible.” 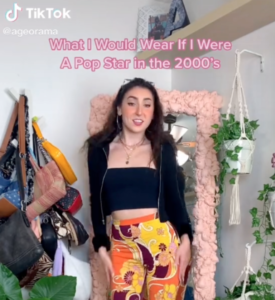 We’ve told you how the 2000s have been back for some time now—and it’s recently made its way into a new trend on TikTok which has users dressing up in various Y2K-inspired outfits to the audio of Britney Spears’ 2008 song “Circus.” It all started when creator Adrienne Reau (whose @ageorama account has 251.6K followers) shared a video sponsored by Free People, that received 78.6K views, of herself wearing different pieces of clothing and accessories from the brand like flared jeans to platform flip-flops. Other users have since recreated the trend with their own Y2K-inspired pieces and videos, using the hashtag #2000sfashion, which has 91.5 million views, as well as #y2kaesthetic, which has 230.3M views. Some videos were tagged with the #freebritney hashtag as well, which has million views—and recently gained traction again following the premiere of the NYTimes and Hulu documentary chronicling her ongoing conservatorship battle. Has. In one video, a user is spotted wearing Britney’s iconic “Dump Him” t-shirt that the popstar wore in a famous paparazzi shot. 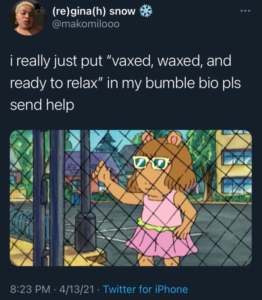 People Are Ready to Be “Vaxed and Waxed” This Summer

After a long year of being stuck indoors, young people are ready to get outside again for the summer, especially as more of them start to get vaccinated. And of course, they have a new motto ready to go. While 2019 was all about having a “Hot Girl Summer” (Thanks, Megan Thee Stallion!), 2020 was the year “of staying home, wearing masks, and social distancing,” and 2021 is looking like it will be the year of being “vaxed and waxed.” On social media, the phrase is everywhere, with users tweeting it, sharing it on group chats, and putting it on their dating profiles to let others know that not only are they vaccinated, but they’re also waxed “and ready to return to the dating scene.” Others are even adding additional silly rhymes to the saying, like “ready to relax” or “ready to play the sax.” The motto has already made its way to etsy where homemade merch like t-shirts and mugs have popped up. Some are crediting the “vaxed and waxed” from the “Snatched! Vaxed! or Waxed!” cold open from SNL, which featured Maya Rudolph. Others are also referring to this upcoming summer as  a “hot vax summer,” with brands and dating apps anticipating the return of young singles going out and about. Previously, we told you about how some young people were using social media as a way to dispel vaccine myths and encourage getting their shots, and combined with the rise in “vaccine shirts,” it’s clear they’re ready to get back to normal—and celebrate this summer. 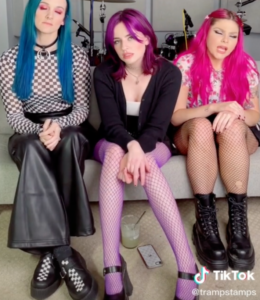 The Tramp Stamps Are Being Accused of Being An “Industry Plant”

Last November, the Tramp Stamps, a Nashville-based band consisting of three young women (Marisa Maino, Paige Blue, and Caroline Baker) with a Y2K-inspired fashion sense and rainbow-colored dyed hair aesthetic that Vox describes as “vaguely riot grrrl meets Mean Girls,” made their debut on TikTok, where they currently have 385.8K followers. They previously shared covers of Blink-182 and Weezer songs, and earlier this month, they debuted their song “I’d Rather Die,” and dropped the music video (which has more than 300K views on YouTube)  last week. The song itself was criticized for some of its lyrics, then multiple users on TikTok began accusing the group of being “industry plants” (a.k.a musicians who present themselves as being homegrown or organic, but are actually being backed or supported by a major label) pointing to their “PR-ready website” and polished Instagram page. One user @hard_cope did a deep dive on the band, in a video that has more than 187K views, and revealed that the lead singer already previously had careers in the solo pop artist and commercial music areas. The accusations and backlash continued to build when other users not only on TikTok, but Reddit and Twitter as well, did more digging and discovered that Maino and Baker had deals with Prescription Songs, which is owned by producer Dr. Luke, who was previously accused of sexual assault by Kesha. Some also dug up several old tweets of Maino where she used racist terms and language. Because the backlash started getting so bad, the band disabled comments across all their social platforms before releasing a statement on Instagram clarifying their backgrounds and roles in the industry, while expressing their anger at cancel culture and several media outlets. The Vox piece questions whether the “dogpiling” is justified, and notable music critics like YouTuber Anthony Fontano pointed out in a video that all the music listeners consume “is almost never 100 percent authentic.” 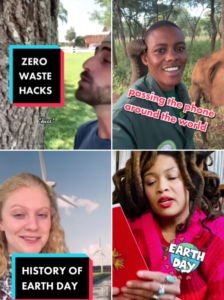 Earth Day was on Thursday and to celebrate the holiday, users on TikTok used the hashtag #earthday (which currently has 4 billion views) to share recycling tips and how they’re supporting the planet.

This comedian/former IKEA employee on TikTok made a now-viral video detailing the “stupid things retail customers say to beleaguered employees on a daily basis.”

Marvel dropped the trailer for Shang Chi and the Legend of the Ten Rings, their first-ever Asian superhero film starring Simu Liu and Awkwafina—and it’s already getting millions of views.

Following in the footsteps of You and Cobra Kai, The Beauty and the Baker is the latest previously-cancelled show to be picked up by Netflix and become a hit.

Pixar put out a casting call for young trans actors to “authentically voice” a trans teen girl for an upcoming movie.

Demi Lovato had an “overblown feud” with an LA-based yogurt shop after she accused them of fueling diet culture.