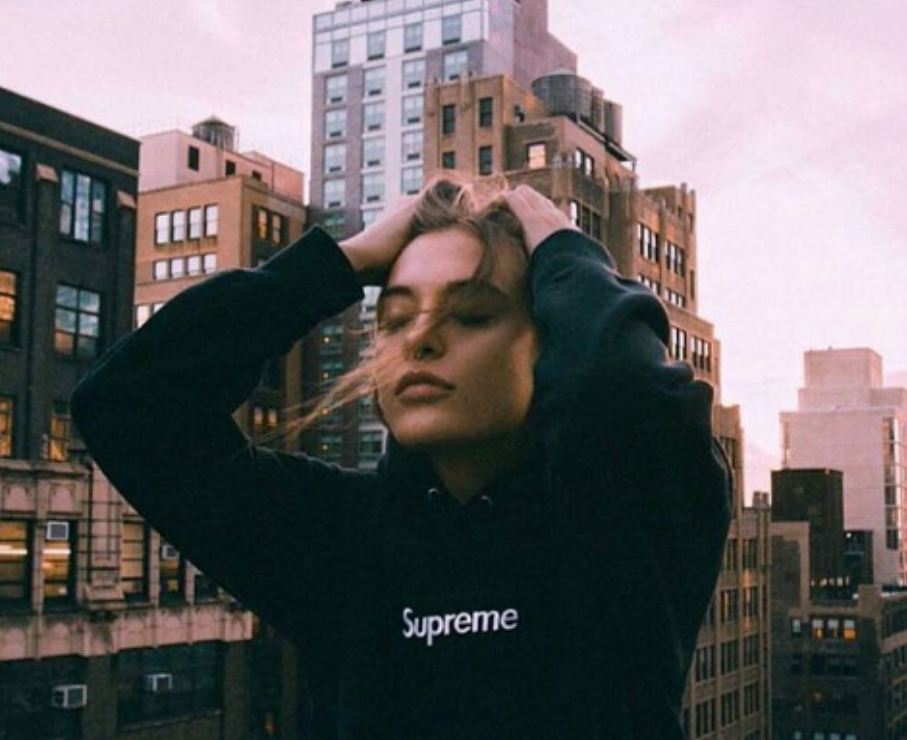 Brandless brands are on the rise, but some logos are still getting a lot of love from young consumers. We asked 1000 13-35-year-olds to tell us what brands they’re most proud to rep…

Millennials and Gen Z have a reputation for not caring much about brands. While there is some truth to this, hope is nowhere near lost. In fact, Ypulse research has found that 78% of 13-35-year-olds consider themselves loyal to one or more brands. The catch is, 72% also say they’re always looking for new products to try. In other words, Millennials and Gen Z are Loyal-ish. They’ll commit to brands, but that’s no guarantee they’ll stick to them—or, as we’re exploring here, sport their logos. To win that honor, brands have to understand that young consumers are no longer swayed by ubiquity; they’re more interested in innovation, aesthetics, and values.

Millennials & Gen Z are becoming conscious consumers, and they’re having a minimalist moment to boot. Many companies are gaining attention, favorability, and wearability with young consumers by downplaying their branding to maximize their Instagrammability. (Think Glossier, Outdoor Voices, Thinx, and Bonobos.)

In response to this trend, Bloomberg declared that “private-label attire in aggregate is now a bigger seller in the U.S. than any single apparel brand.” While this may be true, logomania is also gaining traction. Luxury brands like Gucci and Louis Vuitton are adding an excess of logos to their Spring/Summer 2018 collections, but in a way that is “very self-aware, almost verging on irony,” a Stylebop.com executive told Financial Review. For Millennials and Gen Z, taking part in this “logomania” could be less about exclusivity and more about community and a larger cultural statement.

With all this in mind, we were curious to know what brands Millennials and Gen Z will actually rep today. We asked 1000 13-35-year-olds “What brand’s logo would you be happy to wear on something you own?”* Here are their top ten answers:

What Brand Logos Are They Proud To Wear?

We should note that around 16% of 13-35-year-olds said they weren’t interested in wearing logos, showing that many young consumers are still brand-averse. But removing that from the top ten, there are some surprising and some not-so-surprising answers on this list.

Let’s call out the stand-out response first: Taco Bell. The fast food restaurant is the only food-related brand to make the list, despite many other fast-food restaurants’ attempts to roll out their own apparel lines. What has Taco Bell done differently? They’ve built brand love with a savvy social strategy (remember the giant taco Snapchat lens?) and a cult following in the fast food world (they are, after all, one of Millennials & Gen Z’s favorites). Then they paired up with Forever 21 for a funky line of teen apparel that made our viral list.

Some less surprising results are Apple and Nike, who routinely top the brand favorite lists for Millennials and Gen Z. We often use them as examples of brands that are getting it right for a reason. When we ask 13-35-year-olds their favorite fashion brands, Nike has been at the top of the list for multiple years running, with comfort and quality listed as top reasons for their loyalty. On top of that, the brand also makes the list of non-tech brands Millennials find the most innovative, with those surveyed saying “newness” and “constant improvement” are the attributes that most attract them—the same words used to describe their fondness for Apple. Nike also knows how to engage Millennials and Gen Z on social media, with inspiring storytelling that leverages The Influencer Effect to up their massive following.

Nike, Adidas, and Under Armour also made the favorite fashion brand list. Adidas has long lagged slightly behind Nike in popularity, but last year they appealed to Millennials’ and Gen Z’s proclivity for hyper-personalization by offering the innovative 3D Runner, a shoe designed by taking a full-body scan to construct a customized product for each individual. Under Armour has had a bumpier time with Millennials and Gen Z. Business insider reported that Under Armour is “rapidly losing its cachet” with young consumers, and Ypulse research found that 13-35-year-olds rank the company both as one of their most and least favorite clothing brands. Additionally, a Wells Fargo survey found that the company has a 27% favorability rating. So why did the logo rank so high on this list? Survey respondents seemed to be attracted to it’s minimalist style. One 31-year-old male said, “…it is not super intrusive. If people know what it is, they will be able to identify it immediately, but it’s not a giant advertisement for the brand.” A 21-year-old male said, “It’s minimalistic and is not too flashy.” However, the brand is vastly more popular among Millennials—and males—than Gen Z, which supports Business Insider’s theory that “Under Armour has a huge Gen Z problem:” 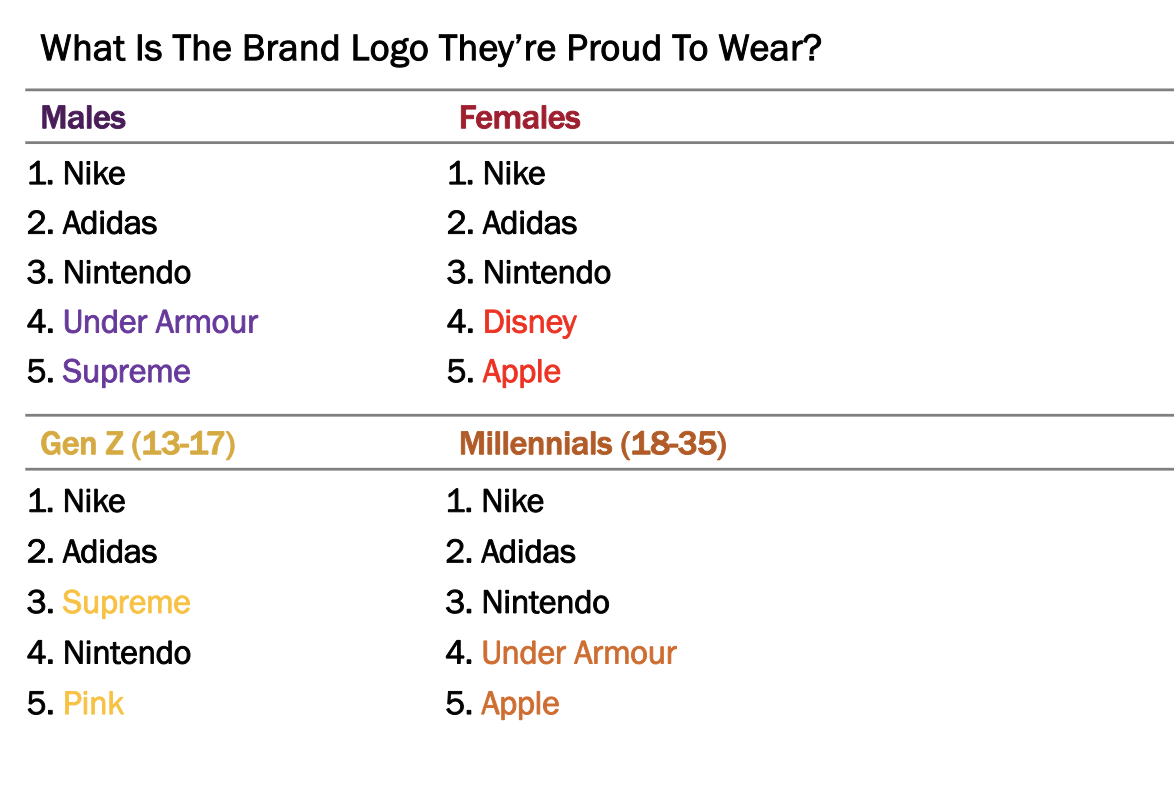 Gen Z, on the other hand, is more likely to sport Supreme, showing that the younger generation is keeping the massive streetwear trend alive and well. The company has been valued at $1 billion and young consumers are flocking to its understated, sporty style. If you need proof that their logo means something to this generation, consider the fact that last year, the company produced Supreme-branded bricks—yes, bricks—that sold out in a day. Originally priced at $30 a pop, the bricks became a viral sensation, later selling on Ebay for $1000 a piece. “Supreme is a brand that not only understands how to capitalise on hype but also how to capitalise on the sheer power of its logo,” Christopher Sanderson, co-founder of London trend forecasting company The Future Laboratory, told The Financial Review.

Though Disney made the top ten across the board, the brand especially resonates with Millennial females. Millennials in general have held on to Disney as part of their nostalgia craze, and a recent brand intimacy report found that Disney took the top spot for the hospitality and theme parks industry. The company has capitalized on this brand love by offering adult-sized clothing and launching strong social media campaigns to make sure Millennials are always in touch with “The Happiest Place on Earth.”

*This was an open-end response question to allow us to capture the full range of brand logos that Millennials and Gen Z say they would be proud to wear—without our preconceived ideas shaping their responses. As with any qualitative question, the responses include those that are top of mind and those that are most popular. The lists are ordered according to number of responses received, and alphabetically when ties occurred.