Yes, the generations known for their healthy ways DO eat fast food. What’s their favorite? We asked 1000 13-35-year-olds, and found some interesting divides in their answers…

Because Millennials have such a reputation for healthy eating—and “killing” chains that are perceived as unhealthy—we often have to remind brands that they do, in fact, eat fast food. Yes, according to Ypulse’s survey on health and fitness, 62% of 13-35-year-olds say that overall, they have a healthy diet. But in that same survey, 84% told us that they let themselves indulge in unhealthy food, and 83% said that they eat at fast food restaurants sometimes, even though they know they’re not healthy. Oh, and the Millennial parents who are boosting organic food buying because they only want their kids to have the very best? Almost 75% of them tell Ypulse they’ll feed their kids fast food.

To find out what the favorite fast food brands of these healthy eating generations actually are, we recently asked 13-35-year-olds, “Thinking about FAST FOOD or QUICK SERVICE restaurants, where you have the option to order your food at a counter or drive-thru, which fast food restaurant is your favorite?”* And their answers told us a lot. Not only are two major brands neck-and-neck for the top spot on the favorites list, but males and females are very divided on where the best fast food is found. Let’s take a look at their top 13 fast food chains overall:

*This was an open-end response question to allow us to capture the full range of fast food restaurants that Millennials and Gen Z say are their favorites—without our preconceived ideas shaping their responses. As with any qualitative question, the responses include those that are top of mind and those that are most popular. The lists are ordered according to number of responses received, and alphabetically when ties occurred.

What Is Their Favorite Fast Food Restaurant?

The tight race between McDonald’s and Chick-fil-A continues: as we saw last year, these two major brands are in a close, close race to be young consumers’ favorite fast food spot, with Chick-fil-A trailing behind McDonald’s by just a few responses. That’s a virtual tie. But when we look at the top favorites by gender and age, we see some even more fast food drama: 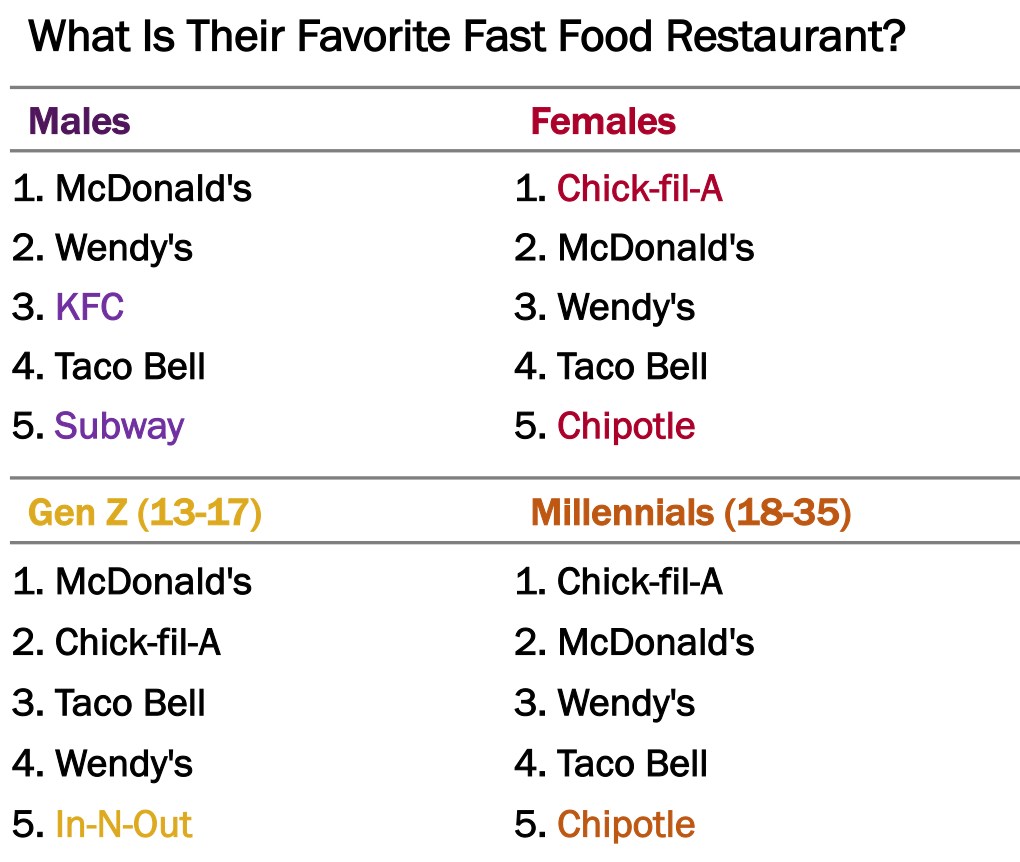 Chick-fil-A was actually the most popular chain among young females, who were far, far more likely to name the chicken-focused brand than young males. For them, McDonald’s came in at number one, and Chick-fil-A didn’t even crack the top five. What does that tell us? Well, on the one hand the brand has some work to do to earn the attention of young males and balance the scales. But at the same time, you could see this as a sign that McDonald’s also has to work harder to capture young female consumers the way the competition clearly is.

We also saw a division between Millennials’ and Gen Z’s favorites, with McDonald’s winning the top spot among the younger generation and Chick-fil-A coming out on top among Millennials. The differences didn’t stop there: Gen Z was more likely to say In-N-Out Burger is a favorite, while Millennials were more likely to name Chipotle.