How Gen Z & Millennials’ Music Discovery Has Changed, In 2 Charts 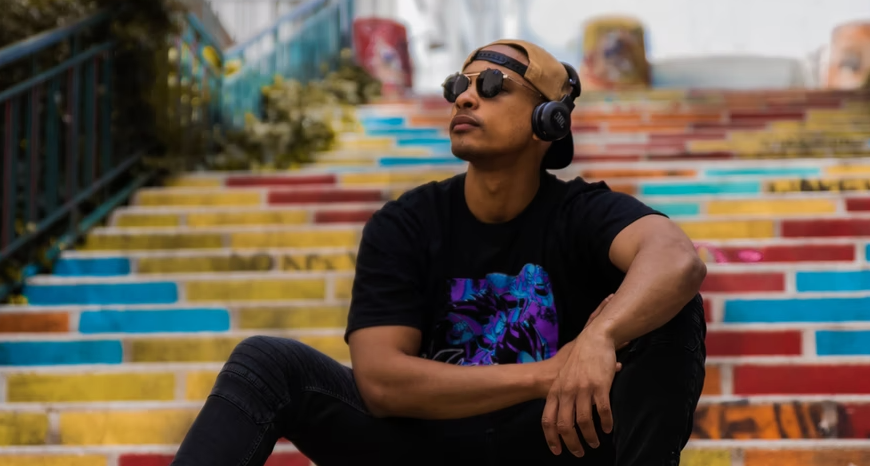 Has the way young consumers’ discover new artists and songs changed through the years? We took a look…

Nearly two years into the pandemic, young people’s media consumption has changed significantly—and that includes music. YPulse’s recent music report takes a deep look at the impacts COVID has had on young people’s music listening habits, the platforms that are emerging as go-to spaces for music listening and marketing, and of course, how they are discovering new music now. The majority of young consumers tell us they’re always trying to discover new artists, so we asked 13-39-year-olds, “How do you find out about new artists or songs?” and compared it to the last three years to see if there were any significant changes. This is what we found: 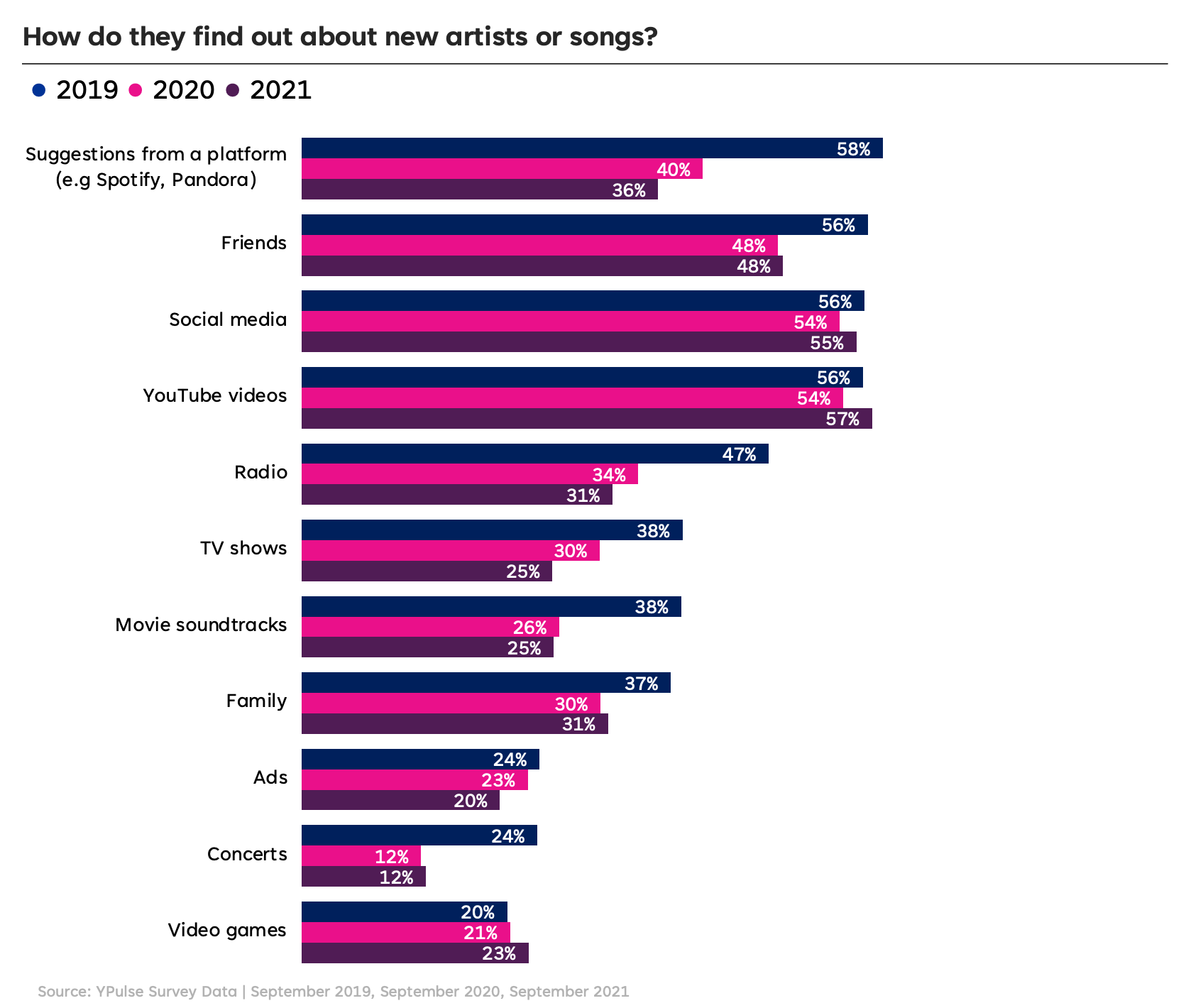 The number of young consumers who use traditional media for music discovery has declined significantly since 2019 nearly across the board—and that includes streaming platforms like Spotify and Pandora. But while music discovery on streaming platforms, radio, TV shows, movie soundtracks, and even friends and family have dropped, Gen Z and Millennials have consistently been turning to social media and YouTube videos to find out about new artists and songs. Sixty-four percent of 13-39-year-olds tell us that most of the new music they hear these days is on social media, while YouTube is the top social media platform they’ve discovered a song or musician on.

Of course, YouTube isn’t the only social platform they’re discovering music on. Instagram (60%) and TikTok (54%) are some of the top places they’re finding out about new artists and songs—and the latter has certainly played a major part in how music is being exposed to younger generations. New studies from MRC Data and Flamingo Group also revealed that 75% of TikTok visitors say they discover artists there, 63% say it’s a source for finding music they’ve never heard of, and 72% associate specific songs with the app, while a Dolby survey asking 2,000 American adults about their music habits, found that nearly half of respondents say they recently discovered a song released more than a decade ago, with 70% of Gen Z saying the same. Almost one-fourth attribute their discovery to a viral video on social media, and respondents also note they are spending more time listening to music now than before the start of 2020, with 55% saying they’re spending more money on music each month. So, there’s no doubt that TikTok has made new (and old) songs and artists go viral. We told you about the new companies that have emerged solely dedicated to making new songs go viral on the app. And even traditional music companies like SiriusXM, Billboard, and MTV are cashing in on TikTok virality by integrating trending content into their own platforms. Universal Music Group entered into a partnership with TikTok earlier this year, so the platform can use songs from their massive catalog of artists. TikTok’s influence is also impacting music festivals, where artists like Tai Verdes, Brooke Alexx, Jaden Hossler (jxdn), DJ Kooze, and headliner Megan Thee Stallion—all of whose popularity has been fueled by the app—have been tapped by popular music festivals, including Lollapalooza. Young music bloggers and music journalists are starting to take over TikTok, and finding massive followings on the app, thanks to their recommendations.

Video games is another area that has seen an increase in the last three years, and are another place that has not seen a decline as a music discovery source. According to the U.S. Music 360 report by MRC Data survey, 28% of music listeners over the age of 13 use video games to discover new music, indicating that it’s just as popular as TV among that demographic for music discovery, while our behavioral data found that 21% of 13-39-year-olds are finding out about new music artists or songs in video games. Specifically, young males are discovering and listening to music in video games, with 28% of 13-39-year-old males compared to 17% of 13-39-year-old females. We told you early on that the future of marketing is in video games, and clearly, it’s where music marketing is happening too. And it’s not going away anytime soon, thanks to the rise of virtual concerts in gaming platforms like Fortnite, Roblox, and Pokémon’s—where many young gamers are likely starting to discover music more and more.

When we broke down where young consumers are finding out about new artists and songs by generations, we found that Millennials’ music discovery mediums have especially narrowed: 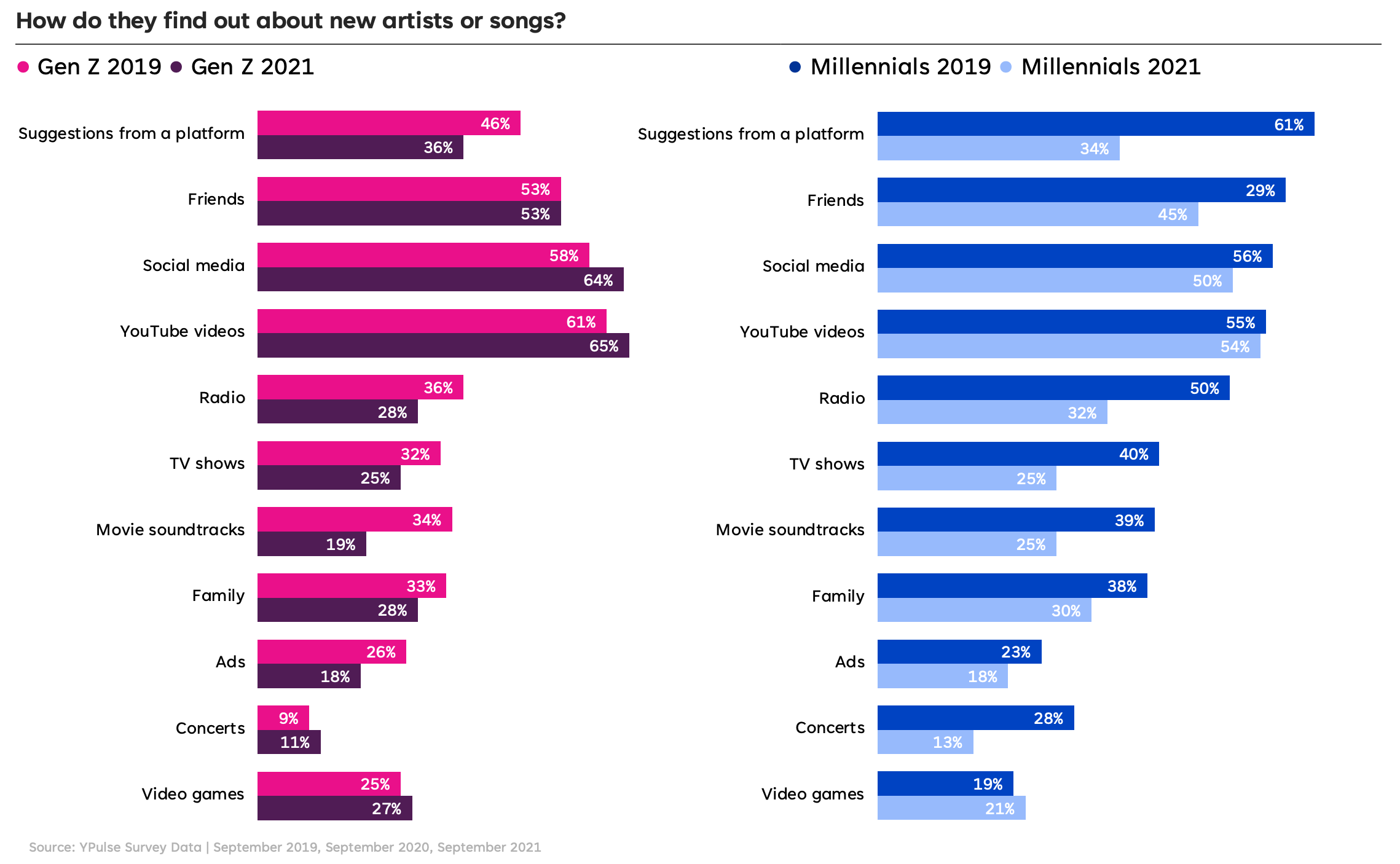 Our music research shows that it’s actually Gen Z (not Millennials) who are leading the way when it comes to finding out about new artists and songs on social media and YouTube. Gen Z grew up on YouTube so, of course, that’s likely where they would be discovering new music as well. But what’s going on with Millennials? Music discovery methods for the older generation have seen steeper declines across a large number of methods. Interestingly, we also reported that the genres of music Millennials enjoy listening to have declined as well. We could be seeing the impacts of their age at work here. It’s likely that many Millennials have reached an age where discovering new music is less of a priority. A 2017 Spotify study reported that music tastes solidify around age 33, and more Millennials are aging beyond that point each year. At the same time, in the past few years Gen Z has become a more dominant force in the music industry, with Gen Z stars like Lil Nas X, Billie Eilish, and Olivia Rodrigo topping the charts and breaking records. We’re not saying all Millennials are tuning out new music, but clearly an increasing number of them are looking to fewer and fewer places to find new songs, hinting that they aren’t as interested in new songs as Gen Z might be.

It’s clear that the way Gen Z and Millennials are discovering music has shifted significantly in the last three years—moving away from less traditional methods and increasingly turning to the places where they frequently spend their time, like social media and video games.

Western Europe
How Popular Are Podcasts in Western Europe? These 3 Stats Tell the Story
Podcasts have been growing in popularity for years now. But how many young European...
North America
Pretty Much Everyone Is Playing Wordle on The Viral List
Wordle (no, it’s not an app) is the new Words With Friends, the Golden Globes Awards ...
North America
Virtual Concerts Aren’t The Only Way Musicians Are Reaching Young Fans
In a time where concerts have become a rarity, some of young people’s favorite music ...