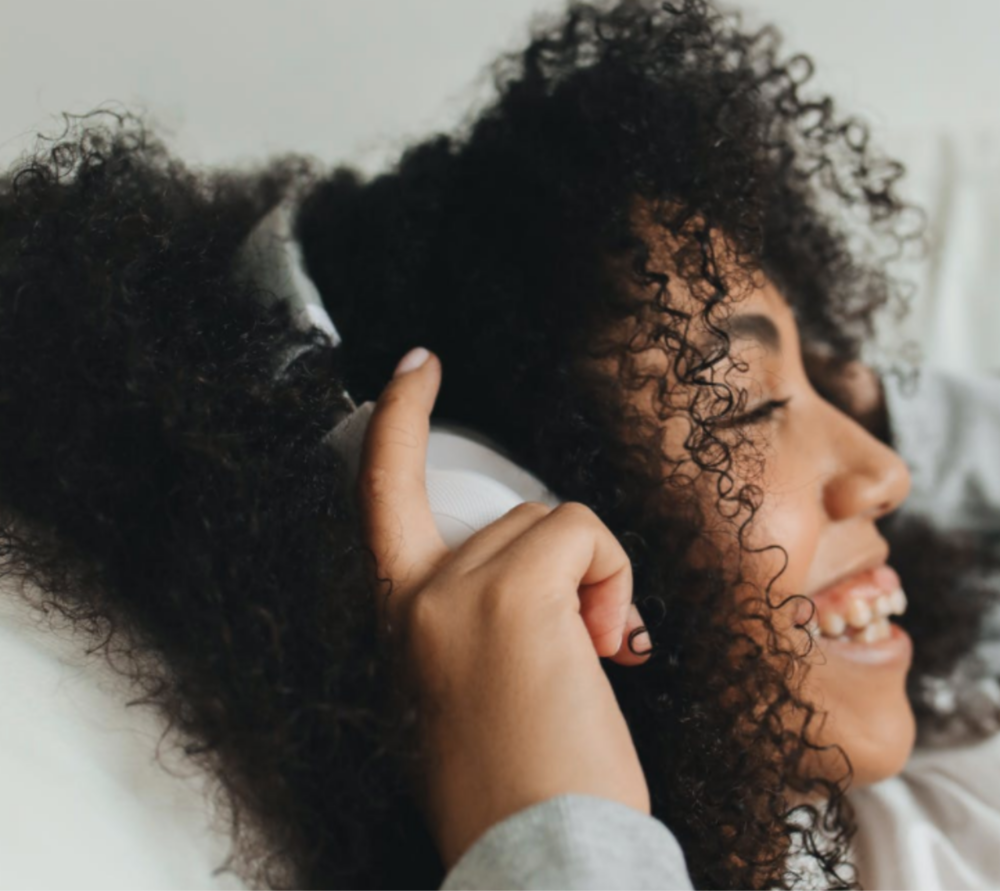 YPulse’s data shows that young consumers are listening to this music genre more than ever, and Gen Z is driving its popularity…

YPulse’s recent music report found that 42% of 13-39-year-olds say COVID-19 and quarantines changed the kind of music they listen to. Headlines have reported that Gen Z is leading the emo and punk revival, and that young fans have continued to contribute to the global explosion of K-pop. But YPulse data shows that young listeners’ music tastes were shifting even before the pandemic.

Our annual music behavioral survey, asks 13-39-year-olds, “Which of the following genres / categories of music do you enjoy listening to?” and monitors the popularity of 28 genres, including pop, alt, country. Tracking their responses through recent years shows the clear decreases in popularity among some genres, and the increase in popularity among one genre in particular: 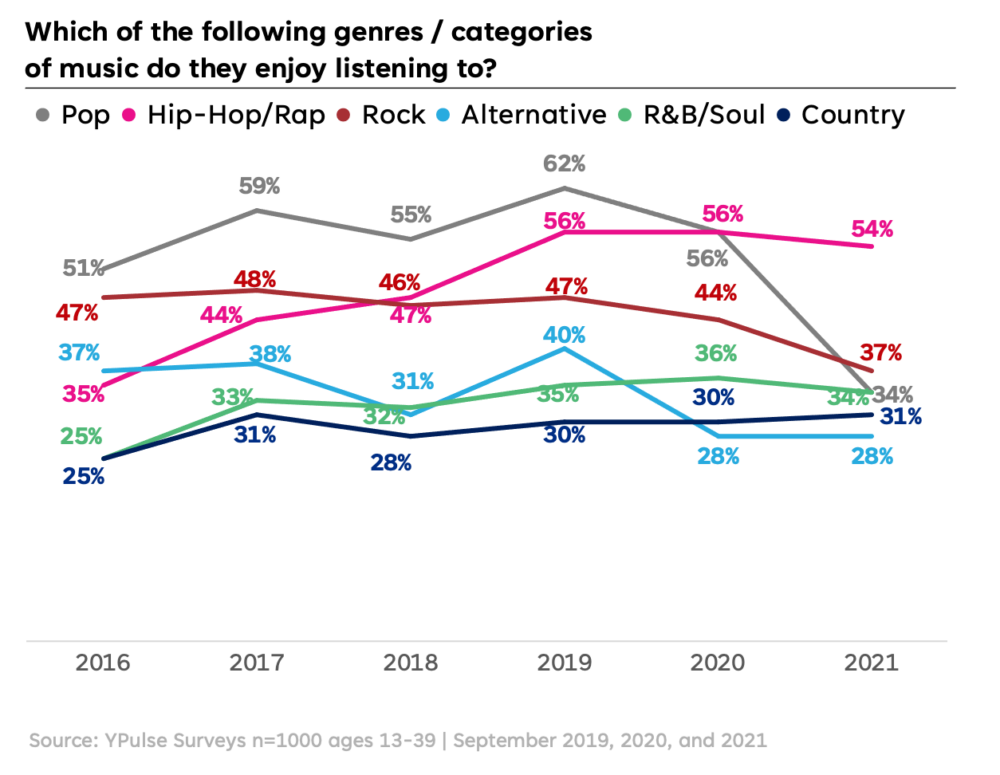 Pop, rock, and alternative have seen the most notable declines in the number of young people who say they enjoy listening to the genres. Three years ago, pop was a top genre with more than half (62%) of young music listeners saying they enjoy listening to it—and now, it’s at 39% for 13-39-year-olds. Instead another genre has taken its place as young listeners’ favorite: hip hop/rap.

The number of young people who say they enjoy listening to hip-hop/rap has increased significantly in the last five years, seeing the most significant spike between 2018 and 2019.. While other genres have faltered during this time, hip hop’s popularity among young listeners only continues to grow. Hip hop artists are also creating major cultural moments for these generations: Draake was named artist of the decade at this year’s Billboard Music Awards and his “Toosie Slide” song (and accompanying dance) quickly became a viral hit on TikTok last year. In September, he released Certified Lover Boy, whose album cover inspired thousands of memes, and quickly rose to the top of the charts. Kanye West’s album Donda, which also came out recently, reportedly broke livestreaming records for Apple when he hosted an event in Atlanta ahead of its debut, and it just hit a billion streams on Spotify and is dominating the Billboard charts. But our data shows that Gen Z is driving the growth in this genre: 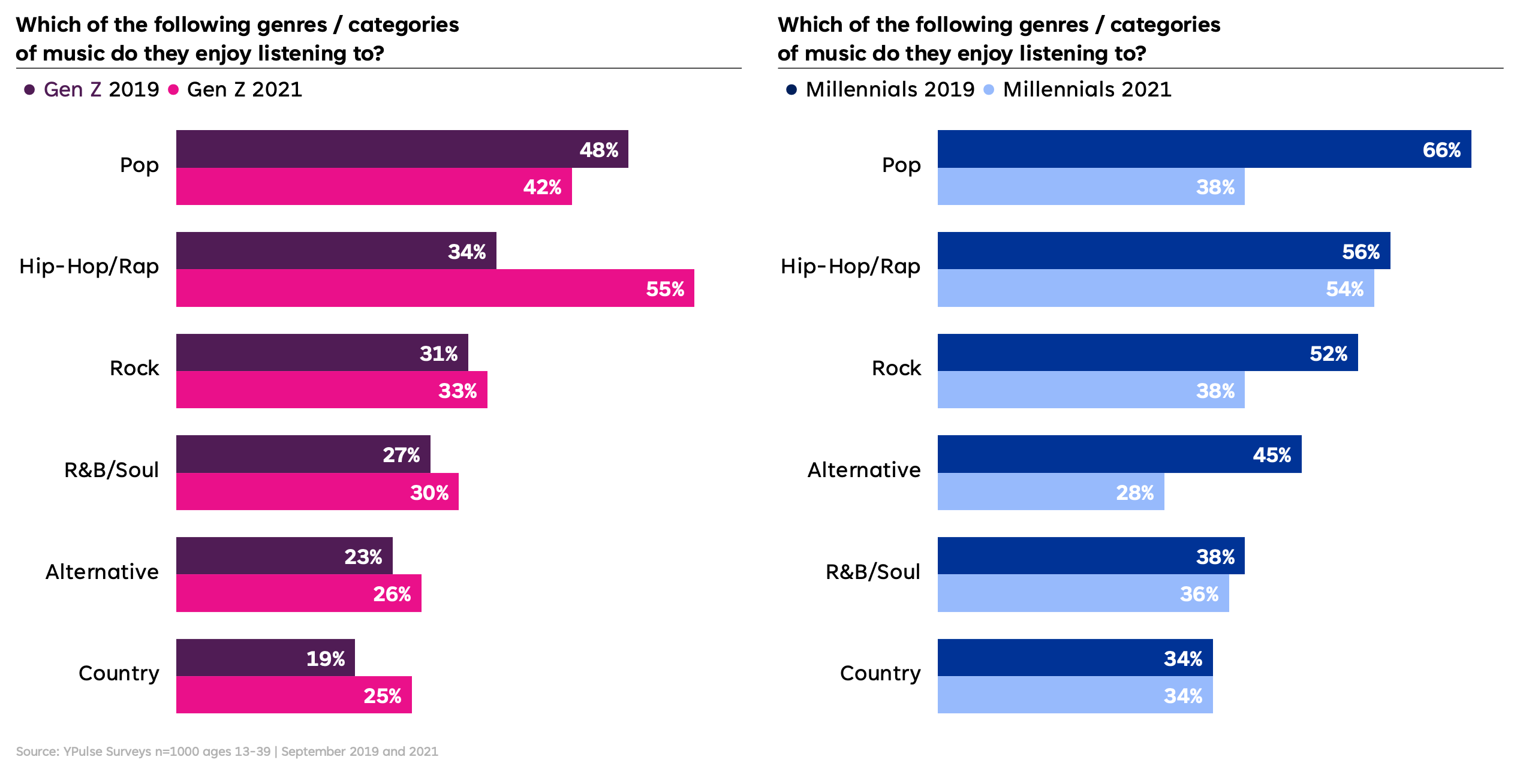 The number of Gen Z respondents who say they enjoy listening to hip hop/rap has increased drastically between 2019 and 2021, while remaining steady among Millennials. We see evidence of Gen Z’s hip hop fandom in their favorite music artist ranking as well: Drake, Eminem, and Kanye West are among the well-known rappers to appear on both generations’ rankings,. but Gen Z was most likely to name Drake as their top artist (compared to Millennials who were most likely to say “None”), and also listed more emerging and established hip-hop/rap artists like Cardi, Lil Wayne, Doja Cat, the late Juice Wrld, NBA YoungBoy, and Nicki Minaj higher on their list.

Interestingly, the decline in popularity in pop and alternative are actually being driven by Millennials, with the number of this generation who say they enjoy these genres dropping significantly between 2019 and 2021. This makes rap/hip hop this generation’s top genre as well, despite the lack in popularity surge it has seen among Gen Z.

But it should be noted that while specific genres of music are seeing popularity waves and surges, there is another phenomenon at play among young music fans: the blending and bending of genres. Our behavioral data actually found that the majority (79%) of 13-39-year-olds say their music taste doesn’t fall into one specific genre or category, while more than half (54%) say music artists of their generation don’t fit into a specific genre. The late Juice Wrld, whose unique emo-rap style seemed to resonate with Gen Z, some of which have leaned into the emo revival on TikTok, is the perfect example of this. So is Kacey Musgraves, whose last two albums, Golden Hour and Star-Crossed, have been praised for its blending of country and synth pop music. The Grammys actually just announced that her latest album isn’t eligible for Best Country Album at next year’s ceremony because The Recording Academy believed it “didn’t fit into the genre.” Then of course, there’s rapper-turned-punk artist Machine Gun Kelly who only recently got into the pop punk scene after first launching his career in hip-hop/rap in the mid-2000s.

In fact, young artists are increasingly pushing against strict categorization of music genres, and their young fans are clearly behind them. So while the increased popularity of hip hop is absolutely a trend to pay attention to, it’s likely that young consumers don’t want their music taste to be constrained, and want the industry, and brands to embrace genre-bending music and artists.

Western Europe
4 Brands Tapping TikTok to Reach Young Europeans
Having a TikTok marketing strategy is a must for brands trying to reach young Europ...
North America
Just How Big Has TikTok Use Gotten Among Gen Z?
No other platform has won Gen Z over as completely as TikTok–and these are the late...
North America
Beyonce Breaks The Internet With Her #AntiWork Anthem “Break My Soul” on The Viral List
TL;DR: Hasbro’s Nerf debuted its first-ever mascot—and the internet is kin...