Like all of their media habits, the pandemic has changed young Europeans’ music consumption, and sometimes in surprising ways. Though most expected a boon in music streaming when lockdowns began, a global study from Carnegie Mellon found that global music streaming declined significantly during quarantines. On average, music streaming decreased 12.5% after March 2020 in two-thirds of the regions studied (including Western Europe), leading Spotify to lose €692 million ($838 million) in revenue in the first three quarters of 2020.

But that doesn’t mean music isn’t still a central component of their lives. In fact, YPulse’s recent WE music report found that nearly four in five 13-39-year-olds in Western Europe agree with the statement, “Music is an important part of my life,” and the majority say they’re always trying to discover new music—but maybe not where they used to. In our recent behavioral survey, we asked European Gen Z and Millennials where they’re finding out about new music artists and songs. Their answers reveal a major shift: 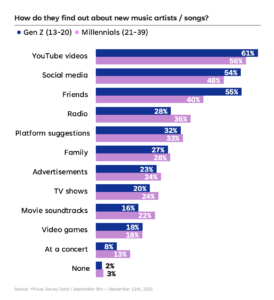 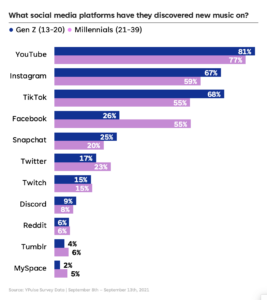 The vast majority of both Gen Z and Millennials in Western Europe are turning to YouTube to discover new music. And indeed, Carnegie Mellon’s report found that while streaming service use declined at the start of the pandemic, video streaming rose—especially among music videos on YouTube. Gen Z and Millennials have grown up on YouTube and spent the majority of their lives turning to the platform for all things entertainment and information, so for these generations it’s a top source for music discovery.

A bigger shift is TikTok, which is Gen Z’s second top social platform for music discovery. Around the world, TikTok exploded in popularity during the pandemic. In the U.K., TikTok’s user base grew from 3 million in September 2019 to 14 million in March 2021, and young peoples’ time spent on the platform doubled—especially among Gen Z. Our research now shows that two-thirds of 13-20-year-olds use TikTok, and the video-sharing platform rivals Instagram and YouTube in use and popularity—and music discovery. Now, TikTok is rising as a major music industry player. The app has organically helped emerging (and old) songs go viral and launched the careers of many young artists, which has prompted brands (and artists) to intentionally seed the app’s viral hits. Drake, for example, commissioned a TikTok dancer to choreograph a new move based on his song “Tootsie Slide”—which hadn’t even been released yet. The dance—and the song—went viral three days before it officially dropped. Then there are brands like Songfluencer, which collects data from the app to “quantify the value of influencers” and analyze the paths of TikTok hits, which has attracted major music labels to its client roster. Against the Grain, meanwhile, specializes in creating the challenges, trends, and hype behind viral songs and artists, and has engineered viral music moments for the likes of Snoop Dog and MASN. And Creed Media identifies and brings influencers in to promote tracks using organic trends on the app, “operating more like a jiu-jitsu fighter redirecting an opponent’s momentum for his own gains.” With all this influence, it’s not hard to understand why TikTok is now a top source of music discovery for young consumers.

North America
This Adele x Megan Thee Stallion Mashup Has the Internet in Tears, on The Viral List
A meme of Megan Thee Stallion dancing to Adele’s “Water Under the Bridge” is racking ...
Western Europe
The 15 Coolest Brands, According to European Gen Z and Millennials
It’s not easy to win the title of “cool” from young European consumers. We checked ...
North America
3 Things Young Consumers Want From Brands For The Holidays
It’s officially the holiday season. What exactly do young consumers want from brand...