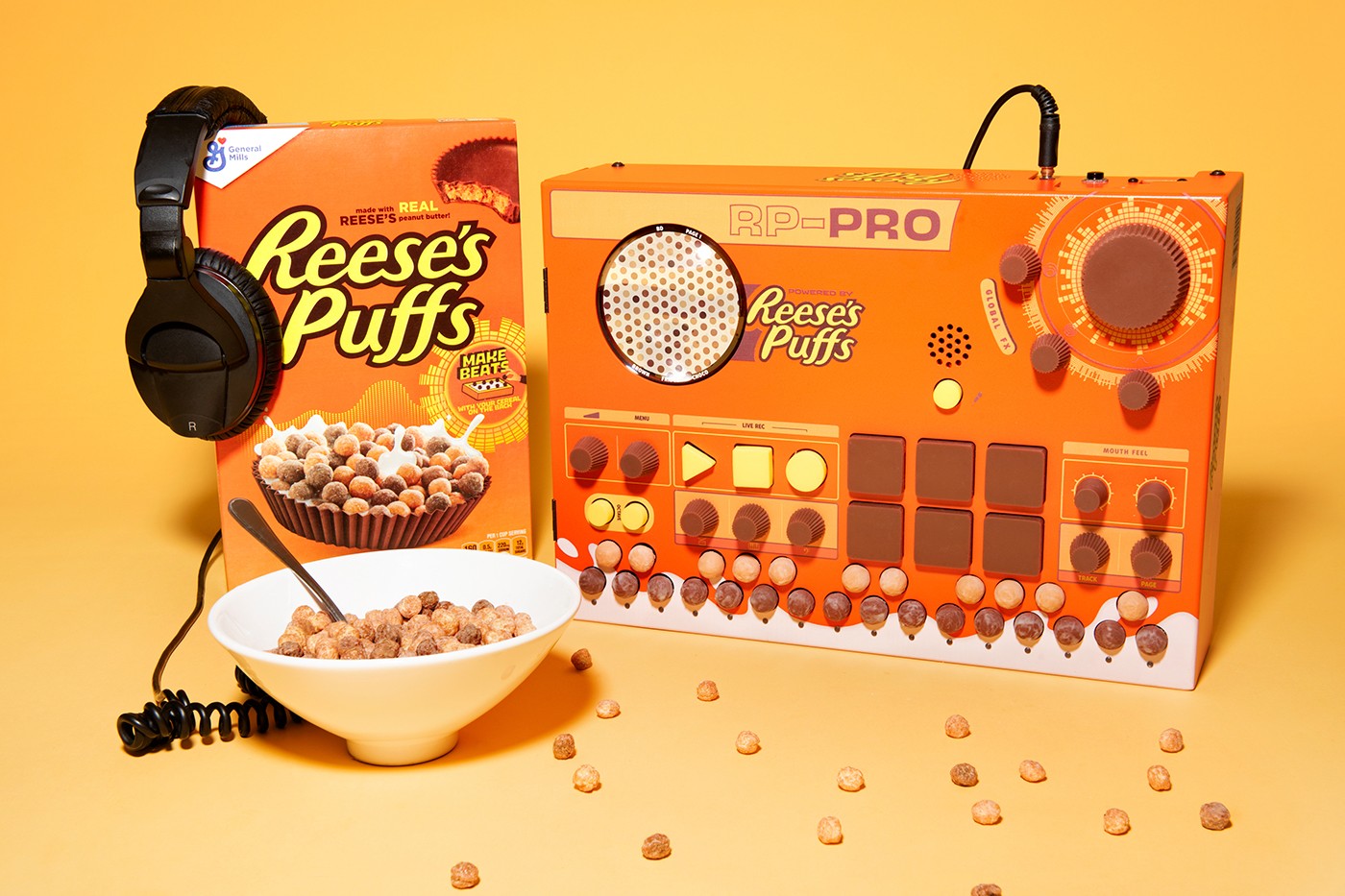 Brands’ packaging that gives access to digital experiences is a marketing trend that seems to be popping up everywhere. But are young consumers actually interested in it? We asked…

We’ve told you for years now that brands need to have an augmented reality plan to reach young consumers. Digital-only clothing, post-makeup beauty, and AR influencers are all concepts that have been emerging in recent years—and have been accelerated by the pandemic. YPulse’s recent shopping and retail behavioral report found that 79% of 13-39-year-olds are interested in augmented reality try-ons, so, clearly, the interest in the shopping space is there. But an avenue where AR and other virtual and digital experiences seem to be popping up more frequently is directly on brands’ packaging.  According to Forbes, connected packaging is “the transforming of regular packaging into a digital experience, by scanning, tapping or pointing with their devices to provide a whole new way for brands to connect with customers.” Recently, food and beverage brands have been leaning into the trend especially hard: Reese’s Puffs and Oreo launched interactive retro packaging where customers could trigger special music boxes or mixtapes with AR, while Campbell’s partnered with Universal Music Group to release musically-connected soup cans with QR codes that unlock exclusive songs by specific artists. Snapchat has also played a major role in making AR more accessible for brands: For instance, Ben and Jerry’s partnered with Snapchat for an AR festival that customers could only attend using AR on their Peace Pop ice cream tubs.

Of course, the trend of AR on packaging or logos isn’t entirely new. From animated narrative stories to bringing their iconic polar bear mascot to life to being one of the first brands to utilize Snap’s AR Lense feature, Coca-Cola has been playing around with the concept for some time now with their Coke cans. Recently, their Sprite brand featured QR codes that unlocked a series of virtual concerts. Meanwhile, wine brand 19 Crimes is known for their Living Wine Labels that allows drinkers to use AR to make their labels come to life, a feature they launched in 2017 and has wowed customers ever since. But how many young consumers are actually interested in engaging with branded packaging to activate these digital experiences? To find out if this is a marketing trend that just marketers love or actually reaching Gen Z and Millennials, we recently used our on-demand survey platform PULSE to ask 16-34-year-olds to ask, starting with if they have ever seen brand packaging digital packaging on any products: 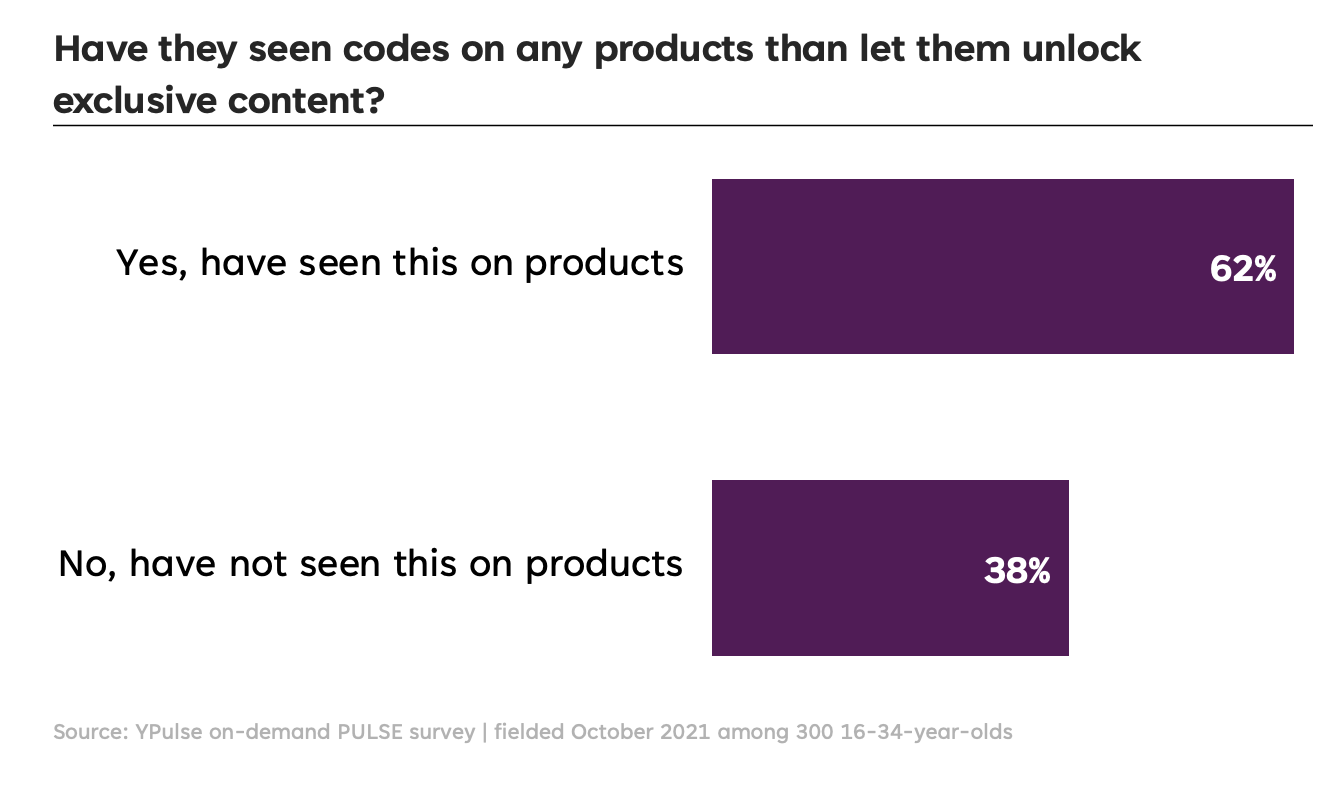 Specifically, we asked “Lately, some brands have tied their packaging to digital experiences. This can be a regular code on the package that lets them unlock an exclusive website or QR code that takes them to AR experience. Have you seen this on any products?” More than half (62%) of 16-34-year-olds say they have seen codes that allow them to unlock a digital experience on products, indicating that packaging with digital additions are actually getting young consumers’ attention. We just told you about some of the ways some major snack and beverage brands (like Coke, Sprite, Reese’s Puff, Oreo, and Ben & Jerry’s) have  leaned into putting AR and QR codes on their packaging as a way to engage customers. So now we know that these codes are being noticed, but are they actually interested in seeing them? And even more, have they used any?: 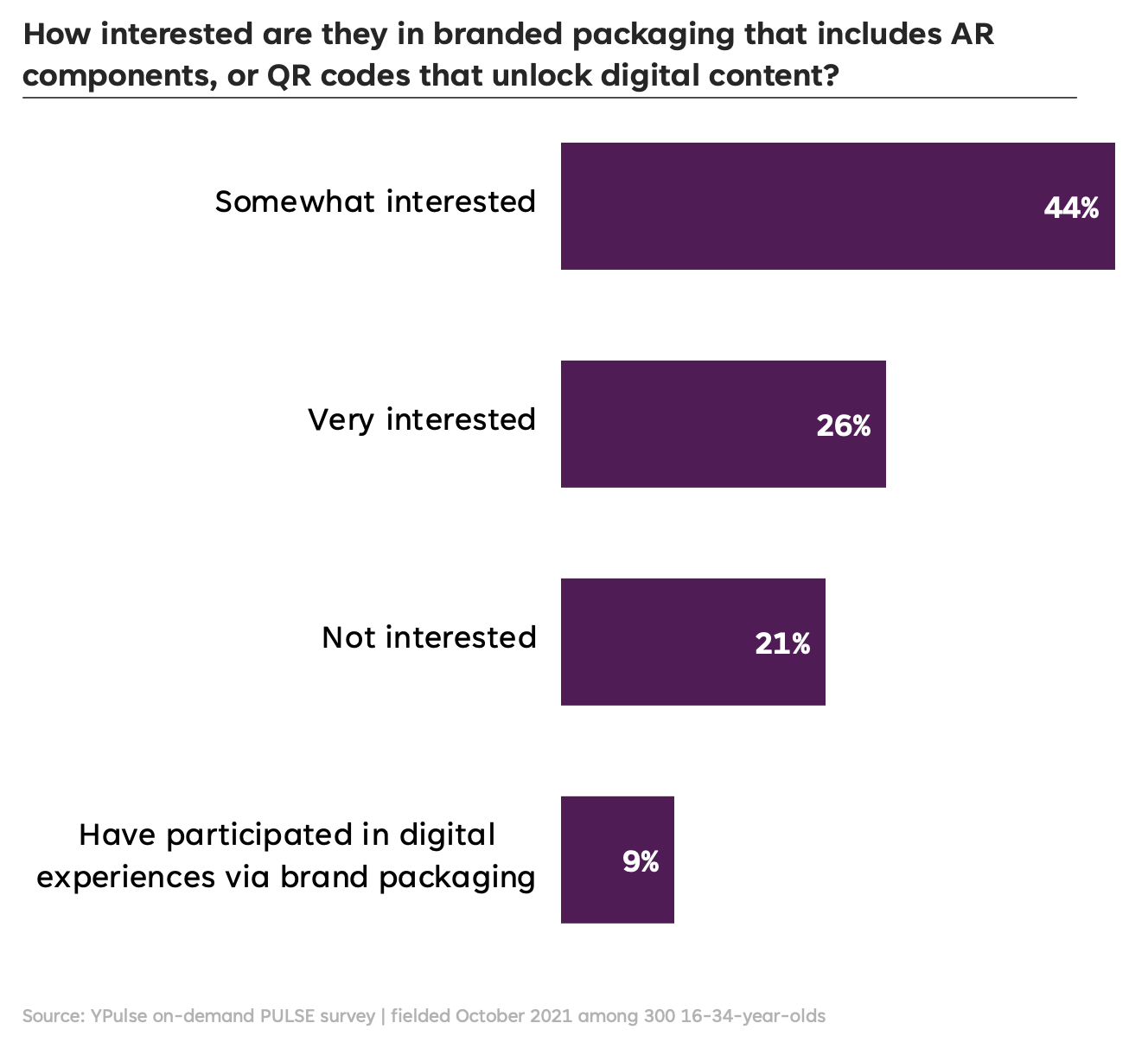 The reality is that a very small percentage of young consumers have actually participated in a  digital experience via brand packaging. For brands, this means that whatever content lives on the other side of that packaging code should probably be used elsewhere as well to reach a bigger audience. That said, there is good news: plenty of young consumers are actually interested in these digital experiences: 26% say they’re “very interested,” while 44% say they’re “somewhat interested” in them. But of course, the type of digital experiences on the packaging most likely plays a part in how interested (or not) they are. You already know about the array of experiences out there, but which ones are they most likely to interact with? 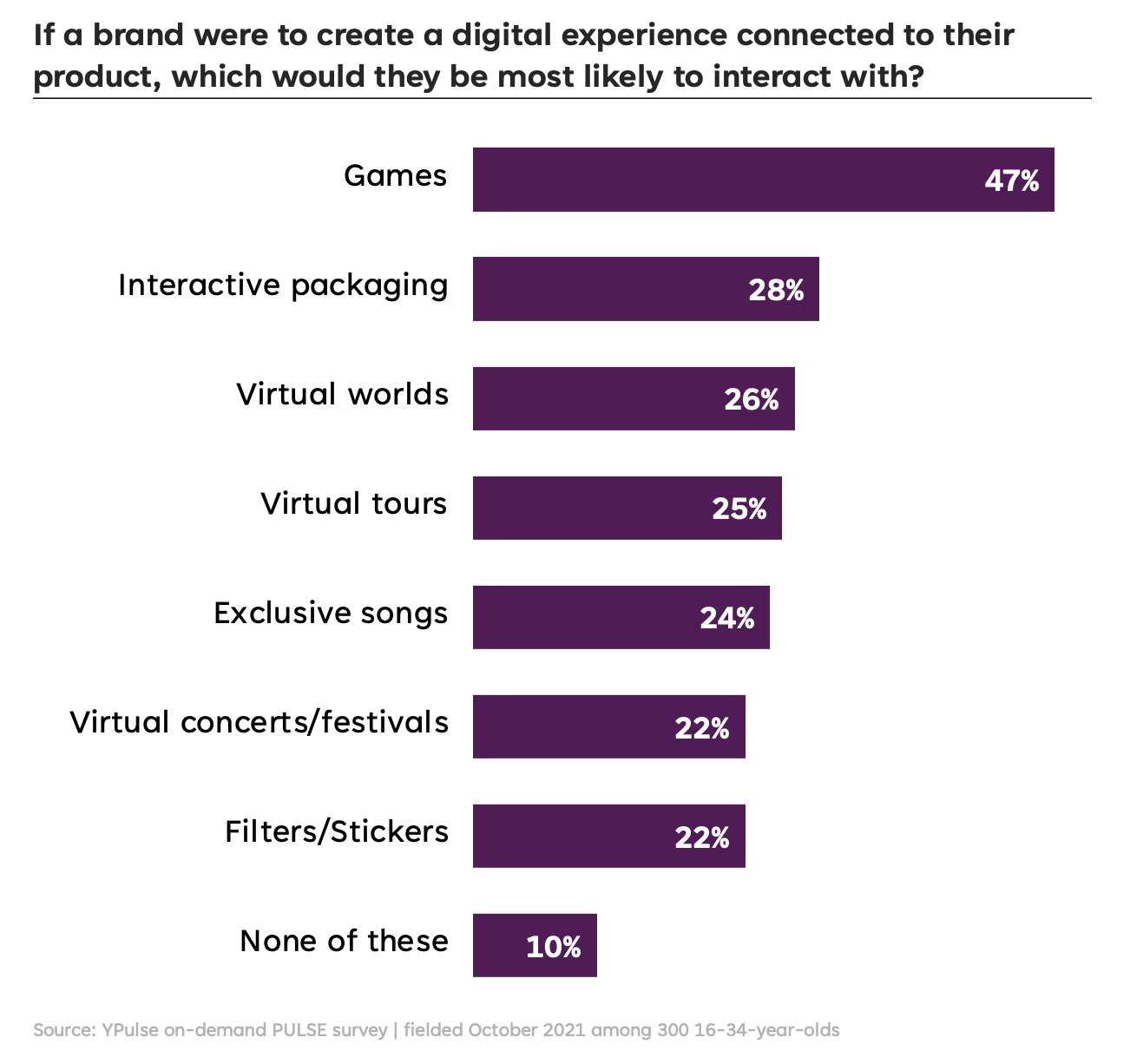 More than half of 16-34-year-olds tell us that games are a digital experience they’re most likely to interact with if they were to see it on a product’s packaging—and lots of brands have tried to reach them this way. In 2017, Wise Foods developed a baseball-themed AR game where customers could scan a “zapcode” on packs of their foods and “hit” balls thrown at them by a virtual pitcher, while Lego previously launched a Scooby Doo-themed AR game that could only be activated by using their smartphones on their Scooby Doo sets. Even DirectTV recently got into the trend during their recent campaign for DirectTV Stream, by letting users trigger an interactive game (where they play alongside the Wondrous Serena fighting “ball-launching robots”) using Snapchat’s AR Portal by scanning posters from the company.  Of course, there’s a reason that games have the highest interest among our respondents. Our last gaming behavioral research found that 94% of 13-39-year-olds play video games in some capacity, and the majority of young gamers feel that brands should be paying attention to gamer culture. Next up, nearly 30% of 16-34-year-olds say they would interact with interactive packaging, and we’ve already mentioned Reese’s Puffs and Oreo, which merges the concept of gaming and interactive packaging into one—by allowing customers to turn into DJs by creating musical beats and crafting digital mixtapes through their interactive packaging on limited-edition packs.

Around a quarter of young consumers say they’re interested in virtual worlds, virtual tours, exclusive songs, virtual concerts/festivals, and filters/stickers. Jack Daniels previously used AR for their product packaging to share their history and educate drinkers on the whiskey-making process “using a pop-up book style aesthetic,” and lets them go on a virtual tour through the Jack Daniel distillery. According to the Modern Media Director of the whiskey brand, it is important for brands to “reach fans and consumers where they are” through sharing content that’s unique, interesting, and relevant through “a variety of digital mediums.” Meanwhile, Ben & Jerry’s, Sprite, and Campbell’s are making a play for music fans’ hearts through connected packaging as well. Ben & Jerry’s customers were able to attend a virtual summer festival stocked with ice cream vans and performances by scanning their “Peace Pop” ice cream pints on Snapchat, while Sprite hosted a Live from the Label concert series where customers could attend and receive giveaways by unlocking QR codes on their special 20-ounce bottles.

As mentioned, Snapchat has played a big part in the AR space, by partnering with brands to reach more young consumers through AR, but other platforms and apps have been emerging to help make brands’ packaging more fun—and virtual. For instance, Swigr is an AR app which developed a Space Invaders-style game that users can activate on specific alcoholic beverages’ cans. There are plenty of opportunities and a myriad ways that brands could create their own package. But there should be awareness that while interest is strong, most are not actually interacting with these campaigns, so more incentive to engage might be needed.