Social media is influencing  Millennial parents in numerous ways. Here are four stats that show how social is shaping their choices…

There is no question that social media is shaping Millennial parenting in a variety of ways. Here are four stats that explore how social media is impacting their decisions, purchases, and more: 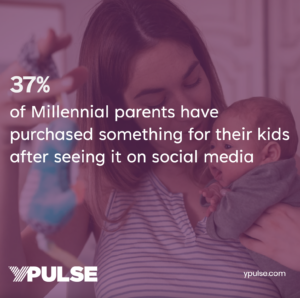 A third of Millennial parents have bought something for their kids that they saw on social media.
Perhaps more than influencing their parenting styles, social media is influencing what and how Millennial parents buy. Thirty-seven percent of Millennial parents say they purchased something for their kids after seeing it on social media—with moms even more likely  to say they have done this than dads. For this generation, social media is a marketplace, and for this generation of parents, it’s become a preferred way to shop. ​​YPulse’s shopping and retail report found that 58% of Millennial parents would rather buy something they see on social media than browse for items on retail sites. They’re also more interested than non-parent Millennials in social shopping, or being able to purchase items directly from social media feeds like Instagram, Facebook, Pinterest, etc.—69% of Millennial parents tell YPulse they want to be able to shop directly on their social feeds. Convenience is the name of the game here. Millennial parents are overwhelmed and busy, and having product recommendations appear on the social feeds they’re already visiting is a shopping shortcut they’re welcoming. Examples of viral products that have seen sales booms because of social are everywhere, and Millennial parents are helping the trend, snapping up toys and other products they’re learning about on social feeds: The WSJ dubbed Pop Its, which mimic the sensation of popping bubble wrap, the “toy of the pandemic,” and  #fidgettoys on TIkTok has more than 14.2 billion views. FoxMind, which is the original maker of Pop Its, reports that the toy has grown from selling 700,000 units in 2019 to seven million between 2020 and 2021. Stuffed and plush toys like Moon Pals and Squishmallows have also seen an increase in popularity on social media, which has translated to sales. Then, of course, there’s the Nugget play couch, which developed a “cultlike following” with moms spreading the word in Facebook groups, and the product’s limited restocks are treated like a “Supreme drop.” 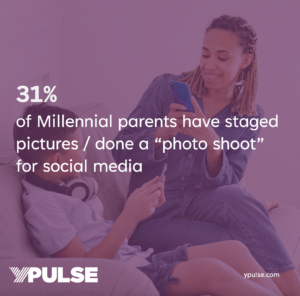 Nearly a third of Millennial parents say they have staged pictures or photo shoots with their kids to share on social media.
Thirty-one percent of Millennial parents say they staged pictures / done a “photo shoot” to post to social media. This number jumps to 36% among Millennial moms, who are spending more time on social platforms than Millennial dads. Our data also found that 17% of Millennial parents have thrown a “Pinterest perfect” birthday party for their kids. It makes sense that a generation that has grown up sharing their own lives on social would continue to share their parenting lives there as well, but the “staged” and “perfect” elements of these shared moments are something to examine. Social media creates a pressure and brings out the instinct to compare yourself to others, no matter what your age and life stage. Parenting on social media, where influencers and their perfectly matched and coiffed kids seem to have it all together and everything can be filtered and curated to death, has created something of a perfect parent syndrome. It’s clear that some Millennials feel the pressure to create and post “perfect” moments and idealized versions of family life to make it seem like they too are managing to have it all. Things like Pinterest perfect birthday parties and mini me clothing sets are direct impacts of social media on parenting. Some Millennial parents are also actively creating a social presence and persona for their kiddos, with 15% reporting that they have started a social media account dedicated to their kids. But the perfection pressure social media has created for Millennial parents has another side: they’re very appreciative when people are honest about how difficult parenting actually is, with 89% saying they like when people are honest about how hard it is to be a parent. On TikTok, more real and authentic glimpses at parenthood are increasingly popular, and just recently #UglyBabies and #MomBods were both trending on the app. 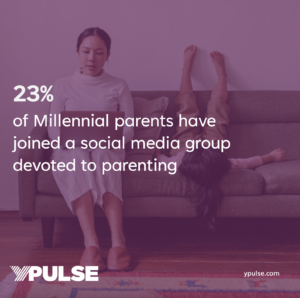 A quarter of Millennial parents have joined social media groups dedicated to parenting. 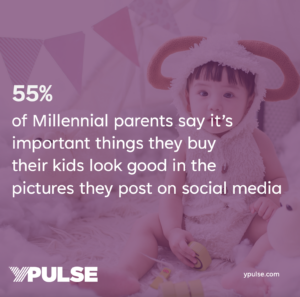