With more young consumers turning to streaming services without traditional advertising, brands are finding ways to reach them there with original programming…

There is no question that young viewers have moved away from traditional TV and ushered in the era of ad-averse streaming services. YPulse’s TV and Entertainment report found that 68% of 13-39-year-olds watch TV shows on streaming services weekly or more, while 44% watch TV shows via cable at the same frequency. For years, brands have been experimenting with ways to get young viewers to pay attention to TV ads, but as those young audiences have flocked to platforms with no ads at all, there’s been a scramble to find ways to reach them beyond traditional commercials. After all, YPulse found that 69% of 13-to-39-year-olds use streaming services to avoid ads, and the ”solution” could be “having advertisers create their own content for the new on-demand services.” According to the WARC, the amount that advertisers spent on broadcast television last year declined 10% from the previous year, while online video spending increased 12%. A lot of that money went towards streaming services like Hulu, YouTube, and Peacock, and Netflix still remains unavailable to traditional marketing.

Of course, one way to get young viewers attention outside of ads is to create the entertainment they’re consuming instead. Some brands have already been producing their own branded reality shows, but many have also been releasing full-length documentaries and features. Perhaps, one of the earlier successful examples of this is Pepsi, who produced 2018’s Uncle Drew, centered on NBA player Kyrie Irving and his character from a series of old Pepsi Max commercials. That movie raked in $42 million—and marked “one of the first branded entertainment campaigns to be adapted into a major motion picture.” NBC Sports made a similar move last year by producing the Jason Sudeikis-led Ted Lasso on Apple TV+, which was based on the character from their commercials. Now, more brands are working with movie studios to get creative with how they advertising to consumers—here are four more bypassing traditional ads and creating entertainment to reach young viewers instead: 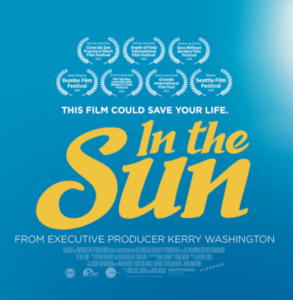 Neutrogena
Earlier this month, the Johnson & Johnson-owned skincare brand launched their first brand studio to produce original programming to inspire consumers and educate them on taking care of their skin. Their first documentary, In the Sun, produced by actress Kerry Washington, showcases the long-term effects of sun exposure on the skin. The movie itself focuses on people who are battling skin health challenges or have been affected by skin cancer, and centers on Dr. Chi on “her mission to educate and treat patients while balancing how to protect her own children from the sun.” Neutrogena Studios also teamed up with the Ghetto Film School to launch the First Frame program, which will enlist Gen Z filmmakers to create short films aligning with the brand’s mission. 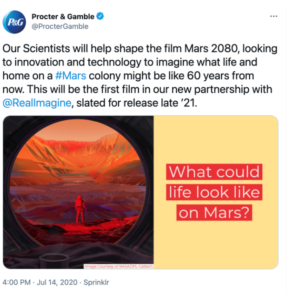 Procter & Gamble
We told you how old brands have reinvented themselves and in the last year, the 183-year-old company has been everywhere from TikTok with their #DistanceDance campaign to Animal Crossing. Last summer, they also announced that Procter & Gamble was teaming up with Ron Howard’s production studio Imagine Documentaries for “a slate of film and streaming projects.” The first project is Mars 2080, a future-set feature that follows “a family’s commute from Earth to the red planet and adjustment to their new habitat” which is currently in development for theaters with a release date projected for later this year. Meanwhile, the company also partnered with Stone Village Television to release a scripted series focusing on gender equality, diversity, and inclusion. 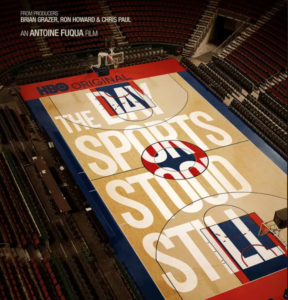 Nike
Nike is ranked as the coolest brand among Gen Z and Millennials and it was one of their top brands leaving 2020. They’re clearly always finding ways to stay relevant with their young fans, from launching a resale program for sneakers to developing a new social commerce app. And now they’re making content too. The athleticwear giant’s production company Waffle Iron Entertainment recently teamed up with the NBA and Imagine Entertainment to release the documentary The Day Sports Stood Still on HBO and HBO Max, which focused on the shutdown, the “pandemic bubble,” and the overall impact of Black Lives Matter on the league. While Nike co-produced the documentary, it is “infused with Nike’s ethos but carries none of the traditional branding audiences are used to seeing.” According to Imagine Entertainment’s co-founder Brian Grazer, the best kind of partnership is one where the themes between the company and the story are aligned: “If you’ve got Chris Paul and Nike as part of the marketing, that is an added ingredient why someone will see it. They will feel Nike endorsed it and Nike does good things.” 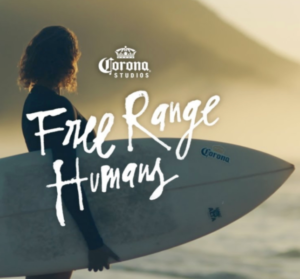 Corona Beer
In the last year, alcohol brands have continuously been coming up with ways to stay relevant with young drinkers. And in November, the beer brand launched Corona Studios, an in-house production studio, focused “on creating quality entertainment at a regular pace.” The first project they launched under their new studio was original series Free Range Humans, which followed eight individuals who left behind their comfortable, white-collar jobs to instead pursue a life full of outdoor adventure from a Brazilian PR associate-turned-surfer or an English architect who shifted into becoming an ocean advocate. Global VP of Corona Felipe Ambra told Campaign that when it came to making the decision to debut a: “When we look at the way the world is evolving, we need to start entertaining instead of interrupting consumers. That’s the biggest challenge marketers face: engaging consumers in an authentic way.”

North America
The Top Movies Young Consumers Are Excited to See This Summer
Which movies will be bringing Gen Z and Millennials back to theaters this summer? W...
North America
Young People Are Saying Goodbye to the iPod on The Viral List
TL;DR: RIP, iPod—Apple is going to discontinue making the devices after ne...
North America
7 Ways Brands Are Authentically Supporting LGBTQ+ Youth—Beyond Advertising
From podcasts to inclusive social media campaigns, here’s seven brands supporting L...