The 17 Biggest Pop Culture Moments of the Year, According to Young Europeans 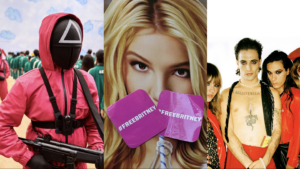 What pop culture moments do Gen Z and Millennials in Western Europe consider the biggest of the year? We asked…

In YPulse’s upcoming WE Pop Culture Redefined trend report, we went deep into the pop culture moments European Gen Z and Millennials are paying attention to—and how they’re reshaping the very definition of a pop culture moment. Where brands used to be able to rely on a predictable media calendar to create campaigns around a set list of events that most young people would be paying attention to, today’s young consumers are creating a whole new set of rules for how brands can—and should—reach them. At the heart of this, of course, is the organic, ephemeral, and unpredictable influence of social media, which is spawning trends faster than ever before and creating a more challenging media landscape for brands to traverse. Now, the name of the marketing game is knowing how to catch the trends as they come—and that means knowing what to look out for.

So what pop culture moments are young Europeans paying attention to? In our trend survey, we asked 13-39-year-olds across Western Europe the open-end question, “What is the biggest pop culture moment of the last year?” Here’s what they had to say:

While arguably the pandemic isn’t exactly a pop culture moment, “COVID-19 / lockdowns” is by far the top phenomenon young Europeans listed as the biggest moment of the past year. And we get it—it’s practically impossible to consider the past year (or two) without contemplating the influence of COVID. More than that, many of 2021’s most prominent trends were at least partially spurred along by the pandemic and lockdowns, including many that young Europeans say were the biggest. Concerts / music festivals, for example, take second place on the list. While in a normal year the Lollapaloozas and Tomorrowlands of the world are certainly big events, they may not stand out as much as they did in 2021, when many festivals and concerts opened again for the first time in over a year (though not always without widespread COVID outbreaks). At the same time, when we asked young Europeans to tell us the in-person events they’re most anxious to get back to when the threat of COVID is over, large and small concerts made it to their top three, highlighting how important these events are to Gen Z and Millennials in Western Europe.

Along the same lines, “summer” and “things opening up after lockdowns” also found high positions on their list of biggest pop culture moments, which underscores what a big deal hot vax summer was to young Europeans—even if their hopes of a return to normal were quickly dashed.

Getting more specific, many young Europeans also listed several major events that made their comeback this year after being canceled in 2020: global music competition Eurovision, the UEFA Champions League, and the Olympics. Again, while these would certainly garner a lot of attention during a normal year, young Europeans were particularly excited for their return in 2021. UEFA EURO, for example, was the first major sporting event to resume in 2021, and it gained a massive global audience, even breaking records in U.S. viewership. Eurovision, meanwhile, was an especially big deal this year thanks to Måneskin, the Italian band that won the competition and subsequently took the world by storm. Since winning the competition, Måneskin has become the first Italian rock band to reach the top 10 on the U.K. Singles Chart, reached the top 10 on the Billboard Global chart, and globally sold four million copies of their 2021 album. In short, they were 2021’s breakout hit, and young Europeans count them as one of this year’s biggest pop culture moments.

Squid Game also made their list, the Netflix original South Korean drama that became a global phenomenon when it was released on September 17 of this year, and quickly became young Europeans’ top favorite show. The show also became the No. 1 most popular TV show on the platform a few weeks after premiering, and it held the number one spot globally for 47 consecutive days. On October 19th, Netflix reported that a staggering 142 Million subscribers had viewed the series, making it the streaming giant’s most successful show ever. The show is so popular that it’s spawned viral TikTok trends (naturally), debates about the ethics of subtitles, and, of course, merch—Netflix recently rolled out Squid Game t-shirts and hoodies emblazoned with the show’s logo and key images from the series, keeping fans engaged with its popular e-commerce site.

Squid Game’s massive success highlights young consumers’ growing interest in content focused on other cultures and countries, which is giving young consumers a new appetite for international media—and which we explored in YPulse’s Borderless Culture trend report. But the influence of international culture can be seen elsewhere on their list of biggest pop culture moments, including BTS (and the rise of Korean culture in general) as well Britney Spears’s conservatorship / Free Britney movement and the Friends reunion, which underscore how prominent American culture is in Western Europe. The MET Gala, too, was a major social media blitz across the globe, with a seemingly endless stream of memes making the once-exclusive event more accessible (and more enjoyable) to a wide swath of people—including young Europeans—and became a perfect example of how young consumers are remixing old-guard events for a new definition of pop culture.